If you turn on the TV, there’s a good chance you’ll see Samuel L. Jackson ask, “What’s in your wallet?”  We’re more interested in the question, “What’s in your library?” One of the benefits of a flying club is the camaraderie and sharing knowledge amongst the members. That includes suggestions on what to read to improve your piloting skills.

Asking what’s on a flying club’s bookshelf assumes a few things. First, it assumes the club has a clubhouse or an appropriate place for a bookshelf. Some clubs do, but other clubs might not have the physical space for a bookshelf but might have a virtual bookshelf. That can have two meanings. One could literally be a collection of digital books for a tablet or kindle—or the virtual bookshelf might be more of a lending library of books members might share or recommend from their personal collections. 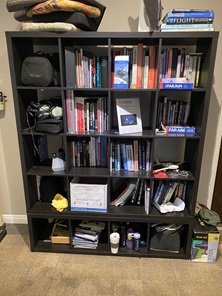 Sharing digital copies of books is a little tricky, but it is possible. Some digital books can be loaned to other people after they have been purchased, but unfortunately many digital books can’t be shared. It’s up to the publisher to allow loaning a book and how long it can be loaned. This article explains how to share a digital book.

See this month’s Question of the Month for more info on these resources and other good books.

It's also common for clubs or FBOs to have copies of training books produced by Gleim, Jeppesen, the King School and others. A bookshelf might include these tried-and-true training materials, as well as other aviation reference books.

Among the books a club might consider are Rod Machado’s How to Fly an Airplane Handbook, Robert Buck’s Weather Flying, and Max Trescott’s G1000 and Perspective Glass Cockpit Handbook (see this month’s Resource Spotlight). Weather Flying is a classic that provides a practical understanding of weather, how to make good judgements and fly safely. It has been updated several times since its original publication to incorporate information about modern technology found in cockpits today. 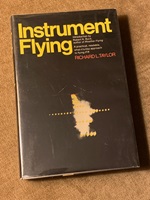 It would be good to include books on IFR flying, including Richard Taylor’s Instrument Flying, which was first published in 1972, and like Weather Flying, has been updated over the years to incorporate advances in avionics and flight systems. The book covers everything you need to know about flying IFR, such as proper communications, filing flight plans, enroute procedures and types of approaches. It includes a glossary of aviation terms and has proficiency exercises.

Besides the books that help improve piloting skills, a club might consider coffee table sized books chock full of great photos and information about aviation history including, Flight, 100 Years of Aviation; History of Aviation; and The Great Book of WWII Airplanes.

For club members looking to learn more about some of aviation’s greatest pilots, include Bob Hoover’s autobiography Forever Flying and Yeager, Chuck Yeager’s autobiography about his accomplishments and adventures during his storied career.

These aviation legends weren’t the only pilots to have adventures that make great reading. Max Trescott said one of his favorite books to recommend is Flight of Passage by Rinker Buck. It’s the true story of when a 15-year-old Ricker and his 17-year-old brother Kern bought a beat-up Piper Cub for $300, restored it and flew from New Jersey to California in 1966. It’s got plenty of seat-of-your-pants flying adventures as the brothers go on a journey to discover the country and themselves. It’s one of my favorite aviation books as well.

Roger Harris, the Vice President of the Blue Sky Aviation Association, a flying club based at Solberg Airport (N51) in New Jersey shared some of his favorites, many of which often land on lists of best aviation books. Among them are:

Another author whose aviation writing I’ve always enjoyed is Antoine de Saint-Exupery. Although he is best known for his book The Little Prince, he wrote several books based on his experience as a pilot for the French postal service, Aeropostale. Saint-Exupery pioneered many routes between Europe, Africa, and South America, flying in open cockpit biplanes in the 1920s and 1930s. Among them are Southern Mail, Night Flight and his memoir, Wind, Sand, and Stars, which features his crash in the desert in North Africa. The book explores the themes of camaraderie, friendship, and life, while providing a window into the daily routine of an aviation pioneer.

There are many good aviation books that club members can read to build flying skills or satisfy your aviation itch when winter weather may keep you grounded. Whether your club has a physical bookshelf from which you can choose a title or members share what is in their personal library, there are countless books to expand your aeronautical knowledge and satisfy your sense of adventure.