Amanda Poole is political science major in her junior year at Clemson University. After interning for a State Representative, Amanda knew she didn’t want a 9 to 5 job. So, she thought, “Why don’t I do something I'm really passionate about. Why don’t I become a pilot?”

Her first step on that journey was to join the Clemson Flying Club, which she did last semester. She learned about the club from a friend’s mother who flies for Southwest Airlines. Soon after joining, Amanda was elected as the club’s marketing director. “My whole point of being in the flying club is to make connections with people that are in the aviation community and learn as much as I can,” Amanda said. 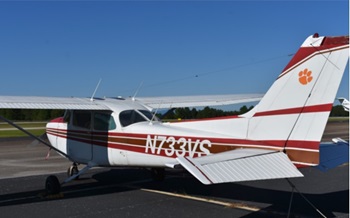 Club President Nolan Howard is a computer engineering student who also is a junior at Clemson. He had a different reason for joining the club. He earned his private pilot’s license right before graduating high school. At the end of his first semester at Clemson, Nolan learned about the flying club and joined the next semester, primarily so he could have a way to fly and stay proficient.

Although Amanda and Nolan had different reasons for joining, the club meets both of their needs.

The Clemson Flying Club was founded in 1927, making it one of the oldest collegiate clubs in the country. When Lindbergh successfully completed his solo flight across the Atlantic in May of that same year, he captured the world’s imagination about the possibilities of aviation—and people wanted to share in the exciting world of flying.

Among those excited about flying were seven Clemson students who designed and built their own airplane, “little 372.” The design didn’t fly well, but it was a start. That first club plane now hangs in the State Museum in Columbia, South Carolina. Because of a hiatus during WWII, the Clemson Flying Club can’t claim the title as oldest continuously operated university flying club, that title goes to Georgia Tech’s Yellow Jacket Flying Club, which was founded in 1946 (see Event Spotlight). 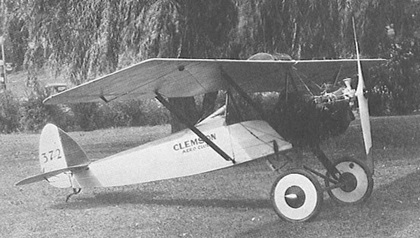 In early September, a new constitution was adopted which outlines three purposes for the Clemson Flying Club – allow members to maintain and develop flying capabilities; create educational outreach programs and events for the Clemson community; and foster a friendly community for those who share an interest in aviation.

“The club has gone through ups and downs,” Club President Nolan Howard said. “We wanted to be set up for the long run to have a solid Constitution that was more current.”

Clemson reached out to the Georgia Tech Yellow Jacket Flying Club and used its constitution as a model. One of the big changes was splitting the club into two separate entities. The Clemson University Flying Club is a student organization that gets funding from the university like any other student club on campus, and the Clemson Flying Club is established as a non-profit organization that owns and operates the aircraft. The board of directors of the club is made up of five students and four non-students. 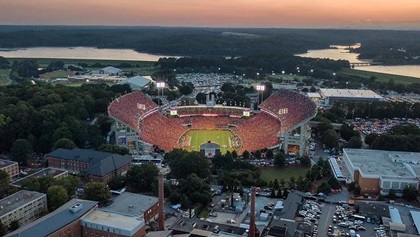 The President, Vice President, Secretary, Director of Membership, and Director of Marketing are required to be students and they serve in the same capacity with the student organization. The other positions, including the Directors of Flight, Maintenance, Finance, and Philanthropy, are non-students.

Besides updating its constitution, the club has taken on several initiatives to fulfill its mission of creating pathways into aviation for members of the Clemson community. One of the first things they did was rebuild the website, which was outdated. Now the site is easy to navigate and has information on the club’s history, the fleet, useful documents and membership information.

In addition to the website update, the club has undertaken a few things to reach out to the broader university community to hopefully increase interest in aviation and perhaps add new members.

One of the club flight instructors worked with the university to create an “Introduction to Aviation” class. This semester is the first time it is being offered and the demand was so great that it was increased from 24 students to 30. Amanda was fortunate to get in. “It's all about studying and preparing students for their private pilot written exam,” she said. “This week we’re planning on going to the airport and Nolan is going to be there to show us the inside of the plane and how everything works.”

While the class has a limit on how many students can participate, the club is undertaking another new offering for the university—a virtual reality flight simulator that is being set up in the student center. A prospective member had a yoke and pedals for Microsoft Flight Simulator that were brand new and he donated them to the club.

“Clemson has a space on campus where they have a whole virtual reality room, and Microsoft Flight Simulator supports VR,” Nolan said. “In order to get the most use out of it as possible, we’re in the process of setting up the VR simulator on campus so all Clemson students can use it. Hopefully, that will be a good way of getting students interested in aviation.” 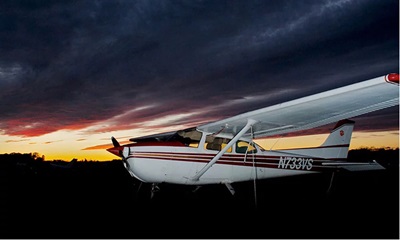 Although the VR simulator is new to the club, it’s not their first simulator. The club has an FAA-approved ELITE Simulation Solutions PI-135 XTS Basic Aviation Training Device (BATD) in their clubhouse at Clemson-Oconee County Airport (CEU). It's free for any club member to use, whether they are a flying member or not. However, if a member uses the simulator to log time for IFR or other training, there is a $30 an hour charge.

Another new program the club has created this year is a special membership to attract Air Force ROTC students. The cadets are paired with an instructor and the program is designed to help them get at least 10.1 hours of flight time. Having more than 10 hours will boost a cadet’s application for a pilot slot.

The club hosts several functions throughout the school year, and is active during Fall, Spring and Summer semesters. There are monthly meetings held on campus, which are a good way for people to network, Nolan said. They also have an annual picnic at the airport and have regular plane wash days.

“One of our goals for this year is to do more with the community so we can have more alumni involved,” Amanda said. One of the activities they were planning was a night at the clubhouse located at the airport to go through all of the club’s old records. The hope was they could get names of alumni that can be added to their Facebook group as a way to reach out to them.

Besides events for the Clemson community, the flying club participates in joint fly-ins with the Georgia Tech Yellow Jacket Flying Club. Typically, members from both clubs will fly (some drive) to a local airport and have a BBQ, play games, and enjoy the company of other students who are pilots or interested in aviation. 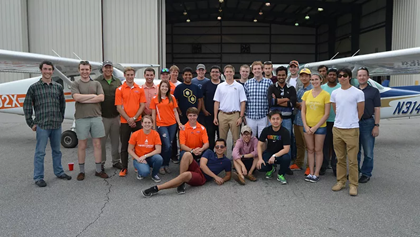 Flying clubs that are part of the university community, like the Clemson Flying Club, offer students, staff, faculty, and alumni a pathway into aviation. For most of the past 100 years, students at Clemson have had the opportunity to meet other young people interested in aviation through the flying club and gain access to aircraft at a reasonable cost—something extremely helpful when on a student budget. The club also creates a natural bridge to mentors in the aviation community through networking and alumni.

“I don’t have a huge connection to the aviation community,” Amanda said. “Networking with pilots is my whole reason for being in the club. I want to learn as much as possible and soak up information like a sponge.”