Saturdays for most students at Georgia Tech, Clemson, and the University of Georgia means football. But for a handful of students at those schools, at least one Saturday this fall is all about flying.

On October 17, flying clubs from the three universities will hold a joint fly-in where they will have a BBQ, challenge each other in a spot landing contest and a water balloon drop, and enjoy the camaraderie of fellow college students and alumni with a passion for aviation.

“You have to take a step back and appreciate how unique it is,” Georgia Tech Yellow Jacket Flying Club President Alec Liberman said. “We are some of the youngest pilots out there. What makes it all the more special is when all of us from different schools, different hobbies, different majors, different parts of the country, all gather together to just have fun and share planes.”

The club will fly all four of its aircraft to the event and other club members will drive in. The same is true for the other schools. It’s possible to get 15 or 20 people from each school – as long as there isn’t a home football game. 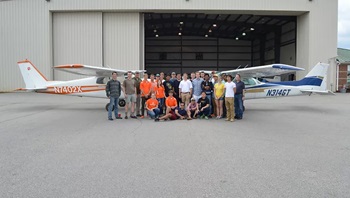 The Yellow Jacket Flying Club is the oldest continuously active university flying club in the country. It was founded in 1945 and today has 180 active members and a fleet of four Cessna 172s that all have 180-hp engines. Students pay $20 a semester, and faculty, staff, and alumni members pay $40 a semester. The club is about half students and non-students.

The club’s purpose is “to provide opportunities for students, alumni, faculty, and staff to develop their interest in aviation” and the website talks about how the club has “a rich history of promoting aviation interest and education within the Georgia Tech family, and its members have helped shape the face of aviation in the Atlanta area.”

The club is actually two entities – a student organization, which receives university funding, and a non-profit flying club, which owns the aircraft. The executive committee is made up of students who serve as president, vice president of programs, vice president of membership, student treasurer and secretary. Traditionally the corporate treasurer, vice president of maintenance and chief CFI are non-students because the positions require more time than most full-time students have. The members-at-large are appointed by the president, and Alec chose grad students who have previously served on the executive committee while undergraduates.

Some members join the club with the goal of earning advanced ratings. “But a lot of them simply join because they want to learn more about airplanes or be surrounded by people who are AvGeeks,” Alec said.

Alec falls into both categories. He earned his private pilot’s certificate the day after his 17th birthday, added an IFR rating his senior year of high school, and got his commercial license about a week after graduating. The summer after his first year at Georgia Tech he became a CFI and two months later became a CFII. He didn’t stop there. He added a seaplane rating the summer after his sophomore year and his multi-engine rating in the fall of his junior year. 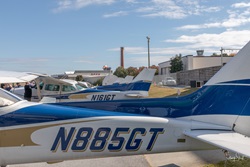 Given his passion for flying and desire to study aerospace engineering, choosing a college with a strong aerospace engineering program, and a flying club wasn’t too surprising. Alec liked the idea of living in the Atlanta area and being a part of a very strong flying community. “The Yellow Jacket Flying Club was really just the icing on the cake,” he said. “It is a big part of why I came to Tech.”

The club is extremely active. In 2020, the four aircraft logged a total of 3,380 combined! That’s an average of 845 hours per plane. “These airplanes are booked non-stop,” Alec said. “If you want to book an instructional flight less than a several days out, good luck.”

Whether members are flying or not, they are often at Peachtree-Dekalb Airport (PDK), which is about a 15 to 20-minute drive from campus and accessible by MARTA, the public transportation system in Atlanta.

The club has a goal of washing each plane once a month, and when they do have a plane wash, members often turn it into a larger event. There is a grill behind the fence near where the four aircraft are tied down, so a plane wash will often turn into a grill day. 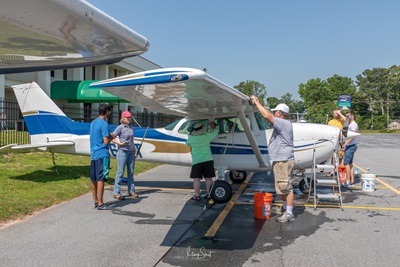 Away from the airport, there are weekly meetings on campus that often have guest speakers or presentations. In the past they have had the former chief medical officer for the NTSB talking about aero-medical factors that affect pilots and representatives from Hermeus, an Atlanta-based company that recently won a contract with the Air Force to develop a Mach 5 aircraft.

The club also draws on the knowledge and experience of its club members. Several members have seaplane ratings and once a semester they will give a presentation explaining the technical side of how seaplanes work. Rather than focusing on the operational side of flying a floatplane, the presentation delves into the engineering behind how floats work.

Alec said one of the benefits of the club is the alumni involvement. “We have a really good balance between alumni and students,” he said. “There is always someone you can go to if you have questions, even about non-flying things, who is ready and willing to help another club member.”

As a senior beginning a job search, Alec reached out to aerospace engineers he knew in the club for guidance. “They gave me a whole bunch of tips that had nothing to do with flying,” Alec said. “It had to do with professional resume formatting.” 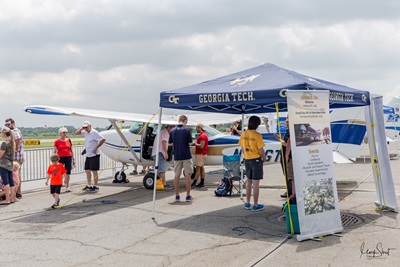 The Yellow Jacket Flying Club, like other flying clubs that are part of a university, offer students, staff, faculty, and alumni a way to connect with one another through a shared interest in aviation. Annual fly-ins with other university flying clubs provide a way for the next generation of aviators to meet, have fun together, and build the relationships that will lead the aviation industry in the future. The various events provide an opportunity to learn about aviation and non-aviation topics, and enjoy the camaraderie that comes with sharing a passion.

“The club does a good job of focusing on both airplane flying content as well as non-pilot specific content,” Alec said. “I think the club strikes a great balance of being open to non-pilots. I think that's something really unique about the Yellow Jacket Flying Club as opposed to other clubs.”