Walter McElveen lives in South Carolina, about 30 miles south of Myrtle Beach. Todd Sprague lives in Maine about 10 miles from the border with Canada, about as far north as you can go in the United States.

Although Walter and Todd live almost 1,000 miles apart, they have a few things in common. They are both pilots, they both had limited access to aircraft, and they both founded flying clubs this year.

But there is something different about the clubs. Walter’s club, Wings Over Winyah Flying Club (WOW) based at Georgetown County Airport (GGE), is an equity club that owns its Cirrus SR20. Todd’s club, the Northern Maine Flying Club based at Presque Isle International Airport (PQI), is a non-equity club that leases its Cessna 172. This is the story about how each club was founded and the benefits of the different aircraft acquisition methods they chose. For a detailed look at the pros and cons of equity versus non-equity clubs, see the November Question of the Month.

When Walter began having meetings with people who were interested in forming a club, they initially wanted to create a non-equity club. “We looked at leasing [an airplane] first because of costs,” Walter said. “Our buy-in fee would be much, much lower.  We would be financing one year at a time rather than the buy of an entire airplane. That was the attractive thing.”

There was one problem. The club couldn’t find an owner who was interesting in leasing to the club. “We called flying schools. We talked with people who we thought might be selling their airplanes and asked, can we lease your airplane?” Walter said. “We just didn't find anyone that was willing to do that. It turned out we were more into the equity membership simply because that was the only thing available for us.”

The founding members began discussing what it would take to buy an aircraft that met the criteria they established for the club—something safe, modern, economical, fun to fly and comfortable. Members wanted a capable cross-country aircraft with an autopilot.

They set the initial budget at $150,000 and quickly realized, “we couldn't get all these things that we had on our sheet for $150,000 – the comfort, the cross country, the autopilot, something modern—all started going away,” Walter said. So, they decided $200,000 was a good budget and that a Cessna 182 could do everything they wanted.

“We started looking and saw the prices of those airplanes just go through the roof. They went from $175,000 to $225,000 it seemed like in a week,” Walter said. “Then we saw the availability of them starting to really go down. The supply and demand was against us at the time. By the time we found the one we wanted we were over $250,000.”

The members asked themselves if they wanted to spend that much. The answer was no. And then someone suggested for that kind of money they should look at a Cirrus. They weren’t sure you find a Cirrus for $200,000. “We started looking into it, and lo and behold we could.” The airframe parachute addressed the club’s primary criteria—safety—and really appealed to club members’ spouses and family members. They also knew a Cirrus would be modern, comfortable and economical, burning about 10 gph in cruise. The club hired a professional Cirrus buyer who found an airplane that would do everything they wanted and it was $200,000.

“The used Cirrus, the Generation 1, are now affordable to flying clubs,” Walter said. “That was the best decision we made for us. It gives us the modern, comfortable, safe, cross-country airplane that is fun to fly locally. It serves all our purposes. We're enjoying it.”

The Benefit of an Equity Club

Perhaps the biggest benefit of the club owning the aircraft is the certainty it brings and the ability to do long-range planning. If the club leased an aircraft, the members of Wings Over Winyah were concerned that after a year the owner may decide not to renew the lease. That would leave the club without an aircraft.

That's when they decided they’d rather be an equity club so they could own the plane and control it. “For the club, it was much easier knowing that it's our airplane,” Walter said.

Another benefit is the idea of upgrades. In fact, the club has already replaced the autopilot with an Avidyne DSC 90 that matches well with the other Avidyne equipment in the airplane. The Challenge of an Equity Club

The biggest challenge of an equity club is the higher cost of entry for members. WOW has a buy-in of $6,500 per share with the club capped at 10 members. Dues are $250 a month. As the club was forming, raising the capital was a bit of an issue.

“We didn't have our 10 members to go out and buy an airplane. So it was really a belly up to the bar moment for all of us, and how big is your pocketbook?” Walter said. The club had five committed members, and Walter was certain that if they had an airplane the club would take off.

“What we'll do is we will pretend,” Walter said. “We'll go ahead and pay for those extra memberships and as members come in, we’ll just be paid back by the club.” So, all five initial members bought two shares each and are being reimbursed as new members join until they have all 10 members. “That was a big aha moment when we got together and decided to do that. We were lucky to have some members who are able to help with that.”

The club also obtained a loan from the local bank. It was the first time the bank had done a loan for an aircraft purchase, but it was willing to take the risk because many club members were existing customers who had their business and mortgages at the bank.

The club became operational in June and has since added two more members bringing the total to seven. Most of the flying so far has been getting everyone checked out, but the plane has done a number of cross-country flights.

The club bought a map of the entire country and each member has a different color pin. Whenever they visit a new airport, they put a pin in it and then write a little bit in a notebook in the hangar. The book serves as a log for other members to see where the plane has been, and to get a sense of the facilities, fuel costs, etc. at the different places that members have visited.

Todd’s experience starting a club and finding an airplane was a little different than Walter’s. A friend of Todd’s knew of a plane for sale and approached him since he knew Todd was looking to do a little something on the side. He bought the 1961 Cessna 172 in October 2020 with the intention of starting a club with the purpose of supporting a Mission Aviation youth camp. See this month’s Event Spotlight.

Todd knew he couldn’t afford to operate the plane by himself so he founded the Northern Maine Flying Club and leases the plane to the non-profit organization. As the aircraft owner, he doesn’t hold a voting board position because it would be a conflict of interest. He is, however, involved in the operations of the club and has a good working relationship with the board.

“I have a friendly lease with the club and they cover all of the maintenance costs,” Todd said. “The board runs the club based on the guidance that I got from AOPA. They run the club just like they own the airplane. The cost of the lease is fairly low and my goal is not to make money. The goal is to further the aviation interest of the community and to feed the activity of the airplane and the events. It's definitely a good working relationship.” 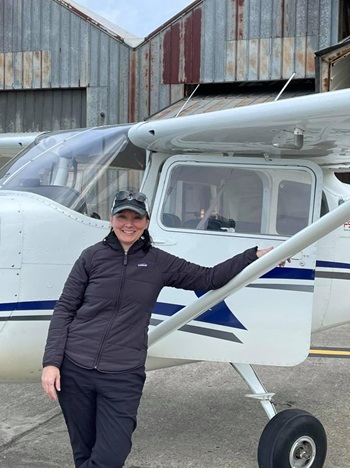 The Benefit of a Non-Equity Club

Perhaps the biggest benefit of a non-equity club is the lower cost of entry. Northern Maine has nine flying members that pay a $2,000 buy-in.  Dues are $100 a month.  The club also has 15 social members who pay $100 a year in dues.

“For the members that use the airplane, they’re getting a very good bang for their buck,” Todd said.  “You can't go anywhere and get the same value for the money. It's quite economical.”

The Challenge of a Non-Equity Club

One of the potential challenges is the issue of upgrades. While some non-equity flying clubs take responsibility for all maintenance, most negotiate maintenance responsibilities with the owner—see the March 2018 Question of the Month for more details. Improvements and upgrades typically fall to the aircraft owner. If club members want to upgrade avionics, they would need to discuss it with the owner and come to an agreement. Most likely when improvements are made, the cost of the lease would go up when it was time to renew it. In Todd’s case, he has an agreement with the board that any improvements would be done collaboratively. “We will work it out together,” Todd said. “It's not like I'm going to hijack the plane and put a bunch of radios in and charge them more because I decided that I wanted a fancy new Garmin stack. Everything we do is going to be together.”

The plane has a basic six pack and an older IFR-rated GPS, but Todd said it's not fancy. It serves the club’s purpose just fine. In fact, instead of upgrading the plane they have now, the club is already considering the possibility of getting a second airplane in a year or two that is better equipped and keeping the current one for more local flying and training.