Flying Clubs Club Connector Newsletter Club Spotlight: Try it on for Size—There’s a Club that’s Just Right for You

Club Spotlight: Try it on for Size—There’s a Club that’s Just Right for You

The Jersey Aero Club is based at Lakewood Airport (N12) and is the third oldest flying club in the United States, starting operations in 1938. The Princeton Flying Club based at Princeton Airport (39N) was formed in 2015. Both clubs are based in New Jersey and both provide affordable access to aircraft.

But that’s where the similarities end. The Jersey Aero Club is a large club with almost 140 members and a diverse fleet of six aircraft. The Princeton Flying Club is a small club with one plane, and is capped at 12 members.

Whether large or small, there are advantages and challenges to both. Neither model is better than the other – it’s just a matter of preference on what fits you best. Among the obvious differences are the number of aircraft and members and how those two things effect club dynamics.

“The good news is we have a lot of members, but that also presents more challenges” Jersey Aero Club President Jeff DuBois said. The amount of management required is significant. When you choose to be a bigger club, well defined processes, roles and management are needed along with more volunteers to support the club.”

The Jersey Aero Club operates six aircraft – a Piper Warrior, a Piper Archer, and a fixed-gear Saratoga, along with a Cessna 172 and a Mooney M20J. An additional Piper Archer was recently purchased and the club is in the process of overhauling the engine and avionics before it will be put on the line.

Having a diverse fleet provides aircraft for a variety of missions, which may attract members who want access to a specific aircraft. For instance, the Mooney is a fast and fun aircraft well suited for cross-country flights, and several members have joined just to fly the Mooney [See this month’s Aircraft Spotlight]. Similarly, the Saratoga provides a six-seat option for those who have a need for more seats or useful load – something most FBOs that rent planes don’t offer. 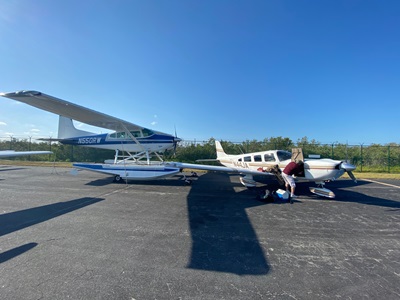 Having a large fleet means members generally always have access to an aircraft. If an aircraft is down for maintenance or another member is out flying, there is usually another aircraft available.

In a single-aircraft club, if the plane is down for maintenance, or it is being used by another member for the entire day or weekend, flying opportunities may be limited. Even with a single Cessna 172, Princeton Flying Club Treasurer Tom Pollack said members have not had problems scheduling the plane. One of the reasons is their low member to aircraft ratio, the club also has members who mostly fly on weekdays.

To manage the club and the fleet, the Jersey Aero Club board consists of four officers – President, Vice President, Secretary and Treasurer, along with six other board members. The club also has six trustees appointed by the board who are each responsible for an airplane. Any member who has an issue with an airplane is supposed to contact the aircraft trustee who will take care of the issue or explain to member what the situation is. The six aircraft trustees report to a fleet trustee, with some of the aircraft decisions made in concert with the fleet trustee.

“There has to be some sort of a hierarchy with an organization of this size and that presents its own challenges,” Club Treasurer David Williamson said. “There is no such thing as a perfect management structure. The best thing you can do is come up with a structure where you understand what the disadvantages are of that structure, and then you work to mitigate those disadvantages.” 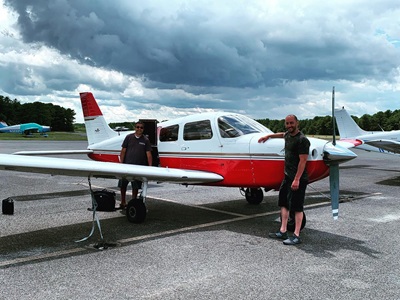 The club also has five committees – a Finance and Audit Committee that is responsible for overseeing and checking the budget, a Membership Committee that interviews all new members as part of a robust screening process, a Publicity Department that manages social media and the club newsletter, a Safety Committee to help formalize and maintain the club’s safety culture, and a Rules Enforcement Committee comprised of longtime members that make sure everyone is following the bylaws.

The rules committee can assign fines to members who break the rules and the fine list is posted (without names). More often than not, the fines are more for education and not punitive, and are meant to correct issues, such as improper tie-downs, forgetting to lock the door or put a pitot cover on, arriving late, or not showing up for a scheduled flight. A typical fine is $10, but they can go as high as $100 for a serious violation, like flying out of currency, which is unusual.

“We can't just let things go because with so many members, if [our club newsletter editor] Sonja forgets to do one thing, and I forget to do something else, and Jeff forgets to do something else, then it's just chaos,” Dave said. “They're not really there to be punitive, they're just there to say this is part of your responsibilities as a member of the club and a part owner of this airplane.” 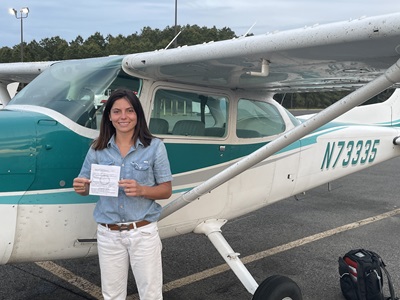 Sonja Wosnitzer, who joined the club this past November after earning her private pilot certificate and recently completed her IFR training with the club, said the fines “help in the standardization of processes with such a large membership. It's quite different than having 10 pilots that can discuss proper procedures.”

The Princeton Flying Club doesn’t need to have such rules or procedures because it only has 12 members and a single Cessna 172. They have five officers – a president, vice president, treasurer, secretary and maintenance officer. They meet at least four times a year and if something comes up that needs to be addressed, they will meet more often, Tom said. The club requires a quorum of seven members to be able to vote and take action.

With a small club, they have the flexibility on scheduling meetings. What they do is send an email with a few dates and times to see when members are available. Whatever time gets a quorum is when they will meet. They also have set up virtual voting in which the issue or question at hand is sent out and members have a week to vote. If a member does not vote, the club rules state that non-vote becomes a vote in support of the president’s position. 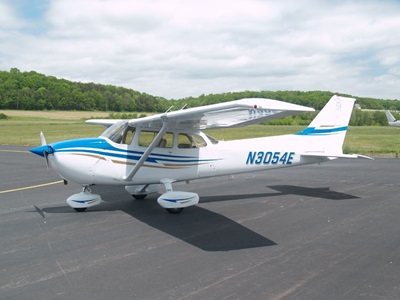 The Princeton Flying Club also has a less formalized communications structure. With only 12 members, five of which are on the board, there isn’t a need for a newsletter to keep everyone connected. Instead, they have a Google Group account in which they can send an email, which everyone gets and can respond to. The club also uses Doodle, a free survey software, whenever they want to poll the members.

The monthly surveys are typically between five and 10 questions so they don’t overwhelm the members. The response rate is remarkable, coming in consistently between 57 percent and 65 percent of the 137 members.

To keep everyone engaged and in the loop, the Jersey Aero Club publishes a monthly newsletter called the Vortex. It used to be printed and mailed. Now it is posted online. Sonja is the editor and created a new feature that spotlights a different member each month.

“It is a really great way for me to get to know members better and introduce new members to each other who may otherwise never meet,” Sonja said. This was particularly important during the pandemic when meetings where held virtually and there were not opportunities for members to be together.

Camaraderie is a key aspect of any club. In a smaller club, like Princeton, it’s easy to know all of the members and build bonds with each other. One way they do that is by using the shared flight feature in their online scheduler, aircraftclubs.com. A member can put a flight in as a shared flight and other members can see that and choose to join.

In a larger club, it is naturally going to be more difficult to know each member. However, there will be greater diversity among the members in terms of professional backgrounds, flying experience, and diversity.

“I found it’s not only a great place to fly great airplanes, but a great place to meet really high-quality people,” Dave said.  “I've made so many friends through the club and so many business connections.”

The diversity in professional backgrounds can be asset to a club. For instance, Sonja has a marketing and photography background – skills well suited for a newsletter editor. And Robert, the member who runs the surveys, has a background in market analysis so he knows how to put a survey together with standardized questions that can measure trends month to month, as well as new questions on topical issues. He then takes the results and produces an analysis of the data that is presented to the board.

“We're a very welcoming club,” Jeff said. “I think people feel comfortable very quickly in how we conduct ourselves and I think that speaks a lot to the club culture.”

Whether the club is large or small, members share a pride in being associated with a good organization. In a newer, smaller club like Princeton, members have the opportunity to build that culture and leave their mark on the organization.

At a larger club with the history that Jersey Aero Club has, members have a desire to continue that legacy. “One of the reasons I think all of us care so much about the club is you feel a responsibility to take care of it for the next generation,” Jeff said. “The club has done so much for me, both in terms of aviation as well as personally with friendships and comradery. I feel a tremendous desire to hand this off to the next generation of pilots and see them have the great experience that I did.”