There’s a little bit of an aura to the Mooney M20J. It’s sleek, it’s fast, and it’s got ramp appeal – and it’s a good platform for a mix of missions. The Jersey Aero Club has operated a Mooney for decades as part of its six-aircraft fleet and couldn’t imagine not having one in the club.

The M20J sits low to the ground and its smooth curves and forward swept tail give it a distinctive look that’s hard to miss on the ramp. “The airplane has the wow factor,” Jersey Aero Club President Jeff Dubois said. “You feel like you're in a sports car.” 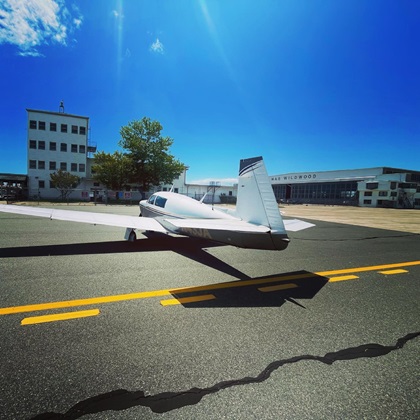 Treasurer David Williamson said the plane is a very popular with members and it’s the reason some members join the club. The Mooney can serve as a complex trainer for members working on their Commercial rating, and provides a fast, well-equipped platform for cross-country flying.

It’s fast and it’s fuel-efficient. John usually flight plans 135 knots indicated with a fuel burn of 9 gph, but Mooney Aircraft Pilots Association has performance specs showing a cruise speed of 160 knots true with a fuel burn of 11.5 gph. Flying at 55 percent power, you can lean it out to burn under 8 gph, John said .It has a 200-hp fuel injected IO-360 and the aircraft averages about 11.3 gph, all while cruising between 155 – 160 knots.

Maintenance (3 out of 5)
With retractable gear, an annual will cost more than a comparable aircraft with fixed gear, but its Lycoming IO-360 is a common engine so most mechanics are familiar with it and parts are available.

In 2020, the club spent $17,500 on maintenance. However, about $5,300 of that was for fixed expenses – database updates, transponder and static system checks, and anything that has to be done based on time. They also did a lot of additional work last year that wasn’t required but they wanted to get done.

Dave said there isn’t much that makes maintaining a Mooney unique. But he added the club uses a shop that specializes in Mooney’s, so there may be things they aren’t aware of since the mechanic is knowledgeable and takes care of anything that needs to be done. One thing that is a little different is the club’s plane does have a landing gear Instruction for Continued Airworthiness (ICA) that goes with a landing gear modification STC. The ICA requires an inspection every six months, but fortunately isn’t very costly. Jeff also said Mooney owners should watch for fuel tank leaks.

Insuring the Mooney isn’t a problem. For its hull value, insurance premiums are in line with other aircraft of similar value, Dave said. The club has used the same broker for decades and they have a very good relationship, resulting in competitive rates and no deductible because of the club’s good record. For the liability limits, the club carries a $1 million smooth policy.

The club requires members to have 150 hours minimum to fly the Mooney solo. Those with less than 150 hours can fly it with an instructor, and some use the aircraft for advanced training. 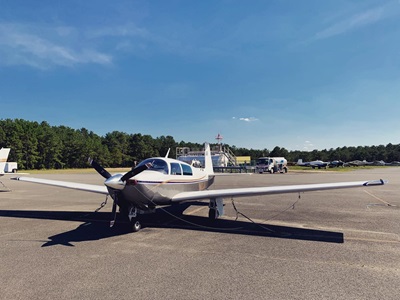 With retractable gear and a 200-hp engine, the M20J is well suited for working on a commercial rating. Although with changes to the commercial requirements that no longer include retractable gear, it isn’t as important. “Predominantly the plane gets used for IFR training,” Jeff said. “It’s an outstanding platform.” Dave also noted that “the Mooney is a very slippery airplane to do the commercial maneuvers in.”

There are some things to understand about flying a Mooney. “The biggest issue is slowing it down and getting comfortable with the differences in the stall,” Jeff said. The Mooney builds up airspeed quickly. “When a wing drops on the stall, if you're not coordinated, you just don't mash on the rudder in a Mooney. It's more of a tap.”

It’s also important to keep the M20J within the speeds. You don't want to get too slow in it and you always want keep it coordinated, Jeff said. “The bottom line is that you just have to live by the numbers. The numbers are everything in that airplane.”

Dave added, “I want to emphasize that you really have to plan ahead for your descents because that airplane does not like to slow down.” The plane needs time to lose altitude and speed. One technique Dave uses if he needs to lose speed quickly is to pull the nose up to get below gear extension speed and drop the gear. “That really helps slow you down. That makes the airplane much less slippery,” he said. “And if I really have to get the speed down, I'll get below flap extension speed and put the flaps down as well. Then drop the nose and come in with a significant amount of drag that helps a lot.”

Dave said the airplane is very sensitive in pitch and you have to avoid chasing the vertical speed indicator. He also mentioned the need to be more aware with your trim, particularly in situations where you have less control authority, when you are going slow, like on landing or takeoff.

“On a Piper, the trim just moves a little tab on the back of the stabilator,” Dave said. “On the Mooney, you're actually moving the horizontal stabilizer. And if you have full up trim and you're very slow, and you put in full power like on a go around, the airplane may become uncontrollable because you don't have enough elevator authority to push the nose down.” 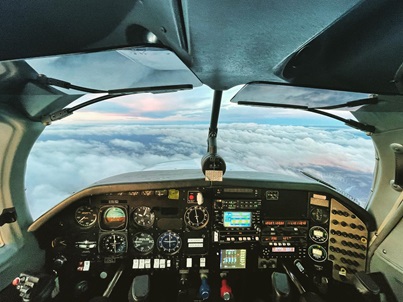 Mooney’s have a reputation for getting you where you want to go quickly and efficiently. The M20J holds 64 gallons of usable fuel, so it has a range of about 700 miles with a useful load of about 850 pounds or two adults with bags. The Jersey Aero Club typically plans for 155 knots to 160 knots cruise speed with about an 11 gph fuel burn. “That's pretty fast for general aviation,” Dave said.

“If you look at the schedule, it goes on a lot of trips,” Dave said. “It’s very economical,” Jeff added. The plane regularly goes to upstate New York, Maine and Florida. “If you go to Maine, that's the plane to fly, because it’s 2 hours, 45 minutes wheels up from Lakewood to Bangor or Bar Harbor.” It’s a stable platform and the Jersey Aero Club Mooney is equipped with a two-axis autopilot that makes longer trips or flying IFR easier.

“You sit in it like you're in a sports car. The seat is kind of low, you’ve got your legs out in front of you and it just has a different feel to it,” Dave said. “You feel like you're sitting a sports car.”

He also said he thinks the Mooney has made him a better pilot. “When I first started flying the Mooney, I felt like things were happening so fast compared to other airplanes because you're going faster. It took a bit to get used to that, but now I find that I am a much better pilot because of that.” One thing is for certain, a Mooney will turn heads on a ramp. ““There's something about flying a Mooney. There’s a little bit of an aura to them.” Jeff said.

If your club is looking for a fast cross-country performer with reasonable operating costs that can also serve as a trainer for pilots working on their commercial or IFR ratings, the Mooney M20J fits the bill. It’s a fun aircraft, with sleek lines, a distinctive look and sports car appeal that will definitely attract attention while serving two popular missions of many flying clubs. “It would be hard for me to imagine the Jersey Aero Club without a Mooney,” Dave said. “For me, I just l love flying the airplane.”