Why do you fly? For many pilots just being in the air is reason enough. For others, a $100 hamburger is all it takes. But there are members of several flying clubs who take to the skies for a purpose—to benefit others.

Ed Fischer is one such pilot. He is the webmaster for the Delaware Valley Aviation Flying Club based at Northeast Philadelphia Airport (PNE) and has been flying patients as a volunteer pilot with Angel Flight East for more than 20 years.

Angel Flight East is a 501(C)(3) nonprofit organization that provides free air transportation for children and adults with medical conditions who need to get to treatment far from home.  It operation between Maine and Virginia and as far west as Ohio. There are several Angel Flight organizations across the country that operate independently from each other. The organizations typically provide flights in a specific region, but there may be some overlap.

Public Benefit flying “allows me to help my neighbor in a way that not a lot of other people can,” Ed said. “Being a certificated pilot is a wonderful privilege and I think I owe it to my fellow man to make use of that from time to time. Plus, it’s fun.”

He is one of several members of the Delaware Valley Aviation Flying Club that fly patients to medical appointments or volunteer with organizations such as Pilots N Paws to fly rescue animals. The club, which was founded in 1954, operates a Piper Archer, Dakota, and Lance. It is capped at 45 members to maintain a 15:1 ratio of members to aircraft and there is a waiting list to join.

Having three aircraft in the club’s fleet provides options in terms of matching an aircraft to the mission. It also increases the likelihood of an aircraft being available. Ed prefers to fly the Lance for Angel Flights because the club seating in the back allows the passengers to stretch out and be more comfortable. In addition, it has a passenger door in the back so it’s easy for passengers to get in and out without having to climb over seats. “It’s a very comfortable plane, and it goes a little faster,” Ed said. “So why not get them where they’re going in style.” 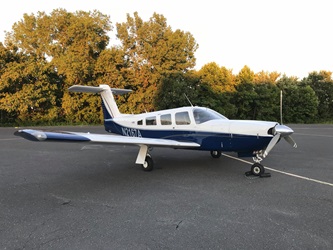 For club members who are interested in public benefit flying, there are many options. The Air Care Alliance represents volunteer pilot organizations across the country and is a great place to learn about public benefit flying and some of the groups looking for pilots (see this month’s Resource Spotlight and Question of the Month).

Some organizations require flying club members to provide proof of checkout from the Club CFI in the aircraft that will be used for the flight, as well as a certificate from the club that the pilot is covered under the club insurance policy.

LightHawk, an organization that uses volunteer pilots to support environmental conservation efforts, requires pilots have a minimum of 1,000 hours PIC because some of the flying may require low level flights, maneuvering to view specific locations, or flying a more challenging profile than simply flying point to point, like many other public benefit flights. Because LightHawk flies a variety of missions, aircraft can range from single engine pistons with one to four seats, to turboprops and jets for wildlife transport.

Pilots do not need to have a commercial license for public benefit flying. “That is a deliberate, thoughtful carveout by the FAA because they’ve determined public benefit flying is not flying for compensation,” Ed said. “You only need a private pilot’s certificate. The FAA is very good about that.”

Once a pilot has signed up with a particular organization, requests for pilots may come in the form of an email, a phone call, or a posting on the organization’s web site.

With Angel Flight East, the pilot will go onto a web site and sign up for a flight. “The staff at Angel Flight East are fabulous. They confirm you and assign you to the mission,” Ed said. “They get you in touch with the passenger. Then the pilot and passenger work out themselves here’s where I’ll meet you, what time do you need to leave, we’ll make sure you get there in time. It’s really fulfilling.”

Pilots are sent an email with a briefing sheet that includes the number of passengers, their names, ages, and weights, as well as whether they have flown in general aviation aircraft before. Ed said about half of the people he has flown were taking their first flight in a small plane. “Angel Flight does the initial intake with each of the clients, whether they are first timers or long timers,” Ed said. “They really know the clients well and they give us the briefing sheet that helps us understand their needs.” 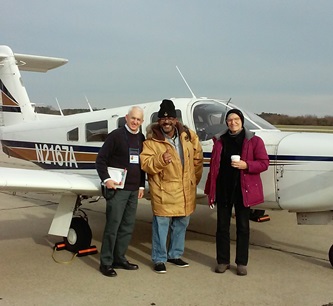 When Ed makes initial contact with a passenger, part of the process he goes through on the telephone is asking if this is their first flight in a small airplane, as well as explaining the expected weather conditions to make sure the passenger will be comfortable.

One of the most important things pilots need to remember is that they never have to make a flight. “The watch words of Angel Flight East are number one safety, and number two passenger comfort,” Ed said. “Completing the mission is further down on the list.” Angel Flight makes sure passengers have a backup plan in case a flight has to be cancelled because of weather or other reasons, so there is never any pressure to go.

“I have flown with Angel Flight passengers from every walk of life—youngsters with their parents, teenagers, middle-aged people, fairly old people, and from a lot of different places in the region,” Ed said. “One of the things about Angel Flight is it gets people from their hometown where maybe medical services are limited to major medical centers where they can be treated. A lot of the flights originate in smaller communities because that is where the need is most acute.”

Over the years Ed has flown patients from places as far north as Albany, NY and as far south as Raleigh-Durham, NC. “Because Delaware Valley Aviation is based at Northeast Philadelphia, most often that’s the destination for the missions that I fly,” Ed said. “Philadelphia is a major medical center, so a lot of the public benefit flying that I do either originates or ends in Philadelphia.” 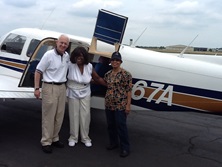 Often times, a team of pilots transports a patient and their family where they need to go on multileg flights. The passenger starts in their hometown, they get flown 300 miles to an intermediary airport, then a second Angel Flight pilot meets them and takes them the next 300 or 500 miles. Sometimes it can be two or three legs to get them where they are going, Ed said.

“The Angel Flight clients are really some of the nicest people you’d ever want to meet,” Ed said. “Some of them are in the midst of a great deal of hardship because they are taking care of medical issues.”

Public Benefit Flying in a Club

When a club member reserves a plane, they do so for whatever purpose they want. “These are individual flights by individual club members,” Ed said. Since most of the flights are picking up or dropping off passengers, the club planes are usually only needed for the day.

One of the things that may be difficult as a flying club member rather than an individual owner is that when a flight comes up, you have to have a club plane available. If someone else has reserved the plane, you may have to let another pilot take that flight.

Or you could check with the pilot who reserved the plane to see if they would be willing to switch reservation times or perhaps join you as a copilot on the flight, which Ed has done a few times.

“Nothing builds a relationship between two pilots like flying a public benefit mission together,” Ed said. “You both feel like you’re working together helping somebody. It’s really very fulfilling.”

Angel Flight, like most public benefit flying, is a volunteer organization. All the pilots are donating their time and whatever it costs them to reserve the plane for that flight. You may be able to claim the expenses as a tax donation, but you should always consult a professional account before you do.

Making your flying more meaningful by doing public benefit flying is a great way for club members to serve their local communities by using your skills and abilities to help others in need. It provides a purpose to your flying and can make a real difference for people.

“You really have to want to do it. You’re now a pilot who has a passenger in your care for that flight,” Ed said. “You do it because you want to help out.”