Club Spotlight: Learning from Mistakes is the Key for the Monticello Flying Club

We’ve all done things we wish we hadn’t. That’s true for clubs as well as individuals. The Monticello Flying Club based in Charlottesville, VA found the key to improving procedures…after making a mistake that might have been overlooked by many clubs.

The 12-member club operates a Mooney M20F and when new members joined, they were given keys to the airplane.  A Mooney has two keys—one for the door, and a second one for the engine ignition switch. “We made the mistake of handing out engine keys with the door keys to new members under the logic that they are equity members and so should get keys,” Club President Michael Vanderweide said.

The bylaws clearly state a new member is required to get a check out in the aircraft by a club approved instructor, who would provide the member with a sign-off sheet once their checkout was complete. At that point, a new member was clear to reserve the aircraft and fly solo.

Mooney’s have a reputation for being slick airplanes that can be a bit difficult to land if you haven’t flown one. So, the checkout in a Mooney may take a little more time than in a Cessna or Cherokee.

“Have you ever heard of the Mooney three bounce?” Michael asked. “If you porpoise a Mooney, usually on the third bounce if you don’t add power to cushion the landing you come nose in and bend the prop.”

The club learned the hard way that there is truth to the Mooney three bounce reputation after a new member who had not completed the checkout had an incident.

The new member was a rusty pilot. He hadn’t flown in 20 years, so he logged a couple of hours with an instructor in a flight school Cessna 172 and completed a flight review. He then flew two hours in the Mooney with a club instructor. At that point, the instructor said the member needed more work.

“Our club requires a flight review in our Mooney and a club signoff on our club's official solo signoff sheet,” Michael said.  “It is in numerous places in our flight rules and in the joining agreement that the member signed agreeing to the need for a completed solo signoff”.

This member decided for himself, without a sign off, that “needing more work” meant he was ready to solo. While doing touch and goes, he incurred a prop strike.

The plane was due for maintenance, so the mechanic had asked the line-people to tow the plane to the maintenance hangar after the member landed. The line guys called the mechanic and said, “you might want to look at this, the last inch of the prop is bent back”. 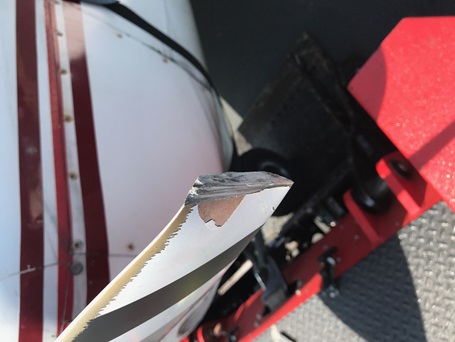 Michael called the new member to ask if he had flown the plane. He said yes, and Michael asked if he knew that he struck the prop. The member admitted it was a hard landing but said he didn’t know he hit the prop.

The member claimed he thought that when the instructor said that he needed a few more flights in the Mooney before a trip he wanted to take, that the CFI meant he could go do them by himself and that he had been approved to solo despite not having a signed and completed form. The CFI said he was very clear that those flights needed to be with an instructor.

To prevent this type of situation from arising again, the club now has the CFIs hold the engine keys. They are only given to a new member after the checkout is complete and the new member is signed off for solo. This removes any chance of confusion about whether a member has CFI approval to solo or not.

Another takeaway for the club was how it evaluates new members. The club doesn’t have a formal interview process for new members, but either the president or vice president, who also is the membership coordinator, will take prospective members for an intro flight.

“You learn a lot by doing that intro flight,” Michael said. “What their safety mentality is, what their personality is. Then we recommend or not recommend the person for the club.”

Now when they interview potential new members, they evaluate the person a little more carefully. The club requires members have their private pilot’s certificate, so they do not admit members who are student pilots.

Insurance used to require 20 hours of retractable gear time and 5 hours in type, or if you didn’t have the retractable gear time, 10 hours in type. In addition, members needed to have 100 hours PIC. The current insurance policy no longer has those requirements, but the club has maintained them since it is a complex airplane and it helps ensure the members are more experienced.

In addition, they are more careful with rusty pilots. The rule of thumb is you should fly one hour for every year that the pilot has not flown. If someone has not flown in 10 years, they should get a minimum of 10 hours of instruction.

The Monticello Flying Club had clear bylaws and required documentation for how new members could get checked out in the club’s Mooney. Despite that, the simple act of giving new members the keys to the airplane on joining the club rather than waiting until the member completed a checkout resulted in a significant incident that required an expensive repair.

The lesson learned is that even the small procedures a club implements should be well thought out and reviewed on a periodic basis. In this case, a small portion of the onboarding processes turned out to be a costly mistake.