Aircraft Spotlight: The Lease of Your Worries

There are two ways a club can acquire an aircraft—either buy one or lease one.  There are pros and cons to both ownership models. A recently formed non-equity flying club learned through experience about managing expectations and the importance of clearly defining what is (and isn’t) covered in the lease agreement.

In this particular case, the aircraft owner was a first-time lessor, and the club was a first time lessee. “This is all brand new to all of us,” the club president said, and sometimes experience is the best teacher.

Which came first, the plane or the club?

Most flying clubs generally start with a group of pilots who want to get together to create an organization to provide access to an aircraft. They determine the club’s mission and budget, and then find an airplane.

In some cases, the airplane finds the club. That’s what happened in this particular case. Airplanes “don’t do any good sitting on the ground,” the club president said. “They do better if you fly them.”

An aircraft owner approached one of his friends, who is now a club officer, and suggested this friend use the aircraft for instruction and both would benefit. The plane would be flown regularly, and both could make a little money.

The friend said no because he didn’t have the time to instruct, but he and a couple of other pilots, both who are now club officers, were mulling over buying a plane or trying to put a club together—something so they could go out and have fun, the club president said.

“Then all of a sudden the airplane materializes,” he said. In the spring of 2021, they “started going backwards trying to figure out how to make a club work.” 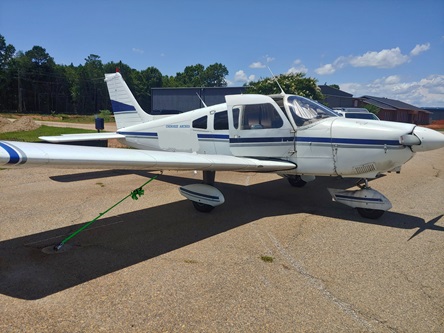 They found AOPA’s Flying Clubs resources, got in touch with Flying Clubs Manager Drew Myers, and spent the next three months putting the club together.

The airplane was going through an extensive annual, which gave them time to get the club organized and work on the lease. The club incorporated as a non-profit corporation in the summer of 2021 and they got the plane soon after.

The club founders looked at examples of other club’s aircraft leases and cobbled something together to fit what they wanted. They owners looked it over and made some edits, which the club agreed to.

“Some of the areas were not clearly defined,” the club president said. “We signed the lease with a lot of assumptions. I would caution future clubs or existing clubs if they are renewing their lease.”

Some of the items that were in writing but not clearly defined included the deposit the club made to the owner, as well as maintenance.

“The owner said he would cover major maintenance. What wasn’t clearly covered was who, what, and where that happens,” the club president said. “The minor maintenance—the recurring stuff like tires, oil, battery, the kinds of things an owner/operator can change and fix—who pays for that was never discussed.”

Another aspect that was defined were expectations for the aircraft. The club preferred replacing parts or making minor upgrades when addressing a maintenance issue, while the owner generally preferred to overhaul parts or keep the current parts rather than make improvements.

These issues arose fairly quickly after a series of maintenance issues.  The first was a bad starter caused by faulty wiring. The club wanted to replace the starter, while the owner wanted to repair it, which is what they did.

Not too long after that, the alternator failed in flight. Fortunately, the club member was able to land safely. Upon repair they found the defective part was an automotive alternator. Although the armature and coil are the same as an aviation alternator, the pully and the fan portion are aircraft specific. That is what failed—the pully and fan blades were gone.

The third incident was an exhaust leak on a cylinder. The club wanted to replace it, but the owner chose to repair it. When it was time for the annual, the compression was so low, the cylinder needed to be replaced.

The lesson the club learned is the importance of clearly defining what type of airplane you’re getting, VFR or IFR capable, as well as “who and how and what and when the maintenance gets done on the airplane,” the president said. “There’s a lot of things that should have been in our lease agreements, that were not.”

For instance, they never discussed who pays for minor recurring maintenance, like changing tires, oil, the battery—the kinds of things an owner/operator can change and fix.

Another question was could the club do this routine maintenance since it didn’t own the airplane? The answer is yes. The club talked to the FSDO and learned as the lessor, they are considered the operator of the aircraft for the duration of the lease and are allowed to do owner/operator maintenance per 14 CFR Part 43.

When the club goes to renew their lease, they plan to add language to clarify roles and responsibilities, to define who and how the club and owner will address maintenance and other issues.

“This was a learning lesson for us,” the club president said. “We assumed a lot of things.”

Hopefully, this club’s experience can be a learning lesson for other clubs as well.

For more information on clubs leasing aircraft, see the March 2018 Question of the Month.  An example lease agreement, a good starting point, can be found here.