Club Spotlight: Old and New – What a new club like Lake Shelbyville can learn from 90-year-old Reading Aero Club

Anytime you start a new organization there are bound to be some growing pains and bumps along the way, and if a flying club makes it to its 90th anniversary, it’s fair to surmise they have found ways to overcome some challenges and developed a few success principles along the way.

The Reading Aero Club in Reading, Pennsylvania was founded in 1932 and can attest to both. Its first airplane was an open cockpit Travel Air biplane powered by an OX-5 engine, which was not quite as modern as the red Lockheed Vega Amelia Earhart flew that same year to become the first woman to cross the Atlantic solo. 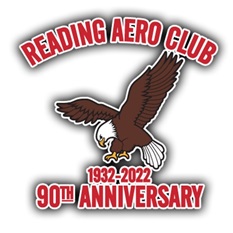 The club has been in continuous operation ever since, even during WWII when the only way to get fuel was to fly patrols off the coast of New Jersey. Today it has 60 members and operates a 1999 Piper Archer III and a 1999 Cessna 172S.

The Lake Shelbyville Flying Club in Shelby, Illinois is brand new. In July at AirVenture the club was recognized as the 200th new flying club formed as part of AOPA’s You Can Fly Flying Club Initiative. In their first year of operation, they have faced some challenges and have come through stronger than they could have expected.

The two clubs may have been formed 90 years apart, but there are some similarities that have helped both clubs succeed. Providing aircraft at reasonable rates is one key component, while having a good relationship with the airport is another.

“One of the reasons that we’ve been so successful is we have a great relationship with our airport management and the airfield community,” Slim said.

The club has been based at Reading Regional Airport (RDG) since 1965 and it makes a point to give back to the community by participating in events held at the field. During the annual WWII Weekend, a major airshow each June, as well as at other events like car shows and fly-ins during the year, the club sells water and helps park GA aircraft. 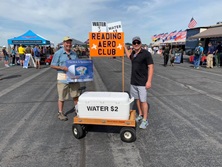 For the club’s 90th Anniversary, they partnered with the airport to host an Aviation Career Fair, which featured presentations about various aspects of the aviation industry such as jobs as dispatchers, controllers, mechanics, and pilots.  Steve Bateman, Director of the Flying Clubs Initiative, attended and presented “You Can Be a Pilot”, a loud and visually fun program designed to stir the blood of future aviators.

Community service is part of the club’s culture and one of the reasons the club has endured. Many members participate in public benefit flying like Angel Flight East, the Veterans Airlift Command, or animal rescue flights.

Each December, the local EAA chapter hosts “Christmas in the Air,” a Young Eagles rally with games and activities in Santa’s workshop for younger children while pilots, including from the Reading Aero Club, fly children ages 8 to 17. Santa and Mrs. Claus usually fly in for the event as well.

Participating in public benefit flying and events like Christmas in the Air or the WWII Weekend helps attract new members because of the outreach, but more importantly it keeps people involved in the club. “I think that is the key. It is easy to go out and fly and enjoy the benefits of being in a club,” Slim said. “But to enjoy the club as a group, I think all of these events help bind us together.”

Participating in these events not only helps forge strong ties with the airport management and broader community, but it also allows club members opportunities for service. The club has a requirement that members volunteer 12 hours a year, or they are charged $10 an hour for the balance of the time. So, if someone doesn’t volunteer at all during the year, they would be charged $120 in February, when most members fly less and therefore have smaller bills for flight time.

About 75 percent of the club members participate and Slim said having the financial aspect to the service hours helps encourage people to come out. In fact, many members contribute more than the required 12 hours. 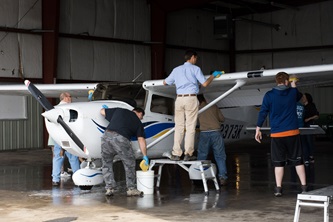 “Members are really interested in meeting their service hours,” he said. “They call me and say, ‘Hey I want to do something for the club, where do I sign up for my service hours?’” Any service to the club can count, such as plane washes, mowing the grass, cleaning the hangars and airplanes, volunteering during airport events, or serving in club positions.

Among the club positions that contribute more than their share of service time are the members on the financial team, which consists of the Treasurer and a few other members.

“Our financial team and all the work that they do is key to the club,” Slim said. Because of their efforts in recent years, the club’s capital improvement account has $360,000 in it. That’s a far cry from when the account dipped to less than $5,000 in the early 2000s.

At the time, the club bought a fourth plane and was planning to sell one of the other three planes, but then no one wanted to. So, the club used capital improvement fund to cover maintenance on the four aircraft to the point that the account was almost empty. 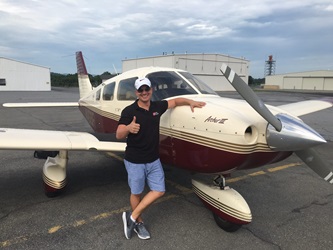 Since that time, the club has sold two airplanes and restored the capital improvement account to a level that they are considering purchasing a third plane. They would also like to find a large hangar or build one that could house all of the club aircraft and clubhouse rather than having the planes in T-hangars and the clubhouse in a separate building.

The club is in this position because of “a very active, very dedicated, very talented financial management team,” Slim said. The group analyzes aircraft costs and income, identifies trends, and use the information to determine the proper rates. Their work has put the club on a solid financial footing, while maintaining the ability to offer well-appointed aircraft at reasonable rates.

That culture of service, along with reasonable rates and a strong financial underpinning has kept the Reading Aero Club successful for 90 years.

Like the Reading Aero Club, Lake Shelbyville Flying Club has a strong relationship with the airport. “It helps when you’re on good terms with your airport manager,” Club President Tim Bowyer said. In fact, the club “was more or less his idea.”

Shelby County Airport (2H0) Manager Scott Jefson was interested in having a flying club at the airport but didn’t have the time to form one himself. Tim was looking to get back into flying after being out of the cockpit for nearly 25 years. A business associate who is also a pilot suggested he talk to Scott, who put Tim in touch with Paul Canaday. Paul volunteers a lot at the airport and, like Tim, was recently retired and looking to fly more.

“It just came about because a couple, three of us thought we needed to fly, but none of us could afford to spend $100,000 on an airplane and a hangar, and maintain it, and do it all by ourselves,” Tim said. “We set up a meeting to see if anyone was interested. At the next meeting we elected officers and away we went.” 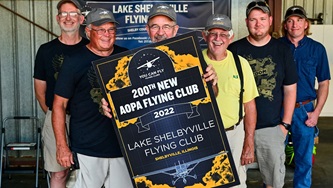 As the club was getting organized, they reached out to other clubs for information and to get copies of their bylaws. They also utilized AOPA’s Flying Club Resources, as well as information from EAA. “There’s a lot of help out there between those two organizations,” Tim said. “We used AOPA as the base as we were trying to write the bylaws.”

The club got a lot of good information, suggestions, and ideas from what other clubs had done, especially local clubs. “Don’t be afraid to plagiarize from other folks and make it your own and make it work,” Tim said.

Once the club got organized, it found an aircraft to lease—an old straight-tail Cessna 172 with a glass panel in it. “It was really a pretty airplane. It was kind of a sleeper when you walked up and climbed in the cockpit,” Tim said. “It had 2020 avionics in a 1956 airplane.” 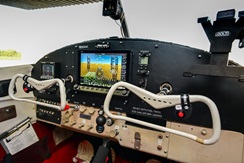 Everything was going great—but then the club hit some turbulence. Unfortunately, the aircraft owner’s situation changed and after a few months he terminated the lease.

That’s a difficult situation for a newly formed club to be in. However, one of the club members owns a Cessna 150 and had already started talking about leasing it to the club. An agreement was reached, and the club was up and running again in a short time.

They also found another airplane that came into the maintenance shop on the field for an annual and the owner was looking to sell. So, seven of the nine club members formed an LLC and are negotiating to purchase the aircraft. The members discussed becoming an equity club, but decided against it because of the added costs that everyone would have to put in. 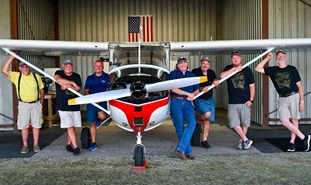 The club has considered raising its buy-in from $500 to $750 or $1,000 if they’re able to maintain two aircraft. Like Reading, providing aircraft at affordable rates is important. The club charges $50 an hour, dry for the C-150 and if they add the Cessna Cardinal, the hourly rate is likely to be $60 an hour, dry. Dues are $185 a month and $100 of that can be used for flight time. The club thought members would be more apt to fly and stay proficient if the flight time was part of the dues.

Lake Shelbyville has learned a lot in its first year. One of the lessons is to reach out to other clubs for guidance in developing club bylaws and operating procedures. Whether the club has been in existence for 90 years, like the Reading Aero Club, or even just a few years, they can be a valuable resource.

“Once we found out there were other clubs out there that had been successful, we’d call them up and say we’re thinking about starting a flying club and they just opened up,” Tim said. “They’re ready to help. They really, really are.”

Another lesson is to try to maintain as much control of the airplane as you can and to write an aircraft lease that clearly defines roles and provides the club an opportunity to be a part of the decision-making process.

You can’t foresee everything that’s going to happen, so stay flexible and go with the flow. Tim suggests that clubs don’t tie themselves down too tightly with rules and regulations and to leave a little room for interpretation (by the Board of Directors) to deal with whatever situations come up.

“We’ve had a stumble or two and we’ve come through,” Tim said. “We’ve still got some money in the bank, and I think we’re stronger for it. I think we’ll end up being a better club.”