Club Spotlight: The Benefits of Volunteering—Wings Over Waxhaw Offers Incentives for Lending a Hand

The heart of any flying club are the people. As volunteer organizations, a club’s success is dependent on the dedication and engagement of its members. The Pareto Principle says 80 percent of the work is done by 20 percent of the people.

So how does a volunteer organization like a flying club expand the number of members who contribute to club duties, responsibilities, and activities? Wings Over Waxhaw Flying Club in North Carolina has a novel idea—members who volunteer a set number of hours in a quarter are eligible for a discounted hourly rate in the following three months.

The club is based about 23 nautical miles south-southeast of Charlotte International Airport (CLT) at JAARS-Townsend Airport (N52). The airport is a privately-owned, public-use airport. It is owned and operated by JAARS - Jungle Aviation and Radio Service, a mission aviation organization that supports bible translation efforts around the world. The organization has two Cessna 206s, two Helio Couriers, a Pilatus PC-6, a Robinson R-66 and a 172 that are based at the JAARS Center at N52.

“We’re an organization that has a huge aviation focus and the aero club has served as an outlet to keep aviation fun for those guys who are here in the interim,” Wings Over Waxhaw President Rachael Stoner said. “The club has been for JAARS an opportunity for these guys to kick back, relax and remember their fun, aviation roots. That’s been the purpose of the flying club at JAARS over many, many years.”

Wings Over Waxhaw and JAARS are separate organizations, but they do have a close relationship. The current club was founded 2015 when a man named Robert Atten wanted to donate a 172. JAARS doesn’t fly 172s so they decided to see if there was interest in restarting a flying club.

Robert Vinroot and Scott Musselman, who was a pilot with JAARS at the time, took on the process of founding the flying club. Although JAARS and Wings Over Waxhaw are separate entities, they do have a Memorandum of Understand between the organizations the provides a mutually beneficial arrangement to keep costs down for the club and members. For example, JAARS has a private fuel farm for their aircraft that is not available for sale to the public. However, they allow the club to purchase fuel at cost, which is below market prices. 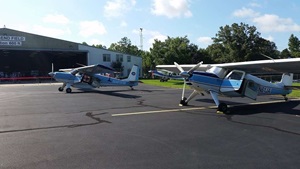 Another way the club keeps costs low is to do a lot of work on the aircraft themselves. The club had put a new engine on the plane and wanted to repaint it. That’s how the idea for the Volunteer Discount program came about.

“We asked members if they could spend a couple of hours on a couple nights a week to work on stripping the airplane,” Club Treasurer Joe Shrewsbury said. “We had a number of people that were interested in coming down and helping. They were curious about what’s involved in maintaining an airplane. Then we thought, how do we incentivize people to come out and work? So that’s how it started.”

The program allows any member who volunteers six hours to the club to receive a $10 discount on the hourly rate. Instead of paying $100 an hour, the member would pay $90 an hour for the remainder of the month when they reached the six-hour threshold and the following three months.

The club’s A&P came up with a list of things members could help with under supervision. Joe noted that some people would help out even if there was no incentive, but “once we started the discount, we did have additional people.”

After creating the list of maintenance items that members could do to earn volunteer hours, they realized not everyone wants to do mechanical work. That’s when they realized there are plenty of things members can do that benefit the club. 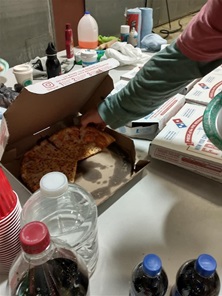 “Everyone started getting creative,” Joe said. People asked if they could get volunteer hours for bringing food to the club meetings or washing the airplane.

The board said yes to just about anything that would benefit the club.

“That increased engagement,” Joe said. “People felt like they had invested in the airplane, and they wanted to take care of it and wanted to be a part of it.”

Some of the other things people do to earn their time include maintaining the website, maintaining the GPS database, and inspecting the fire extinguisher. “Activities can include anything that needs to be done that keeps the board members from doing board work and the mechanics doing mechanical work,” Joe said. “If it can be done by anyone and it has to be done, we ask people to come and help.” 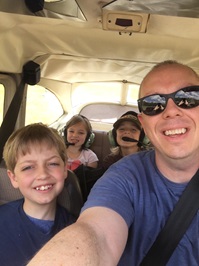 One of the more interesting ideas that the Board had was to offer credit to any member who attends a WINGS Seminar, either virtually or in person, and then give a short presentation to the club at a monthly meeting.

“The goal is for them to go and learn something and then share it with the others. If they go take a WINGS Course, that’s great for them but that doesn’t benefit the club directly,” Rachael said. “Indirectly it does for sure, but we have them come and present 10 or 15 minutes of what they’ve learned, at a club meeting.”

Board Members get the discount for their service to the club. 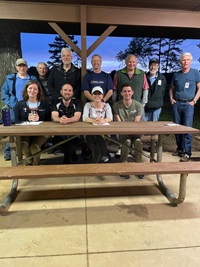 About a third of the members have taken advantage of the discount program. The club has a page on its website where members can submit their hours. It goes into a form that one of the Board Members checks. As soon as a member hits six hours, they get the discount right away. Members can maintain their discount if they maintain their volunteer hours.

“Our goal is for members in the club to be flying the airplane. The more we fly, the more proficient we are, the safer we are,” Rachael said. “The more we’re excited about it, the more we want to share it with others and share it with the community. It’s really a program to encourage people to fly and an incentive to volunteer.”

For more ideas on how flying clubs can strive for more engagement and participation from members, see this month’s Question of the Month:  How Can We Get Members More Engaged in Our Flying Club?