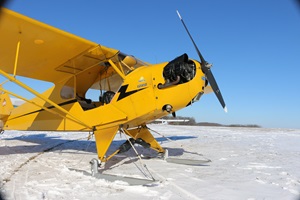 While the weather outside might seem frightful, for some pilots it’s absolutely delightful. There is a cliché in flying that once you earn your private pilot certificate you have a license to learn. Every flight offers the chance to experience something new or practice techniques to improve your proficiency. Winter weather can provide some wonderful and unique flying opportunities to do both at the same time while expanding your aviation experience.

One way to do that is flying on skis. If your club has a taildragger and you live in a snowy part of the country, you might consider swapping those tires for skis. If that’s not in the cards but you live in the Northeast, consider flying into the only FAA-certified ice runway in the lower 48 states – Alton Bay, New Hampshire (B18).

Having a Ball in the Snow

Flying on skis is a great way to expand your flying experience and hone your stick in rudder skills. Most planes on skis have conventional gear, so it helps to have a tailwheel endorsement. But even if you don’t, you can still learn those techniques on skis. In fact, I have a friend who did all of his initial flight training in a Cub on skis. 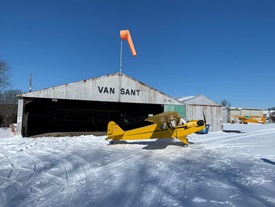 Nosewheel aircraft like Cessnas and Cherokees have engineered a lot of the instability out of the airplanes, Michael McIntyre said. He is a skiplane instructor at Van Sant Airport (9N1), a grass strip along the Delaware River halfway between of Allenton, PA and Trenton, NJ. “Taking a tailwheel onto snow and skis takes a little more finesse.”

You don’t need an endorsement or a special rating to fly on skis, but you should fly with a qualified instructor to learn what to watch for and the techniques that need to be used. Michael recommends his students start by reading FAA Handbook 8083-23, Chapter 7 - Skiplane Operations.

For instance, flat lighting occurs on an overcast day with intermittent sunlight. Terrain may have varying shades of white and may appear taller or wider than they actually are. This type of lighting can alter depth perception. Another condition is whiteout, which can occur while flying in a valley with both sides obscured by snow or fog. It may be a clear day, but visual references may be difficult, so relying on instruments until you can climb out of the valley may be helpful.

The handbook also goes through the differences in preflight, taxiing, takeoff, landing, and parking. The hardest thing people struggle with on skis is handling the plane on the ground. What comes to mind first is that you don’t have any brakes, so managing your power and speed are important. But not being able to stop isn’t the biggest concern. In snow, especially if it’s deep, you need to make sure you don’t get stuck.

Bar Eisenhauer, who operates at Van Sant, stressed three major points about skiplane flying. “The things you have to be aware of are making wide turns and slow turns,” he said. “But along with that, keep moving. Don’t stop.”

If you do stop, skis can freeze to the snow. If that happens, don’t lift the tail with the throttle and bang it on the ground. All that does is beat up the tailwheel, Bar said. Instead, he recommends trying to wiggle the skis out using the rudder.

“If that doesn’t work, go for stirring the soup,” Bar said. “Take the stick without raising the tail too much, it’s ok if you get it an inch or two off the ground, stir the pot and wiggle your rudders. Do a dance with your feet and stir the pot (move the stick in a circle). Your wings are going to rock, your tail’s going to wiggle a little bit, and you’re releasing a little bit of pressure. That should break you loose.”

Once you’ve broken free, you need to be mindful of the wind. Taildraggers, with the center of gravity behind the main gear, are more challenging in a crosswind as the wind pushes on the tail and wants to swing the plane around like a weathervane. On skis, drifting sideways is common, so it’s important to know where the wind is coming from and plan ahead. Know where there are snow drifts or other hazards so you can make sure you are keeping a safe distance.

Another difference between skis and wheels is keeping the stick neutral or a bit forward to unload the tail when you taxi so it is lighter in the snow. On a hard surface, full aft stick is generally applied for taxiing. Takeoff and landing on skis requires proficiency using soft field takeoff and landing techniques, which take on a different feel in the snow. The skis should glide smoothly on the snow and once you’re in the air, the plan flies normally.

When asked what’s the most fun about flying on skis, Michael said, “Just the uniqueness of it. You felt that landing and how gentle it was. It’s almost like coming down on a feather pillow. That’s awesome!” 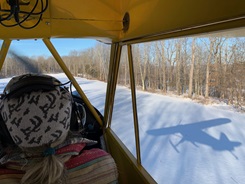 Taking it to the Ice

Over the past decade or so, making a pilgrimage to the ice runway at Alton Bay, New Hampshire (B18) has become a rite of passage for some pilots in the northeast. Most years the runway opens sometime in January and closes in late February or early March, but it varies. Some years, conditions don’t allow the runway to open at all. The ice at the southern end of Lake Winnipesaukee needs to be at least 12-inches thick to open the runway.

Once it does open, the status can change day to day or even hour to hour. If you do plan to fly there, checking NOTAMs is a must before you leave, and if you can get PIREPs en-route, it is highly recommended.

Pilots first began landing on the lake around 1940 when the now defunct Alton Bay Flying Club decided to have a fly-in on the ice. “The town of Alton does a Winter Carnival,” New Hampshire Aeronautics UAS Planner Jason Leavitt said. “I think they tied the two together and had the fly in during Winter Carnival and it just became an annual event.”

Over the past 12 years, Paul LaRochelle has been the volunteer runway manager. This year he is passing the baton to Jason. Once the ice is thick enough, Paul plows the runway, which varies in length due to conditions. It can be anywhere from 2,300 to 2,900 feet long. It is 100-feet wide and there is a 50-foot wide parallel taxiway. South of the runway is a parking ramp that can accommodate about 30 planes parked with high wings overlapping low wings.

Some of the techniques necessary for skiplane flying are also the same on ice. For instance, in both cases you don’t have the ability to brake. It’s important to stay ahead of the aircraft, managing power settings to keep moving and to anticipate movements ahead of time. In both cases, it’s best to go slow and leave plenty of space for wide turns.

Without the ability to brake, runups have to be done while taxiing. “You’ve got to get yourself lined up with the runway and do your run up while rolling,” Jason said. “You can’t stop and hold yourself still.” The same is true on skis.

Jason recommends practicing short field takeoffs and landings. It’s important to fly a precision approach with the proper glide slope and speeds. “You want to come in at the appropriate speed and land where you want to land. You don't want to float too long or get too far down the runway,” Jason said. “You can't just apply brakes to stop yourself. You have to roll to a stop.”

Taking off requires easing the power in slowly to allow the airspeed to build. This will provide rudder authority to counter the P-factor. On ice, nose wheel steering is less effective and there is little to no braking ability. If you advance the throttle too quickly, the plane could veer to the left on the slippery surface with little control to stop it.

Prior to coming in, the best thing to do is watch the FAA WINGS Seminar to familiarize yourself with the layout, procedures, and alternate airports in the vicinity in case you aren’t able to land. Alton Bay has no facilities or fuel, although Jason said there is a table where they have hot chocolate and coffee, and you can get a certificate to record your achievement.

A few other tips.  Consider the possibility that you might get stuck there. If conditions deteriorate after you land, be prepared to stay overnight. For instance, if the sun starts melting snow or ice, or the winds shift to favor Runway 19. 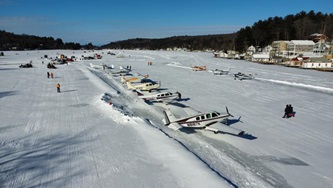 Only Runway 1 is operational because of the potential hazard of aircraft landing long on Runway 19 or not being able to stop before the parking area. “If the wind were to favor Runway 19, the runway actually would shut down. Landing when you don't have any brakes with a tailwind is not a good thing,” Jason said. “There are a lot of situations that could shut that runway down that wouldn't shut down a normal runway.”

Bring tie down stakes – either the corkscrew type or something like the Claw. Don’t forget chocks, an engine cover/blanket, and any tools that you think you may need. It’s also recommended you get cleats or clip-ons for your boots to give you better traction, and of course wear warm clothes and shoes in case you’re on the ice longer than expected.

Before flying in, check NOTAMS. There is a phone number (603-271-7398) that gets updated with current conditions, and Jason or Paul post on the Alton Bay Seaplane Base and Ice Runway Facebook Page frequently to provide condition reports. 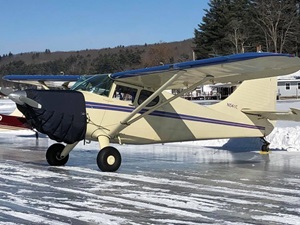 “You really have to be pretty proficient in your flying abilities – both landing and taking off,” Jason said. “It's certainly not something that a lot of pilots do, so it's good bragging rights and it’s definitely a good proficiency test.”

This winter take a look at how your club members can go beyond hangar flying and expand their aviation experiences—whether it’s flying to Alton Bay’s ice runway or taking to the skies on skis.