Most people try to avoid getting upset. Generally, that’s a good idea. But when it comes to flying, a little upset or unusual attitude training can be helpful, and fun.

A long time ago, at a flight school not that far away…student pilots were taught spin recovery and were required to demonstrate the skill on their private pilot check ride. The CAA, the predecessor to the FAA, did away with that requirement in 1949.

While it might not be required, being comfortable with spins and knowing how to recover from unusual attitudes increases a pilot’s aeronautical knowledge and abilities, while building confidence.

Many clubs operate aircraft that are capable of aerobatics, such as a Cessna 152 Aerobat or a Bellanca Citabria.  Having such an aircraft provides members the opportunity to go beyond their comfort zone and get training in spins, aerobatics, and unusual attitudes.

One such club is the Wild River Flying Club based at L.O. Simenstad Municipal Airport (OEO) in Osceola, Wisconsin. The club has a diverse fleet of four aircraft that provide its 32 members the ability to choose the right plane for the mission they are flying.

The Cessna 172 is used for local flying and training, the 182 is good for cross country flights or IFR training, and the Cherokee Six 300 is available for members looking to carry more passengers or a heavier load. The fourth plane in the fleet is a Bellanca Citabria 7GCAA. Members fly it for fun and to enhance their skills—whether it’s getting a tailwheel endorsement or doing spin training and aerobatics.

There are 15 members checked out in the Citabria, and 11 of them were actively flying the plane over the past year. Having a tailwheel aircraft gives Wild River an advantage over other clubs in the area because it offers members the opportunity for something different. Some members have joined the club just because of the Citabria, Club Vice President and Citabria Aircraft Captain Lars LaVine said.

Having a taildragger that can do aerobatics offers members an aircraft that they can have a lot of fun in, but it also provides a platform for members to improve their flying skills and become more proficient pilots.

It goes without saying that adding a tailwheel endorsement helps members gain stick and rudder skills, but the club encourages pilots to go beyond that to use the Citabria for spin (recovery) training.

When Lars joined the club, he had about 100 hours total time.  To check out in the 182, he needed 10 hours of instruction, which he did with club approved instructor, Woody Minar.  Woody was a strong advocate for advanced training in the Citabria, and Lars was planning on flying with him to get his tailwheel endorsement.  Sadly, Woody passed away from cancer a few months after Lars joined the club.

Lars turned to a club approved instructor named Dick Johnson, who owns the FBO and flight school on the field. He also was the chief test pilot for Bellanca years ago. On his first or second lesson with Dick, Lars told him, “I’ve never experienced a spin. I don’t know what that looks like. I’ve been through all my training, but we didn’t do that in the 150s, 152s, or 172s that I’ve flown.”

So, they did it.  Like most pilots doing spins for the first time, Lars was a little nervous. “I built myself up thinking this was going to be bigger and scarier than it was,” he said.

Dick demonstrated putting the aircraft into a spin and the recovery—power idle, ailerons neutral, add opposite rudder and then ease the nose up. Then Lars did it himself.

“It definitely made me realize it’s not this big bogeyman,” he said. “It was definitely worthwhile.” 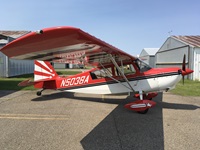 Doing the spin training has increased his confidence and skills and could do the same thing for your members. In fact, Lars is planning on going beyond what he has already learned to do some light aerobatics and upset recovery.

His big takeaway was if he was in some other airplane, like a 172, and had that happen in the pattern or at pattern altitude, “you’ve got to react quickly but …don’t over dramatize it,” Lars said. “Just take the appropriate action and unless you’re really low, you’ll be alright.”

Loss of control is one of the leading causes of General Aviation accidents and learning how to recognize and recover from these situations makes pilots safer and helps build the safety culture within the club.

There are plenty of resources to learn about unusual attitude training in addition to getting flight training. Many of them can be found in the FAASTeam Stall, Spin and Upset Recovery Training Fact Sheet.

More information and some milder exercise that will expand your comfort zone can be found in this editions Question of the Month.