The Capital Area Light Flyers (CALF) is an Ultralight/Light Sport Club in northern Maryland that encourages its members to fly together by hosting fly-ins throughout the summer at various grass strips in the region.

“Our focus is flying, fun, friendship, and food,” Past CALF President Michael Bishton said. “That’s what we do. We have about six fly-ins a year and some fly outs.” 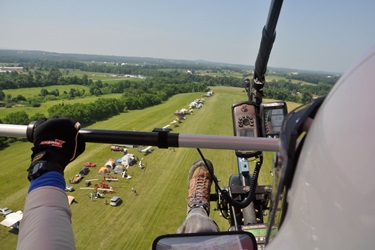 The club’s 65 members embody the idea that most activities are more fun when they are shared with others. Flying is no different—especially when there is food.

These clubs differ from a typical general aviation club in that they don’t own any aircraft. “We are a non-ownership club, which is the same as CALF,” Flying Club 1 President Steve Beste said. “The club has no assets except a BBQ grill.”

Both clubs are made up of members who own and fly a variety of light aircraft, stuff that flies low and slow, Steve said. Among the 55 Flying Club 1 members there are “a couple of Aeronca Champs, we’ve got a Tecnam LSA, a couple of two-seat Quicksilvers, a couple of two-seat trikes, an experimental trike, which is not an ultralight,” Steve said. “We do have some actual ultralights, but it would be wrong to say we are mainly an ultralight club. We are light flyers. We also have a handful of PPG guys, powered paragliders.”

Although these light flyers are somewhat different than the flying clubs we usually feature, the community spirit and camaraderie built through shared activities like fly-ins and fly outs can serve as a model for any type of club. 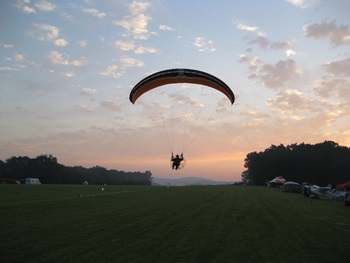 Flying Club 1 was the first club chartered by the United States Ultralight Association (USUA) in 1983, although the club has not been affiliated with the USUA for many years. CALF is even older. It was formed in 1974 by a few Ultralight pilots at time when these aircraft were just being developed.  Today the club is associated with EAA.

What defines these clubs is simple, grassroots flying—which these clubs take literally. Most of the fields they fly to are just that—small private grass strips.

CALF sponsors six fly-ins a year from May through October.  They are held at different people’s fields who are members.  Those members take turns hosting the fly-in, doing the cooking and clean up.  Current CALF President Ted Forman has a trailer with tables and chairs and all the utensils, which they drive from fly-in to fly-in. 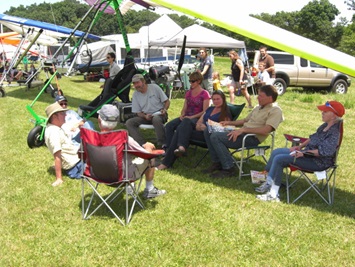 One advantage of flying light, slow aircraft is the destinations are generally fairly close together which allows members to either fly-in or drive in.  Michael said the largest fly-in they have hosted had 25 aircraft, and even on a mediocre day they’ll attract four or five aircraft. They post the fly-in dates and locations on Facebook and sometimes have people show up who are not members.

“We’ll easily have 60 people who fly in and drive in,” he said. “We set up tables, have fun, give rides and visit with each other.” Michael noted the events are a great way to keep members who are no longer flying engaged because they want to stay connected.

Another event that CALF members have participated in as a group activity is the Maryland by Airpassport program sponsored by the Maryland Airport Managers Association.  Participants can earn a leather jacket by visiting all of the state’s airports and a few aviation museums, as well as attending safety seminars (see April 2021 Club Connector). It’s something Michael wants to do more of in the future.

“I’m hoping to lead fly-outs to get people to fly in groups for the leather jacket,” Michael said. “It’s pretty countryside. There are a bunch of airports on the Eastern Shore, and I can see doing a circuit of those airports over a weekend and then flying another weekend out to western Maryland and picking up those airports.”

Another activity clubs can do is host a Poker Run. Flying Club 1 has been doing an annual Poker Run for years.

“The Poker Runs are one occasion to put a marker in the ground that we are a flying club and have the social experience of flying together,” Steve said. “We’re a flying club for God’s sake. We’re always at the edge of decaying into a mere social club. It’s important to have events where we go flying together as opposed to individual flying, which happens all the time.”

They used to have someone fly the course and leave the cards in advance, and pilots would come and go their own schedule. A few years back they decided to change it and have everyone fly together because it helps build bonds between the pilots and the airport owners.

“We all fly as a bunch. We gather at the starting airport and fly off to the next one. The fastest takes off first, the slowest last. We meet at the airport and cards are in a purple velvet bag,” Steve said. “Logistically it’s a lot easier, and we often get the airport owners coming out to chat and schmooze. They love that and its more fun as a group.”

And that’s a big part of what flying clubs are all about—the community and camaraderie. Whether your club organizes a fly-in or Poker Run, or even if a few club members take the club plane to fly out to breakfast together, there are lots of opportunities to create group outings.

Flying clubs of any size and any type are places “where you get together and do stuff. That’s the goal,” Michael said. “It’s about building a community of flying fun.”