The Free State Flying Club is in the midst of an expansion, nearly doubling in the past 18 months. To meet the growing membership, the club wanted a second plane to go with their Cessna 172, which they’ve had for 30 years and really like. The goal was to get something similar but that would fit the club mission of cross country flying at an affordable price. The result was adding a Cessna 177 Cardinal. 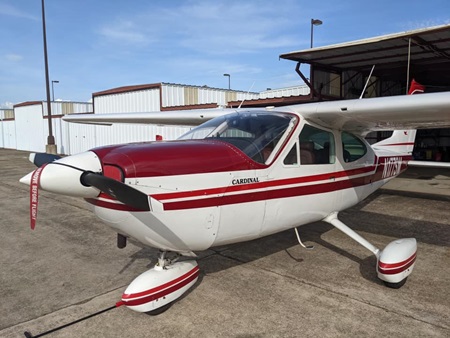 You might say the Cessna 177 Cardinal is the Goldilocks of the Cessna family. It’s bigger, faster and more complex than the 172, but not quite as big or fast as the 182. Originally designed as a replacement to the 172, the Cardinal ended up becoming an option that falls squarely between Cessna’s two most popular single-engine aircraft.

“The advantage of the Cardinal is that it's a totally different bird [than the 172],” Club Vice President Ross Nizlek said. “It has different advantages and strengths and gives you a little variety, while still being relatively similar.”

Ross and Club Safety Officer Drew Myers, who also is AOPA’s Flying Clubs Manager, tell us about their experiences operating the Cessna that often gets overlooked.

The Cessna Cardinal debuted in 1968 and was produced for 10 years. Designed as a replacement for the 172, it originally featured a 150-hp Lycoming O-320 engine and a fixed-pitch prop. In 1969, the engine was upgraded to a 180-hp Lycoming O-360, and in 1970 minor improvements included a constant-speed propeller and a new airfoil. A retractable gear version debuted in 1971.

Maintenance (4 out of 5)
A Cardinal can be a little more expensive than a 172 to maintain, but not quite as much as a 182. Having a constant speed prop makes the annual more expensive than the 172, but the advantage over a 182 is that it has a smaller engine with a longer TBO. The systems are similar to the 172 even though the airplane is a little different.

Because it was shorter lived model with a lower production run than other Cessna singles, some parts can be somewhat scarce. It has some unique maintenance needs, but isn't so foreign that most shops won't be able to work on it Keep in mind, if your club chooses to operate a Cardinal RG, the annual will be more expensive because of the required gear swing.

One thing potential Cardinal owners should be aware of is a potential AD requiring inspection of the carry-through spars. The FAA received comments this summer on a notice or proposed rule-making that would add the Cardinal to an AD for Cessna 210s that took effect last year. 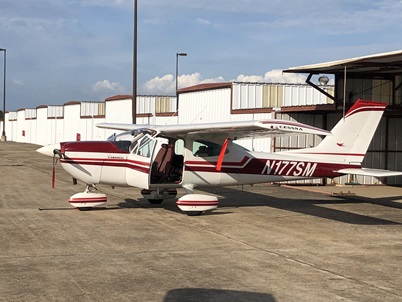 One big advantage is that the Cardinal has the widest cabin of any of the smaller single-engine Cessnas. It also has big, wide doors and sits lower than either the 172 or 182, making it more accessible, particular for people with mobility issues.

You need to be careful, though, with the large doors. They are completely different than any other Cessna doors and can potentially create a maintenance issue. “If you're not careful, and you open the door with a strong tailwind or a gusty tailwind, you can seriously damage the side of the fuselage if a wind catches it,” Drew said. “You never want to leave it unattended with the doors open”

Getting insurance shouldn’t be a problem—it’s a Cessna and insurance companies are familiar with the type. “We didn't have an issue getting insurance,” Ross said. “We went through our existing carrier and it didn't significantly alter our rates.” Free State uses Avemco and adding the Cardinal added about $700 a year to the club’s rates.

Free State plans to upgrade the avionics to have a good, capable IFR suite and add an autopilot in the future. When they do, the expectation is to use the Cardinal for pilots working on their instrument rating. They also expect the Cardinal to be used for long cross-country flights, so availability may be better in the 172 for training, and the 172 is a little cheaper. The main difference between the 172 and the Cardinal is the constant speed prop and the stabilator. 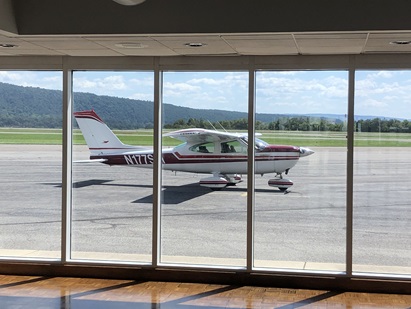 “Our mission has always been cross-country travel,” Drew said. “This airplane has extended range fuel tanks and can carry 61 gallons of gas.” The standard tanks carry 50 gallons, so it’s nice having enough fuel to fly another hour. The Cardinal cruises at about 120 to 125 knots.

There is a drawback to the huge wing tanks and that is “when it's full of gas, it's basically a two-passenger airplane,” Drew said. The specs list the maximum useful load between 857 lbs. to 1,040 lbs., but with full fuel that drops to 527 lbs. to 700 lbs.

“We definitely have to change our fueling procedures,” Drew said, speaking as the club safety officer. “We don't refill the airplane when we bring it back after flying because we want the next pilot to make the weight and balance decisions for what works for them”

The plane has a tendency to be very forward CG, which is common for Cardinals, Drew said. “When we looked at it, we don't think it's possible to load the airplane aft CG without going over gross weight. So, it's kind of unique in that sense.”

The club got some ballast for the baggage compartment. “If you are just doing a local flight with two people in the front, you definitely need some ballast in the backseat or in the baggage area to balance it out so you have the CG within limits,” Drew said.

The Cardinal looks fast on the ground. With a swept back look and no struts, the sleek appearance makes it look like it’s flying before it’s flying. Some Cardinal owners have compared the feel of the plane to more of a sports car than the 172 or 182. One reason is the seats have a more reclined style. 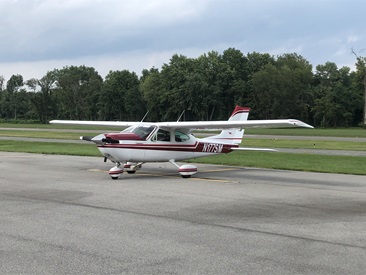 Without a wing strut, and with the front seats positioned ahead of the leading edge of the wing, visibility in a Cardinal is better than the 172 and 182. The glare shield also is lower than in a 182 so you’re not staring at a wall of instruments.

Ross states that its cross-country capabilities makes it more fun. “It's a better cross-country machine. I think there is some fun in that,” he said. “It’s got longer legs and is a little faster, so that opens up some additional possibilities for cross-country planning. In that regard, I think it's got a little fun factor.”