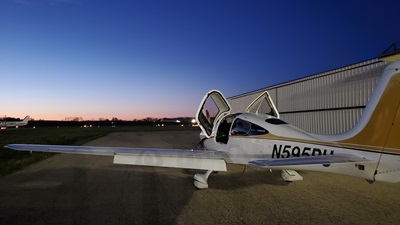 When the Mohawk Flying Club based at Gerald R. Ford International Airport (GRR) in Grand Rapids Michigan decided adding a third airplane made sense, their extensive process to determine the right aircraft led them to the Cirrus SR20. They were looking for something less than 20 years old, that had composite construction, and had plenty of curb appeal. The SR20 delivers all that in a package with advanced avionics and safety features.  Club Vice President Randy McClary and Member Lewis Butler share why they’re giddy about the club’s newest addition.

The Cirrus SR20 debuted in 1999 and transformed the general aviation industry, offering a fast aircraft made with composite material, featuring a glass panel and an aircraft parachute system. It is not the aircraft for a club whose mission is to only offer affordable aircraft. It’s attractive to clubs interested in high-end aircraft that are modern, comfortable, fast, and offer the latest safety features. The purchase price on a SR20 ranges from about $200,000 for an early model to more than $500,000 for one just a few years old.

Maintenance (2 out of 5)
Maintenance is more expensive on a Cirrus because of its many safety features. The biggest cost is repacking the parachute every 10 years, which runs about $15,000 to $18,000 depending on which generation aircraft you have. The G1s and early G2s are more expensive because you have to redo some composite work to reseal the fiberglass and repaint. Later generations have an access panel. All the older planes before the G5 were a cable system. Now it’s an electrical system, so they have to replace the mechanical system with an electrical system.

Randy also noted there are costs for replacing the line cutters, which is going to be up to $6,000. And the airbags in the front seatbelts have to be replaced after six years, which is another $4,000 to $6,000. These added safety features require the club to have reserve accounts that are roughly three times larger than they would be for a 182 or similar airplanes.

Some other unique design features that pilots need to be aware of include the honeycomb seats designed to crush to absorb the impact if the chute is deployed. When you get in and out of a Cirrus you don’t want to stand or kneel on the seats because that could damage the honeycombs.

Lastly, “you have to have Cirrus involved with every repair,” Randy said. “There are Cirrus centers all over the country, but you don’t need to go there. It just needs to be done under the purview of Cirrus.”

Mohawk’s plane had some hangar rash where an aircraft was backed into it and a winglet hit part of the main root on the copilot’s side of the plane. “It was repaired under Cirrus, but it also required repositioning the stall strip. There is a little strip that had to be reinstalled and all that had to be done under very specific instructions from Cirrus,” Randy said. 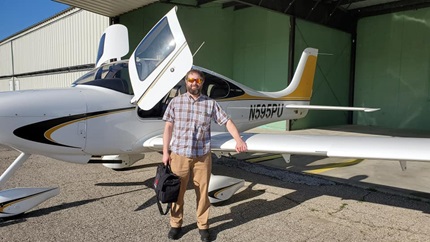 When Mohawk was looking to add the Cirrus, their insurance company required pilots to have a minimum of 300 hours. That didn’t work for the club because it would mean some low time pilots would need several years to build up the time to fly the aircraft.

“It’s not fair to the members who have pushed for this plane and have 150 hours and are going to have to fly for three more years to fly the Cirrus themselves,” Randy said. “We needed to look for another option and we did. We found the same insurance for the existing two aircraft, plus we got reasonable priced insurance on the SR20.”

The insurance costs for the SR20 are about $9,000 a year, which is what the club pays for the two Cessna’s combined. However, the hull value on a 10-year-old Cirrus is higher than the 40-year-old Cessnas. With the new policy pilots flying the Cirrus have to be named with their flight times listed.

To check out in the plane, the club requires members complete five hours of dual training in type and take CSIP training (Cirrus Standardized Instruction Program). One of the club’s CFIs got certified as a CSIP instructor so he can check out other members. CSIP training takes about 8 to 10 hours, depending on the pilot.

Mohawk purchased its SR20 from Purdue University where the aircraft was used for training. So it can be done. However, it’s a little more airplane than most students start out in and its high hourly costs make it a less attractive option. “An SR20 is a great trainer if you have eyes on an SR22 or a Vision Jet,” Randy said. “Then it makes a lot of sense to do your training in a couple hundred dollar SR20.”

With its higher speeds, things move a little faster in an SR20 than in other aircraft, so it’s important to stay ahead of the aircraft, which could be a challenge for a new student. It’s also less forgiving than a Cherokee or a 172. Another aspect is the learning curve to get comfortable with the advanced avionics – one the aircraft’s main selling points. It’s got everything, but you need to learn how to use it. The avionics does make the SR20 attractive for pilots looking to add an instrument training.

This is why you get a Cirrus. It’s fast, it’s roomy, and it’s got a glass panel with all the information you need at your fingertips.  With 56 gallons of usable fuel and a fuel burn listed at 12 gph, the SR20 has about a four-hour range. However, Randy said they typically see a fuel burn of about 8.5 gph at altitude, rich of peak, cruising at about 150 kts.

Mohawk did some modeling to compare flying their 182 and the SR20. “We looked at three different missions between a 182 and a Cirrus SR20,” Randy said.  “Let’s say you’re going to fly from Grand Rapids all the way to Martha’s Vineyard. What it came down to was a $4 difference in the total flight, but I save 45 to 50 minutes on each leg by taking the SR20.” 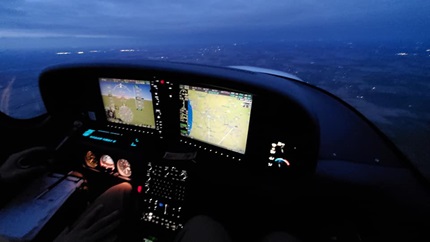 The avionics really make the Cirrus stand out. It has an all-glass panel and a wealth of information that Randy called “addictive.” The Garmin G-1000 display provides “good information that helps you make good, valuable decisions while you’re flying,” Randy added. “You have a good measurement of what your fuel burn is because you have a transducer doing that work for you. You get warnings on your screen, you get a bubble telling you what your range is so you know whether you’ll make your destination.”

The Garmin G1000 has synthetic vision and coupled with the autopilot, makes a solid IFR platform. “It has an FMS. It has two really good MFD/PFDs. You’ve got approach plates, it’s a great plane to fly.”

“You can’t overstate it – the curb appeal,” Lewis said. “For our club coming from the 172 and 182, the SR20 is just sexy compared to those planes.” He also said the aircraft “inspires a higher level of confidence,” which goes a long way with spouses and other passengers. Lewis likes the ergonomics of the aircraft as well as the sidestick and large screen glass panel. “It feels modern. It’s just a different type of thing for me and that’s part of what makes it fun.”

For Randy, what makes the plane fun is something more basic – “an armrest in the middle. I’m a big guy, having an arm rest in the middle is foreign territory.” On a more serious note, he enjoys how much the SR20 wants to fly fast. “For a 200-hp plane, boot-scooting it over 140, 150 knots is just amazing.” He also likes the visibility of flying a low-wing plane, particularly when banking and how you see a lot more.

The Cirrus SR20 is a fast, roomy, advanced aircraft that looks good with it’s curved smooth lines. It provides a great cross-country platform and puts passengers unaccustomed to flying at easy with the technology and the parachute—for a price. It’s a great plane to attract younger, more technologically attuned pilots, particularly if they plan to take vacations with their families. “It’s nice, it’s stable. Because it’s a little heavier, it rolls with the punches. It handles the wind turbulence a lot better than say a 172 does,” Randy said. “It’s a pilot’s plane. It’s really meant to use.”

Lewis added if you’re thinking about getting a Cirrus, “do it!”