Community is a big part of being a flying flub. Whether you are building camaraderie and friendship among club members or being an active and engaged member of the larger aviation community. One of the best ways you can build community, both internally and externally, is to participate in an airport open house or community day.

An airport open house provides a great opportunity for the club to gain recognition and awareness from pilots in the area, as well as to showcase your club to a broader, non-aviation audience. For people not familiar with aviation, a flying club may be a new concept to them—one that may be an avenue into aviation. An open house or community day is a great place to educate the general public about what a flying club is and help build goodwill about the benefits a local airport has for its community. 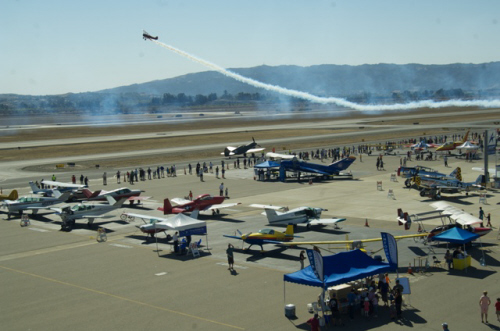 It’s hard to say when the country will return to normal activities and events, but as more and more people get vaccinated and states are lifting restrictions, there is a good chance larger public events will resume this year. As they do, it’s a perfect time for clubs to participate and let people know who you are and what you do. People are hungry for social interaction and activities outside of the house, something flying clubs have in spades.

One event that is scheduled for this fall is the annual Leesburg Aviation Education & Career Expo at the Leesburg Executive Airport (JYO) in Virginia. The purpose of the event is to introduce high school and college students to aviation career opportunities by providing information, resources, and networking opportunities. There are speakers, aircraft displays, vendors, and scholarships.

The Smokehouse Pilots Club plans to have a booth right near the entrance. Having a good location helps raise your visibility. If your club has an opportunity to pick a booth location, think about where there are likely to be high traffic areas so you maximize the number of people that will see you. 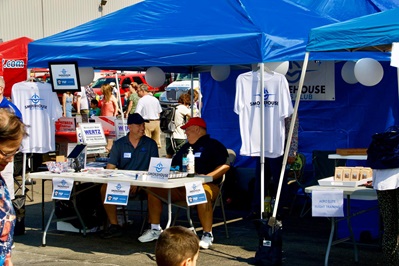 You’ll also want to make sure your booth stands out. That can be done a few ways. On the high end, Smokehouse plans to have a podcast area set up so they can interview students about their goals and dreams and what they hope to get out of the event. A more traditional route is giveaways, commonly known as “swag”.

Smokehouse plans to do that as well, as founder Gabe Muller is a big fan of swag. The club sells hats, polo shirts, water bottles and Yeti cups, which they’ll have at the booth. But they’ll also have lots of free stuff to give away. The club has branded stickers, koozies, patches, and “everybody loves a good pen in their flight bag,” Gabe said.

He preaches brand awareness to help instill pride in members and build camaraderie. “If your goal is to grow your club and expand your reach, brand awareness is everything,” Gabe said. “You want to have something you can be proud of and show you’re a part of something. Everyone wants community.” It could be as simple as your club logo on a hat or a shirt. “I suggest any club have something that you can show off to say, ‘hey we’re in this club,’” he said. 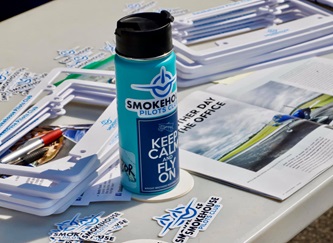 The Flying Particles Flying Club based at Livermore Municipal Airport (LVK) in Livermore, California has a booth at the airport’s annual open house each fall. The event is a little bit like a county fair – there are food trucks, local wineries offering tastings, there are aircraft on display, flight demonstrations, and plenty of booths for people to check out. It’s a one-day event that attracts about 10,000 to 12,000 people, club Vice President of Maintenance Elliott Hutton said.

The club typically has a pop-up tent or two with a table, club banner, and a couple of airplanes on display. Among the materials they’ll have to give out are a summary sheet of their rates and contact information. The club usually has 10 or 12 members to staff the booth, with club officers available to socialize with the people that are interested in learning more.

Besides engaging with the public, having a booth at an event is a good activity to have general members who aren’t in leadership positions contribute to the club. It’s also a way for club members to spend some time together, building camaraderie. 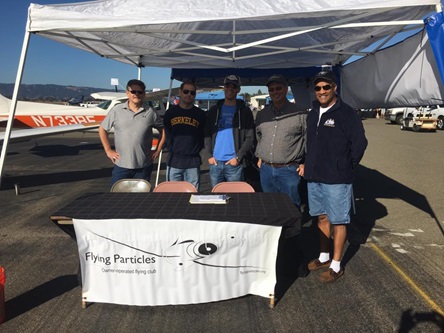 In addition to having information about your club, Gabe pointed out that there is value in having giveaways and non-club related information as well. “I’m going to have resources for pilots, like an SFRA one-pager, something they can use.”

One of the biggest benefits of participating in an airport open house is the potential for new members. A well-run and marketed event is going to attract a large crowd – sometimes tens of thousands. It’s a great marketing opportunity for the club and doesn’t take a lot of effort.

It’s no surprise the Flying Particles often would get 20 or 30 people interested in learning more about the club at the open house. Perspective members would follow up with a tour of the club aircraft and attend some meetings to get to know more members and get a feel for the club community. “Some of them decide to join the club and get back into flying,” Elliott said.

Participating in an open house is a way for a flying club to show its support for the local airport and promote the benefits of general aviation and flying clubs to both pilots and the general public. It serves as a marketing tool to attract new members, while providing club members with a fun activity that helps build camaraderie for existing members.