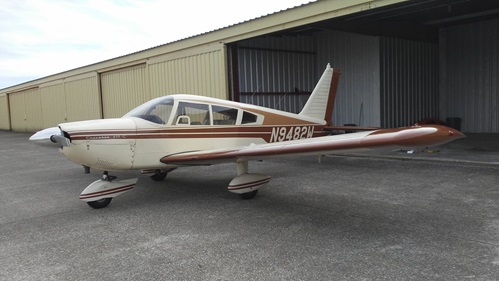 If the Piper Cherokee Six and Saratoga are the SUVs of Piper’s piston line of aircraft, the Cherokee 235/Dakota is the family station wagon. The often-overlooked high-performance aircraft is a true four-seat aircraft capable of carrying a full load of passengers and fuel. Club Founder and President Roy Cantrall of the Cantrall Aviation Flying Club based in Elizabethtown, Kentucky talks about the performance and benefits of having this high-powered Piper in a club.

The Piper Cherokee debuted in 1960 and its many variations have been the mainstay of the Piper fleet for 60 years. The first Cherokees were offered with either a 150 hp engine or 160 hp. The Cherokee 235 was introduced in 1963 to compete with the Cessna 182.

In 1973, the fuselage was stretched 5 inches to provide additional leg room for rear seat passengers and the name was changed from the 235 to the Charger. From 1974 through 1977, it was called the Pathfinder, although you’d be hard pressed to find many pilots who call it that. In 1979, the iconic Cherokee Hershey Bar wing was replaced by the tapered wing, smaller fuel tanks (77 gallons instead of 84), the fuselage was stretched another 7.5 inches and the model name was changed to Dakota, which remained in production until 1994.

The Cantrall Aviation Flying Club operates a 1968 Cherokee 235 with the six-cylinder Lycoming O-540 engine. It burns about 12 to 13 gallons an hour, but the engine is designed to run on 80/87 octane, which means it can run on auto fuel (mogas) or avgas.

“It is going to use a little more fuel, but the mogas cancels that out,” Roy said, noting the cost to operate a Cherokee 180, which can only take avgas, is about the same as operating the 235 with mogas.

An online search for Piper 235/Dakotas ranged from about $50,000 for early models to $160,000 for later Dakotas. Prices will vary depending on total time and avionics.

Maintenance
Maintenance isn’t a problem because it’s a Cherokee. Mechanics are familiar with the type and parts are plentiful. The club does its own oil changes every 50 hours, which cost less than $100 – half of what they would pay a mechanic. Roy didn’t have a good figure on the cost of an annual because the club has done other work, making improvements during its annuals. However, an internet search of various maintenance shops in several states found the base annual for a 235/Dakota ranged between $1,300 and $1,600.

Getting insurance hasn’t been a problem for the club, although rates have climbed since the club was formed in 2018. They currently pay $2,500 a year for a standard hull and liability policy, but their broker indicated rates are likely to go up.

The insurance company doesn’t have any specific requirements for check out, just what they would want for any club, Roy said. That includes the bylaws and the basic information about the pilots’ ratings, total time, and time in make and model. 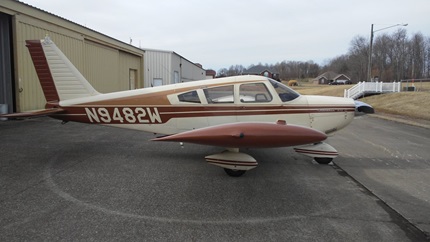 Cantrall Aviation doesn’t take non-pilots as members, so the plane is not used for primary training. However, Roy said, “I know people who have used them as primary trainers. I don’t know that I would. I’d go with something a little smaller.”

Although the Cherokee is a simple, stable airplane to fly, which is good for training, the 235 isn’t the best model for an inexperienced pilot. The extra horsepower and the constant speed propellor add a level of complexity that traditional trainers don’t have.

Additionally, the 235 has four fuel tanks—two 25-gallon tanks in the wings and a 17-gallon tank in each wing tip. The tanks are separate so there are four fuel gauges and four fuel selector positions, which requires serious fuel management discipline, and so could be a bit overwhelming for a new pilot.

That’s one of the hallmarks of the Cherokee line—the commonality of design from the two-seat Cherokee 140 to the Cherokee Six/Saratoga. This makes transitioning from the more basic models to the more complex aircraft relatively simple, an advantage when checking out club members who may not have flown a 235 before.

The main thing to get used to is the extra power and climb performance. “I’d come out of a 140 and jumped into that thing and it was like night and day, good gosh,” Roy said. “They climb like homesick angels compared to the 140.”

The club does have members that are using the plane for their IFR training.

This is where the Cherokee 235 shines. It holds 84 gallons of fuel and can carry four adults without a problem. The main advantage is that the aircraft can haul about its own weight in useful load. The plane’s empty weight is about 1,500 pounds and it can carry just over 1,400 pounds depending on the model.

“It is a true cross-country aircraft. I refer to it as the station wagon of the Cherokee line,” Roy said. “It will haul four people no problem and their luggage. If you’ve got a family of four, you can haul them and it’s no big deal. She just flies. It’s a marvelous airplane.”

The drawback to the 235 is the fuel usage. It burns about 12 to 13 gph. The big advantage is that the plane can fly on mogas without an STC. “The equalizing factor is we run mogas in ours. You can run regular 87 octane fuel through that thing and instead of paying $4 to $5 a gallon, we’re paying $2.80 a gallon,” Roy said. “So that’s an equalizer.”

Even with a high fuel burn, you could fly for 5 hours with an hour reserve. With a cruising speed of 125 knots, that’s about 600 miles. 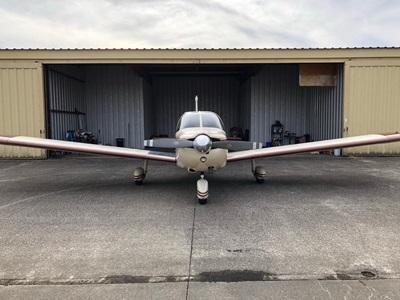 While a Cherokee is unlikely to turn heads or draw attention on a ramp, it is a good, reliable airplane that will get you in the air and back home again safely. “It’s fun. It’s just fun to fly,” Roy said. “I like to fly so it doesn’t matter to me.” I think a lot of pilots would agree.

Besides the joy of flying that it provides, the 235 has an advantage over most similar aircraft – you can take your friends with you. It’s always more fun when you are with others and that’s where the 235 shines. With its large useful load you can take three of your friends with you on fishing or camping trips and create some wonderful memories. Most airplanes you’d have to pick and choose who could come along and share your adventures.

If your club is looking for an affordable aircraft that can easily take a family of four on vacation, the Piper Cherokee 235/Dakota is a good choice.

It is a good, solid airframe that handles turbulence well and is easy for most pilots to transition into. It has good range, and if you use mogas, the operating costs are about the same as a Cherokee 180, despite having more horsepower and hauling capacity.

“It is a heavy hauler. Its claim to fame is that it will haul it’s weight, and it will,” Roy said. “If you can cram it in the cockpit and keep the center of gravity squared away, you can fly a thousand pounds in that thing and get away with it. It is a wonderful aircraft.”