When a club has multiple aircraft in its fleet there are two ways to go—have aircraft of similar type or have a variety of different aircraft. There are advantages to both.

Having common aircraft in your fleet can make it easier for members to transition between planes and provides members greater scheduling flexibility. For instance, the 150th Aero Club based at Morristown Airport (MMU) in New Jersey has four Cessna 172s so members can choose any of the club’s aircraft to fly. Another advantage is the increased safety factor that comes from the familiarity and comfort of flying the same type of aircraft, but this has some traps—see this month’s Question of the Month.

On the other hand, having a diverse fleet offers members different options to choose from depending on the mission they are flying. Having a Cherokee or 172 provides an inexpensive aircraft for the members who just want to get a $100 hamburger or do training. For members looking for more complexity, there are a variety of retractable gear options. A club looking for a fast cross-country airplane might consider a Cirrus, or if useful load is important, there are a few six-seat aircraft a club may operate. For something a little different, a club might consider adding a taildragger to its fleet. 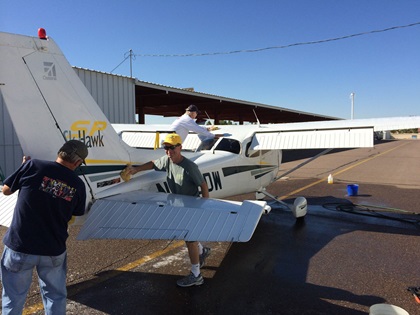 The Arizona Cloudbusters, based at Chandler Municipal Airport (KCHD) southeast of Phoenix, has experience with both models. The club had a fleet that consisted of a Cessna 172 and two Cessna 182s. When it was time to replace its older 182, about seven years ago, the members decided to upgrade to a retractable gear aircraft.

The decision to diversify the fleet was a game charger for the club. It changed the type of members the club attracted and broadened the type of flying the members do. For a deeper discussion of how aircraft selection can influence club culture, see the January 2021 Question of the Month.

When the club began the process of looking for a replacement aircraft, it evaluated the typical pilot profile, the typical mission profile, and then they surveyed members to find out what they wanted. The result was people “wanted something that was faster, that was more complex, that was more interesting, that was more fun to fly and would appeal to more pilots,” John said.

They also wanted something that had a little zing, something cool. The club considered the Cherokee Arrow and the Mooney variants, as well as a Cirrus, but that was beyond the club’s financial ability and was fixed gear.

“We were throwing around lots of options trying to find something that was a really good fit and we landed on the Debonair after evaluating multiple airplanes,” Club Treasurer and past President John Hartman said. 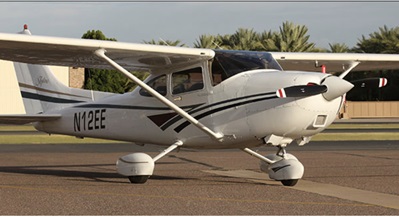 Replacing a 182 with the Debonair (See this month’s Aircraft Spotlight), provided the club with a fleet that offers something for everybody. “Honestly, the platform that we have and the fleet of airplanes that we have works really well for pilots who are looking to advance their flying skills,” John said. “Obviously the 172 is a great trainer and that’s a great place to get started. The 182 is a great step up to a higher performance airplane with a constant speed prop and more capabilities. Beyond that you can jump up to the Debonair and add the retractable gear and some additional speed. It’s a really good progression for most pilots.”

What makes the Debonair nice as the high-end aircraft in the fleet is that it’s not too complicated and is fairly docile. John said the main things new pilots have to focus on is remembering to put the gear down, learning the speeds since everything is a little faster, and learning how to slow it down in the descent. The other main point the club stresses for pilots transitioning to the Debonair is fuel management. Cessnas have a fuel selector option for both, which draws fuel from each tank simultaneously. The Debonair has four tanks – two main tanks and two wing tip tanks, each with a separate fuel selector setting, although you can cross feed the tip tanks. 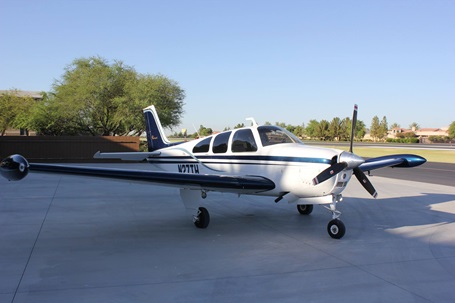 How the Debonair Changed the Club

Diversifying the fleet to include the Debonair had two big impacts on the club. The first was to change the pilot profile, and the other difference was in the type of flying members do, because the Debonair is a more capable cross-country aircraft.

“Before the Debonair we didn’t have a lot of instrument rated pilots. We were blue sky guys, VFR guys,” John said. “Once we got the Debonair, it really brought in a lot of more experienced pilots.”

When the club only had the 172 and two 182s, John estimates only three or four of the 45 members had IFR ratings. Once the club got the Debonair, that number increased to about a third of the members. He noted the club has quite a few airline pilots now, as well as other pilots that probably would not have joined just for a 172 and 182. “Adding the Debonair to our fleet really opened windows to bringing different people into the club,” John said.

Not only did the Debonair attract new members, but more members are also doing the additional training required to check out in the plane. Having a high-performance, retractable-gear aircraft allows members to earn their complex (and high-performance) endorsements and it encourages members to get their commercial certificate in addition to an IFR rating. More members are continuing their aviation journey through advanced certificates and ratings, and it promotes a safety culture in which members are continually improving their flying knowledge and skills. 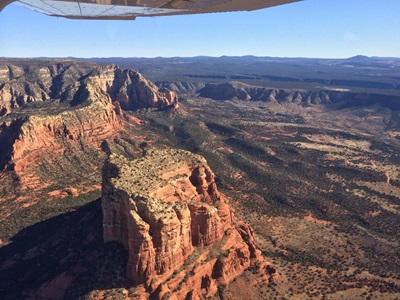 Having a more advanced aircraft has also changed the type of flying members do. Cross-country trips have increased significantly. “Pilots now realize they’re not just going to poke holes in the sky on a blue-sky day,” John said. “Now that we’ve got an airplane that is more capable, we’ve got guys that fly it all over the place.”

When the club only had the 182s and a 172, the cross-country flights weren’t very far. With the Debonair, John flight plans for about 155 knots and about 12.5 gph, and members have taken trips to places as far away as Utah, Northern California, and Oshkosh. The 182 has a similar fuel burn but at a slower cruising speed.

Although the Cloudbusters have variety in their fleet, they made a conscious decision to have similar radios in all of the airplanes by installing the Garmin GTN 750. “It’s nice to have the consistency of the radios,” John said. “If you get trained in the 172 it is easier to step up to the other airplanes.” Having common radios means there is one less thing members have to learn as they transition to the different aircraft.

He did point out the full avionics packages do differ in that the 182 has an Aspen EFD1000 Flight Display and MFD500 Multifunctional Display, which the other aircraft do not. The 172 has round gauges and the Debonair has round gauges with a Sandel eHSI. Although the avionics packages are not exactly the same among airplanes, having the commonality of the Garmin GTN 750 made a big difference in members transitioning to other aircraft, John said.

“Whatever airplane you fly, you’re already proficient at the radio,” he said. “It makes it easier to upgrade and fly the more sophisticated airplanes in the fleet because you don’t have to learn radios, you just have to learn how to fly the airplane.” 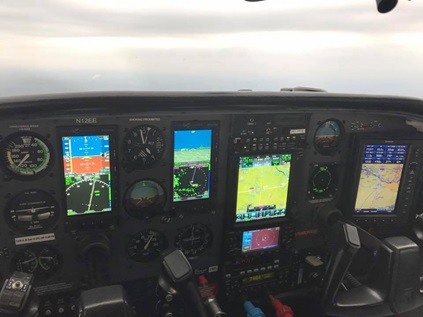 Operating a club with a diverse fleet has provided major benefits for the Arizona Cloudbusters. Replacing an older 182 with a Debonair has broadened the appeal of the club to more people and encouraged the existing members to seek advanced certificates, endorsements, and ratings. Having a faster, more complex airplane has helped turn what used to be a club of VFR-only pilots into one with members that have a variety of experience. The three aircraft are well suited for a variety of missions, whether it’s to get a $100 hamburger or go on a long cross country.

Adding the Debonair “has been a game changer for us,” John said. “It’s been a fantastic addition. We have more qualified pilots and more people doing additional training because the pilots realize we have an airplane that is more capable and they want to be able to fly it places.”