Aircraft Spotlight: The Beech Debonair Provides Clubs a Solid Platform for a Variety of Uses The Beech Debonair was first produced in 1960 and was a stripped down, straight-tail version of Beechcraft’s iconic V-tail Bonanza first produced in 1947. It seats four and the interior was more sparsely acquainted to keep the cost competitive with the Piper Commanche. Over the years, more options became standard with production continuing until 1995.

The Debonair offers a club a comfortable, fast, cross-country aircraft. It has retractable gear, a constant speed prop, and was produced with an engine ranging from 225 hp to 285 hp, providing a good platform for complex and high-performance endorsements, as well as commercial and IFR ratings. Club Treasurer and past President John Hartman of the Arizona Cloudbusters Flying Club based at Chandler Municipal Airport (CHD) in Chandler, Arizona talks about the benefits of operating a Debonair in their fleet, which includes a Cessna 172 and 182 (See this month’s Club Spotlight).

The purchase price on a Debonair ranges from about $75,000 to $175,000 depending on the engine, avionics and total time, making it a reasonable purchase. The Arizona Cloudbusters paid $90,000 for their current plane and “it was pretty well-equipped with a reasonably-timed engine and a three-bladed prop,” John said. This is the club’s second Debonair. The first one cost between $65,000 and $70,000 with a high-time engine that the club replaced.

Their current Debonair is a 1966 model with a Continental IO-470N, which has been upgraded from 230 hp to 260 hp. John flight plans for 155 knots while burning 12.5 gph. For budgeting purposes, the club plans approximately $160 an hour for variable costs to operate the Debonair, which includes fuel, oil, maintenance, engine reserves, and some avionics upgrades. For the 182, the club budgets $150 and hour and for the 172 they plan $130 an hour. 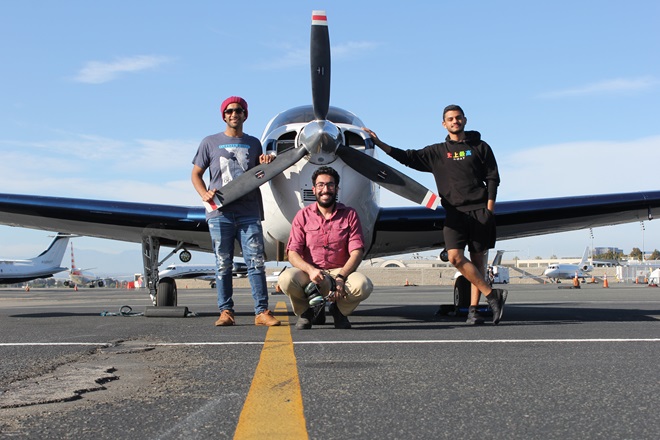 Maintenance (4 out of 5)
There are no surprises with the Debonair. It’s a solid design that’s been flying for more than 60 years and getting parts isn’t a problem. The club pays a base cost for the annual of about $2,500. “The cost isn’t that much higher than on the two fixed-gear airplanes,” John said. “The reality is there is not that much more to check on the Debonair. You just have the gear swing.”

John is an accountant by training and developed a spread sheet to track costs for each of the club’s aircraft. Although the Debonair is the most expensive, “it’s not prohibitively higher. It’s only $3 an hour more than our 172. Our 182 is actually the cheapest airplane to maintain,” John said. However, there are some avionics costs and upgrades that are included, which may skew the numbers slightly.

John noted that insurance rates have been increasing, but “remarkably the Debonair is not the most expensive to insure because of the hull value.” The club pays about $7,000 a year for the Debonair, and about $9,000 each for its 2001 172SP and 1997 182S.

The insurance company does require club members to have a minimum of 125 hours PIC and then 15 hours in type. If you have 50 hours or more in retractable gear aircraft, the insurance requirement is a minimum of 5 hours of dual in the Debonair to get checked out.  For a deeper dive on safely transitioning to different airplanes, see this month’s Question of the Month.

“It’s a pretty docile aircraft,” John said. “It’s really not that complicated other than you have to remember to put the gear down and know how to slow down in your descent.” The Debonair provides a good platform for high-performance and complex checkouts with the 260-hp engine, retractable gear, and a constant speed prop.

Although most club members do their IFR training in the 172 or 182 because of lower hourly costs, John said a lot of instrument currency is done in the Debonair, as well as some training. He also noted when the club fleet consisted of a 172 and two 182s, the club members were almost exclusively VFR pilots. Adding the Debonair brought in more experienced pilots and now about a third of the club members are IFR rated. The one thing to be mindful of is the fuel management. The Cloudbusters’ Debonair has tip tanks in addition to the mains, and you have to switch between the four tanks. John mentioned you have to burn 13 gallons off the left tank before you can burn anything off of the other tank. Excess fuel gets returned to the left tank and he said you don’t want blow fuel overboard. The tip tanks do have a cross feed, but John prefers to burn each tank separately to know exactly how much fuel he has used in each tank. 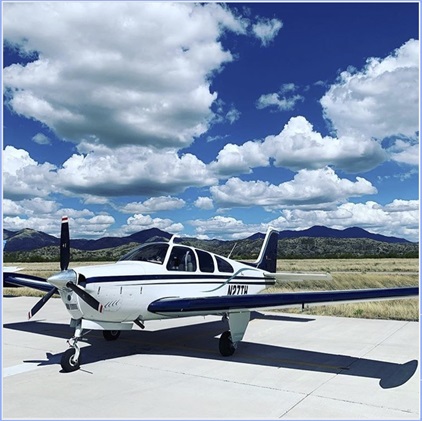 “It’s a fantastic cross-country airplane. It’s solid, it’s fast,” John said. “That’s really the appeal to the Debonair. I flight plan at 155 knots. We have tip tanks, so it’s got lots of endurance. You can fly the thing forever.”

The plane has a fuel capacity of 90 gallons, 84 which are usable. The mains have 44 gallons usable and the tips 40 gallons usable – 20 gallons per side. With a fuel burn of 12.5 gph at 155 knots, it can take you a long way. Members have flown the Debonair to Oshkosh, Utah, San Francisco, northern California and the Northwest. Some have also flown to Mexico.

The useful load is 1,026 lbs., which John said really makes it a three-passenger aircraft with full fuel. Depending on how much fuel you’re carrying, you can put four adults in the plane. John did say you need to watch how much weight you have in the back seat. “If you burn off too much fuel, your CG moves too far aft. That is one of the challenges of these Beechcrafts is making sure you’re always in your CG window,” John said.

The Debonair is so much cooler to fly than the 182, John said. “It’s more like flying a sportscar than a pickup truck. It’s just sleek, it’s cool.” He added, “You’re proud of it when you land and you roll up to parking. People look at it. It’s a fantastic cross-country machine and it’s got pilot appeal. Pilot’s love that airplane.”

He also talked about how the Debonair fits well in building the experience and skills of the club’s members as they step up from a 172 to a 182 to a Debonair. “You feel like a real pilot when you step up to the Debonair.”

For a club looking for a four-seat, complex, high-performance aircraft that can be used for advanced training or travel at a reasonable price, the Debonair is a great option. It’s economical to operate, it’s fast and has good range. When the Arizona Cloudbusters were looking to diversify their fleet, the Debonair was an easy choice.