Pete Dawson’s friend had been talking to him about going flying in a Cessna for a while. “I kept telling him I won’t know what I'm doing,” Pete said. “I'm pretty nervous and way out of my league.”

That’s not what you would expect to hear from a 10,000-hour airline captain. For many professional pilots, once the cockpit becomes their office, flying General Aviation (GA) aircraft becomes part of their past. They lose their GA proficiency and can be intimidated by flying single-engine aircraft, but they are very eager and really enjoy getting back to this type of flying, Pete said. “Flying a normal number of hours each year in GA aircraft would be the same for any pilot to maintain proficiency and now, thanks to our club, I love it.”

If airline pilots can be intimidated flying GA, why would your club want to have members who are professional pilots in its ranks? “In any organization, you've got to have a variety of subject matter experts,” Pete said. “In a flying club, get a couple of pilots, mechanics, ATC, lawyers, accountants, business owners, writers, marketing professionals, etc. that aren't doing those jobs just for fun. Professional pilots bring value because we’re trained to share aircraft. We are often experienced in policy writing, policy reading, and how to make it work.” 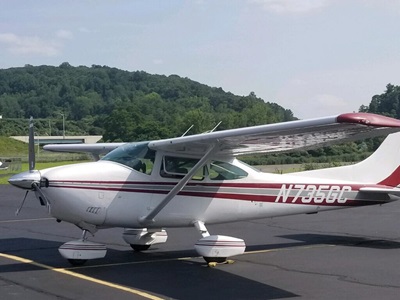 What’s happened at the Oxford Flying Club based at Waterbury-Oxford Airport (OXC) in Oxford, Connecticut, is the creation of a safety culture that encourages open dialogue and discussion. Oxford has about 100 members, with about 20 professional pilots. Most are either flying for, or retired from, the airlines, although some members have a corporate or military background.  Pete said the 50 to 60 active members are on pace to put about 1,800 to 2,000 hours on the club’s four planes this year. The fleet is made up of of two Piper Archers, a Cessna 172 and 182.

When Pete joined the club two-and-half years ago it had been about 10 years since he had flown GA. Like most professional pilots, he had a lot to relearn – things like VFR airspace, preflight and postflight inspections, understanding VFR weather decision making, filing a flight plan, and getting reacquainted to a very different sight picture.   See this month’s Question of the Month: How Do I Get Back into General Aviation After a Career in the Airlines?

While you might expect an airline pilot to be proficient in all of these things, they’re used to flying as part of team—dispatchers are checking the weather and doing flight plans, mechanics are looking over the plane, and professional pilots are always flying in controlled airspace. However, what professional pilots are good at is learning a new plane, reading the POH, and following procedures, rules, systems, and structures.

At work, Pete serves on his union’s safety committee as well as the aero-medical committee so he and other professional pilots brought that experience to the flying club. It’s similar to having a member who is a CPA bring a professional approach to a club’s finances.

“I want to work on club policy and make sure we're following the regulations,” Pete said. “Professional pilots aren’t intimidated by the complexity of regulations and can build new protocols for a club environment.”

The club has a 12-member Safety Committee with representatives focused on specific areas—like ramp and ground operations, flight operations, and mechanical issues. It has a safety report that members are encouraged to fill out any time there is an incident or squawk. Think of it as a club version of a NASA report.

When an issue comes up, Pete will call the member, have a conversation and encourage them to fill out the voluntary, confidential safety report, if they haven’t already. The goal of the report is to learn what happened and share it with other members as a teaching tool, not as punitive measure. The reports allow the safety committee to identify trends and take corrective action if necessary.

“One person's mistake and confession results in the club itself being safer,” he said. “Having a safety management system at our club has added a significant value.” 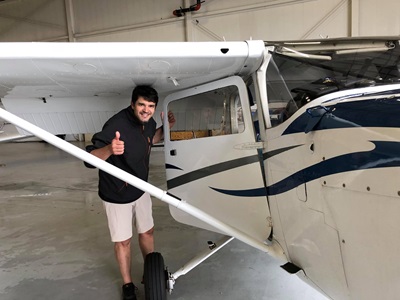 This year the club is on target for about 20-25 safety reports, which gives the safety committee the ability to look at trends. They use the recommended risk matrix concept from the Advisory Circular to assess the situation and then reach a committee consensus for actions.

The notes from safety committee meetings are included in the safety officer report each month and the safety reports are published on the member-only portal of the web site, to which all members have access.

“The safest thing to do is discuss mistakes in front of people where we all end up learning. The accusation model never works. We don't allow that at all,” Pete said. “We want to get to the root of the problem and see if we can prevent it from happening to someone else.”

Pete talked about how too often the pilot mentality is “I’ve got this. I know what to do. Leave me alone.” Professional pilots whose livelihood depends on doing things safely are more apt to ask questions and seek advice.

“If you get yourself in a pickle or you’ve got questions at work, we use this term—expand your team,” Pete said. In the club he’s helping create the culture where if you have a question, you should reach out to one of the 100 other members, because many of them have years of experience. “Call one of them. Everyone is here to help.” Having those conversations and talking about scenarios and lessons learned, like waiting too long to add power and go around or diverting on a VFR flight at night with weather ahead, takes seemingly embarrassing events and makes them a badge of honor of sorts.

“These are good conversations because it starts to make the things that historically have been uncool in GA, cool,” Pete said. “These are the conversations we have professionally in the industry. It's hard to grasp in a magazine. It's really better talking in a hangar and that's what a club is here for.”

Besides improving safety, the SMS develops a basis of trust and camaraderie among the membership and club leaders. Having open discussions has helped create a more caring and forgiving attitude among members. Instead of members being upset that something was missed on a post-flight inspection, like leaving a soda can in the plane or not fueling for the next pilot, they’ll often call or email Pete and report what they found to aid in data trends and club training events.

What’s the big deal about leaving trash in the airplane?

“When you leave your Coke can in the holder, it really aggravates people and you've created a distraction,” Pete said. “You're putting that person in one of the NTSB’s Most Wanted List categories [for causes of accidents]. Who knew these little things can end so badly? No pilot intentionally leads another pilot into trouble, but now that we know how little things can be so important, we’re a better team and therefore club.”

The NTSB each year puts out a list of problems that are trending higher. Professional pilots are used to looking at these trends and looking at ways to mitigate them. “That's a conversation that almost any professional pilot could have,” Pete said. If given the opportunity to have those conversations in a club, it will benefit every member, particularly lower time pilots.

“One of the things that they [the NTSB] have caught on to, and we've caught on to as well, is PDA usage while you're doing a preflight,” Pete said. A pilot might be texting or talking on their phone during preflight. Maybe they are looking at weather or doing something on ForeFlight while checking the airplane. If that is the case, what is the pilot not doing? They’re not checking the airplane. Things are being missed.

The club generally has three or more safety courses each year that are held on a Saturday from 9 am to noon. They’ll discuss recent topics and trends that they’re seeing based on the safety reports. At one of the recent courses, Pete reminded members of how most accidents occur during routine flights. 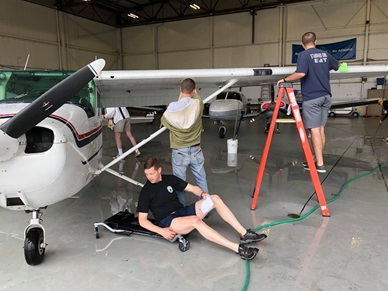 “If you look at the accident data, the most common flight in the NTSB accident records is a flying club type of flight,” Pete said. “It is a common aircraft at a common airport. A good weather day with familiar pilots or passengers. The descriptions of the most common accidents are happening on a day that is almost every single flight at a flying club like Oxford Flying Club, so we break it down to mitigate known threats.”

With that preface, it set the tone for the importance of paying attention to detail and doing the little things correctly. One of their recent courses focused on proper and expanded pre-flight and post-flight procedures and club policies to ensure members are leaving the planes ready for the next person.

“We're starting to have a culture that if something is caught by another member, they call up to ensure the other member knows how to do it right,” Pete said. “They’ll say, ‘I don't know what was on his mind, maybe he was really rushed. I think there were several things missed, you might want to talk to him.’ Learning from these casual, unintended mistakes can become a new habit for that pilot or help build a stronger eye for life!”

Having professional pilots in your club will add experience and knowledge that can be shared, and that benefits all members. As experts in safety management systems, flying shared aircraft, and developing policies and procedures, professional pilots can enhance a club by building a true safety culture that strengthens trust and camaraderie.

“I’m really enjoying the conversation at the club lately because the system is working,” Pete said. “When a group of people want safety to be involved it becomes a powerful tool.”