He and Kevin Collom have partnered to found the Bald Eagle Aviation Club in Kalispell, Montana. The club has the distinction of being the 150th flying club created as part of AOPA’s Flying Club Initiative.

“We all love aviation. That’s what we do and why we’re here,” Mike said.

What made the difference in forming the club were the resources, coaching and encouragement from AOPA and the mentoring from another club. “I would highly recommend contacting the AOPA Flying Clubs staff,” Mike said adding, “and it’s really advantageous to borrow from somebody else,” referring to the mentorship he received from the Twin Cities Cloud 7 Flying Club.

Mike got his private pilot’s license when he was an 18-year-old freshman at the University of Oklahoma. The next year, Mike transferred to Iowa State University and joined the school’s flying club, eventually becoming the president.

The Iowa State Flying Club didn’t have an airplane, but the faculty advisor owned a Mooney and would take members flying. There were two guys in the club who owned taildraggers and other members would rent from the local FBO.

“It wasn’t anything like today’s flying clubs,” Mike said. But it did give him his first experience of being in a club – a long time ago. Mike is in the process of applying for the FAA Wright Brothers Master Pilot Award given to pilots who have 50 years of flying experience.

The Genesis of the 150th Club

The creation of the Bald Eagle Aviation Club began when Mike retired and moved to Kalispell from Colorado. He was looking for opportunities to get involved with aviation in his new home and found a good aviation community, but no clubs.

“We have two airports, Glacier Park International (GPI) where the airlines fly and Kalispell City Airport (S27) where we are based,” Mike said. “There are two grass strips not that far away. There’s a lot of aviation activity and I wanted to be part of it. I decided a flying club was the way to go.” 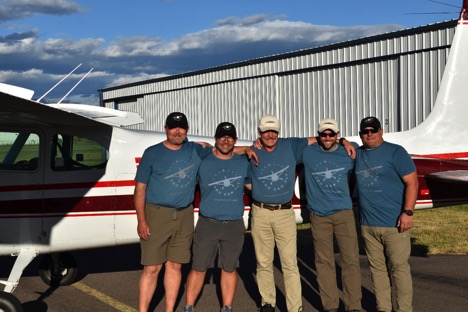 It’s something Mike knows about. He was the maintenance officer and a board director for the Twin Cities Cloud 7 Flying Club in Minneapolis where he lived before moving to Colorado (See the August 2014 Club Spotlight). “It is an excellent club that has been in existence for over 50 years,” Mike said. “I was a member for 15 years or more. That was my upbringing and training of what a flying club can be, should be and what I’d like it to be if I ever started one.”

Mike reviewed the resources and continued to email and call Steve with questions. In June 2018, he attended the Maximum Fun, Minimum Cost seminar on starting a flying club that Steve presented as part of AOPA’s Regional Fly-In in Missoula, Montana. Soon after that, Mike entered Bald Eagle as a club-in-formation on AOPA’s Flying Club Finder.

Around the same time, Kevin Collom, a student pilot, reached out to AOPA about possibly starting a club in Whitefish, Montana, about 15 miles north of Kalispell. Steve connected Kevin and Mike and suggested the two consider working together.

Although Kevin is a student pilot new to aviation and Mike has been flying for decades, the two share a common vision: “To provide affordable access to aviation through the flying club with planes and training. It’s a goal of ours to further aviation and to foster new pilots into the aviation world.”

Mike and Kevin not only got assistance from AOPA, but they also reached out to Cloud 7 for guidance. “Steve Bateman had been very helpful. He shared the bylaws from his club and I also contacted the Cloud 7 Club in Minneapolis and they shared their bylaws,” Mike said. He and Kevin decided to base Bald Eagle’s bylaws on what they got from Cloud 7 for a few reasons. For starters, Mike had first hand experience with the club and how it ran. The bylaws were extensive and detailed about multiple aircraft operations – a goal that Bald Eagle aspires to, and the club has been successful for more than 50 years.

Getting mentorship from another club was a big benefit. “If you can do that, I’d highly recommend it,” Mike said. “Why reinvent the wheel? Particularly if you’re just getting started or have never been in a club. It’s really advantageous to borrow from somebody else. We pretty much plagiarized most of their bylaws.” 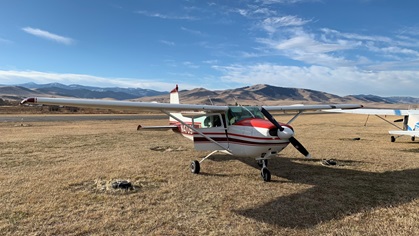 By January of 2019, the two filed the paperwork to incorporate the club as a 501(c)7 non-profit corporation and began the work of recruiting members. Often times, clubs in formation find the legal aspect of forming a club to be the most challenging part of getting started. That wasn’t the case for Mike and Kevin. Finding members was the tough part.

“I had been in business for a long time and formed other corporations, so the paperwork was not the problem,” Mike said. “We were fortunate to have help from Cloud 7. Our biggest issue really was just recruiting.”

It’s a bit like the age-old question of which came first, the chicken or the egg? And it’s an issue many clubs in formation have. You need to attract enough serious members to be able to purchase a plane, but the first question a prospective member will ask is what kind of plane do you have? When they learn the club doesn’t have one, many will say, “Call me when you do.”

That was exactly the dilemma Bald Eagle found itself in. “We tried to form the club with no airplane by advertising and talking to a bunch of people. That didn’t work,” Mike said.

When they began looking for members, they found a local person that was selling a Cessna 182 and a Citabria. “We thought this would be great, we could start with these two airplanes,” Mike said. “We could do a little back country flying, some aerobatics, we’ve got a traveling airplane.”

So that’s what they advertised. To start, the club created a web site. Mike and Kevin met a pilot named Chris Sund who was a website developer. He volunteered his time and helped them create a web site and Facebook page. They were hopeful he would join the club, but he ended up partnering with someone and buying a 172.

A website and Facebook pages are must have items for any club in the digital age, but they are passive forms of marketing. The user has to find you. So the next step was to proactively introduce Bald Eagle to the community. 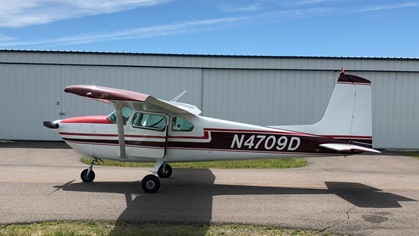 They sent 500 picture postcards out to pilots in the Flathead County area and printed 100 flyers to put up around town inviting people to join the Bald Eagle Aviation Club. They got the list of pilots from the FAA pilot database.

“We went around and put the flyers anywhere we could put a pin in the wall – grocery stores, bars, gas stations, bowling alleys, anywhere a person walks into,” Mike said. “We thought we’d get a really good return [from the postcards] and unfortunately that didn’t work out that well. But that was our major advertising.”

Without attracting any members through the postcards, Mike and Kevin figured, “Maybe we need to own this airplane or airplanes before people are going to join,” Mike said. “They want to see and feel and touch the plane before they invest.”

They could not afford both airplanes, so they formed an LLC to buy the 182 in October last year and then purchased a hangar. During this time George Weyl contacted Mike and soon became the club’s first new member. George is a captain for Delta Air Lines who was moving to the area from Atlanta. He is a CFI and agreed to serve as a flight instructor for the club’s members.

Throughout the spring and summer, despite COVID, the club’s name was getting out there and four new members joined to reach the target of seven. One new member, Ben Petro, is a CFI and he recruited his brother Ethan, who is a student pilot. The other members are Tom Dolan and Seth Berglee.

Transitioning to an Operational Club

Now that the club has a full membership, they’re in a transition. They are setting a monthly meeting schedule and working to build a culture of camaraderie, contribution, and friendship. “Flying is fun, but belonging to a flying club should be as well,” Mike said. “We want everyone involved in the operation and management of the club. I think that builds camaraderie.”

George was recently elected president and the club wants to add more members and aircraft. Before they do that, they have some organizational work to complete. Mike and Kevin formed an LLC to purchase the plane and hangar and the club is in the process of developing a lease to buy agreement to acquire the assets from the LLC and go from a non-equity club to an equity club over time. 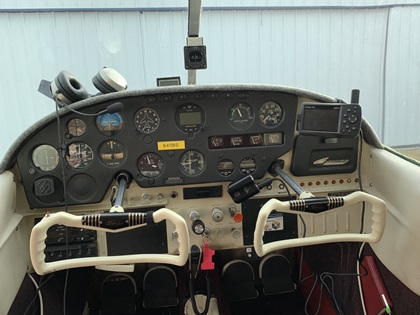 “I think our membership and I are in agreement we want to grow. We want the next seven members,” Mike said. “The thing that growth does is bring on the next airplane. My desire is that we have a selection that includes a trainer, high performance, and ultimately a retractable gear aircraft.”

Mike also is interested in exploring adding drones to the club. He has his Part 107 license although he hasn’t done much drone flying. “I recognize that it is very important because it’s dramatically changing aviation,” Mike said. “We all share the same airspace. We have to be knowledgeable and cognizant of what’s going on in the UAV world.”

He envisions the club buying higher end drones that could cost several thousand dollars, which not everyone can afford. It would be a way to attract Part 107 pilots to join the club. He noted the Air Force and Civil Air Patrol are flying drones and they are becoming useful and necessary in many applications.

But more importantly, “it’s an entry point into aviation. I think it would be useful if we had more conversations and had drones in a club where people can fly either fixed-wing or UAV or you could do both and have fun,” Mike said.

Advice for other clubs in formation

When asked what were the most important things they did to form the club, Mike has three simple points:

“Involve AOPA in your startup process, very definitely. Don’t expect it to happen overnight, and try not to reinvent the wheel,” Mike said. “You can find the documents from AOPA or other clubs. There are flying clubs all over the country now. It’s all out there somewhere.”

Mike also noted that it isn’t a short process so “don’t get discouraged if it doesn’t happen overnight." 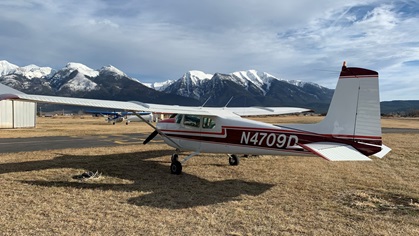 That may be the best reason to work with AOPA. “[Flying Clubs Director] Steve [Bateman] was always encouraging like a coach,” Mike said, “AOPA provides information, they train you, and they encourage you along the way…and we appreciate it. They have been a great asset to us, not only in providing documents, but Steve was always available to us when a question came up. I can’t say enough good things about AOPA.”

There are five You Can Fly Ambassadors around the country (See August 2020 Resource Spotlight and Club Spotlight), along with Steve Bateman and Flying Clubs Initiative Manager Drew Myers at headquarters that can answer questions, provide information and help clubs get off the ground.

It was that coaching and encouragement that kept Mike and Kevin going, even when their initial efforts to recruit members weren’t as successful as they had hoped. They kept plugging away and the result is the 150th flying club AOPA has helped create. Doing the work to get Bald Eagle Aviation Club operational, particularly in an area without a club, has been rewarding. But Mike and Kevin don’t plan to rest on their accomplishments.

“We still have work to do. We’re not finished, but we know where we want to end up,” Mike said.  “It’s fun forming a flying club and it’s fun working with AOPA.”