Aircraft Spotlight: The Stinson 108 Combines the Romance of Early Aviation with Utility

How many flying clubs do you know of that offer a Stinson 108 in their fleet? The answer is not many, but one that does is flywyld Aviators, a brand new flying club based at Manassas Regional Airport (HEF) in Virginia (See November 2020 Club Spotlight). There are clubs that operate smaller taildraggers – Cubs, Champs, and even a Taylorcraft or Husky. But it’s rare to find a club with a four-seat taildragger. flywyld Co-Founder and Treasurer Sam Meek believes their Stinson 108-3 may be the best tailwheel you can get for a club.

“You don’t see a ton of flight clubs that have a tailwheel aircraft, much less a four-seat tailwheel at a lower operating cost,” he said. “Beyond that, it has some incredible heritage. The Stinson was originally made for ranching operations. It’s designed for short field operations. Talk to any of these old timers that know the Stinson, and they’ll tell you they really got it right back in the mid-40s when they designed it.”

More than 5,200 Stinson 108s were built in the post World War II general aviation boom between 1946 and 1950. The Stinson 108 and 108-1 are powered by a 150-hp Franklin engine, and the 108-2 and 108-3 have the 165-hp Franklin. The aircraft is constructed of steel tubing with a fabric covering, although some were later metalized. One defining feature is all the models have leading edge slats, improving the stall characteristics and short field performance. The 108-3 has a distinctly larger tail design. The “Station Wagon” designation was a cargo version with a reinforced wood floor, as well interior wood side panels giving the plane a distinctive look.

Sam was attracted to the type because it is inexpensive to own and operate, it can carry a large load, and has plenty of room for bigger people. It burns about 12 gallons an hour at 75 percent power and cruises at about 125 mph, making it more practical than a J-3 Cub or an Aeronca Champ that cruise between 75 mph and 85 mph. Fly Wyld charges $105 an hour, Tach time, wet.

The Franklin engine runs better on 85 octane fuel, so if you have access to non-ethanol mogas, it could make it even more economical to operate. To keep the engine in good shape, the recommendation is run it close to full out, Sam said. “When you’re flying, you really back it off just a touch. You fly at 2,600 rpm to 2,650 rpm. You’re pretty close to redline, but that’s what the engine prefers.” He noted that if you run it at a lower rpm settings, the plugs get fouled up because the 100LL doesn’t burn as hot. 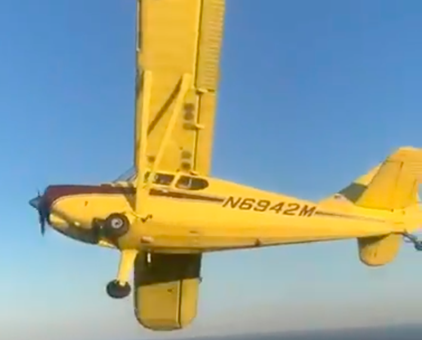 Maintenance (3 stars)
“It’s an older airplane,” Sam said. “Older airplanes will always have quirks.” One of those quirks is the Franklin engine. Franklin engines were used to power a variety of aircraft and helicopters, such as the Bell 47, during and shortly after WWII. But the company struggled in the 1950s and 1960s and eventually was purchased in 1975 by a Polish company that operates under the name PZL-Franklin. Finding parts could be difficult, but things are changing.

“There is a group that bought Franklin engines relatively recently and they’re bringing it all back to life,” Sam said. “That’s changed things pretty substantially for getting Franklin parts.”

While servicing a Franklin had been a challenge, it is well worth it. “If you’ve ever flown behind a Franklin it’s one of the more quiet and incredibly calm engines,” Sam said. “There’s almost zero vibrations. It’s one of the most surprising things about the airplane.”

The plane takes 100 mineral oil and it doesn’t have an oil filter, it has an oil screen. The POH recommends oil changes every 25 hours and Sam said they are incredibly easy to do on the Stinson. He also said, “Stinsons are really oily. You open up the cowl and there is oil all over the thing. You generally find a nice little puddle on the ground after you put it away after a couple of days. That’s nothing to be scared of. It’s called the Stinson leak. If you don’t see oil dripping on the floor, there’s probably no oil in it. Like a radial.”

There is an active type club called the International Stinson Club that has a web site and Facebook page, that is helpful in providing information. “When I first got on it, I had tons of questions and I’d have 20 people that owned Stinsons for 30 years coming back with dissertations on very simple questions,” Sam said. “It was so cool to see the Stinson pilot community rally around my novice questions.”

Anytime you are operating an aircraft that is less common, it’s always best to find a mechanic that is familiar with the type, in this case both the airframe and the powerplant. Sam hasn’t had to annual the plane yet, as he purchased it this spring. But based on conversations he’s had, and taking into account the DC area is more expensive than other parts of the country, he expects the annual to be anywhere from $2,000 to $4,000.

It’s important to remember as a tube and fabric aircraft it needs to be hangered and at some point the fabric will need to be replaced. Generally that could be every 20 to 25 years. 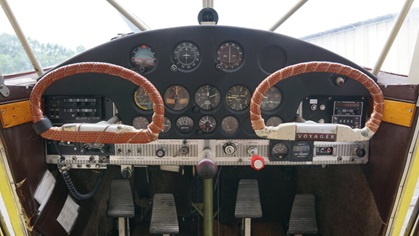 Insurance for the Stinson is roughly $4,500 to operate it in the club, Sam said, compared to $3,000 to insure it as an individual owner. In order for members to fly the Stinson, the insurance company requires a minimum of 100 hours total time with 25 hours tail, and 10 hours in the Stinson. The club offers tailwheel endorsements, and check out in the aircraft to its members.

Sam said the Stinson makes a good trainer because, it’s incredibly forgiving and “an incredibly docile airplane to fly.” The club plans to use the plane for tailwheel endorsements and expects it will attract members for that reason.

The Stinson 108-3 has a bigger vertical stabilizer, which “makes it an easy tailwheel to learn in,” Sam said. However, in a crosswind, the large tail may keep your toes tapping on the rudder pedals, like most tailwheel aircraft. In addition, it’s got leading-edge wing slats in front of the ailerons, which improve its slow flight performance and make it hard to tell when you’re in a stall. “That’s one of the things they teach you when you learn to fly the Stinson. There’s something called the Stinson mush,” Sam said. “You can be fully stalled, all the way stick back and still have aileron authority.” 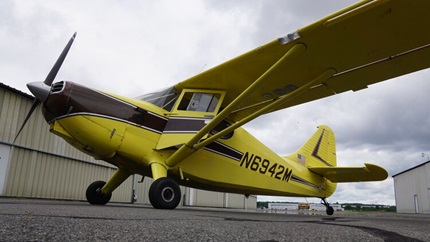 “It’s a phenomenal cross country machine,” Sam said. “You can get to 125 mph and she cruises nicely. You’ve got 50 gallons of gas, so you get some fairly significant range.”

But more importantly, the Stinson 108-3 has a useful load of 1,062 pounds, making it a true four seat aircraft with full fuel. And it’s roomy enough for bigger pilots. Sam is 6’-2” and 270 pounds and his wife is tall as well.  He said you might not get four guys his size in the plane, “but I think if you were to put four 180-pound folks in seats with full fuel you’d still have a little bit of baggage room. That was pretty attractive.”

“Every time I get in the Stinson I use the term romantic, because it is,” Club President Mike Webb said. “It has hardwood floors. It has hardwood veneer across the dash. The seats have that old school leather with the buttons pressed into it. It’s an old, romantic airplane. It really is.” 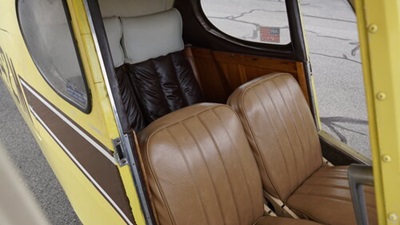 And who doesn’t love an airplane like that? Sam added, “Anyone we’ve taken up in it really takes to it. It’s a lot of fun.” He also describes the plane as a “a sporty little thing. But not too sporty – we’re not talking Extra 300 sporty.”

The Stinson 108 is “a true four seat, full fuel, get up and go airplane,” Sam said. “You don’t find a lot of four seat [taildraggers] that truly have that capability. Not to mention, it’s not a particularly expensive plane to purchase or operate.”

It’s roomy, it’s forgiving, and it’s a lot of fun. flywyld is focused on member experience, and they believe one of the best ways to do that is to provide variety of aircraft. Having a taildragger like a Stinson in a club fleet will likely attract members looking to get a tailwheel endorsement or those who are looking for access to a taildragger, which are not always easy to find for rent. In fact several members joined the club just to fly the Stinson.

“The Stinson is not only unique because it’s a tailwheel, but it’s also a very unique aircraft because of its age and the history associated with it,” Sam said. “The Stinson is very attractive. It’s just a classy airplane.”