Flying Clubs Club Connector Newsletter Club Spotlight: It’s All About the Experience with the OZ1 Flying Club and its Fly Outs

Club Spotlight: It’s All About the Experience with the OZ1 Flying Club

When Dorothy was swept up by a cyclone and landed in OZ, she seemed far from her Kansas home. Little did she know that for pilots, OZ is just to the east in Arkansas. And there is a flying club that is taking advantage of the local wonders in the region through monthly fly outs.

OZ1 Flying Club is like few other clubs in the country. “It’s more of a European-model flying club where it’s kind of your third place,” Club Director Jordyn Haught said. “We want to make this a community  spot where anybody who is interested in aviation can come and have that central gathering place to connect.” 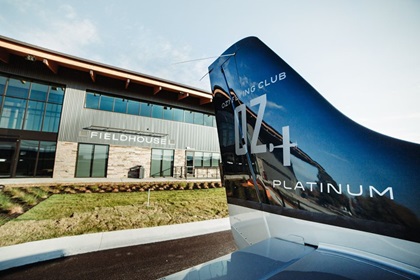 The club is based at Bentonville Municipal Airport/Louise Thaden Field (VBT) in northwest Arkansas and takes its name from the Ozarks. The mission of OZ1 is to make flying more accessible, as well as to be a place where aviation enthusiasts can be part of a community.

“If you want to be a pilot yourself, here are the highest quality aircraft with the absolute highest quality of service and maintenance at your fingertips,” Jordyn said. “Even if you’re not interested in becoming a pilot, there is a vibrant aviation community here that you can click right into.”

The club has a particular focus on backcountry flying to take advantage of the many unimproved strips in the region, which offer access to the variety of outdoor activities in the Ozarks. To get an idea of the backcountry options in the region, check out the Airfield Guide at www. airfield.guide, which is a national “repository for information about out-of-the-way airports and places that most pilots don't know about.” The Airfield Guide started in Northwest Arkansas and has partnered with the Recreational Aviation Foundation to become a national database.

More than a flying club, OZ1 is a lifestyle. Out of 174 members, 54 are flying members who have access to a fleet of seven aircraft. The other 129 are social members – and most, 70 percent of social members, are pilots who pay $35 a month dues. “Pretty much everyone here on the airfield who owns their own plane is a social member,” Jordyn said.

So what would make a pilot who owns their own aircraft pay monthly dues to a flying club and not get use of the aircraft? In short, access to an amazing facility and three monthly events, including a regular happy hour to celebrate members achieving aviation milestones, the “Tales from the Cockpit” speaker series with guests such as a National Geographic photographer and aerobatic pilots, educational events for Wings credit, and fly outs that are much more than the usual flight for breakfast or a $100 hamburger. The club is housed in what is known as the Fieldhouse – a gorgeous building that opened in the fall of 2018, the same time the club was founded. It features a public restaurant on the first floor, meeting rooms, the airport FBO and flight school. It also is home to the OZ1 clubhouse – a private, members-only section accessible through a hidden door that requires a keycard to gain entry. Inside it features windows on two sides facing the runway, a bar with discounted drinks, and a dedicated server from the restaurant. It’s not hard to imagine this is the nicest flying club facility in the country.

Its fleet has something for everyone – a Cirrus SR22, a turbo SR22, a Cessna 182, a backcountry 182, two Aviat Huskies with tundra tires, and the club just added a Cessna T206 in late February. That diversity allows the club to offer a variety of fly outs that are a mix of one day or weekend adventures. Fly Outs for Any Interest

“As you can tell by looking at our fleet we have very mission specific planes. I try to offer a mix of fly outs – paved vs. grass; overnight vs. one day; cheap vs. expensive; outdoorsy vs. pampering,” Jordyn said. “About half of our fly outs are either short strips or grass. For those we take the two Huskies and the backcountry 182.”

What catches your fancy – fly-fishing, kayaking, rock climbing, and camping? Or maybe something more sophisticated like a horse race, boutique hotel, and five-star dinner. If you prefer more aviation-oriented events like Oshkosh or Sun ‘n Fun, OZ1 offers that too. And whether you are a pilot or not, any member can participate.

The fly outs are generally offered as a package deal with one price for the experience, plus flight time. For instance, the March fly out is to Horseshoe Canyon Ranch where “they have outdoor climbing walls on beautiful exposed bluffs near the Buffalo National River,” Jordyn said. “We’re going to fly in there, we’ll have experienced climbing guides to do a half day climb with us and they have some cool rappelling and a zip line.”

There’s also a café with a culinary institute trained chef from New York. “It’s an amazing little place in the middle of nowhere,” Jordyn said. The cost is $80 a person plus flight time, which is about $100 per person if you have four people in a 182. The club handles all the logistics – transportation from the airport to the climbing center and restaurant, as well as reservations.

The February fly out was a little more high end, and a la carte from a pricing standpoint. The trip was to Hot Springs to go to the horse races. Jordyn booked a block of rooms at a boutique hotel and offered two price levels – $130 or $230 for a night, made reservations at a five-star restaurant that evening with participants responsible for their own bill, and offered either a morning bike ride or participants could go to a spa and choose what services they wanted. The club provided shuttle service from the airport to races, and then to the hotel. They also offered to shuttle bikes from the hotel to the bike trail in the morning.

The club handles all the logistics and planning. For each event an email invitation is sent to members with the fly out details and an RSVP button. It’s first come, first served for both pilots and passengers. “The folks that want a specific plane, they tend to call them fast,” Jordyn said. “You know, I want Romeo Kilo (the backcountry 182), I want 6 Victor (the standard 182), I want one of the Huskies. Folks make their call and I set them up. It’s the same thing for passenger seats, first come, first served. I start making a list and placing people as I have space.” An average fly out is about five aircraft, but they have had as many as 10 for a single event. She said it’s like playing Tetris. Jordyn figures out what aircraft are going and who has empty seats. This includes the social members who come along in their own aircraft. Passengers pay their share of the hourly rate if they’re in a club plane or share the fuel costs if flying in a privately-owned member aircraft.

If there aren’t enough seats for all the passengers, Jordyn has been able to convince one of the flight school instructors and Summit Aviation, the flying school, to help out with a 182 or the J-3 Cub. So far, they’ve never had to turn away a passenger.

Working with the flight school is just one example of the connections and community that OZ1 has leveraged to offer the fly-out experiences to their members. For example, one member owns the Buffalo Outdoor Center, where the club is going in November. It "has some of the most beautiful cabins and experiences in the whole state of Arkansas," Jordyn said. 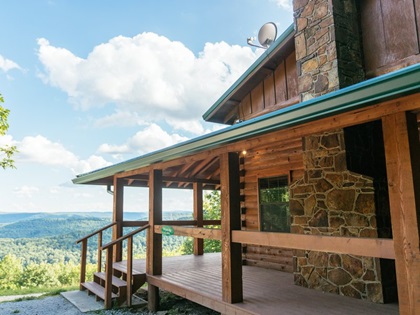 It offers canoe, kayak, and raft trips on the Buffalo National River; hiking, mountain biking, a zip line, and the chance to see Elk. There are a variety of lodging options including RV camping, and cabins that can sleep anywhere from 2 to 6 people – some even have hot tubs! There also is a lodge that is used for large events like weddings.

The only drawback – the airstrip is 1,200-feet long with an uphill grade. It is a one way in, one way out type-of field, so pilots “have to be really comfortable with short field procedures,” Jordyn said. 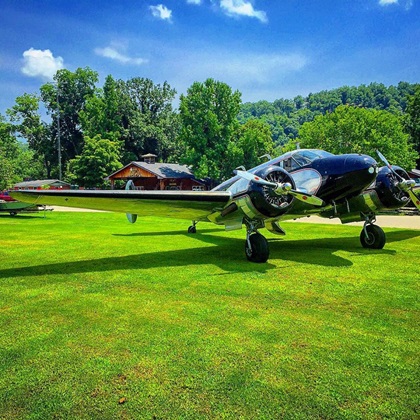 Fortunately some of the club members have long standing relationships with other fly-out destinations with longer runways, such as Gaston’s White River Resort (3MO) and its 3,200-foot turf runway that can accommodate twin-engine aircraft and Byrd’s Adventure Center (51AR) with it’s 2,500-foot strip. “You can put a lot of things in and out of those strips,” Jordyn said. “They both have great facilities. Both have really delicious restaurants, and both have all sorts of lodging.”

OZ1’s June fly out is a fly-fishing trip on the White River at Gaston’s and in October the club will go to Byrd’s Adventure Center. Last year, the most popular fly out was to Richland Creek, a new grass airstrip in the Ozarks, and the club plans to make it an annual camping event. 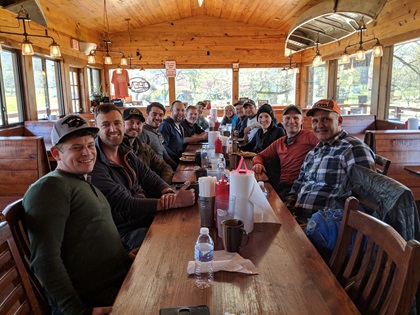 Other trips include kayaking on the Bayou DeView water trail and “glamping,” or high-end camping. “We have some friends who worked on the design team of the trail and they’re going to come up with a really cool glamping experience,” Jordyn said. “They’ll probably bring in some old Airstream campers and set up some nice platform tents and cater really fantastic food and drink.” And don’t forget the music; they’ve got connections to the Blues scene in South Arkansas, too.

For Sun ‘n Fun, it’s not a traditional fly out, but the club is still organizing a trip. They are encouraging members to fly commercially because fares from Northwest Arkansas Regional Airport in Fayetteville to Orlando Sanford International are as low as $180 roundtrip, and the club will book the hotel and itinerary. The trip includes a day and a half at SNF, including VIP seating for the Sunday air show courtesy of Game Composites, manufacturers of the GB1 GameBird aerobatic plane – and no surprise, another club connection. Both OZ1 and Game are based at Bentonville Municipal Airport. The trip also includes a day at NASA’s Kennedy Space Flight Center and time on the beach. OZ1 handles all of the logistics.

It takes a lot to put together a list of fly outs that are as diverse and all encompassing as what OZ1 offers each month. But one of the club’s goals is to take advantage of the opportunities around them. “When [our members] say, ‘Where can I go for fun?’ There is this whole playground basically at our doorstep,” Jordyn said.

Hopefully these fly outs provide your club some ideas about what your members can do and where you can go. Fly outs could be as simple as taking a day trip to Nantucket, Massachusetts; Mackinac Island, Michigan, or Tangiers Island, Virginia in the Chesapeake Bay. Or perhaps fly to an aviation museum. There are many small, but interesting aviation museums all around the country that are worth a flight to visit.

Think of interesting destinations that you would want to visit and see where the closest general aviation airport is – it’s probably not far. Like Gettysburg, Pennsylvania (W05) which is a few minutes from the Civil War Battlefield and President Eisenhower’s farm, or the airport in Sedona, Arizona (SEZ) on top of the mesa.

The possibilities are endless. So go out and exercise your freedom to fly and see some of the wonders our great country – and neighboring countries, like Canada, Mexico, and the Bahamas – have to offer.