One of the joys of aviating is that you can literally fly from sea to shining sea and experience the beauty and diversity of our country—whether it’s the Atlantic coast from Maine to Florida, the rolling hills of the Smoky Mountains, the plains of the Midwest, the Rocky Mountains or the desert Southwest. 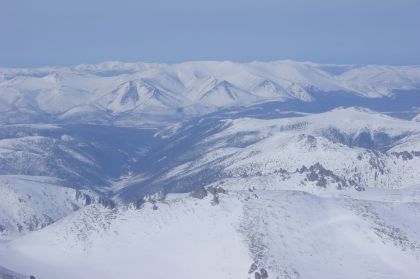 Each region offers a variety of landscapes and flying opportunities, as well as unique challenges, such as weather or local terrain. If your members are embarking on a cross country trip to an unfamiliar area of the country, it would make sense for them to reach out to a club in that area using AOPA’s Club Finder, to learn about local knowledge and customs

One such place where local flying knowledge makes a big difference is Alaska. Based in Fairbanks, members of the Arctic Flying Club face unique challenges that most pilots in the lower 48 don’t usually have to consider. 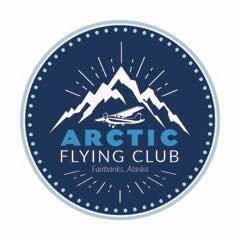 The club was founded in 1969 and operates a Cessna 172 with the 180-hp conversion. It also has larger tires and bigger nose wheel strut to improve operations on unimproved airfields which are common in Alaska. The club is limited to 25 members and currently has 21.

Among the main differences up north are “weather, general distance between airports and the fairly limited number of airports that sell avgas,” Maintenance Officer Dave Stotter said. Weather in Alaska is the most obvious difference.

First, the amount of daylight has a much greater swing than in the continental United States. “Basically from the end of May, [into] June, July, and the first of August it’s pretty much light. There isn’t an official sunset so there’s twilight but it doesn’t get dark,” Dave said. “Then we start losing [daylight] pretty fast, like seven to eight minutes a day until the shortest day in December and then we start getting it back.” In the winter, the sun rises around 10:30 am and sets by 3 pm, but there is a fairly long dawn and twilight, he noted.

While most people assume Alaska is cold, temperatures in the summer can get as hot as 90 degrees, although that’s not typical. Average temperatures in Fairbanks in June and July range from the low 50s to a high of about 73 degrees Fahrenheit. In the winter the mercury can dip as low as 50 degrees below, although winter temperatures usually range between a low of –20 Fahrenheit to a high of 0, Dave said.

The club’s plane is parked outside on the east ramp at Fairbanks International Airport (KFAI) and usually, in late September or early October, the club puts the winter insulated covers on the wings, tail, windshield and cowling.  Once those covers go on, members tend to fly less often because of the effort it takes to remove them and put them back on! 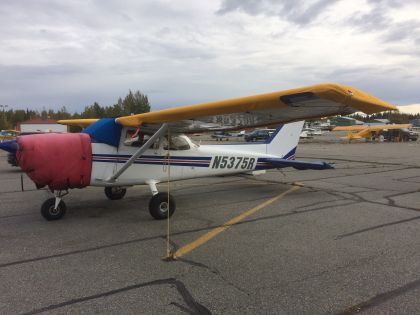 If a member doesn’t mind the extra preflight and post-flight work, they need to be mindful of the extreme cold. It’s no surprise the plane has a Tanis heater that is kept plugged in whenever the plane is parked. The club also has a small electric heater they keep on the floor on the pilot’s side to keep the cockpit warm.

“It blows up under the dash to keep the instruments warm and ready to go. And then it keeps the cockpit warmer for the pilot too,” Dave said. “The main thing is to keep the gyros and electronics warmed up, so they turn on and work instead of being all frozen.” 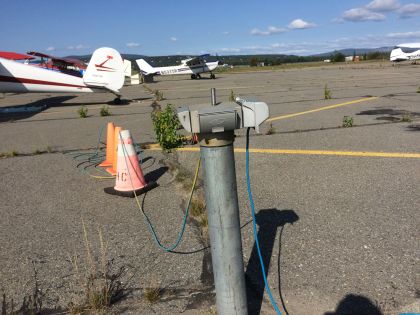 To provide power, there’s an electrical post in the middle of four parking spaces with four plugs around the post so each aircraft can use it. There’s no charge for the electricity so the Arctic Flying Club leaves the heaters plugged in and turned on 24/7. “With 20-some members you don’t know when somebody’s going to go or not go. It’s just easier to leave it plugged in and that way it’s always ready,” Dave said. “You want to make sure the plane is plugged in and things are warmed up. It’s like any engine, it doesn’t like to be cranked over if it’s 20 degrees below.”

When flying in Alaska, or any region of the country that is quite rural, “you’ve got to or should be thinking ahead, wherever you’re going,” Dave said. That’s particularly true in Alaska for many reasons. First, airports can be few and far between. But even more importantly, many airports don’t have avgas, which makes flight planning a bit more critical. “You either have to be going somewhere on your route where they’ve got avgas or you’ve got to carry some with you,” Dave said.

The lack of airports with fuel is one reason the Arctic Flying Club’s 172 is outfitted with long-range tanks, which increase fuel capacity from the standard 42 gallons to 52 gallons. Having the 180-hp engine instead of the standard 150-hp engine also helps as it increases the useful load [See this month’s aircraft spotlight]. 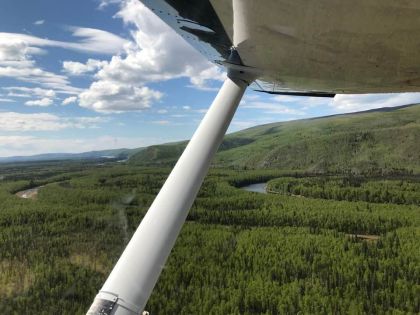 Another factor in flight planning is picking a route with safe alternate landing sites – whether its an airport or a safe place for an off-airport landing. It’s not like the Midwest with nothing but farmland with roads cutting across the fields as far as the eye can see.

“If you had engine trouble, up here your choices are very limited. You’re probably going to put it down in a spruce forest or in a bog,” Dave said. “If you’re lucky, maybe you’ll find a big river bar. Your emergency landing sites are much more limited.” 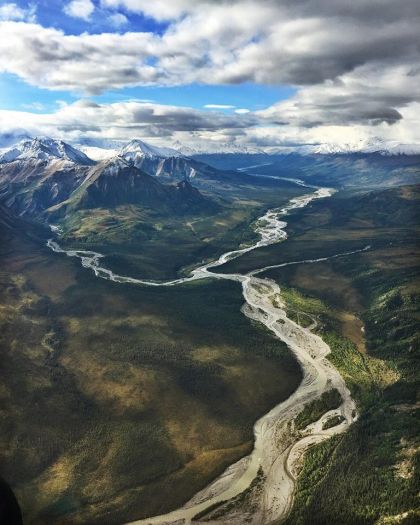 In the lower 48 states it’s not uncommon to find a pilot, particularly in a vintage aircraft, flying low and slow IFR – I Follow Roads. “A lot of the guys here do the same thing,” Dave said. “But it’s more I Follow Rivers. As far as landing, you might have a big bar to land on, but you might not. There are a very limited number of roads, so if you’re going to go anywhere, you’re almost certainly away from the roads.”

One the best parts of flying the Alaskan wilderness is the natural beauty – green forests and white snow covered mountains. Fairbanks sits in a valley at 440 feet. To get to Anchorage, about 225 miles south of Fairbanks, you have to fly through the Alaska Range with Mt. McKinley at 20,000 feet. While you’re not going to fly over McKinley, there are several passes that you do have to fly through, such as Broad Pass at about 4,000 feet. To the north, he said flying at 8,000 feet will get you over the top of about 80 percent of the Brooks Range. Passes are noted on the sectional chart. 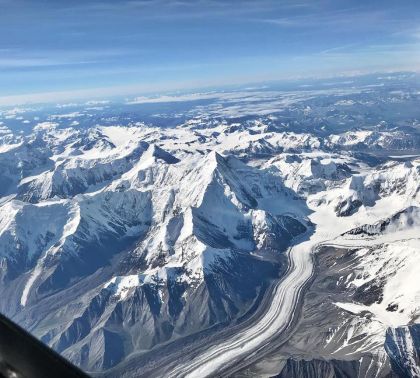 “Some are nice, big wide passes like Anaktuvuk going through the Brooks Range,” Dave said. “You’ve got plenty of room to turn around if you have to. Same thing with the Broad Pass going south toward Anchorage or Isabel Pass going the other way toward Valdez.”

But flying though mountain passes can be tricky and pilots can quickly get into trouble. “Some things are labeled as passes, but they’re barely a pass at all. Atigun Pass is famous, that’s where the haul road goes through going north to Prudhoe Bay,” Dave said. “It isn’t much of a pass as far as an airplane is concerned. It seems like almost every year someone gets themselves in trouble there, and the ground starts coming up faster than they can climb, and they end up slamming into the side of the hill. So you have to really pay attention. Just because it says it’s a pass, you have to make sure you know what you’re getting into.”

Assuming you’ve made it through the passes to your destination and you’ve planned properly with plenty of fuel for the return trip, now it’s time to land. It’s fair to assume that most pilots in the continental United States land primarily at airports with paved runways and so don’t have much experience landing on unimproved strips.

In Alaska, unimproved strips are fairly common. “All of the villages are gravel strips and a lot of the others, the majority of places you’re going to go, are gravel or dirt,” Dave said. That’s why the club has the larger tires on the 172 and the bigger engine.

Flying into and out of gravel strips requires pilots to be proficient in both soft field and short field operations. The main concern is minimizing rock chips on the propeller and digs on the tail. “If you have good soft field technique, it’s not very common,” Dave said. “You keep the nose up as much as you can, land on the mains and lower down gently.”

More importantly, pilots should not do any stationary run ups on the gravel. “You can do it when you’re taxiing, but even then, nice slow acceleration of power,” Dave said. “Don’t just slam it up.” Members are encouraged not to fly into a field so short that they would need to hold the brakes and advance the power to full throttle to get out because that increase the chances of chips and dings as rocks will be flying all over the place, he added. 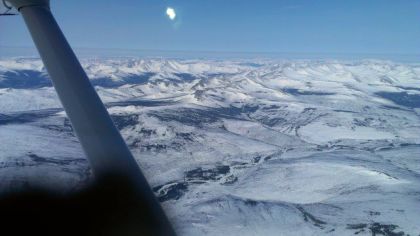 Flying in different regions of the country offers the opportunity to see and experience many natural wonders and develop your piloting skills. Take the time before heading out on that cross country to get familiar with local weather patterns, terrain, and regional differences. Consider using AOPA’s Club Finder to reach out to a club in the area you’ll be flying in, so you get a sense of what flying tips and techniques are valuable when you fly in that area. Flying in Alaska may be an extreme example of regional differences, but it clearly highlights how there are a variety of unique and diverse conditions that pilots must understand to fly safely, no matter what region of the country you are flying in.