Flying Clubs Club Connector Newsletter Club Spotlight: Taking a Flight on the Lighter Side with the Ultralight and Sport Pilots of America

Club Spotlight: Taking a Flight on the Lighter Side with the Ultralight and Sport Pilots of America 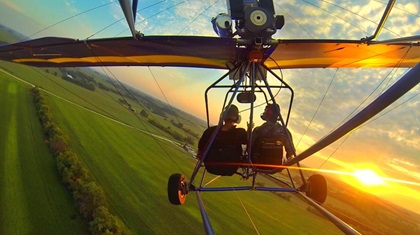 That’s what it’s like to fly an ultralight, according to Larry Preston of the Ultralight and Sport Pilots of America (USA). The club is based in southern California at Perris Valley Airport, about 20 miles south of Riverside, and has been around about as long as the FAA has recognized ultralights.

What the club does is serve as an entry point and resource to those who want to get into flying through ultralights and LSAs. Club members provide guidance and mentorship to newer members, help each other with maintenance, and enjoy the camaraderie of recreational flying through skills competitions and fly outs.

What is an Ultralight?

In 1982 the FAA established Part 103 of the Federal Aviation Regulations setting guidelines for ultralights. They are defined as a single-seat vehicle with a maximum empty weight of less than 254 lbs. The maximum airspeed cannot exceed 55 knots and the stall speed cannot exceed 24 knots. The maximum fuel capacity is 5 gallons. If an aircraft has two-seats, it is considered a light sport aircraft (see this month's Question of the Month for more details). 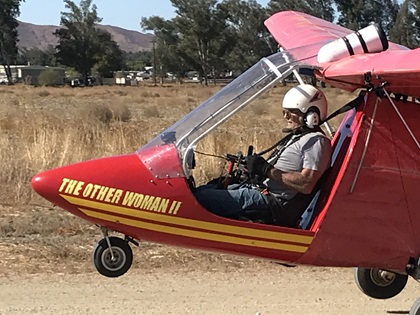 Larry pointed out the FAA doesn’t refer to ultralights as aircraft, but merely refers to them as “vehicles.” Flying an ultralight is perfect for someone who just wants to be in the air. It’s not about how fast or how far or how high, it’s just about experiencing the joy of flight. It is arguably the freest form of flying possible—from both an aviating perspective and a regulatory one.

According to Part 103, the vehicle does not need an airworthiness certificate or registration.  Also, “operators of ultralight vehicles are not required to meet any aeronautical knowledge, age, or experience requirements to operate those vehicles or to have airman or medical certificates.”

The Ultralight and Sport Pilots of America Club

Ultralights were developed in the mid-1970s from hang gliders, with the first versions being weight-shift aircraft, later known as trikes. Fixed-wing versions evolved to having a stick, which often controlled the rudder—the wings had enough dihedral that when you used the rudder, the wings would dip in the direction you wanted to turn, Larry said. Later ultralights were designed with conventional controls. 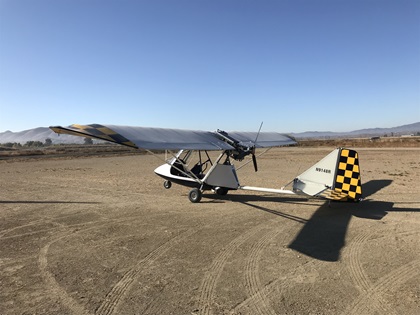 One of the things that makes the club unique is that it operates its own private airpark with its own runway at Perris Valley Airport (L65). The club leases property from the airport and has a 1,000-foot dirt runway and a row of enclosed carports for ultralight storage.

The main airport, which has extensive skydiving operations, has a 5,100-foot runway, but only 3,200 feet is paved. Each hangar has water and electricity provided by the airport, and when the club needs to have the runway and taxiway smoothed out, the airport management will come out and grade the runway, taxiway and roadway. In addition, if an ultralight pilot feels they need to use the main runway instead of the ultralight runway, they are allowed to do so. 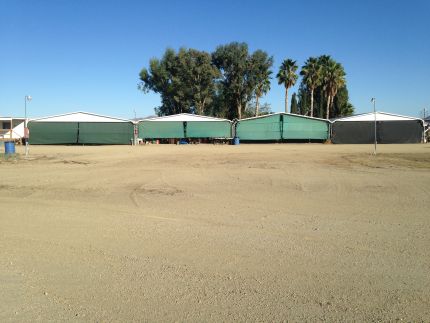 “The working relationship between the airpark owners and our association is very, very good and we work really well together to either resolve conflicts or in some cases come up with really good ideas,” Larry said.

The club requires its members to have radios so they can keep in communication with the jump planes, which are constantly taking off and landing, “like a conveyer belt,” Larry said. “It’s all about safety. They’ll tell us where they’re at and we’ll tell them where we’re at and we’re all looking for each other,” Larry said. “So far, since 1983, we’ve never had any incidents between ultralights and general aviation planes.”

The ultralight field also has its own Unicom separate from that of the airport and GA aircraft are not allowed to use the ultralight runway since it is so short.

The club is organized in a similar way to a general aviation flying club as a non-profit corporation with bylaws, officers, and monthly meetings. Dues are $15 a month and a tie-down/hangar at the ultralight field costs $60 a month. In order to base your ultralight or LSA at the ultralight field, you must belong to the club. There is a club house that all club members have access to. There is a $45 initiation fee, which covers the new member’s dues for a 90-day probationary period.

Larry said the purpose of the probationary period is to see how the new member fits-in. “When a new member comes on board, we try to make them feel a part of the family,” Larry said. “Everybody is there to support each other.” The club will have somebody mentor the new member and show them where they can fly and areas they should avoid. 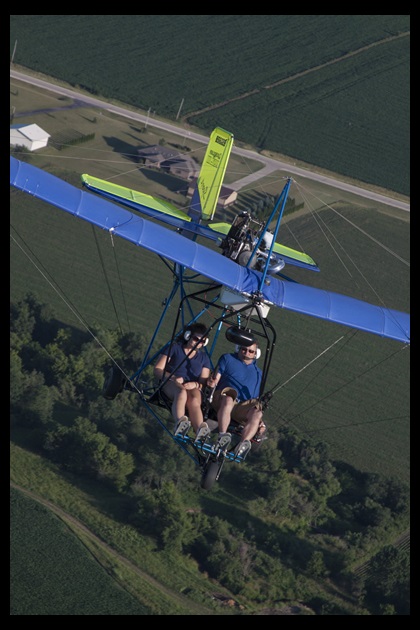 Most new members join and they don’t have a plane so the club will introduce them to the world of ultralights and LSAs. A member will take a new person up in a two-seat MX II, which is now considered and E-LSA, “so they get the experience of what it’s like to fly an ultralight. And then if they decide, yes this is what I want to do, then we have a list of instructors that we send them off to,” Larry said.

Ultralights by regulation are single occupancy and there are no official training requirements. However, the club recommends that new pilots get a sport pilot certificate. Quicksilver, one of the leading ultralight manufacturers, modified the popular and proven two-seat MX II design and certified it as the Sport 2SE [see this month’s Aircraft Spotlight]. This provides aspiring ultralight pilots access to two-seater aircraft in which to train. [See this month’s Question of the Month]. Larry also points out that if a general aviation pilot is getting into ultralight flying, the club recommends they get transition training since it is a different type of flying. [See this month's Safety Article].

Another benefit of membership of The Ultralight and Sports Pilots of America is the experience existing members have to offer new members. If a new member wants to buy an ultralight, other members will go with them to look at the plane and help them evaluate the condition of the aircraft.

One of the ways the club promotes safety and camaraderie is through monthly competitions and regular fly outs. Before the monthly meeting, any pilot may compete in three skills categories – a bomb drop, a torpedo run, and a spot landing competition. Generally, there are between two and eight members who compete each month. At the end of the year, the club awards a Top Gun plaque to the pilot with the most points.

“Part of the reason for the competition is to know your plane and to know how to land your plane in a tight spot, hence the spot landing,” Larry said. “There is an old saying in ultralight flying that it’s not a matter of if, it’s a matter of when, your engine will quit while you’re flying.”

The way the bomb drop is designed, the pilot takes off and flies a standard pattern—crosswind, downwind, base and final. On the first two runs, the pilot stays at 100 feet or higher, flying right down the runway. There is a target off to the side of the runway on to which the pilot drops a sock full of kitty litter about the size of a softball, attempting to get as close to the center of the target as possible. 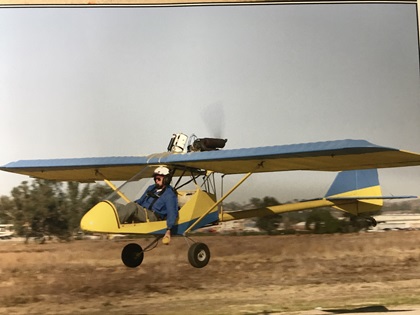 The third and fourth runs are the torpedo runs. “We take two-liter soda bottles and we weigh them down with water. We have 10 of them like bowling pins,” Larry said. “The pilot drops his plane, gets right down on the deck, flies down the runway and drops another bomb and tries to knock the pins down.” If the wheels touch the ground or part of the plane knocks one of the pins down, they are disqualified on that run and they don’t get any points.

The final part of the competition is a spot landing contest. There is a large red tape line across the runway and pilots must land as close to the line as possible.

“The object is your main wheels have to stay on the ground, you can’t bounce,” Larry said. “You land as close as you can to the red line. If you land before, it’s like a carrier landing. If you land before [it’s like] you hit the fantail [of the ship] and you don’t get any points.”

While one of the main reasons for the competition is to have fun, it’s really about safety. The pilot is “learning the patterns, the turns, learning altitude, maintaining control of his plane,” Larry said. “There’s a big difference being at 500 feet and 1,000 feet. How is your plane going to land, especially if you have an engine out?”

Ultralights provide an opportunity for those who want to experience the joy of flying at its most basic level. They are an inexpensive way into aviation and ultralight clubs around the country, like the Ultralight and Sport Pilot Association at Perris Valley, California, provide a good resource. They are social organizations where members share their knowledge and experience, encourage safe flying and have fun together.