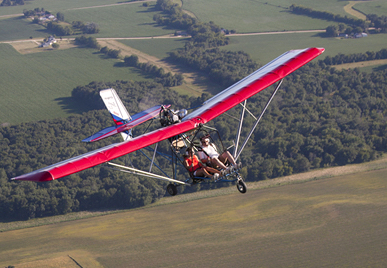 The world of ultralight flying is a bit different than flying traditional general aviation aircraft. Which means this month’s aircraft spotlight on the Quicksilver Sport 2SE is going to be a little bit different as well. To help explain ultralights and their operation, we talked with Bob Comperini, a former president of the United States Ultralight Association (USUA), who also is a Designated Pilot Examiner (DPE) for both Sport Pilot and Airplane certificates. In addition, he holds a Light Sport Maintenance Repairman rating and an Independent Rotax Maintenance Technician certificate, which means he can service and maintain the Rotax series 912 engines.

According to Federal Aviation Regulations Part 103, which govern the operation of ultralights in the United States, an ultralight is defined as a single occupancy “vehicle” without an airworthiness certificate, with an empty weight of less than 254 lbs. and a maximum speed of less than 55 knots and with a fuel tank that must not exceed 5 gallons.

By definition, the Quicksilver Sport 2SE is not an ultralight because it has two seats. It is essentially an upgraded, certified version of the Quicksilver MX II, a proven and popular design that has been flying for four decades. The Sport 2SE was certified in 2014. It is factory built and comes complete with an airworthiness certificate. It is classified as a Special Light Sport Aircraft (S-LSA) but it is essentially a big ultralight with two-seats that can legally be used for flight training. It also is available in kit form, as an E-LSA. 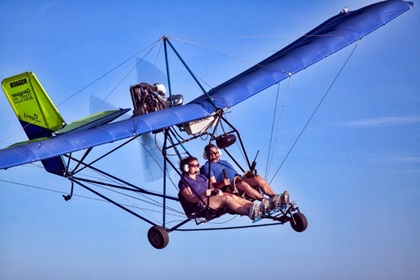 Most ultralights are powered by two-stroke Rotax engines, such as the 45-hp 477, 53-hp 503 and the 65-hp Rotax 582, which is the most common. They all run on auto fuel and burn about three to four gallons an hour.

“For $30 I can fly for two and half hours at 60 mph,” said Larry Preston of the Perris Valley, California-based Ultralight and Sport Pilots of America club [see this month’s Club Spotlight]. “And I’m using premium gas. I could go cheaper and use regular unleaded.”

Maintenance
Maintenance costs for an ultralight are also almost non-existent. Because they are unregulated, there are no requirements for annual inspections. Larry said owners generally follow the manufacturer’s recommend maintenance and members of his club often help each other at no cost.

“The engine is the biggest maintenance issue,” Bob said. “What I tell people about the airframe is, if you don’t bend it, you don’t have to replace it. If you’re a pilot who has lousy, hard landings, you’re going to have more maintenance.”

Bob noted the there are some routine maintenance items from time to time, such as replacing a $25 tire now and then or replacing spark plugs. With two-cylinder engines, there are a total of 4 spark plugs and Bob said they are cheap – about $2 each. Fuel filters need to be replaced, but you can get them at an auto supply store he said. Once a year or so he may replace $20 worth of the plastic fuel line, which can get hard, especially with ethanol in the gas. 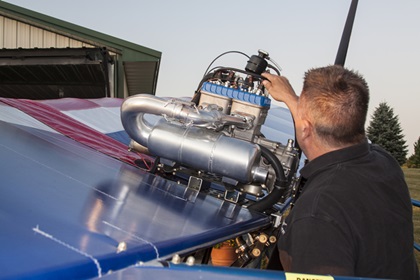 Rotax suggests an engine rebuild every 300 hours, and they can cost a little bit of money. Depending on what is needed, Bob estimates a 582 rebuild would cost about $2,500. He said the biggest issue is the crankshaft, because when it goes it needs to be replaced.

The wings are untreated Dacron. If the aircraft is kept outside in the southern California desert, it might last you two years, Bob said. Keeping it in a hangar or covered and it could last decades. “My last Quicksilver, I had it 18 years and the original sails were just fine. So they can last a good long time,” he noted. To replace the fabric on both wings and tail surfaces costs about $1,800 to $2,000, Bob said.

Insuring an ultralight is cheap – that’s because hull insurance isn’t available. You can get liability insurance, but only from a few companies. Bob said liability insurance runs about $400 a year. The US Ultralight Association recommends First Flight Insurance Group and EAA has insurance plans for experimental aircraft, gyrocopters, powered parachutes and trikes (weight-shift control) aircraft.

When it comes to ultralight flying, training is the rub. Part 103 restricts ultralights to one seat. The older MX IIs are now considered experimental aircraft, which means they can’t be used for compensation or hire.

That’s where the Quicksilver Sport 2SE comes in to play. As a certified S-LSA it is legal to provide training in one. The best way to find an instructor who can train you in a Sport 2SE is to reach out to your local ultralight club. It is a close-knit community and most clubs should be able to refer you to instructors and available aircraft.

When asked if the MX II, the predecessor of the Sport 2SE, was at one time the Cessna 150 of the ultralight world, Bob said, “in that everybody knows of it and at one time it was probably the most popular airplane, I think so.” It’s a well-proven design that hasn’t really changed since the 1970s. Bob said it has docile handling characteristics and noted, “It’s a good, safe, well-designed aircraft. It’s a STOL airplane with a lot of drag so it doesn’t need much runway. “You can takeoff in 150 feet and land in even less,” Bob said. “You can’t do that with any other airplane, or not too many.”

On the negative side, it doesn’t handle the wind all that well. You’re not flying in anything above 15 or 20 mph winds, Bob said. It’s too light and you get bounced around. “It’s a fair weather airplane, that’s for sure.” 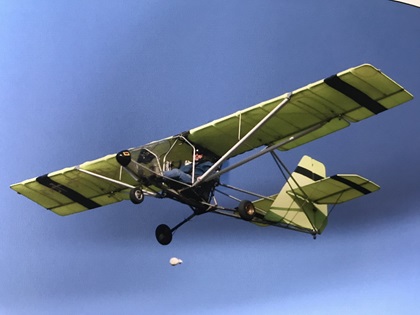 An ultralight probably would not be your first choice in cross country aircraft, but it can be done. “It ain’t fast so you’re not going to do a cross country unless you’ve got extra time,” Bob said.

What comes to mind is the old adage, “Time to spare, go by air.” While that is usually reserved for difficulties of flying commercial aviation these days, it is certainly appropriate for flying any distance in an ultralight.

First, an ultralight is required to have a fuel tank of no more than five gallons. The Sport 2SE S-LSA and MXII E-LSA have larger fuel tanks, anywhere from 6 to 12 gallons, which provides a little more endurance.

But even burning, three to four gallons an hour, you’re not getting too far before needing to land for fuel. And of course, ultralights are limited to a max speed of about 60 mph and cruise slower than that, so you’re really just hopping along.

“I mean, my God, 45 mph minus a headwind that you’re going to have. How far are you going to go?” Bob asked. “That being said, there is a guy here in Southern California who is quite proud of the fact that he flew his Quicksilver from here to New York City. Anything is possible if you have enough time on your hands,” said Bob, adding, “The trip is part of the fun.”

Honestly, you probably don’t want to be in the air too long. Most ultralights are completely open to the elements and that takes a physical toll on the pilot. Bob said the wind makes you thirsty, and it’s noisy so a good headset is a must.

“I always tell people, if I want to go someplace, if I want to go from Perris, CA to Lake Havasu, AZ the fastest way to get there is either by bus or car, because if I’m going to fly my plane there it’s going to take a while,” Larry said. “But here again, it’s not the destination it’s the journey. And the journey is the greatest.” 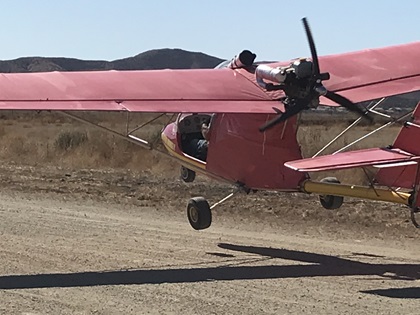 There’s nothing more exhilarating than flying low and slow, with the wind in your face, completely out in the open with nothing but earth and sky all around.

“These airplanes are just begging to be flown low. We’re more happy at a 1,000 feet over the ground and maybe lower if you’re not over a city,” Bob said. “The wind in your face and the fact that you’re not confined in the cockpit is kind of cool. You look down between your legs and there’s earth.”

Larry of the Ultralight and Sport Pilot Association added, “We fly slow. We fly low. And we get the sights and the smells. Not only do you get this fantastic view of what’s around you, there is no restriction in the view. The general aviation guys see a big broad view of scenery, but we actually get to see the leaves on the trees.”

Besides the experience of flying in the elements, another aspect that appeals to ultralight pilots is the simplicity. There are minimal gauges, there are no flaps, and it truly is stick and rudder flying. One of the things Larry enjoys is “you have to fly the plane. You can’t just trim it up and let go. It’s all hands on, you’ve got to fly the plane.”

For someone who wants to experience the joy of flight on the most basic level, ultralights offer an attractive option. “They’re cheap ways of getting in the air,” Bob said. “They’re jet skis compared to a boat.”

The certified S-LSA Quicksilver Sport 2SE or its E-LSA older sibling the MX II are good, affordable options. As two-seat aircraft, they are technically not ultralights, but they share the same proven, safe design that has been flying for decades. Whether you are looking for a new or used model, or choose to build one on your own, they provide a low cost, fun way to get in the air. There are clubs around the country that can provide experience and camaraderie to those just getting started or those who are looking to be part of the aviation community.