Flying Clubs Club Connector Newsletter Question of the Month: How Can I Get Involved in Hot Air Ballooning?

Question of the Month: How Can I Get Involved in Hot Air Ballooning? 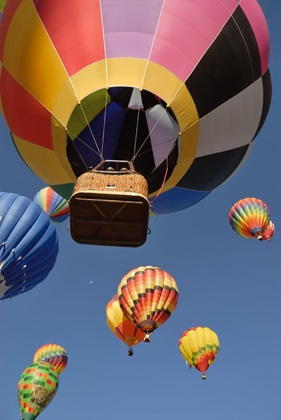 If you’ve ever been around hot air balloons, you probably know the community is like a big family. More than other forms of flight, it takes a team of people to launch, fly, and recover a balloon, making it a social activity by necessity. The bonds and camaraderie are strong not only within an individual balloon crew, but also among the various crews that fly in a given area or region. So how can you get involved in hot air ballooning?

One way to get involved is to join a balloon club. A good starting point is the Balloon Federation of America (BFA), a non-profit association founded in 1961 to advance the sport and science of lighter-than-air aviation. On its website the BFA states, “The best way to get involved locally is to join a club. Clubs connect pilots and crew, and often organize fun flights and outings.” There is a link that takes you to a list of clubs across the United States and Canada. 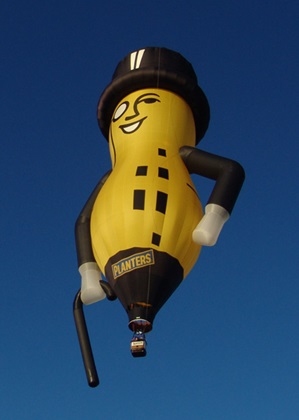 If you’ve never flown in a hot air balloon, there are basic points that may be helpful to understand. Most balloon crews are a minimum of four people – a pilot, crew chief and two crewmembers. If the balloon is a special shape it may require extra personnel to set up. Some of my favorites include Mr. Peanut, the Space Shuttle, Darth Vader, and the American Flag.

A hot air balloon consists of a wicker basket or gondola for the passengers that hangs below the balloon, which is technically called a bag or envelope and is generally made out of nylon or polyester. Baskets range in size from just a few people to as large as 20 or more. Most balloons can hold four people.

The opening at the bottom of the envelope is the mouth or throat. The top of the balloon is known as the crown and is attached to the envelope by Velcro and can be opened or removed by pulling on a rope called the crown line. Inside the basket are the burners and propane tanks and there may be some basic instrumentation like an altimeter. 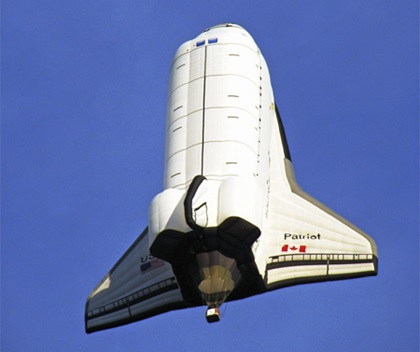 Balloons are aircraft that must have an airworthiness certificate, annual inspection, and be registered with the FAA, so they do have N-numbers. Pilots must be licensed, and to carry passengers a commercial license is required, just like fixed-wing pilots.

Balloons typically fly around sunrise and a few hours before sunset when winds are calm. Flights usually last 45 minutes to an hour, generally cover about about five to 10 miles from launch to landing, and don’t go more than 1,000 to 2,000 feet above the ground since most people like being able to see the landscape, homes, people, and animals below. That said, balloons can go thousands of feet in the air. 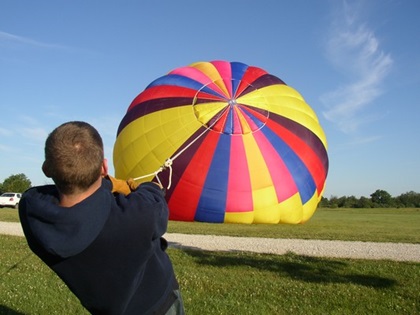 To prepare for a flight takes a team effort. The crew will lay the basket on its side and then get the large, heavy bag that stores the envelope. The crew holding either side of the bag walk away from the basket laying out the envelope flat on the ground, then they attach the lines to the basket. The crown is secured to the top of the envelope and the pilot will do a preflight inspection of the lines, as well as make sure the burners and propane tanks and secured and working properly.

A large fan is placed at the mouth of the envelope, which is held open by two crew members while the balloon is inflating. The crew chief pulls the crown line out to make sure the balloon is fully extended and to provide stability. Once the envelope is inflated, the pilot will begin to use the burners to heat the air inside the envelope. As the temperature climbs to between 180 and 225 degrees, the balloon will rise on its own and the crew helps to steady the basket in the upright position. They often help passengers into the basket and then hold it down before takeoff. The crew chief will walk the crown line in to the basket and tie it off on one of the posts. The pilot will conduct a safety briefing before flying. 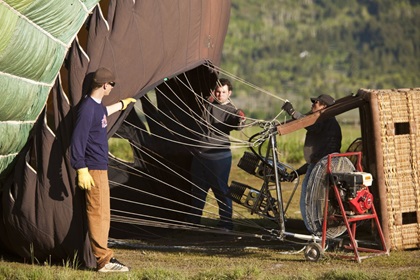 Once the balloon launches, the fun begins. For those flying, slowly lifting into the sky and floating above the tree tops is truly majestic. The sound of the burners needed to heat the air in the balloon for the ascent quickly fades into silence, leaving those in the balloon to view the world from the perspective of the birds without any noise or distraction – other than the occasional dog barking at the balloon as it slowly passes over the tree tops.

The Chase and Landing

For the crew on the ground, it’s time for the chase to begin. Without the ability to steer other than by changing altitudes to catch differing wind currents, the balloon is at the whim of Mother Nature. The chase car needs to keep the balloon in sight and figure out what roads will get them to wherever the balloon eventually lands. With Google Maps or a car’s GPS, the mystery and challenge are not the same as it was before technology provided a window into the world. 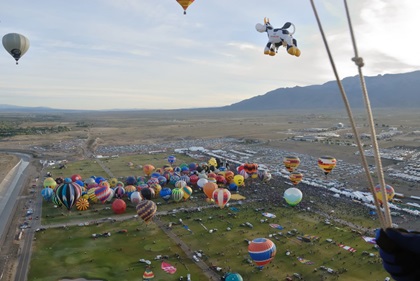 If the crew is on the ground before the pilot begins to descend for landing, ropes may be dropped so the crew can help guide the balloon to touchdown exactly where they want to land. Once the balloon is on the ground, it will deflate and gently fall to the ground with the crew laying it out, bunching it up and then packing it back into the bag in a process that is reverse of set up.

One of the best traditions of ballooning is the celebration --- typically a champagne toast (remember the first hot air balloon flight did take place in France) and cheese and crackers or light hors d’oeuvres.

If ballooning sounds like something you want to do, balloon clubs provide a nice entry point to meet pilots, crew, and other enthusiasts. Just like fixed-wing flying clubs, balloon clubs serve as a wonderful resource for education, training, and mentorship whether you’re interested in becoming a pilot or crew member. Clubs often hold safety seminars, competitions, and social events. Ballooning is truly a tight-knit community that is like one big family.

If there aren’t any balloon clubs near you, don’t worry. If you see a balloon getting ready to launch or land, just walk up to the crew, introduce yourself and ask if there is anything you can do to help. More often than not, they’ll say yes. And just that quickly you have become part of the ballooning family and your training has begun!