Flying Clubs Club Connector Newsletter Club Spotlight: Picking up the Pieces – What to do After an Accident or Incident

Club Spotlight: Picking Up the Pieces: What to Do After an Accident or Incident

It was about 11 in the morning on a Thursday in March 2018 when Carl Kennedy got a call he never wanted to get. The Treasurer of the Pompano Beach Flying Club picked up the phone and another member told him the club’s Cherokee Six had just crashed at the airport. The voice on the other end of the line said he was waiting to depart and saw it all. “I don’t know how anyone could have survived,” the member said.

Carl immediately got on the phone with the club’s chief pilot and the club’s A&P/IA and drove to Pompano Beach Airpark (KPMP) about six to eight miles from his office. The three met at the field and were able to go straight to the crash scene.

The wreckage came to rest next to a fence near the Goodyear Blimp hangar. The NTSB preliminary report said, “the outboard section of both wings were sheared off, the landing gear was separated, and the engine was partially separated from the firewall.” Looking at photos in the press, it appears the entire right wing was ripped off. 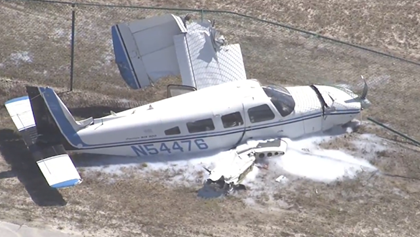 “You could tell it was a total loss,” Carl said. Miraculously, the pilot and his passenger walked away. The only injury was a minor cut requiring nothing more than a band-aide.

Now what do you do? The press will probably call. The FAA and NTSB will be asking questions. What do you do with the aircraft? What’s the insurance company’s role in all of this? How will the loss of an aircraft affect the club? There are a lot of questions that need to be answered following an incident or accident.

Before looking at how the Pompano Beach Flying Club (PBFC) responded to the crash, let’s get an understanding of the club. It was founded in 1970 with the mission to provide members with well-maintained, well-equipped airplanes at the lowest possible cost. However, the club also promotes membership as “a chance to meet fellow pilots in a relaxed way, to make new friends and to profit from the flying knowledge that they are happy to share with you.”

Until about two years ago, the club required members to have 300 hours or an IFR rating to join. However, they decided to change and accept members who are student pilots to diversify its membership. Today the club has about 70 members – the most it’s ever had – and about 20 percent are low time pilots.

PBFC operates an all-Cherokee fleet with five different aircraft available. Any member may fly the PA28-140 and the PA28-151 Warrior, which are used primarily as trainers. Members with 300 hours or an IFR rating also may fly either of the two PA28-181 Archer II’s or the club’s PA32-300 Cherokee Six with the proper check out.

The club allows members to fly to the Bahamas or the Keys, and many often do. PBFC has life vests and rafts that members may use at no charge when making over water flights. Although members may schedule a plane for two-weeks at a time with no daily minimums, the aircraft are rarely used that way.  That isn’t to say they aren’t flown much. In May 2019, members flew nearly 200 hours. That total would have been more but one aircraft was in the shop for its annual, so it only logged 16 hours. All the other aircraft were flown between 30 and 64 hours each. 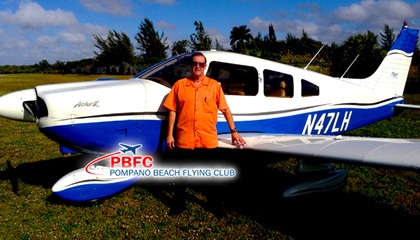 The club owns its aircraft and carries both liability and hull insurance, which was helpful following the crash.

Following a crash there are a lot of things that take place and a lot of agencies that may be involved – from the emergency responders, NTSB and FAA, to environmental agencies and the media.

First is the emergency response. Fortunately for the pilot and passenger of PBFC’s Cherokee Six, they were able to walk away from the crash uninjured, despite the aircraft being a total loss.

However, the fire department did foam down the airplane to ensure there would be no fire. The damage to the wings meant fuel was spilled, requiring an environmental cleanup.

The NTSB and FAA prioritize response based on severity of a crash. Because there was no loss of life or serious injuries, and only minor damage on the ground, the NTSB did not go to the scene. The FAA came out the following day. 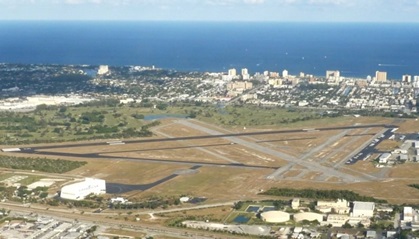 “We weren’t a priority item because there were no fatalities. There was just a little bit of property damage. So we weren’t on the fast track,” Carl said. “All they were interested in doing was securing that aircraft and they took it up north to some hangar somewhere, where it would just sit until they get to it. That’s just the process with them.”

However, the insurance representative showed up really quickly. “The gentleman from the insurance company, he’s a seasoned veteran with this type of thing and he handled everything,” Carl said. “It was my first experience and it couldn’t have gone any more smoothly. I tip my hat to the insurance carrier for that.”

The club left everything in the airplane because they didn’t want to taint the investigation. The insurance representative at some point went up to look at the airplane and the NTSB returned the equipment such as the life vests and personal items.

The maintenance officer gathered all the records and maintenance logs and turned them over to the FAA. The pilots made a statement, which is reflected in the preliminary NTSB report. Carl and the maintenance officer had a conference call with the NTSB to follow up and said they had a very candid conversation and that the NTSB was “very informative, very friendly, and they are going to get to us and we’ll get the final NTSB report at some point. We’re anxiously awaiting that.” At the time of writing, the final report had not been issued.

The crash did receive media coverage – it doesn’t take long to do a search for the N-number to learn who owns the airplane. Despite stories on TV and in the newspaper, the club only received one phone call from the press – but nothing in depth, Carl said. “I didn’t know that much and I didn’t say that much. It was very generic and benign,” he said. “They [the press] came up with [the information] all on their own and there were no misrepresentations.”

The incident also reinforced the club policy that media requests be directed to the club president or his designee if there is an incident.  "This ensures the facts are presented correctly and consistently while protecting the privacy of those involved," Carl said.

Since there were no injuries or fatalities, the press questions were not as invasive or probing as they might otherwise be. Clubs would be wise to put together some basic information about the club and your aircraft so in a crisis, you already have a fact sheet or something you can easily provide to help the media properly report on the incident.

It’s important to remember, most media have little to no experience with General Aviation. Being able to provide accurate information on things like aircraft type, number of seats, amount of fuel capacity, etc. to help the media report on the incident properly will have long-term benefits. Often times misinformation or misperceptions in the public can cause opposition or challenges to a club. By being prepared and working with the press, you can help avoid that situation.

Impact on the Club

Following the accident, the club’s Board of Directors created a special committee that met with the pilot a few days after the incident to get debriefed and understand from him what had happened while it was still fresh in his memory. The three-member panel included the club vice president, the chief pilot, and a general member.

"The Pompano Beach Flying Club adheres to the principles of 'just culture,' which views incidents of all types as learning opportunities," Carl said.  "This approach is designed to encourage the pilot to share, in a non-blaming environment, what situational factors he encountered during the flight.  In this instance, the pilot was asked to share what, if anything, he might have done differently if he were presented with the same or a similar incident in the future."

It should be noted the investigation is still open, so a cause has not yet been determined. Once the NTSB issues a final report, the club plans to review the findings and hold another safety to meeting for the general membership. 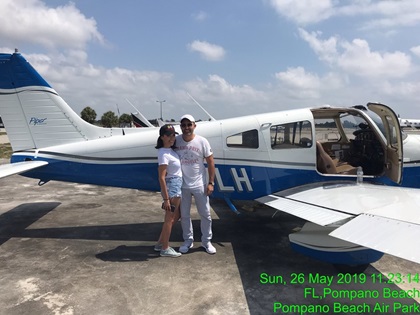 The board of directors also made the decision to look for a replacement aircraft immediately. There are many members who are part of the club because they wanted access to a six-place aircraft like the Cherokee Six.

Finding the right aircraft took some time, but by November, about eight months after the crash, PBFC had purchased a newer, upgraded Cherokee Six. The new aircraft was more expensive than the value of the old aircraft, requiring the club to come up with some money to cover the difference between what the insurance paid and the purchase price.

Although no club ever wants to have an accident, it is important to think about it ahead of time and have a plan. While a crash may present challenges and could be upsetting, particularly if a club member is injured or worse, the organization can soldier on, continuing to operate after losing an aircraft.

Having organized records to provide to the FAA and NTSB for the investigation is helpful. As is having some talking points for possible press inquiries to help the media accurately report on the incident.

With proper planning, a club can meet the challenge of losing an aircraft and continue to operate successfully. In the case of the Pompano Beach Flying Club, they addressed the issue at the club level, acquired a new plane, and have continued to operate. “To us now, it’s history,” Carl said.