The Skyhaven Flying Club may be the oldest club in New Hampshire, but it is anything but antiquated. It was founded in 1936 by a group of University of New Hampshire engineering students who found a Waco glider in a hangar, which became their project. Today the club has 56 flying members and operates a Cessna 172, a Cirrus SR20, and an FAA-approved flight simulator. 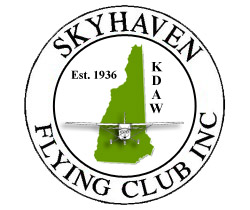 “The club has evolved over the years with different planes, and we always want to make sure that we keep everyone who loves to fly flying,” Membership Director John Loop said. “But [we want to] keep them in pace with where things are going in General Aviation.”

One of the ways they are doing that is with a FlyThisSim TouchTrainer flight simulator. About three years ago, the president at the time purchased the simulator for about $12,000 for his own use and chose to make it available to club members for an hourly fee. It was listed on Schedule Master with the club’s aircraft. Members could chose to pay an hourly rate, a lifetime membership rate, or an annual unlimited use rate. 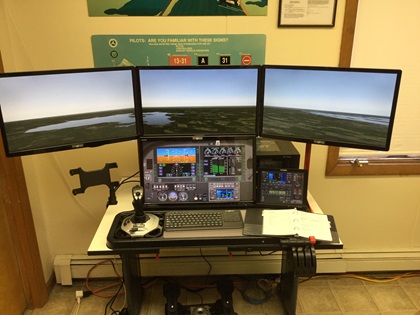 After two years, the club purchased the sim and this year made it a free benefit to members as part of their dues, making this valuable tool easily accessible. To put it into perspective, an FBO at a neighboring airport also has a FlyThisSim available for $50 an hour, John said.

Skyhaven uses its simulator for a variety of purposes – VFR training, IFR training, familiarization with a glass cockpit, and transition training to the Cirrus.

“A Cirrus is very checklist orientated and having that cockpit familiarity is really critical,” John said. “ A lot of the training we do in transitioning someone from the Cessna over to the Cirrus, we’ll incorporate time in the sim to get people comfortable at what they’re looking at before they actually sit down in the Cirrus.”

About half of the club’s members are currently checked out in the Cirrus, but that number is likely to go up this spring as the 172 is getting a complete panel makeover. It currently has steam gauges and a Narco radio that will be upgraded to two Garmin G5s, a GTN 650 GPS, A Garmin 255A Nav/Comm, a GFC 500 autopilot, and digital engine and fuel monitors.

“All that equipment is going to dramatically change the face of this plane,” John said. ‘Having the ability to sit in a simulator with all of this information is going to be pretty significant. The advantage is going to be huge.” One of the big differences is going from reading steam gauges, like a round altimeter, to going to a ribbon. The simulator will help with that instrument familiarity, which is critical especially when the unexpected happens. 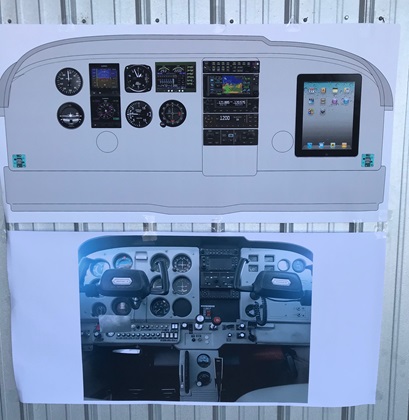 In addition, there are going to be a lot of members transitioning to the Cirrus using the sim system while the Cessna is offline, John said. As an incentive to get members checked out in the Cirrus, the club will cover the $40 an hour cost of an instructor for the transition training.

One of the advantages of the FlyThisSim is its interchangeability. “We wanted this one because it has the multiplatform for different airframes,” John said. “You have the ability to switch a couple simple things and go from a Cirrus configuration to the Cessna.”

The simulator has two panels with the aircraft instrumentation and three screens that wrap around to provide an outside view, active rudder pedals and interchangeable throttle quadrant and yoke/sidestick. An instructor can use an iPad to create training scenarios for a student, such as failing an aircraft system or changing weather conditions. 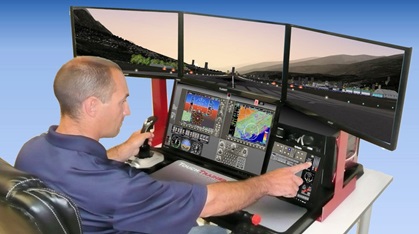 The sim meets the FAA requirement as a Basic Aviation Training Device (BATD) and up to 10 hours can be logged for IFR training. It also can be used to log IFR currency.

An advantage is the unit can mimic your fleet aircraft. Skyhaven’s Cirrus has an Avidyne sytem and the Cessna is all Garmin. Their FlyThisSim is on a Garmin system but has the update for Avidyne, John said.

One challenge is that while you’re learning “buttonology,” you’re not reaching out and turning a knob on this simulator. “That is a bit of a disadvantage,” John said. “But having the ability to locate and knowing where things are is good. Some of it is conceptual in that you can’t reach over and turn up the volume or turn it down, you have to use the mouse.”

Although this simulator does not have the tactile feel that other simulators offer, the flexibility in being able to replicate either aircraft in Skyhaven’s fleet is much more important to the club.

The simulator is an effective tool that helps improve safety by giving members the opportunity to practice a variety of scenarios in different conditions that you might not be able to do, or want to do, in an actual aircraft.  And it can ease the transition between different aircraft with very different panels, like the Cessna and Cirrus.

When Skyhaven had the opportunity to add the simulator into the club and include it in the membership, it was a simple decision. It helps ensure their pilots are safe, gives them an opportunity to stay current, even when weather in the Northeast isn’t good, and provides an additional benefit of being a club member.

It’s something John thinks other clubs may find valuable as well. “What I would recommend to anyone looking at a sim is feasibility, application to the club, and the ability to update it as your fleet updates,” John said.