Event Spotlight: Camaraderie, Holiday Cheer, and The Gift of Giving

The holiday season is a wonderful time for club members to get together, build camaraderie, and give the gift of giving. Several flying clubs across the country have long standing traditions that provide an opportunity for clubs to reach beyond their hangar doors and contribute to the larger, non-aviation community. Perhaps your club hosts a charitable event this time of year, or may get inspired to do so.

Serving the community allows a club to make a positive difference, build bonds among club members, and raise awareness of your flying club. Besides the immediate benefits to the community, it helps the public know, understand, and appreciate the value of general aviation, and who knows, it might even lead to a few new club members. 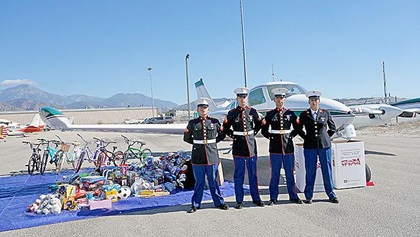 One of the best-known charity events this time of year is the Marine Corps Toys for Tots, in which people donate unwrapped toys for children whose parents can’t afford gifts for the holidays.

The West Central Georgia Flying Club and the Thomaston-Upson County Airport (KOPN) are hosting a variation of this tradition, with their 25th Annual “Fly for Tots” event. Since 1994, on the first Saturday of December the club has invited the public to the airport to collect toys and money for the local Empty Stocking Fund, a non-profit that provides gifts to underprivileged children in Upson County, Georgia.  In exchange for a donation of an unwrapped gift valued at $20 or more, or a contribution of $20, people can receive a flight over town or a pancake breakfast. Children under the age of 16 may fly for a donation of just $10. Read more about in in the January 2015 Club Connector. 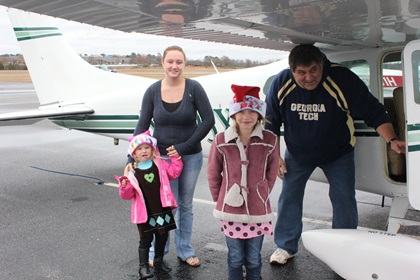 Other aviation organizations host similar Toys for Tots events including two in California held this month – one at Oceana Airport (L52) and another at Ramona Airport (KRNM).

For 25 years, beginning in 1989, the NASA Goddard Flying Club did something similar called Wings of Warmth. The club doesn’t operate any aircraft, but focused on building camaraderie and aviation education through guest speakers, hosting FAA Wings seminars, and offering the use of an FAA-certified simulator that club members could use for free. Although the club still exists, it isn’t as active as it once was. 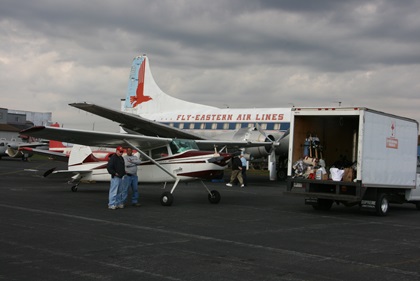 Wings for Warmth began when a club member saw two stories on the news – one was about a plane crash and the other was about the poor at Christmas. He wanted to do something to put general aviation in a positive light and decided he could give pilots a reason to fly by helping those in need.

Each year, the club collects clothes, blankets, food, and toys, and members load their aircraft based at several airports around Maryland and fly to Carl A. Spaatz Field in Reading, Pennsylvania (KRDG) where everything is donated to a rescue mission. Read more about in in the November 2013 Club Connector. 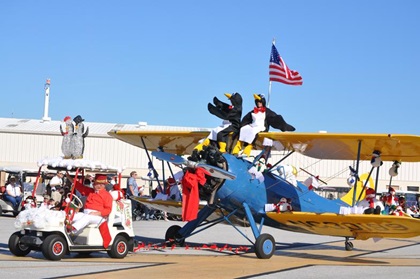 When most people think of Christmas, images of snow covered pine trees, hot chocolate by the fire, and neighbors going door to door singing carols usually come to mind. You’d be hard pressed to find snow in Florida, but that hasn’t stopped the Spruce Creek Flying Club from spreading holiday cheer through the Fly-In Airpark with its annual Toy Parade, which will mark it’s 35th anniversary this year.

The annual Christmas parade “is a celebration of the joys of the Christmas season and the child in each of us” and “features decorated airplanes, boats, cars, golf carts, and just about anything else you could imagine,” according to its website. The parade goes down the Airpark’s streets, taxiways and the runway as residents come out to participate or watch the festivities and enjoy each other’s company.

One of the best-known general aviation holiday traditions is the Tangier Island Holly Run, which began 51 years ago in 1968. For the past several years the Chesapeake Sport Pilot Flying Club located at Bay Bridge Airport (W29) east of Annapolis, Maryland, has cooked the pancake breakfast sponsored by Vans Aircraft before pilots fly boughs of holly out to the residents of Tangier Island, Virginia. 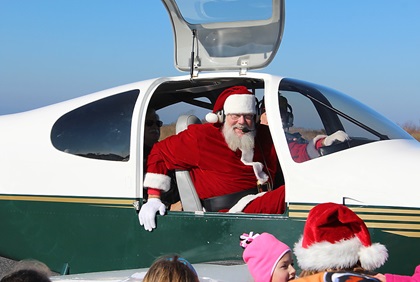 The event is limited to 50 aircraft because that’s all the airport in Tangiers can handle. Tangier is an island in the Chesapeake Bay that is only accessible by plane or boat.  Over the years, rising waters have shrunk the size of the island and most of the holly trees and evergreens have died. In 1968, a local pilot named Ed Nabb started loading up his Ercoupe with holly to fly to the island and a tradition was started.

These are just a few events that flying clubs and aviation organizations host during the holiday season to give back to their communities and provide members with an opportunity to enjoy each other’s company. Events like these during the winter provide a fun way for clubs to keep members engaged, while raising the club’s profile outside the airport fence. If your club participates in interesting events to keep members engaged during the winter months, please let the flying club staff know by emailing [email protected]