Club Spotlight: The Upper Valley Flying Club Balances What to do in the Winter

Lebanon, New Hampshire averages 68 inches of snow each year and the average low temperature in January is 8 degrees. Not what most pilots would consider ideal flying conditions.

For the 48 members of the Upper Valley Flying Club, based at Lebanon Municipal Airport (KLEB), it’s normal. “We have a really traditional winter here, it’s January through March basically,” Club President Matt Bucy. “We can get snow before and after that, but that’s really when it gets winter on us.” 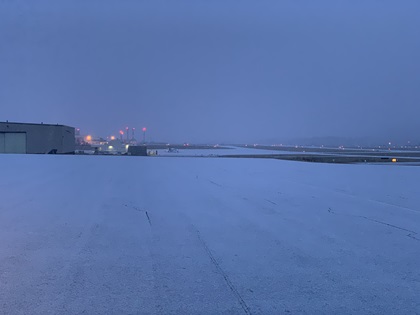 So what does the club do in the winter? Are the club’s Cessna 172 and 182RG relegated to being hangar queens for a few of months allowing scheduled maintenance, such as an annual or upgrades, or do the members continue to fly regularly?

These are questions that many clubs located in cold weather states face this time of year. For the Upper Valley Flying Club, the answer is a little bit of both.

“The days are shorter, so there is a lot less flying,” Matt said. “We don’t encourage flying at night because the terrain around our airport is totally inhospitable. Even in daylight there aren’t a lot of landing spots.” 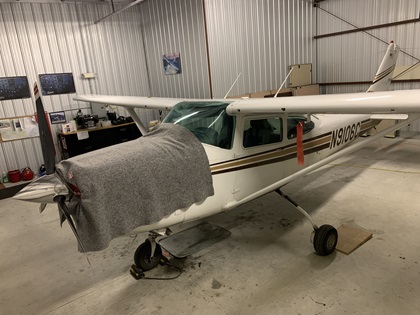 So the members take advantage of the few daylight hours they have in the winter. “Members are scheduling the planes out quite a bit,” Matt said, “The 172, any time the weather is good, it’s flying. I get the most complaints about plane availability in the winter.”

To keep the planes flying year round, the club uses engine and cabin preheaters when temperatures fall below 40 degrees. Typically, it starts getting cold enough to preheat by the middle of October and they continue to do so through April. 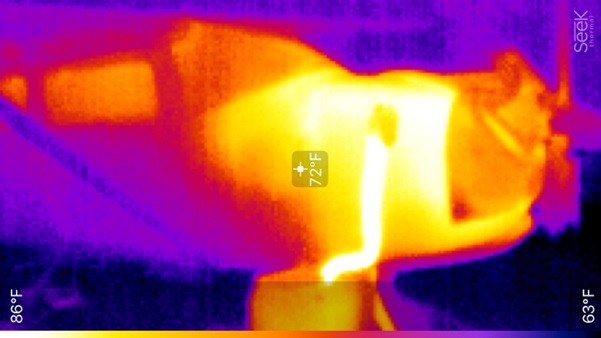 “The planes fly enough that we just leave the preheaters on 24/7,” Matt said. “We use cabin heaters as well.” Keeping the cockpit warm helps with the avionics and instruments. The club has had problems with its gyros and Matt thought the cold spin-ups may have caused a lot of wear and tear on them.

The cabin heaters are aircraft certified and maintain the temperature in the planes at 55 degrees. The club uses Reiff engine preheaters that plug in, along with a blanket to cover the cowling. “The blanket makes a huge difference in preheating,” Matt said. It also uses cowl plugs to help keep the warmth in the engine compartment. When members fly to another airport in the winter, they can ask the FBO to plug in the preheater while they are there or take the plane into a hangar to get preheated, Matt said. 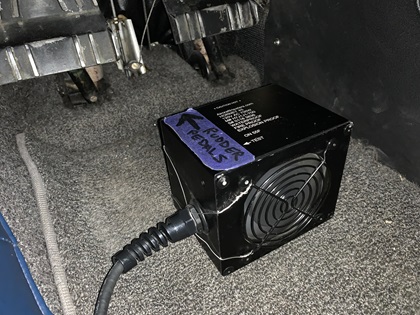 Once the aircraft are preheated and ready to fly, members need to be wary of the ramp conditions. “Our ramp gets pretty seriously iced up,” Matt said. “Our CFI sent an email out about what to do if you start the engine and the plane starts to skid across the ramp with the brakes on.” The short answer – is shut down.

The club has a very strong safety culture and strict proficiency standards. “Our maintenance officer sends out briefings really often about things in the plane, procedures that need to be paid attention to,” Matt said. The emails include safety messages containing useful information, tips, and links to other resources. 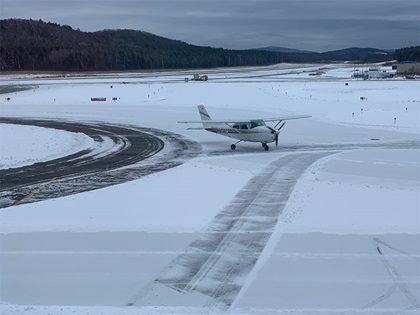 The email about ramp ice reminded members that if they “have not operated on snow and ice you must get Dual from a CFI,” and encouraged members to get familiar with the FICON (Field Conditions) rating system the FAA uses. It is available from the CTAF, ATIS, and NOTAMS. The email even included a link to learn more, using resources like boldmethod.com. Another resource is AOPA’s Air Safety Institute that has several tips on winter flying including the ASI Safety Tip: Runway Conditions.

In addition to encouraging members to visit various safety web sites to increase their knowledge, the monthly meeting sometimes includes a program with a safety topic. “One of our members is a helicopter paramedic, so he came and did a winter survival workshop,” Matt said.

During the summer months, meetings are held at the hangar and they barbeque. October through May, the club moves indoors to the warmth of local restaurants, typically where there is a private room where they can eat and conduct business. 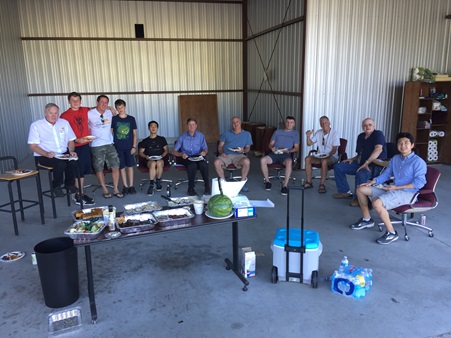 Each January, the club holds an annual meeting using the FBO’s lounge, which is where big decisions are made. Matt said it’s the most attended meeting of the year, in part because things such as adjusting hourly rates are discussed and decided. It’s also when officer elections are held. The winter months, when there is less flying taking place, is the perfect time to keep members engaged by having conversations about strategic planning and goals for the new year.

Although club members fly throughout the winter, the Upper Valley Flying Club tries to schedule its heavy maintenance during this time of year because there is less flying than in the summer. If possible, taking a plane off the line for any period of time, like doing an annual or avionics upgrades, is always best to do when members are not flying as much.

The club buys rebuilt engines that can be shipped to the airport and installed in the airplane over several days, limiting the down time of the aircraft. An overhaul usually takes six to eight weeks, plus the time to remove the engine and ship it out.

“What we can do with a swap out rebuild is we get the engine in house and usually three days later it’s up and running again,” Matt said. “We do some test flights, make any adjustments that have to be done and it’s not down very long. Losing eight weeks of flying revenue [if you were to do a traditional engine overhaul] is a pretty big hit.” 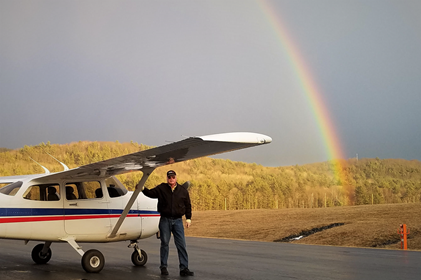 Over the past few years the club has replaced most of its gyros on both airplanes, so the panels are now all glass. Matt estimated that about 25 percent of their maintenance was gyro related, so going forward the planes should require less winter maintenance.

As the winter progresses, daylight hours diminish, and flying time is limited, clubs have a great opportunity to keep members engaged by taking care of business. That could be strategic planning, completing bigger maintenance projects and upgrades, or taking the time to brush up on seasonal flying skills that are necessary to stay safe in the winter. The Upper Valley Flying Club in Lebanon, New Hampshire is a good example of doing all of those things.