Vans Aircraft are known for their speed, performance, affordability, and for being fun. That’s why their owners are struck with a condition known as the RV grin. FAR 91.319 prevents an experimental aircraft from being operated in a traditional rental fleet (carrying persons for compensation or hire), but a non-profit equity flying club may fall outside of this regulation.  Bear in mind that any experimental aircraft has to be operated within the applicable FARs and the specific operating limitations for that particular aircraft (for more information on operating an experimental in a flying club, see the Question of the Month).

There are clubs, such as the equity-based Spirits of Aviation Flying Club near St. Louis, MO, where each club member is an equal co-owner of an airplane.  The club built its RV-12 and club member Dave Doherty shared their experience operating this popular Experimental Light Sport Aircraft (E-LSA). 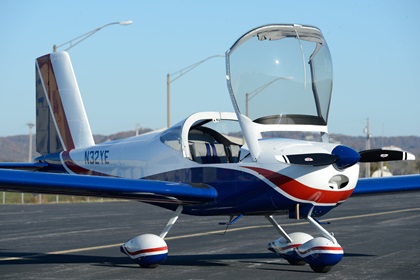 One of the main selling points of the RV-12 is its low operating costs. The Spirits of Aviation was created by six members of EAA Chapter 32 that wanted to build an aircraft and operate it in a club environment (See this month’s Club Spotlight). The members spent about $90,000 to purchase the kits to build the aircraft and each owns a 1/6-share.

The plane is powered by a Rotax engine and the club runs it on MOGAS. At the time of writing, auto fuel in the St. Louis area was about $1.50 cheaper than avgas. In cruise, Dave said it burns just under 5 gph, but he said operating at 50 percent power if you’re just staying local you can get the fuel burn down to about 3.5 gph. The club charges just $10 an hour, dry (yes, you read that right!). 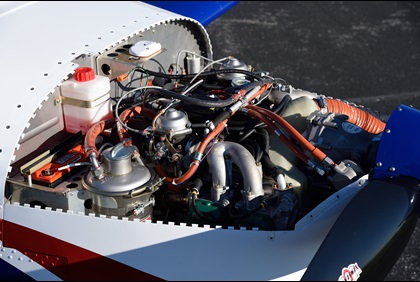 Because it is an experimental, the club can do its own work on the aircraft. As an E-LSA club members had to take a two-day course to earn a repairman’s certificate so they could do their own maintenance, which keeps costs down. In the three years operating the aircraft, the club has flown 780 hours and hasn’t had any major maintenance issues.

An advantage of operating a homebuilt is your club will have its choice of avionics. The options are much greater and cheaper for experimentals than for certified aircraft, which is a big advantage that goes along with doing your own maintenance.

With more than 500 RV-12s flying, and thousands of RVs in the air, the company and aircraft are a known quantity. The club had no problem getting insurance and its policy covers liability and the hull. They pay $3,800 a year and the policy allows up to six members to fly the aircraft. Other clubs operating experimental aircraft have found insurance rates are similar to other common club aircraft like a Cessna or Piper.

“It is a very honest flying airplane,” Dave said. “It is light on the controls, easy to fly and very easy to land.”

There are flight schools that use RV–12s (the S-LSA) for flight training, and even some high school aviation programs where students build an RV–12.

One thing that is a little different is that it has a castering nose wheel with steering done with differential braking. There are stops to keep the wheel from going around into the propeller. It rotates about 60 degrees either way, allowing a pilot to turn on a dime. Dave said it’s something you get used to it pretty quickly. 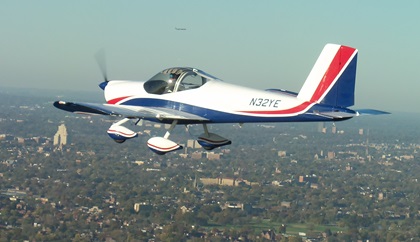 As an LSA its cruising speed is limited to 120 knots and a max weight of 1,320 lbs. It only has two seats, 20 gallons of fuel and not much useful load, so you’re going to have to pack light. With a low fuel burn, you can fly for about 3 hours with an hour reserve, so it will get you several hundred miles relatively quickly and economically. Club members have flown the plane on longer trips. One member flies to visit family in Ohio once a month, and members have flown the plane to Oshkosh for AirVenture and Sun ‘N’ Fun in Florida.

It is equipped with a Dynon SkyView EFIS, programmable flight computer and has an autopilot with a wing leveler, making it more than capable for longer flights.

The RV-12 has a good reputation and it’s a popular airplane no matter how it was built – by Vans (S-LSA), or from a kit as an E-LSA.  It has excellent performance with a take off roll of 400 feet, Dave said, and even less if you’re flying solo. 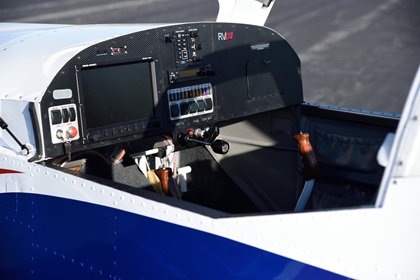 “It’s a really responsive aircraft,” he said. “It’s very smooth on the controls, with good control harmony. We felt it was the best [aircraft] out there, but that’s a matter of individual choice.”

The canopy provides excellent visibility, making it good for both pilots as well as passengers. “With your seat close to the leading edge of the airfoil, you can almost look straight down looking out of the aircraft and you have visibility all around. We take people riding in it and they remark how much you can see. It’s lots of fun.”

If you’re looking for a fun, fast, affordable, and high-performance aircraft, that falls within the LSA category, the RV-12 is a good choice. Dave summed it up best: “It’s a tremendous little airplane to fly. It’s fast enough to go cross country and economical enough to just putt around and do some sightseeing if you want. I think it’s the best of many of the worlds. With the glass cockpit, you’ve got avionics that are close to on par with the airliners. It has ADS-B in and out, a programmable flight computer, and an autopilot with an automatic wing leveling device. It’s very responsive in all axes. It’s just a joy to fly.”