When Bryan Jakubik attended a Rusty Pilot Seminar in November 2017 he was just looking to get back into flying. He had no idea he was going to be a founding member of the 100th flying club started under the AOPA You Can Fly program.

The Midway Flying Club, based at Mid-Way Regional Airport (KJWY) in Midlothian, Texas about 30 miles south of Dallas, officially began operations in January. The club was honored at the Sun ‘N Fun Fly-In in Florida this month with AOPA President Mark Baker presenting an award to the founders. 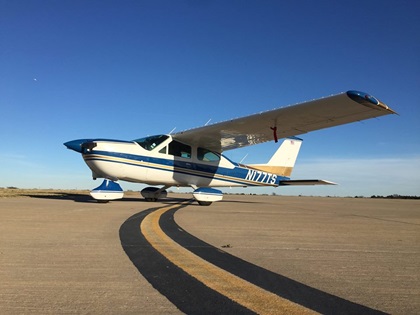 Bryan, who is the club secretary, earned his Private Pilot certificate in the mid-1990s at Navarro College, but it had been 14 or 15 years since he had last flown before attending the seminar. “I originally wanted to get back into flying. So I attended the Rusty Pilots seminar that morning and there was the Maximum Fun, Minimum Cost seminar happening that afternoon that [AOPA Ambassador] Pat Brown was hosting,” Bryan said. “So I went to that one.”

The Maximum Fun, Minimum Cost seminar is an AOPA presentation that goes though all the basic information about what a flying club is and the key components on how to start a club and get it running [See this month’s Event Spotlight].

“Originally I had hoped to find a club to join because I really wasn’t interested in forming a club and having to do all that extra work,” Bryan said. “But it got to the point where I realized if it was going to happen, it had to happen with my help.”

After the seminar Bryan emailed Pat about forming a club. So did Allen Story, now the club president. A third person who had a Piper also was interested in forming a club. Pat helped get the three in contact and they exchanged some emails. Around the same time, Thierry Saint Loup, who is the club treasurer, saw a post from Pat mentioning some interest in forming a flying club, so he reached out to him.

Like Bryan, Thierry also began flying in the 1990s and had a 10 to 12 year gap away from flying while he was starting his career and family. “I was thinking there ought to be a flying club around here, but there’s nothing,” Thierry said. “When I heard that Pat was aware of some other people interested in putting together a flying club, that’s when I asked him.”  Pat connected Thierry with the group, but nothing immediately materialized.

So Thierry suggested the group meet. In July, the four men met at the Lighthouse Coffee shop in Midlothian to discuss their interests, flying backgrounds, where to base the club, legal structures for forming a club, purpose and mission, as well as possible aircraft.

“By the end of the meeting we had a list of action items to complete and we were on track to get the club organized,” Thierry said. “We met again and again to try to refine what we wanted to do. We all clicked. We started with four people but one had to drop off. So it was the three of us, Allen, Bryan and I, left to really get the flying club going.”

The decision was made to form a non-equity club and Bryan took the lead on the legal aspects of forming the club. They reached out to Pat for guidance, and he recommended using Boyd W. Shepherd, an attorney at Aero Entity in Houston who helped the club create a legal entity and complete the application process for 501(c)7 status as a non-profit social organization. That was in October 2018 – just a few months after the group started meeting face to face.

The group discussed possible aircraft and agreed that as a new club, they didn’t want to take on too much risk, Thierry said. Nothing too complex, nothing too expensive. They wanted something with four seats and economical to operate, and decided something with a four-cylinder engine and fixed gear would be best. They discussed the possibly of a Grumman Tiger or a Cessna Cardinal.

Even before searching for an aircraft, Thierry added the club’s name to the hangar waiting list at Mid-Way Regional Airport and introduced himself and the nascent club to the airport management team, which was very receptive to the idea of a club on the field. He also stopped by Southern Star, the local maintenance shop, to see if they knew of any aircraft for sale. They put Thierry in touch with an owner of a Cessna Cardinal who might be interested in selling.

After negotiating with the owner and completing a pre-buy inspection, Thierry purchased the plane in December and the club began leasing it on January 1, 2019. Later that month, the club’s web site went live and they hosted Pat Brown for another Maximum Fun/Minimum Cost seminar to officially introduce the club to the aviation community and become fully operational.

There were several lessons the founding members learned in the process of getting the club formed. To start, if you’re interested in being part of club, see if there are any near you. If not, maybe there are other pilots in your area that want to form a club.

“One thing that AOPA is doing that is excellent is the Flying Club Finder website,” Thierry said. “You can see the map of the U.S. That is the best way to find clubs. If you don’t find a club nearby, contact AOPA. To me that is the whole key.”

Another lesson learned was taking advantage of the resources and contacts AOPA and its Ambassadors have.

“AOPA is a matchmaker. That’s the most important part. I would not have known about the other members. I would still be by myself today wondering how to get people interested in a club,” Thierry said. “With all the contacts that AOPA has, that is definitely the best way to do it. The most valuable piece is to get people connected and then you can explore different avenues to explore a club.”

Once you’ve been matched with some like minded people, it’s important to meet and come up with a plan. The biggest thing for Bryan, besides the guidance Pat and Boyd provided on setting up the legal aspect of the club, “was just getting us all together meeting up at the same time to talk about our common ideas,” he said. “Over the summer we were only meeting once a month. Looking back we should have been meeting every week or so. Once we got the filing done around October, we started to meet every week. That’s when we really got everything going.” 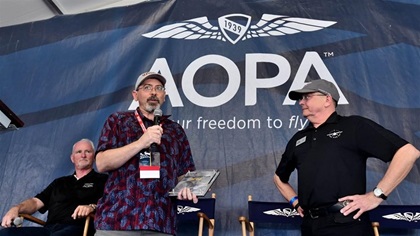 Thierry’s advice is to remember to have fun, make a plan, and consider the entire process as a learning experience. “There’s no rush in creating a club. It can look like a huge task with many different pieces to tackle, but tackle them one at a time,” he said. “Try to plan ahead, for example if you want to have a hangar. There are some pieces you have to start with right away, so by the time you have a club everything comes together. Just have fun doing it. Take it all as a learning experience rather than a mountain of issues you have to deal with.”

Being the 100th flying club created as part of AOPA’s You Can Fly program, “was almost surreal. It was exciting. It was nice to be recognized,” Bryan said. “It felt like it was an important part of helping to promote general aviation. For me being out of it for so long and to be up there and accept the award – just don’t give up on your dreams. Hopefully will see the 200th, the 250th, and the 1000th club formed with the momentum this has.”