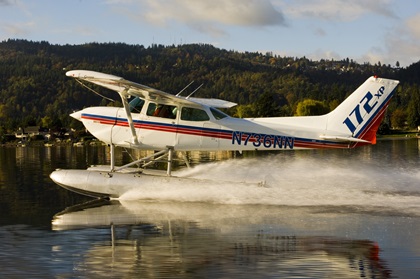 When talking about floatplanes, it’s easy to immediately think about a de Havilland Beaver or Piper Cub. But there are plenty of Cessnas on floats as well, including the 172.

Having a seaplane in a club adds a high-risk aircraft to your fleet, but the rewards of being able to fly to places you wouldn’t otherwise be able to reach may make it worth the challenge. It also differentiates your club by offering an aircraft type that is otherwise not readily available. “It is kind of a magnet for us,” Boeing Employees’ Flying Association President Bob Ingersoll said.

The Boeing Employees’ Flying Association (BEFA) based in Renton, Washington has operated a 172XP-II on straight floats for decades. Bob, along with the club’s Operations Manager Wes McKechnie, share how BEFA uses its 172 with an STC to boost its IO-360 to 200 hp.

The Cessna 172 Skyhawk debuted in 1956 and is the most produced aircraft in history with more than 44,000 made. It originally featured a 145-hp Continental O-300 engine and a fixed-pitch prop, which was eventually upgraded to a 150-hp Lycoming O-320 and then a 160-hp version.  BEFA’s 172XP-II has a 180-hp Continental O-360, with a constant speed prop that has been boosted to 200-hp with an STC. The added horsepower improves takeoff performance over a 172 with a smaller engine – an important factor when operating on floats.

“You do burn more fuel with this airplane. It’s got a constant speed prop, so it’s not a standard 172,” Wes said. “The engine was a stock Continental 180-hp engine but it’s been boosted to 200-hp, so you are going to suck some more fuel,” Wes said. And with the floats, there is added weight and drag.

Fuel burn is about 10 gph and BEFA charges about $164 an hour, Tach time wet, which is adjusted monthly based on current fuel prices. A search for a 172XP on floats found the purchase price ranging from $60,000 to $149,000, depending on total time and avionics. 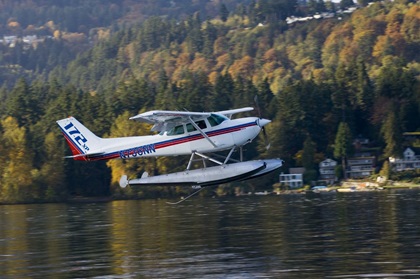 On one level, maintenance isn’t a problem because it’s a 172. Mechanics are familiar with the type and parts are plentiful. On the other hand, it’s a floatplane and that adds an entirely new set of issues that need to be checked out.

During pre-flight, “you’ve got to pump the floats out because moisture gets in them. Some amount will seep through the plugs, but you’ll always have a certain amount of condensation as well,” Wes said. And you’ve got to check the structure. Floats are rigid so they don’t have that spring steel landing gear to absorb a hard landing.

“One of the issues with this type of airplane that’s a negative is it wasn’t a purpose-built floatplane,” Wes said. “ The [Cessna] 180s and 185s were prebuilt to convert to a floatplane if so desired. These planes [the 172s] weren’t, so you don’t have as many attach points for the engine. That tends to put a little more stress on the firewall. So you can have some hard landings and you’re not going to damage anything on the airplane per se and then you go in for routine oil change or something and then you realize there’s some damage, a wrinkled firewall or something like that. That’s kind of a big issue.”

Probably the most important issue is corrosion, particularly if you are operating in salt water. It’s something that needs to be addressed post-flight to begin mitigating the effects. That means washing the plane down and “using an LPS to spray it at various attach points with corrosion proofing,” Wes said.  “We use a certain grade of spray-on oil—the LPS and WD-40 type stuff.  You can’t use too thick of one otherwise it starts gumming up the controls. It’s definitely a different animal.” 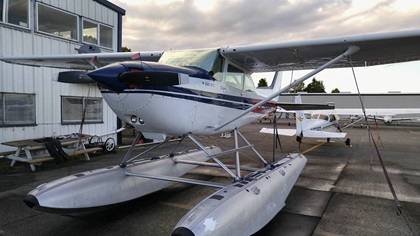 Another maintenance issue is the possibility of dents and dings on the floats. This is going to happen, so from time to time, it may be necessary make some repairs or reskin portions of the float. And the propeller will experience more wear and tear because of the spray. Annuals are going to be more expensive as well. BEFA tends to spend about twice as much on an annual for the floatplane than it does for its standard 172s on wheels.

BEFA’s 172 is on straight floats and getting insurance hasn’t been a problem for the club, because of its long history and safe flying record. However, its insurance is not standard as it is more like a corporate flight department policy than a club policy, Bob said.

When it comes to getting insurance for a float plane, costs will increase greatly if the plane is on amphibious floats. “Landing with the wheels down [on the water] is the problem with those,” Wes said. “You are going to flip and that’s the end of that.”

The insurance company requires pilots have a minimum of 10 hours of seaplane time and at least 10 hours in type. “You could be a 1,000-hour Beaver pilot and never have stepped in a boosted 172 XP, and you’re going to get 10 hours of dual in that thing. That’s the way it is,” Wes said. 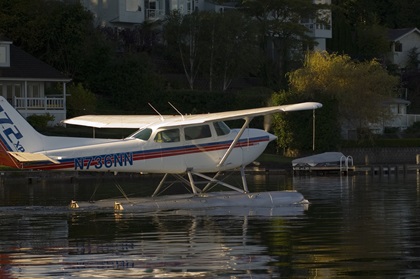 Some advantages the 172 offers is it is a simple plane to fly and has been used for decades as a primary trainer by many flight schools. Putting it on floats doesn’t change that. In the air, it flies like a 172, even though it is heavier. Most pilots have time in a 172, so it makes familiarization a bit easier. However, with the XP does have more horsepower and a constant speed prop, which may be a little different for some pilots.

“If you take float training, it’s not all that different concerning the air work – steep turns, stalls, etc. it’s all generic stuff,” Wes said “The problem is when you go to put it in the water. You don’t have a nice predictable concrete runway or grass strip. You’ve got variable conditions. Just imagine if that concrete was changing all the time – wavy and flat and who knows what. That’s what you’re contending with in a floatplane.”

Flying on floats is an entirely different skill set – learning to deal with wind, and currents, and having to be mindful of boaters on the water. But most importantly, it’s about decision making. “The decision making process is far more complex,” Wes said. But with any specialized flying, like a tailwheel endorsement or a glider rating, the skills you develop will improve your flying no matter what type of aircraft.

BEFA pilots don’t do too many long cross-countries in the float plane, Wes said. “Part of that is logistics. As non-amhib you’ve got to really do your homework where you can find fuel if you’re flying any distance,” he added.

The Pilot’s Operating Handbook for a 172XP on floats lists the cruise speed at 116 knots at 80 percent power at 6,000 feet. BEFA’s aircraft holds 68 gallons of fuel, providing a range of about 450 to 500 miles with a reserve. Although the aircraft has a useful load of 831 pounds, “pilots are trained to put a buffer in there. You want to get off the water as fast as you can and the more weight you have the longer you’re going to be beating that plane up,” Wes said. “Just because you can, doesn’t mean you do.”  BEFA members generally restrict flights to about 45 minutes to an hour out to a destination so they have plenty of fuel to return. 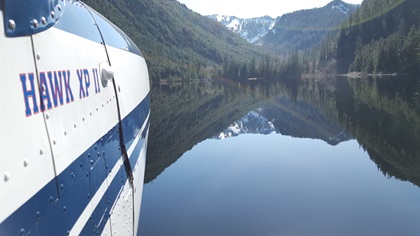 “The beauty of the Pacific Northwest is second to none in my mind,” Bob said. “You have mountains, you have water, you have unbelievable scenery. The experience can be very satisfying.”

The advantage of a floatplane is that it can take you places that you couldn’t otherwise get to. “Going into a high mountain lake, up at Lake Isabel, literally flying through cliffs and pulling 180-degree turns and dropping it into the lake and shutting the engine off and you’re out in the middle of nowhere,” Wes recalled. “It’s an absolutely extraordinary experience.”

And on another flight Wes had an experience that can only happen in a floatplane. After landing in Puget Sound with his instructor, they shut the engine off and were just drifting and chatting with both doors open, when she says, “Oh look, you’ve got a friend.” And right by the float is a harbor seal. “I’ll never forget having that harbor seal just kind of bopping up and staring at me,” Wes said.

Adding a floatplane like a 172XP to your fleet will definitely draw attention, but it is a high-risk airplane, so it won’t be suitable for every club. But if you’re in a region with lots of lakes, it’s definitely an interesting addition to your fleet. It will give your members a completely different flying experience, which not only enhances their piloting and decision making skills, but opens up a world of possible destinations that just enhances the joy of flying.