When a new flying club is in formation, one of the many resources available is mentorship from established flying clubs. In some cases those club-to-club mentorships take on a direct role. In others, the guidance may be a little less obvious, which is what happened with the Tri State Flying Club.

Based at Tri-State Steuben County Airport (KANQ) in Angola, Indiana, which is about 45 miles north of Fort Wayne, the Tri State Flying Club formed about two years ago. 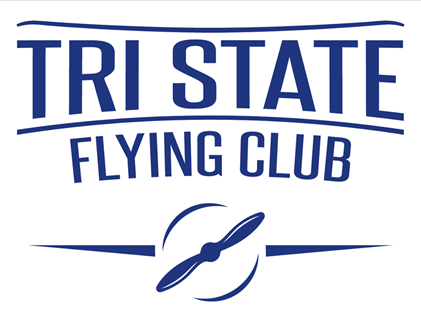 The county invested in a new terminal building and around that same time the composition of the airport board changed. The FBO and airport manager contracts were renegotiated and they left. “It left a gaping hole in northeast Indiana,” Club President Jacob Balyeat said.

As pilots have been known to do, a couple guys from the airport began talking. One of them bought a new plane and wanted to sell his old one – a Cherokee 140. “We had talked about buying an airplane before. We were out on the lake and said, ‘We should buy Sam’s airplane, he’s looking to sell it, and start a club. Let’s put our money where our mouth is. Cheers.’ So we did it.”

The next questions were obvious, “What do we do next? How do we set this thing up? What do we do?” Jacob said. Two rusty pilots had heard through friends at the airport about a club starting up, so they joined. And then the group turned to its resources. 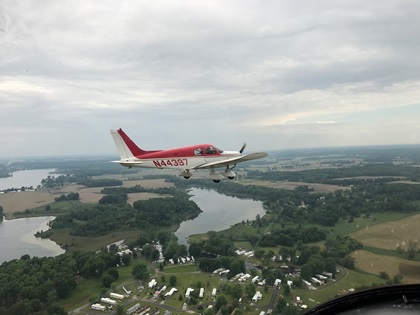 One was the Naperville Flying Club based at a private airpark (LL10), in a suburb southwest of Chicago, Illinois. "They did not mentor us in the traditional way of mentoring, but we had a member in common.  One of our founding members, who isn’t even a pilot, is involved there; his son was taking flight training and was flying out of the Naperville Flying Club. They have a summer home here, so that’s how I know them.”

Joe Willig and his son Zack shared their experience with the Naperville Flying Club with the other Tri State founders. Naperville is a larger club with four aircraft – a Piper Archer, a Cessna 172, a Beech Debonair, and a Piper Saratoga – and membership capped at 50. During the economic downturn about 10 years ago the club struggled with keeping members, but the club has recovered as the economy improved.

Tri State looked at Naperville’s bylaws and structure, as well as some specific language relating to how to handle safety and incidents, as well as operating rules like daily minimums and what to do if members are not paying their dues, along with how to keep the club operating in difficult financial times.

“That’s kind of how Naperville mentored us,” Jacob said. “Kind of indirectly through some of their experiences after the economic downturn and how they survived declining membership rolls before turning it around and thriving again.”

In addition, Tri State’s founding members looked at AOPA’s Flying Club Resources. They looked at the sample bylaws available from AOPA as well as the information about Naperville. The club looked at issues like “forming as a corporation versus not a corporation versus just slapping something together.” The decision was to incorporate.

They asked questions, such as, “How do we structure our bylaws and operating agreements so that we can get our (c)7 done the first time,” Jacob said. “We wanted to do it right the first time and have it be a long-lasting, sustaining entity.” 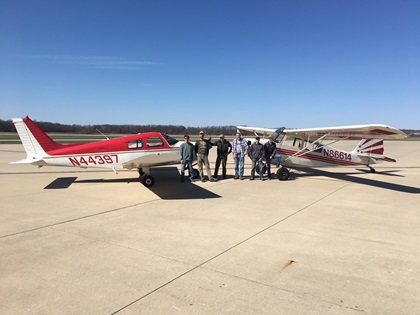 The result was an equity club in which the founding members paid $5,500 a share for the Cherokee 140. For tax purposes, the club was set up as a 501(c)7 social non-profit. After about a year, they decided to become an asset-based non-equity club, with the club owning the aircraft instead of members owning shares of the aircraft.

The idea was if there was an economic downturn Tri State’s assets would be secure and no member would have a claim on them, meaning the club would not be forced to sell an airplane if times got tough and members needed to leave the group.

The club’s mission is “to provide affordable access to all the benefits of airplane ownership,” but a driving factor is managing the club in such a way that keeps it going. “We want to grow aviation at our airport and in our community,” Jacob said. 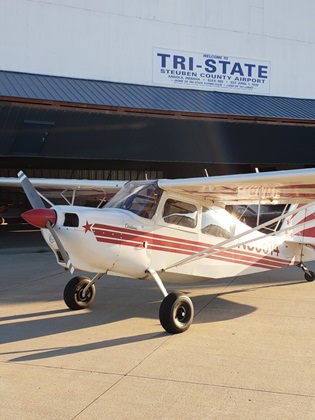 In just two short years, the club is fulfilling on that goal. Today, the club has 14 members and two airplanes. It added a Bellanca Citabria to the fleet this spring. The initiation fee is $1,500, dues are $70 a month, and both planes are $95 an hour, tach time, wet. Jacob expects the hourly cost to come down on the Citabria.

Tri State was able to sign a long-term lease for a large hangar with space for multiple airplanes and a clubhouse. Six of the 14 members own their own aircraft, three of whom bought their planes after joining the club. Several rent hangar space for a nominal fee from the club.

One member, David, earned his Private Pilots Certificate while in the club and another, Brett, added his IFR rating in the club Cherokee. They both wanted an aircraft that could go faster. Brett bought a Piper Comanche and gave David a ride. He liked it so much, he bought one of his own!  Both have also continued to maintain their membership in the club. 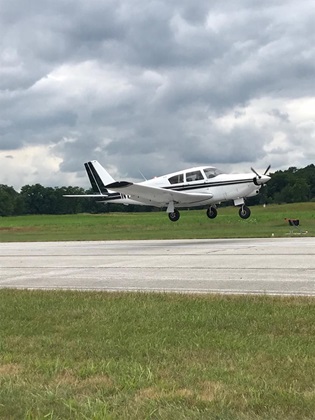 David has a rock and materials handling business and saw how general aviation could be an asset to his company. So in addition to his personal airplane he bought a Cessna 310 for the business and hired a pilot to fly staff, tools and equipment.

Another member hadn’t flown in years and joined the club to get back into flying. At one point he had an experimental project that had plateaued so once he was flying again, he went out a bought a finished Sonex to have some fun.  He just completed a cross-country flight to Dallas and back and wrote about the experience in the airport newsletter.

"The flying club enjoys a great partnership with the Board of Aviation Commissioners which runs the FBO.  Our hangar lease and fuel discount helps ensure our long-term financial viability and in return our success has grown the pilot population, increased hangar occupancy, and aviation activity.  The club alone is the second largest fuel customer and when we include our members personal and business activity we are by far the largest customer the airport has."

Because of the club, the airport has four new private aircraft on the field, renting hangars, and buying fuel, which demonstrates just how valuable a club can be to an FBO. Not to mention the benefit to local maintenance and avionics shops as well. 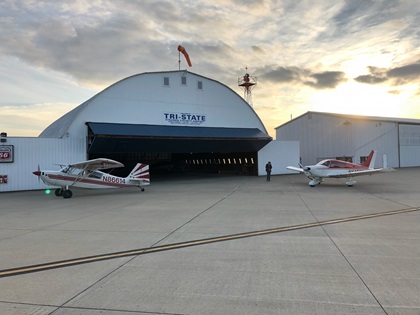 Community is the Key to Success

Tri State hasn’t limited it’s positive impact to just its own airport. Although it’s relatively new, Jacob keeps up to date with a few different clubs in the area and has offered to share what their club has learned.

One of the most important pieces to building a successful club was when Tri State got its own hangar with good community space giving members the opportunity to spend time with each other.

“That changed things. That was a dramatic improvement,” Jacob said. “What really made the difference was we put a big conference table in with six chairs around it. Put in a fridge. Now people want to come and just hang out.”

Having a hangar large enough for member-owned airplanes alongside the two club planes also helped increase the number of people coming, going and spending time in the club facility. They keep gallon jugs of peanuts in the hangar and the fridge is always stocked with cold beverages. 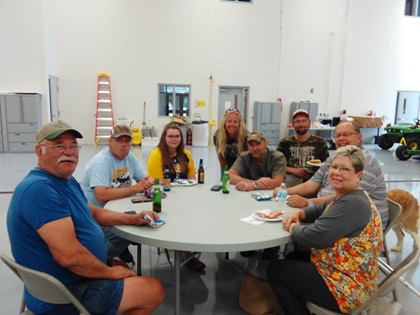 “I can’t overemphasize how important that has been for us. When you’re there it’s not just a business transaction,” Jacob said. “I’m here with my friends, lets have some peanuts, drink a drink. There’s hot dogs in here, anyone want a hot dog? That stuff is awesome.”

Paying It Forward and Mentoring Other Clubs

There’s a club based at Fort Wayne International (KFWA) called the Back 40 with a Piper Archer and a Cessna 172.  A couple of their members reached out to Tri State when they heard the club got a Citabria.

“They wanted to know how are we having so much success,” Jacob said. “We met and shared what a difference that community space made for us.”

One of the big differences between the two clubs is community space. The Back 40 are tenants in the county-owned building at a Class C airport – big and less personal. “When they want to fly they call the county. They roll the plane out and when they get there it’s sitting there. And when they get back, they get out and they walk away,” Jacob said. He also noted that they don’t do any of their own maintenance and they don’t see each other out of the airport so it’s harder to develop that sense of community.

He shared what a catalyst it was when Tri State moved from their T-hangar to the large Quonset hut hangar. Jacob suggested the Back 40 move one airplane to a small community airport on the north side of Ft. Wayne that has a flight school and brand new T-hangars. Most of the flight training that goes on in Ft. Wayne is at that location, which could present some opportunities for new members as they get their pilot’s license and are looking for flying options. In addition, the airport is on the opposite side of town, which is a 40-minute car ride from where the club is currently based, and that might attract different members as well.


“Success begets success in some part,” Jacob said. “People who are given a lot, have a lot of responsibility. We want to be very good stewards of our resources and give back to others.  We have built a strong sense of camaraderie among our members, their families, and the broader airport community here.  The people involved are what makes this club so successful and we need to be sure we do what we can to keep that culture alive.”