Aircraft Spotlight: The Taylorcraft BL-65: An airplane from another time with Light Sport credentials 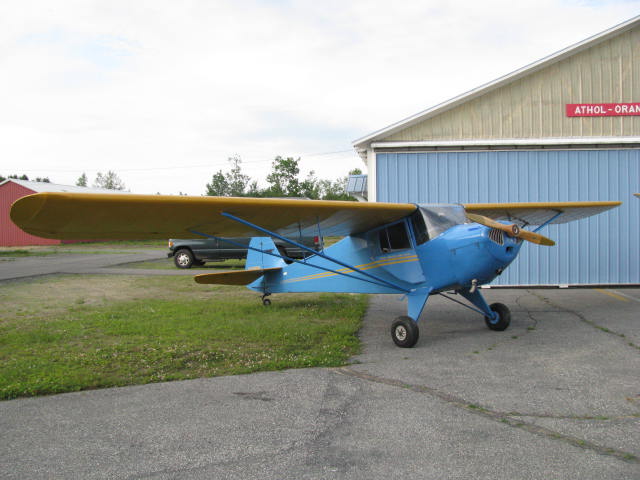 For a club looking to differentiate itself from other clubs or local FBOs, you might consider either a light sport or a taildragger since there aren’t many of either type available to rent. The Athol Orange Aero Club, based at Orange Municipal Airport (KORE) in Athol, Massachusetts, has two aircraft that fit both descriptions – a 1946 Aeronca Champ and a 1941 Taylorcraft BL-65. Most pilots are familiar with the Champ, but the Taylorcraft is a bit more rare and will be the focus of this Aircraft Spotlight.

With an empty weight of about 850 pounds, it meets Sport Pilot requirements and harkens back to a bygone era and a simpler age in aviation. It is a side-by-side two-place taildragger made of tube and fabric. There’s no electrical system, so it has to be hand propped and the panel is about as simple as you can get with just basic instrumentation and round automobile-style yokes. Club Vice President and Secretary Doug Mowry shares his experience with the Taylorcraft. 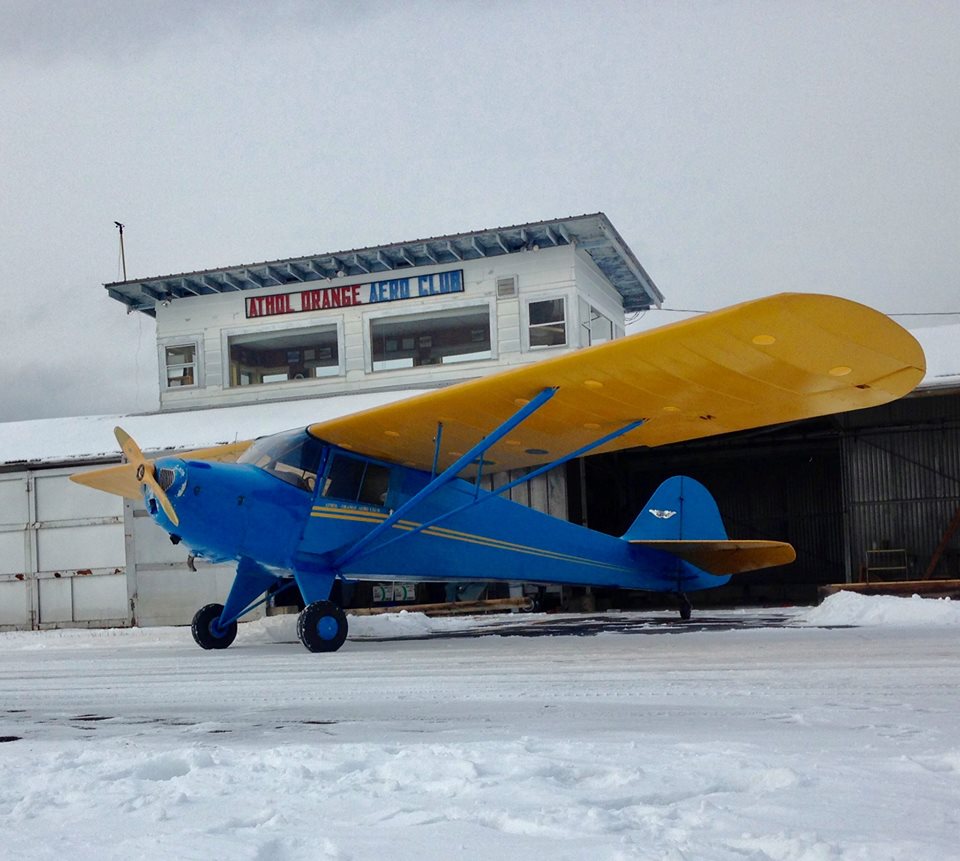 Operating costs are “pretty low,” Doug said. It burns about four to five gallons an hour, similar to the Champ, but the Taylorcraft is “probably 5 or 10 miles an hour faster.” It

Besides being less than half the price of a J-3 Cub or Champ, the Taylorcraft has a little better performance. Cruising speed in the BL-65 is about 90 to 95 mph, compared with about 75 mph in a J-3 Cub or 85 mph in a Champ. Athol Orange charges $35 an hour, Hobbs time, wet, but Doug said the rate hasn’t been adjusted in years and the club is looking at reevaluating its rates.

The Taylorcraft is very basic, making maintenance simple – there is no electrical system and only a few instruments, meaning fewer things can go wrong. The panel is dominated by a large tach in the center. It has an altimeter, airspeed indicator, and oil temperature and pressure gauges and that’s it. There’s no mixture control.

Annuals run are about $400 to $450, but keep in mind it is a tube and fabric airplane, so it needs to be hangared. And depending on how old the fabric is and how much exposure it has to the sun, it will need to be replaced at some point. Generally that could be every 20 to 25 years.

The plane itself is pretty common and there are plenty of T-crafts around. Maintenance is mostly engine focused. The B models came as an L, C, or an F – which indicates the type of engine, either a Lycoming, a Continental or a Franklin. Athol Orange’s Taylorcraft has the Lycoming O-145, which is “rated at 65 hp at 2700 rpm but the reality is you never hit that,” Doug said. “You probably get more bang for the horsepower buck out of the Continental than you will with the Lycoming.”

Parts for the Lycoming, and a mechanic familiar with working on one, could be harder to come by. Fortunately, the club member who owned the plane for 30 years before selling it to Athol Orange also provided an entire disassembled O-145 and another dozen or so cyclinders. So when the club has had an engine repair, they go to their parts room and see what they have – but most clubs won’t be so lucky. 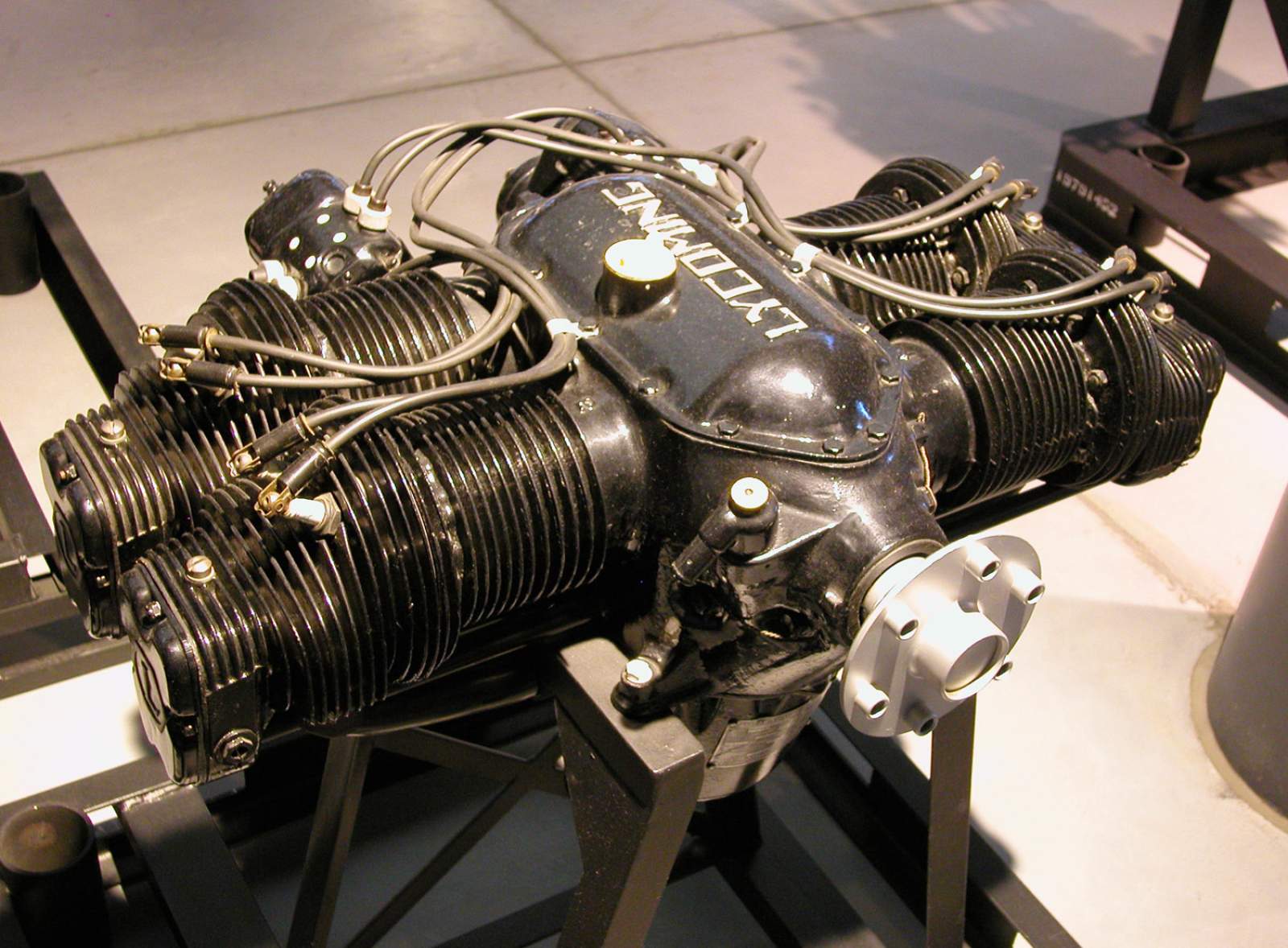 “There are a few peculiarities with the O-145, and if you happen to have spare parts laying around, you’re likely to find something that functions,” Doug said. “Otherwise you could be held up for the simplest little thing.”

The cylinders on the O-145 are cast into the crankcase. So the heads come off, but the cylinders don’t. When you split the case, you get two halves with two cylinders attached to each side. If you need to bore out a cylinder, you’ve got to pull the engine apart. “When it comes time to overhaul the Lycoming, we would probably advocate for swapping it out for a Continental,” Doug said.

Athol Orange didn’t have any trouble adding a taildragger to its insurance policy, particularly since the club has been operating taildraggers for its entire 81-year history. And with a low hull value, it is less expensive to insure. However, many insurance companies require 10 hours of dual in the aircraft.

Even if they did offer tailwheel training, Doug doesn’t think the Taylorcraft is well suited for that task. “There are no brakes on the right side, so the instructor has no way to correct for anything – he’s got rudder pedals but he’s got no brakes,” Doug pointed out. “One of the things we’ve tossed around when the topic came up, if we ever allowed training, then we would probably do it in the Champ because the instructor has the ability to control what is going on. You don’t have that in the T-craft.”

Another point is the visibility is not quite as good as it is in the Champ. The seat in the T-craft is a sling arrangement. “It is just a frame and a canvas sling and they throw seat cushions on top of it,” Doug said. “It all works fine, but you tend to sit a little lower. The way you sit and the deck angle of the plane you’ve got pretty much no visibility forward in a three-point [landing], so you really have to do the Cub thing and lean out the side. Visibility is definitely an issue.” 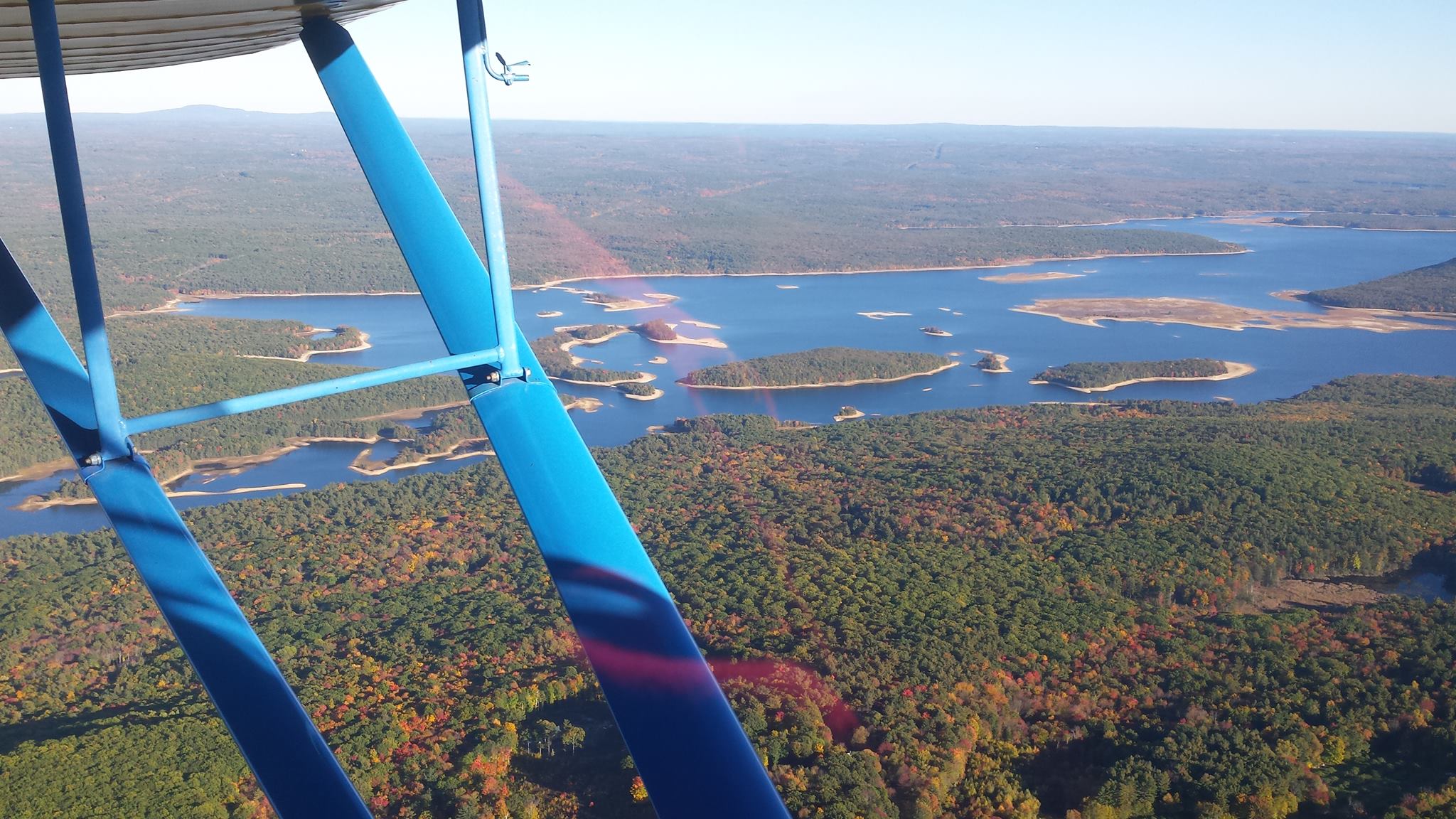 Otherwise flying the plane is simple. It harkens back to a simpler age of stick and rudder flying when pilots really felt the airplane. Without an electrical system, it provides the opportunity to learn how to hand prop an airplane—something most modern pilots probably have never done.

When you raise the possibility of taking the Taylorcraft on a cross-country, Doug just laughs. If you’re looking for an adventure and want to see the country low and slow, and don’t mind stopping every couple of hours, the Taylorcraft may be the perfect plane.

“You could certainly go to Oshkosh in it but you’d be doing it by yourself and you’d have very minimal supplies with you,” Doug said, “But you could do it.”

BL-65 has one 12-gallon header tank, which is about two-and-a-half hours of flying time and a useful load of 450 pounds, so it really is best suited for local flying.

“It is a blast,” Doug said. “It can be a lot of fun to fly because it will do exactly what you tell it.” And the Taylorcraft certainly gathers some attention when you go someplace, he noted. People are interested in hearing about it and talking about it. 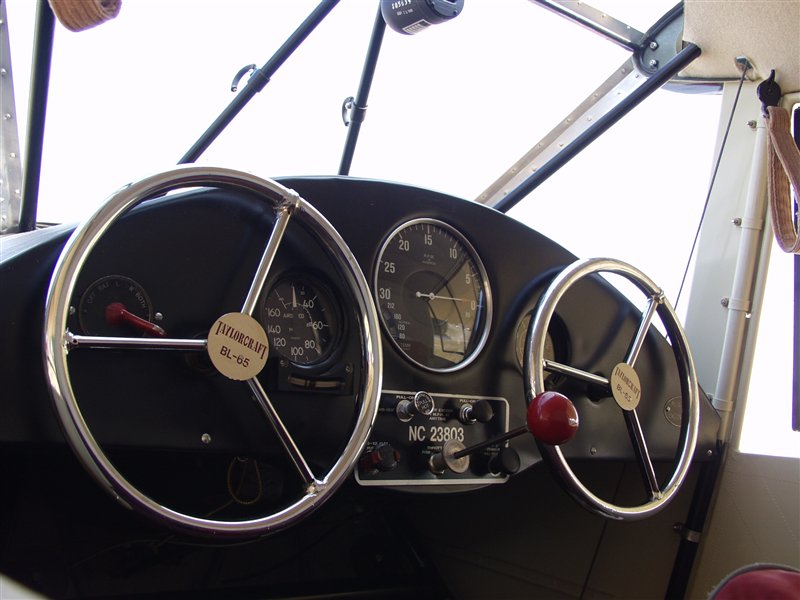 One of the allures of the Taylorcraft for Doug is flying something of that vintage and the minimalist nature of the plane. “I’m quite content with this gigantic four or five inch tach in front of me telling me what’s going on and just looking out the window,” Doug said. “It’s the overall experience of it. You’re watching cables move from inside the cockpit when you’re operating the controls. You’re looking at gauges that were produced before the start of WWII.”

And on top of that, Doug loves flying in an area that is rich with aviation that history. “Think about Western Massachusetts, the Granville brothers and everything that went on in Connecticut and Long Island, Amelia Earhart’s flights and the Hindenberg, and the Spirit of St. Louis. They all traversed this area,” Doug said. “So it’s a real time warp when you get in this thing. When you get in a plane of that vintage in the airspace that’s been traversed by so many people like that, you look out the window and it’s like it could be 1939 – other than the fact that I’ve got my cell phone in front of me with an aviation app up. That’s the only thing that’s out of place.”

An antique aircraft isn’t for everyone, particularly one you have to hand prop. But if you are looking to add something unique to your club that meets the Sport Pilot regulations at an extremely affordable price, not too mention a touch of romance and nostalgia, than the Taylorcraft is something to consider. It won’t take you anywhere fast and it won’t take you far, but it will take you back 70 years, and you’ll have a ton of fun. Unless you’ve flown an aircraft of this vintage, it’s hard to describe how much pleasure you get flying something so simple.