Flying Clubs Club Connector Newsletter Question of the Month: What Should I Expect as a Powered Pilot Learning to Fly a Glider?

Question of the Month: What Should I Expect As a Powered Pilot Learning to Fly a Glider?

Michael Hangartner, Manager of AOPA’s Flying Clubs Initiative, is a Private Pilot with ratings in single engine land airplanes and helicopters.  Lately, he has been accumulating time in gliders in pursuit of a glider add-on rating.  Here, he offers thoughts on the transition to nonpowered flight, and advice for other powered pilots who have an interest in learning to soar. 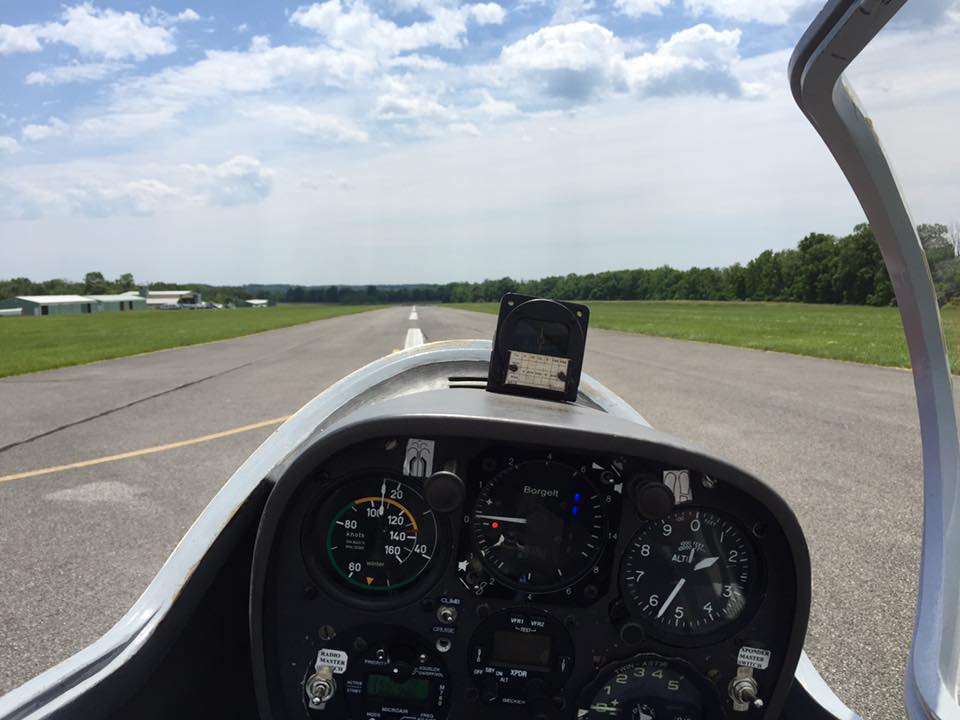 Do You Have Soaring Ambitions?

Are you a powered pilot looking for a new, challenging way to experience aviation?  If so, you might want to consider soaring—a singular experience that is entirely unlike other forms of flight.  There are many reasons why an aviator who currently holds a certificate in one of aviation’s powered forms might want to take up gliding.  First, there is a beauty and a simplicity in soaring that—in the eyes of this aviator—is unparalleled.  Unlike virtually all powered aircraft that aren’t fighter jets, gliders have canopies that afford their pilots expansive, uninterrupted views of both the landscape below and the skies above.  Glider controls and instrumentation are basic (which comes from being unencumbered by an engine), and the only sound present in the cockpit is that of the wind.

There are other reasons to soar as well.  Learning to fly a glider will help even experienced powered pilots hone their stick-and-rudder abilities—skills that translate to all forms of flight.  Many aspects of glider flight are likely to make powered aviators safer, more proficient pilots.  These aspects are the focus of this month’s Safety article.

In addition to the skills that one can learn flying a glider and the sheer fun that can be had learning them, another reason to soar lies in the fact it is a truly economical way to enjoy aviation.  This is especially true within a club setting, where costs are shared.  If the thought of gliding appeals to you, your next question might be how to go about getting into it.  Prior to booking your first flight, there are some things you will want to consider.

If you think you might want to try your hand (and feet) at gliding, there are a couple of decisions you will likely want to make very early on.  First, in what kind of setting do you want to learn: at a club or at a commercial flight school?  In the world of soaring, learning to fly within a club is a common path, and can be a great way to experience all the elements of the sport by interacting with other club members and performing different tasks during gliding days.  Clubs also offer natural mentorship opportunities—opportunities that can greatly enhance the training experience.

While learning to glide in a club setting has its advantages, there can also be downsides.  If you are a pilot who prefers fast-paced training, it might be difficult to find within a flying club.  This is because as an equally-vested member of a club, your privileges are exactly those of the other members.  On days where conditions are ideal for soaring, there will almost certainly be periods of downtime as you wait your turn for either an aircraft or an instructor.

If you would prefer a more accelerated path of glider training, you might want to consider learning to fly at a commercial glider flight school.  At a flight school, you can book time much as you would in a powered aircraft, and your training will be the instructor’s priority.  In this context, it is possible to learn more quickly, and to earn a rating in fewer flights.  The biggest difficulty involved in doing glider training at a flight school will likely be finding a glider flight school nearby your location; in the world of soaring, commercial operations are far less prevalent than within the powered realm.  They do exist, however, and if you’re willing to travel and perhaps make a vacation out of learning to glide, they can represent an efficient way to train.

Another early decision you’ll want to make concerns the type of launch you want to learn initially.  There are three ways to launch a glider: aerotow, ground tow (auto or winch), and self-powered.  Each of these methods of launching requires a unique set of skills, and each requires a separate endorsement from a flight instructor in a pilot’s log book.  The type of launch you wish to learn will likely be a primary consideration in which school or club you choose for training.

Once you’ve chosen a prospective place to train, the next step is to book an initial flight.  This is an ideal way to decide both if gliding is something that you wish you pursue and if you think the location and instructor you’ve chosen will be a good fit for your learning style.  If you’re looking for a location at which to begin, the Soaring Society of American (SSA) provides a helpful online resource identifying places to train across the country.

Like your initial flight in a powered aircraft, your introductory glider flight will likely begin with an explanation of how the aircraft should be preflighted, as well as basic procedures for ground handling.  Next, you will sit in the cockpit to familiarize yourself with some of the differences between glider controls and those that you would find in an airplane.  Some of these differences are that there will be a stick instead of a yoke, and a lever to control the glider’s spoiler and/or airbrake.

One thing that will immediately stand out about the instrumentation is that it is minimal; the rows of gauges and knobs found in the panels of powered aircraft cockpits are replaced by only a few primary instruments in a glider.  The most prominent of these are two small pieces of yarn taped to the front of the canopy—a low tech heads-up display that allows a pilot to maintain coordinated flight, and probably the most affordable piece of instrumentation in the aviation world.  Another instrument that will be new to powered pilots is a variometer, which is essential for soaring.  It is a very sensitive rate of climb instrument that can tell a glider pilot how quickly the aircraft is climbing or descending.

Before long, it will be time to fly.  Your instructor will perform the takeoff, though—if you choose the aerotow method of launch—he might let you try maintaining position behind the tow plane as you gain altitude.  This is not an easy task, and my first attempts to maintain a correct tow position were humbling to say the least.  Once at altitude, you will release the tow rope and set out in search of thermals—rising columns of warm air that provide the lift necessary for the glider to gain altitude.

During the flight, you will have opportunities to try some basic maneuvers, and to begin to get a feel for the glider.  Perhaps the biggest initial difference you will experience is the amount of rudder that you will need to use in turns.  Figuring out how much rudder to use, and also how to time its use, was one of the earliest challenges I faced—my hours of powered time had done little to prepare me as I made my first tentative efforts to turn in a coordinated manner.  As with anything in flight, however, your skill will improve with practice.

There will be a lot to take in on your initial flight.  Everything that your instructor covers during its course will be repeated on subsequent flights should you decide to continue training, so don't feel overwhelmed.  And remember to have fun!

So you’ve taken an introductory flight, and you decide that you want to pursue glider training.  What will it entail?  Assuming that you are a heavier-than-air aircraft pilot with at least 40 hours of flight time, FAR 61.109 states that you must log at least 3 hours of flight time in a glider, which will include 10 solo flights and 3 training flights with an instructor in preparation for the practical test prior to earning your rating.  The actual amount of flight time that is necessary will vary from pilot to pilot.  If you are a private pilot pursuing an add-on rating, a written test will not be required.

During your training, you will get a feel for the aircraft, which—with its light weight—you will find is a highly maneuverable machine.  You will learn the importance of energy management, and gain an appreciation for angles and airspeeds as you begin to take flights farther from the airport.  You will learn to read weather patterns more intricately than you might have before, and develop a keen eye for identifying potential sources of lift.  You will also become adept at using new controls, such as the spoiler, to manage your approaches to land (often in conjunction with slips more aggressive than you may be used to).  Eventually, you will progress to a point where your instructor is ready to sign you off for your check ride.

Earning a glider rating is an exciting accomplishment, and it is only the beginning.  After passing your check ride and becoming a newly certificated glider pilot, you will discover you still have a tremendous amount to learn about soaring techniques.  That's the great thing about gliding: the challenges never end, and neither does the fun.  Whether you just want to take a few glider flights to try something new or you are looking to add the glider category to your current certificate, here's wishing you happy soaring!