Flying Clubs Club Connector Newsletter Club Spotlight: Cleveland Soaring Society is as Much a Social Club as a Flying Club

Club Spotlight: Cleveland Soaring Society is as Much a Social Club as a Flying Club

You’re interested in flying and looking for a way to do so that is affordable, fun, and social. Naturally, flying clubs come to mind. But have you considered joining a soaring club?

It meets all three criteria and there are clubs throughout the country. In fact, a search of the AOPA Club Finder shows 116 soaring operations in the United States, and the Soaring Society of America (SSA) web site has a map with 140 locations to soar in the U.S. and a list of 180 commercial operations.

One such club is the Cleveland Soaring Society (CSS). Founded in 1962, the club operates five gliders and one tow plane from Geauga County Airport (7G8) in Middlefield, Ohio, which is about an hour drive east of Cleveland. Like most flying clubs, it started with a few people interested in started a club and some meetings.

One of the charter members, Pat Hange, operated a grass strip in Lenox, Ohio with Harriet Hamilton. They owned a Schweizer 2-22 glider and a J-3 Cub with an 85-hp engine. When the women moved their operation to Florida, 12 members bought a used Schweizer 1-26, single-place glider, and another group of 14 bought a new K7, two-place training glider. Unfortunately it wasn’t long before that aircraft had an incident and the K7 group disbanded. 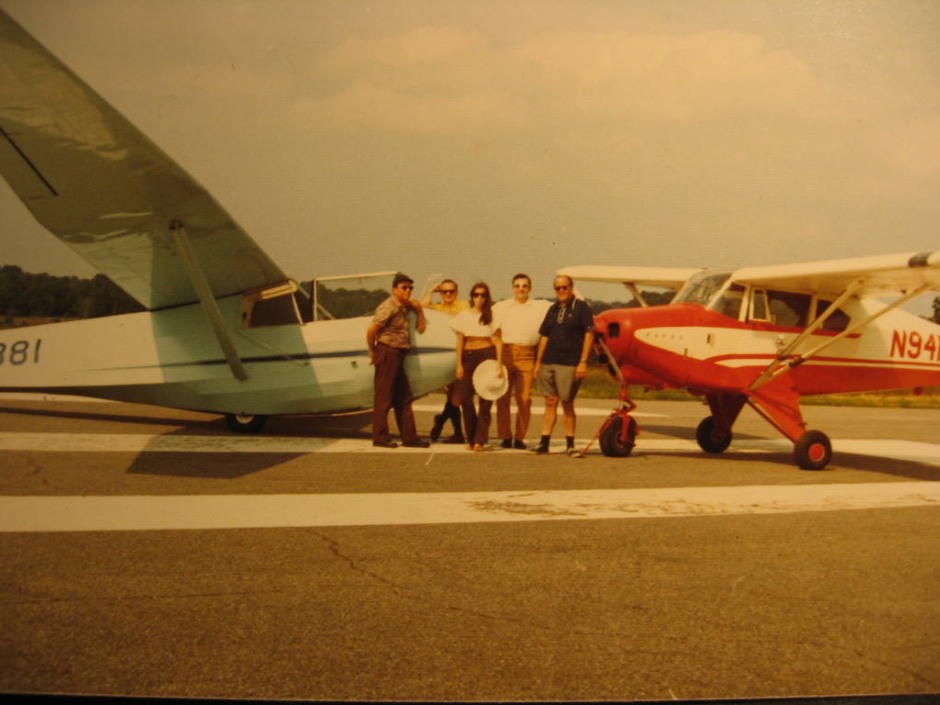 Today, CSS operates a Bellanca Scout as their tow plane, and a variety of glider types – a single-seat Schweizer 1-26; the three-seat Schweizer 2-32; the two-seat Grob 103, and two Pilatus B-4s, which have one seat.

Over the years, the initial group of 12 has grown to 28 members today. One of the challenges has been finding and keeping a home base. The Cleveland Soaring Society has called about a half dozen airports home over its 56 years. One of the challenges gliding clubs face is finding the right airport – it’s helpful to operate where there are wide runways and not too much powered aircraft traffic. As with any club that relocates, the Cleveland Soaring Society lost some members with each move and gained others.

Members range in age from 14, the minimum age to solo a glider, to 70. “You run the gamut,” Club Secretary David Nuss said. “Probably half are powered pilots, and you’ve got some people that fly nothing but gliders.” Among the members are a retired 747 captain, a current 737 captain and a former WWII Luftwaffe pilot (who has since passed away). David owns and flies a Taylorcraft.

David said members generally fall into two categories – “the youngsters that are probably going to be around airplanes all their life and the people that their kids are finally in college and they have some time and some money to spend on something that they have always wanted to try and do.”

One of the big attractions to soaring clubs is the affordability. “As a club we try to keep our costs as low as possible,” David said. The Cleveland Soaring Society charges annual dues that are prorated by month rather than monthly dues because it is easier for bookkeeping.

Membership is $700 a year, which is reduced by $100 each month if you join later in the year. The soaring season in Ohio is generally from May through October, and members who join in June pay $600, in July $500, and so on down to $200 for members joining in October.

The annual dues cover the fixed costs such as hangar rental, insurance and annuals. The tow fees cover the operating costs of the tow plane and an engine fund. “The $40 tow to 3,000 feet just about covers our expenses to keep the Scout in the air,” David said. Members are not charged for aircraft time.

Annuals for the gliders are about $150 to $200, depending on the aircraft. The club does much of it’s own maintenance, which helps keep costs low. The biggest costs for most soaring clubs are the acquisition costs for a glider, and the cost of acquiring and maintaining tow planes. 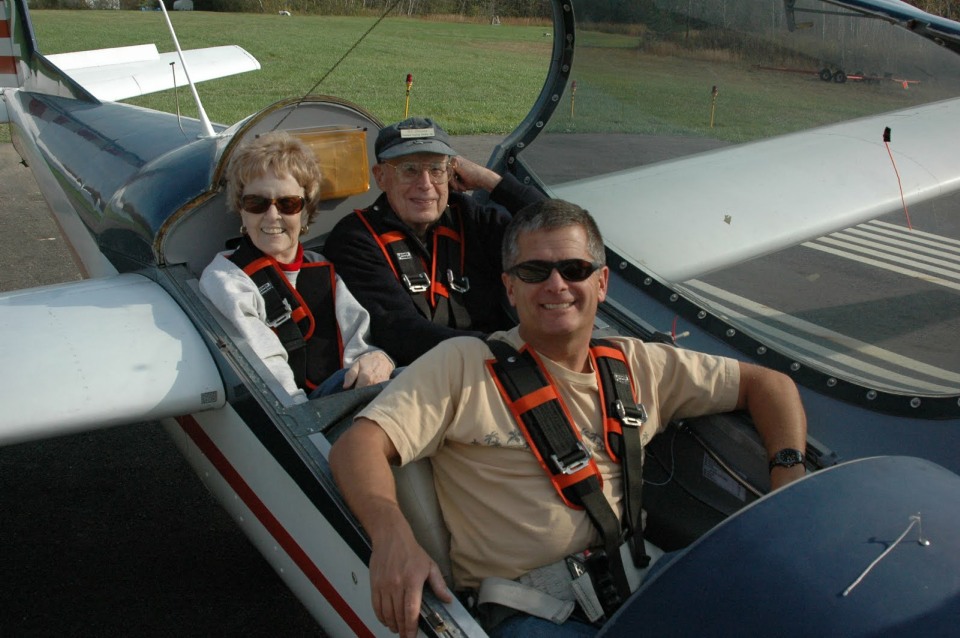 As for when the club flies, it all depends on the weather.  “Soaring conditions don’t really start until 1 or 1:30 in the afternoon, around midday,” David said. “It takes a while for the air to get warmed up and the cumulus clouds to start to show you where the lift is around here.”

As much as powered clubs are known for camaraderie and the social aspect, soaring clubs by their very nature have to be social. In order to fly a glider, you need a tow pilot and it helps to have a few people assisting on the ground – whether it’s attaching to tow cable or walking the wing.

“The thing about glider clubs, it’s more of a social club or as much a social club as it is a flying club because you can’t take off by yourself,” David said. “You need at the very least a tow pilot to operate the Scout, and take-off ground handling – it sure helps if you have a wing runner. So it helps to have two more people if you’re going to fly a glider.” 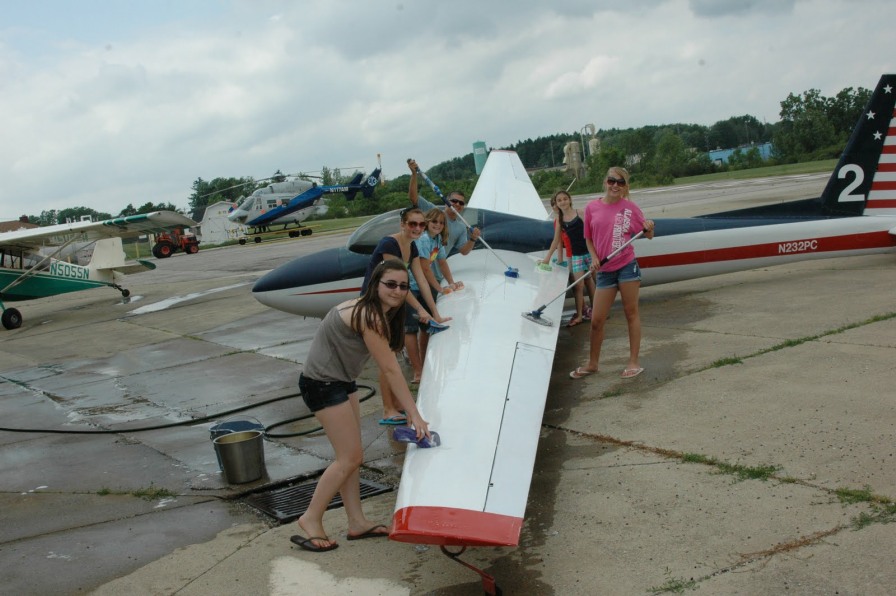 He also noted that on a busy day, a member might not get a chance to get in the cockpit, even if they are on the list to fly. “You might be tenth on the list and there are only eight flights that day,” David said. “So you help launch, you help bring gliders back. We have golf carts we use for ground operations to tow the gliders around on the ground.”

With members generally around all day helping with operations provides an opportunity to build camaraderie and share flying stories and experiences. “About four or five years ago, one of our members who was a WWII pilot—he was a bad guy, he flew Messerschmitts,” David said. “He was a glider pilot and he was sitting at the picnic table and was talking with one of our students who had flown nothing but gliders and you could see their hands moving and they were talking about flying, making gestures with their hands. This 14-year-old girl was connecting with this 90-year-old guy who had a heavy accent and it was just the connection of the shared experience in the glider. Seeing that was so cool.”

Student pilots must be 14 years old to solo and the SSA says it generally takes 30 to 40 flights with an FAA-Certified Flight Instructor for Gliders (CFIG) for most students to solo, which is about 10 to 12 hours of flight time. 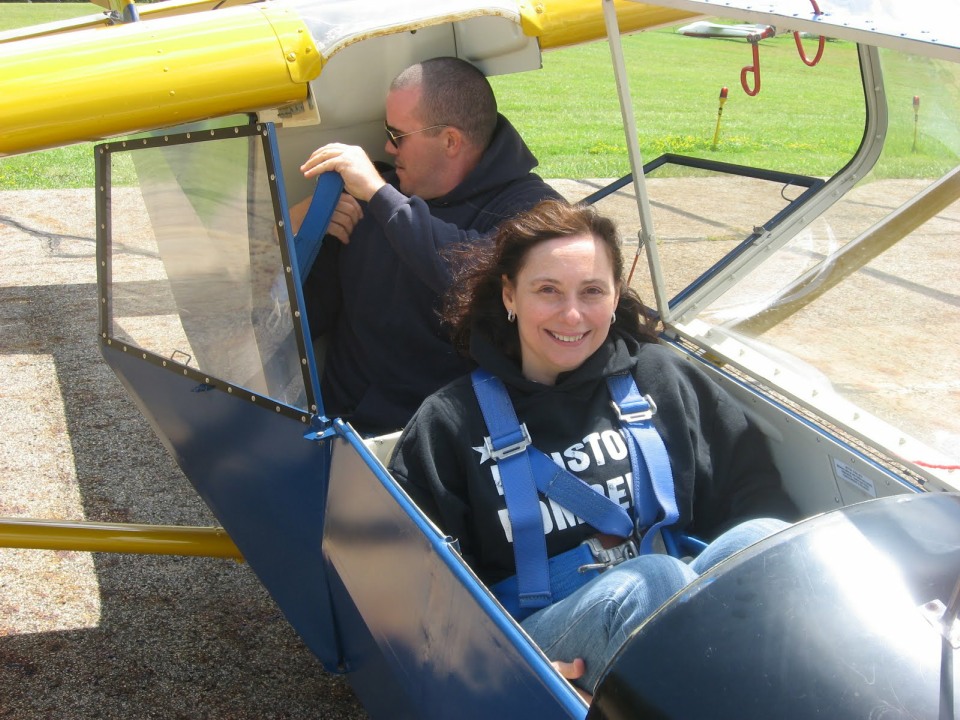 To earn a Private Pilot-Glider certificate, you have to be at least 16 years old; logged at least 10 hours of flight time in a glider and at least 20 total glider flights, have 2 hours of solo time in a glider, and pass the FAA written examination and flight exam.

A pilot with a powered license can add a glider rating if they have 40 hours PIC, and a minimum of 10 solo glider flights before they may take the glider flight test. No written exam is required.

Some clubs struggle to have CFIGs, but CSS is fortunate to have four members who are instructors that are available for training. A bigger challenge is finding qualified tow pilots. David said the hardest part is finding tailwheel pilots. Most insurance companies require tow pilots to have at least 100 hours of tailwheel time, although CSS is fortunate that its insurance carrier does not have that requirement, only that the tow pilot has been deemed qualified.

For anyone interested in flying – whether they are new to aviation or already have a pilot certificate, soaring clubs offer an inexpensive way to fly and share in the joy and camaraderie of aviation. The experience is totally different from powered flight and a whole lot of fun. 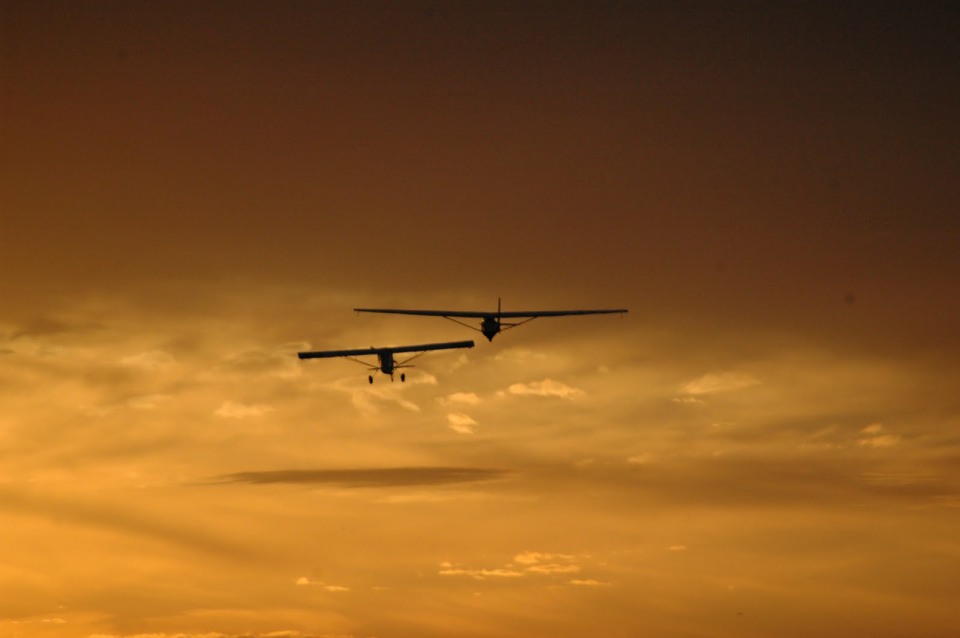