Safety: Help your club members learn from others’ mistakes 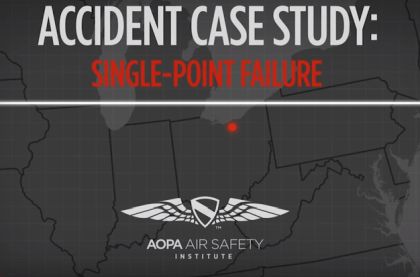 It sometimes takes an accident to raise our awareness of how an emergency can develop and affect us. For example, what if you were flying a club aircraft and had a vacuum pump failure on a sunny day? It’s no big deal, but in instrument meteorological conditions—and especially without backup instrumentation—it's a serious emergency that can turn catastrophic. The new AOPA Air Safety Institute Accident Case Study: Single Point Failure examines such a catastrophe to help pilots learn from mistakes made—and make better decisions as a result.

The May 3, 2016, flight was on an instrument flight plan en route from South Carolina to Connecticut. It concluded a long weekend getaway for the Bonanza pilot and his two friends. Shortly after 3 p.m.—about two hours into the flight—the pilot, flying above an overcast south of Long Island, contacted New York TRACON with a troubling report: His aircraft had lost its only vacuum pump, and without a backup system, he was now forced to fly partial panel.

Although the pilot realized the importance of staying in visual meteorological conditions, he did not effectively inform air traffic control of the dire situation. Look at this transcript passage when the controller asked if the flight needed any assistance: ATC, “November 440H, New York. I understand you're an emergency. Can you tell me the emergency, nature of the emergency, and do you require any assistance?” November 440H, “We're, ah, partial panel sir. We're fine. We're VFR over the top right now, and we're…just want to make sure that we don't have a whole bunch of, uh, time in the clouds, partial panel to get down below the clouds.”

With widespread instrument conditions blanketing the destination and alternate airports, the situation was deteriorating rapidly—the minutes and seconds just ticking away—to that final point when the aircraft became uncontrollable.

How could this accident have been prevented and what can your club members learn? ASI’s study reviews the flight and the pilot’s decision-making process, including actions the pilot should have taken before he was forced to deal with an impossible dilemma in instrument meteorological conditions.

As pilots and club members, we want to enjoy every flight, improve our skills, and share the fun of flight with others. But we should also take a moment and think of how we can be better prepared for each flight before we hop into the cockpit. Please share the video with your club members, or make it the topic of your next safety meeting, so they too can learn from the mistakes that were made on this flight.

On the topic of learning from others' mistakes, the Air Safety Institute has just introduced a new Accident Analysis web page that allows you to drill into many accident causes, and to see graphs depicting various types of accident, as well as a map that shows the locations of different categories of accident.  Check this out at: www.aopa.org/training-and-safety/air-safety-institute/accident-analysis