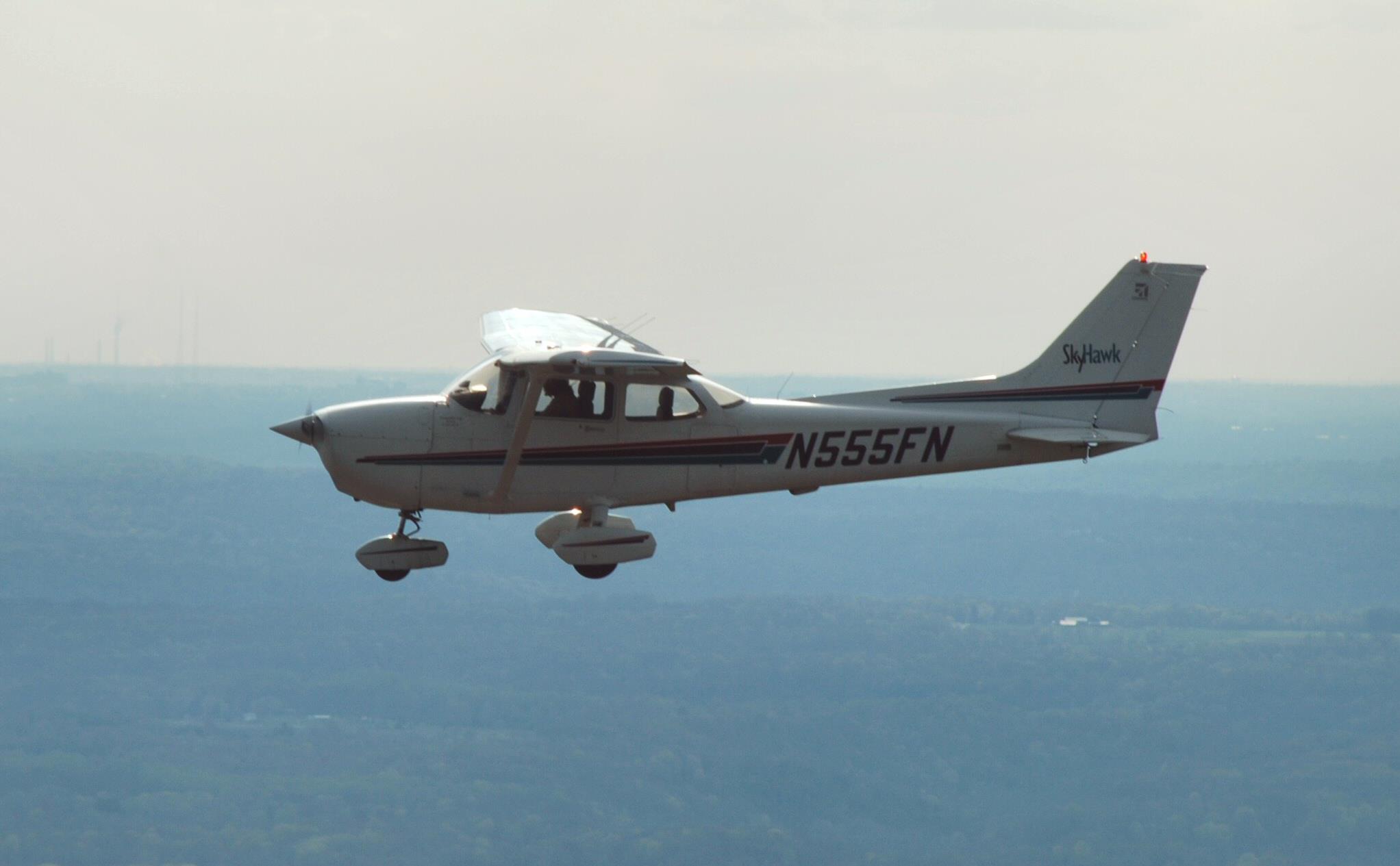 One of the benefits of being part of a flying club is the camaraderie and community that members develop. Every club has its own mission, purpose and culture.

Pilots fly for a variety of reasons – personal travel, business, the joy of being in the air, or as Antoine St. Exupery wrote, “because it releases my mind from the tyranny of petty things.” 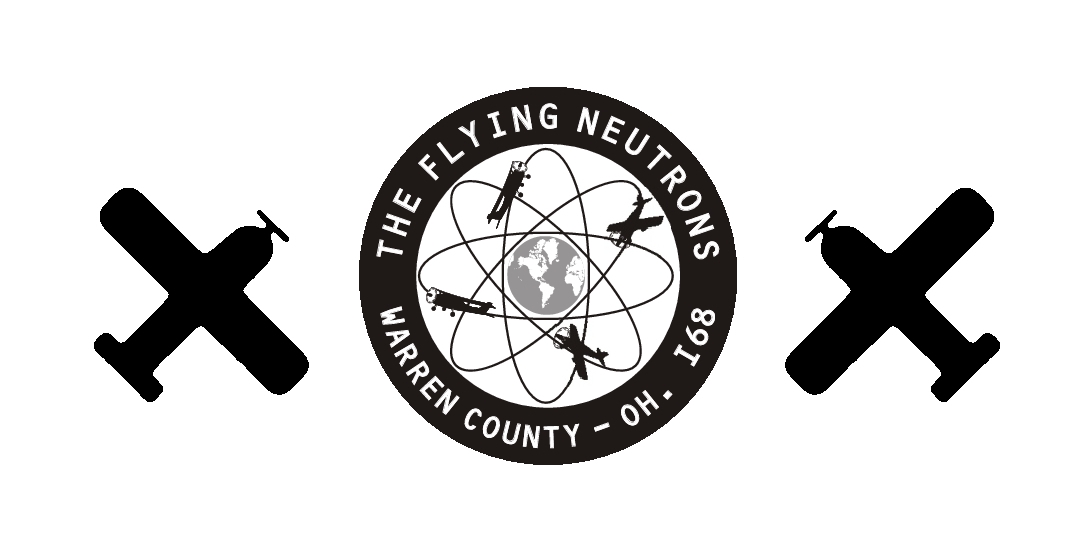 Many members of the Flying Neutrons Flying Club based at Warren County Airport (I68) in Lebanon, Ohio, fly for another reason as well – to serve their community. It’s part of who they are – as individual pilots and as an organization.

Individual members fly for a variety of organizations, such as Angel Flight and Pilots for Christ, that transport patients to facilities for medical treatment that they otherwise would not have been able to get to. Several members fly with the Civil Air Patrol (CAP), and others participate in Pilots N Paws, flying rescue dogs from kill shelters to shelters that can find the dogs forever homes.

As a club, the Flying Neutrons participate in two programs offering free rides – one is an annual event with the Otterbein Retirement Community and the other is the club’s First Flight program in which they take young people ages 12 to 21 for their first airplane ride. 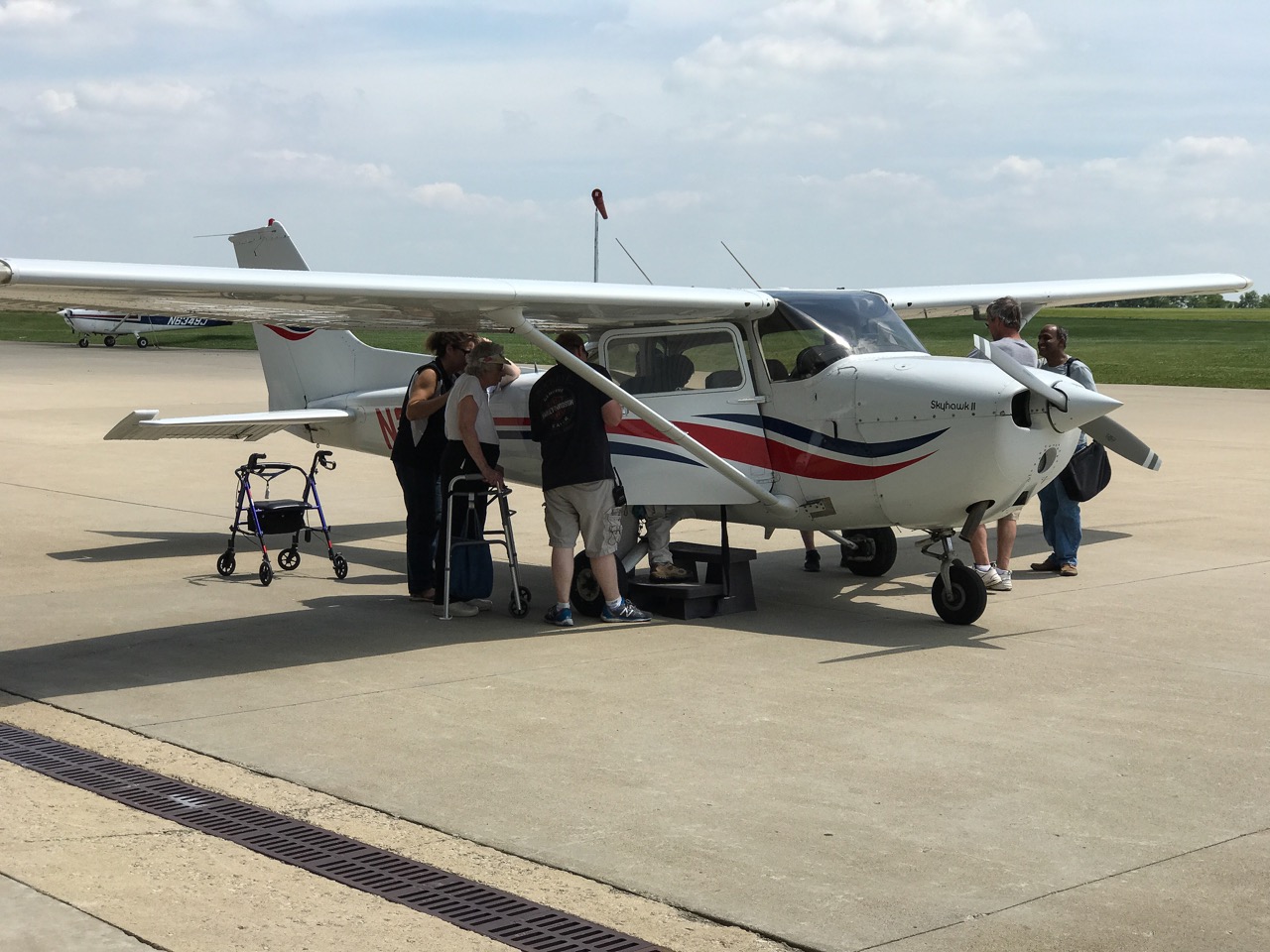 The club’s monthly meetings usually start with a barbeque, giving members time to socialize and enjoy each other’s company. Before the formal meeting begins groups such as the Civil Air Patrol, Angel Flight, and Pilots for Christ can speak about their organizations. “We always have an opportunity before our meeting to invite organizations to come in so all the club members can hear about it,” Jack said. “Usually each one comes in at least once a year.”

That’s how Club President Paul Johnson joined the CAP – another club member, Jeff Glover, gave a talk and Paul thought, “That would be a reason to fly. You can only do so many $100 hamburgers because A) You’ll run out of money and B) You’ll run out of available weight in your plane with too many of those,” he joked.

The CAP has three main focuses – emergency services, such as search and rescue, the Cadet program that brings young people into aviation and teaches life skills, and aerospace education. Each flight mission has three crew members – a pilot, an observer who serves as navigator and communicates with the mission base, and a scanner who is looking for the missing plane or may serve as a photographer on photo missions. 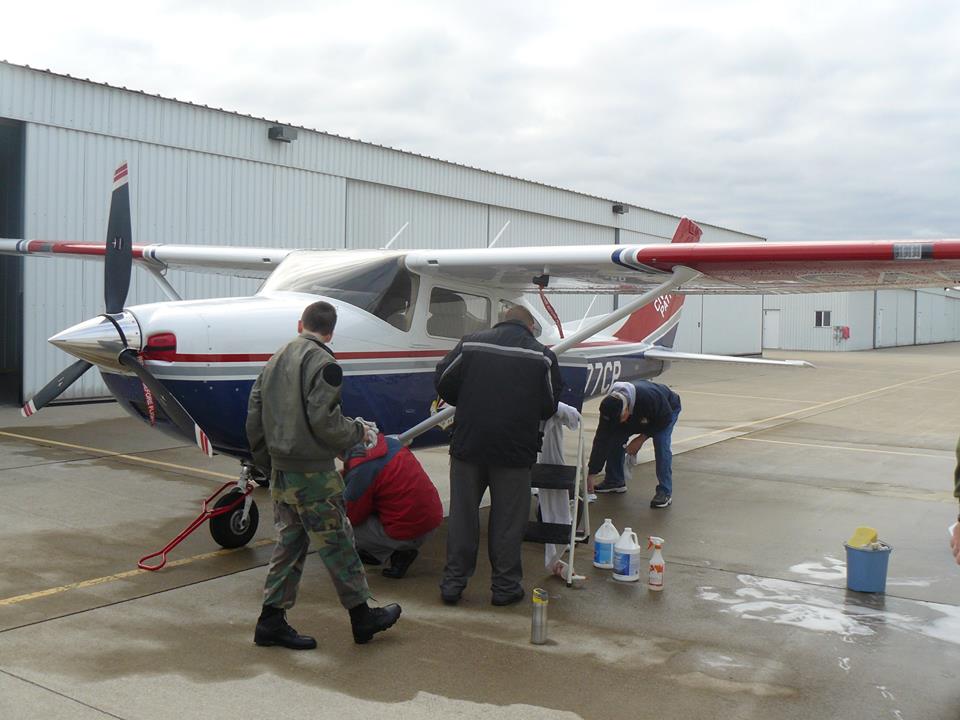 What Paul likes most is “the give back. You get to do some really interesting things.” His unit has served as the target to train fighter pilots how to intercept GA aircraft, there are missions in which the CAP will serve as a chase plane for military drones, which must be kept within line of sight from the surface to an altitude of 10,000 feet, and Paul’s unit flew photo missions to document the devastation in the northeast after Hurricane Sandy.

“There aren’t a lot of ways to personally help out in that kind of disaster from here,” Paul said. “You can give money, you can collect things, but in terms of being personally involved, your opportunities are a little lower. And here I have one. It gives you so many opportunities to give back in ways that you otherwise couldn’t.”

Several members fly club aircraft for medical missions with either Angel Flight or Pilots for Christ. Typical missions are within 300 miles and many of the patients are children getting treatment at Shriner’s burn center in Cincinnati.

Tony Smith has been a member of Flying Neutrons for about 15 years and flying for Angel Flight most of that time. He flies between 10 and 20 missions a year. Early on he flew the C-172, and once the club added a C-182, he starting using that as his primary aircraft since it is bigger and faster.

One of the things that demonstrates the camaraderie in the club is how supportive members are of those flying charitable flights. “If there is a scheduling conflict, I can call the member and ask to switch aircraft,” Tony said. “They’re great guys and they’ll help you any way they can.”

He often flies with his friend Jim and pilots pay for 100 percent of the costs of the flight. Over the years Tony has gotten to know some of the patients – there was a girl who was severely burned and missing three of her four limbs. He flew with her family from Asheville, North Carolina, to Shriner’s in Cincinnati on several flights spanning about 10 years. The last time he flew her she was in high school and her mom showed Tony a photo of her – she was the prom queen and the captain of the football was her date. Seeing how well she is doing, working with the kids and making them laugh and having fun with them is Tony’s favorite part. 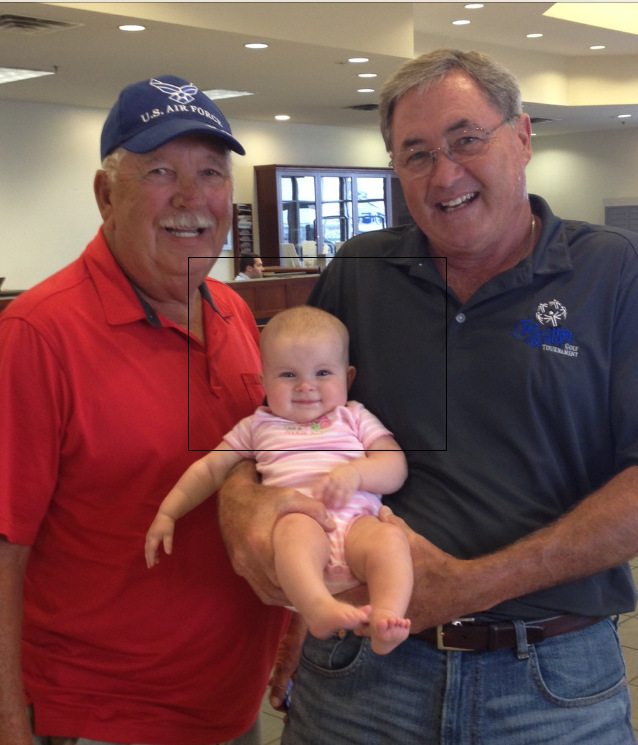 The bonds the pilots form are deep, as is their commitment to transport the patients. Tony has flown a baby named Shelby from Knoxville, Tennessee to Columbus, Ohio a few times. On one occasion the weather was terrible and he couldn’t fly. So he and Jim drive from Cincinnati to Knoxville to take Shelby and her mom to the appointment in Columbus and back. The total trip was 744 miles.

Dick White has shown a similar commitment as a pilot and flight coordinator with the local Pilots for Christ chapter. They do medical flights and missionary flights, and while it is a faith-based organization in which the pilots and passengers typically share similar values, it is non-denominational. There are no costs to the passengers, however, Pilots for Christ pays 50 percent, and the two pilots each pay 25 percent. 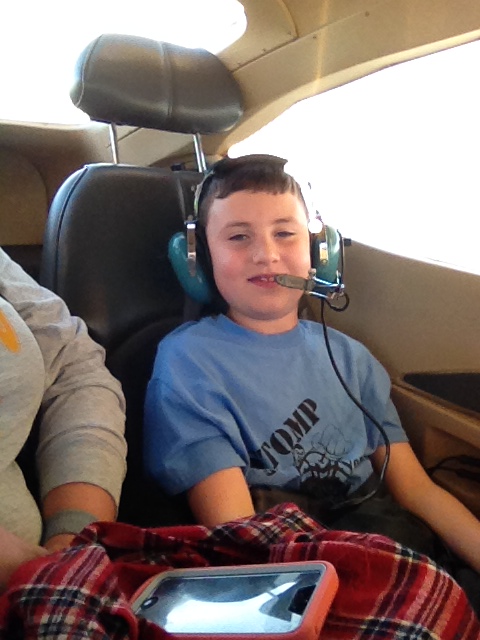 If the flight is too far to make in a single engine aircraft, the organization will pay for an airline ticket, which Dick did recently for a mother and her seven-year-old child who needed to fly to San Francisco for treatment. Many of the patients have had severe trauma. Dick flew a 10 year-old girl from Jacksonville, Florida who had been burned so severely her chin was fused to her chest, and on a flight from Missouri he transported a six-year-old boy who was burned over 60 percent of his body. “It’s a good humanitarian thing,” Dick said. “We pray for them before we take off.”

How it all relates to the club

Most charitable organizations require pilots to have a minimum number of hours as PIC – the CAP requires pilots to have 200 hours and Angel Flight has a 500-hour minimum. Many also require an instrument rating. Being in the club allows members access to instructors to work on advanced ratings and the opportunity to build time more economically.

Paul also noted that in the CAP, most of the planes in the fleet are 182s or equivalent and require a complex rating. “The beauty of belonging to the Flying Neutrons is it is as economical as one can get in aviation,” Paul said. “Our plane rates are lower than what you would be able to rent, and the club runs the hours on tach time. So you have a combination of lower rates and lower time, so you can do more flying.”

Although Jack didn’t think the club’s public benefit flying has attracted any new members, it is something a lot of the members are happy to do. “There is a lot of pride,” Jack said. “The people are so grateful. They are thrilled that you do this for them. You get a tremendous satisfaction that you’re able to help somebody like that. And it’s fun.” 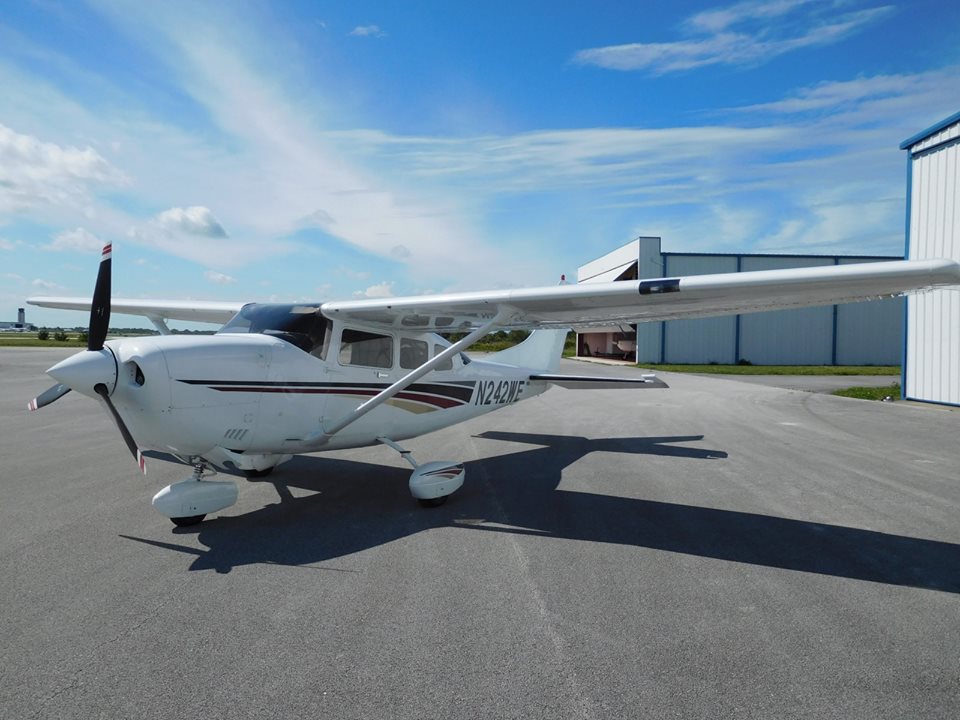 There are approximately 60 groups that use public benefit flying as part of their operations providing clubs with many opportunities to serve their communities in this way, whether it is a mercy flight, rescuing animals, doing environmental work, or flying for the CAP.

The Air Care Alliance (ACA) publishes an on-line directory of such groups. In addition, AOPA colleague Jim Moore provided details about many organizations that could use your help in his 2015 article “A Day to Serve.”

Whatever the charity and whatever the reason, charitable flying is something that can provide members with interesting flying opportunities while making a difference in the community. For the Flying Neutrons, it’s just part of the culture. “I don’t think we do a whole lot to make anything different,” Jack said. “It’s part of us. Period.”