Flying Clubs Club Connector Newsletter Event Spotlight: Was Flying 19 Hours to See the Eclipse Worth it? You Bet!

Event Spotlight: Was Flying 19 Hours to See the Eclipse Worth it? You Bet! 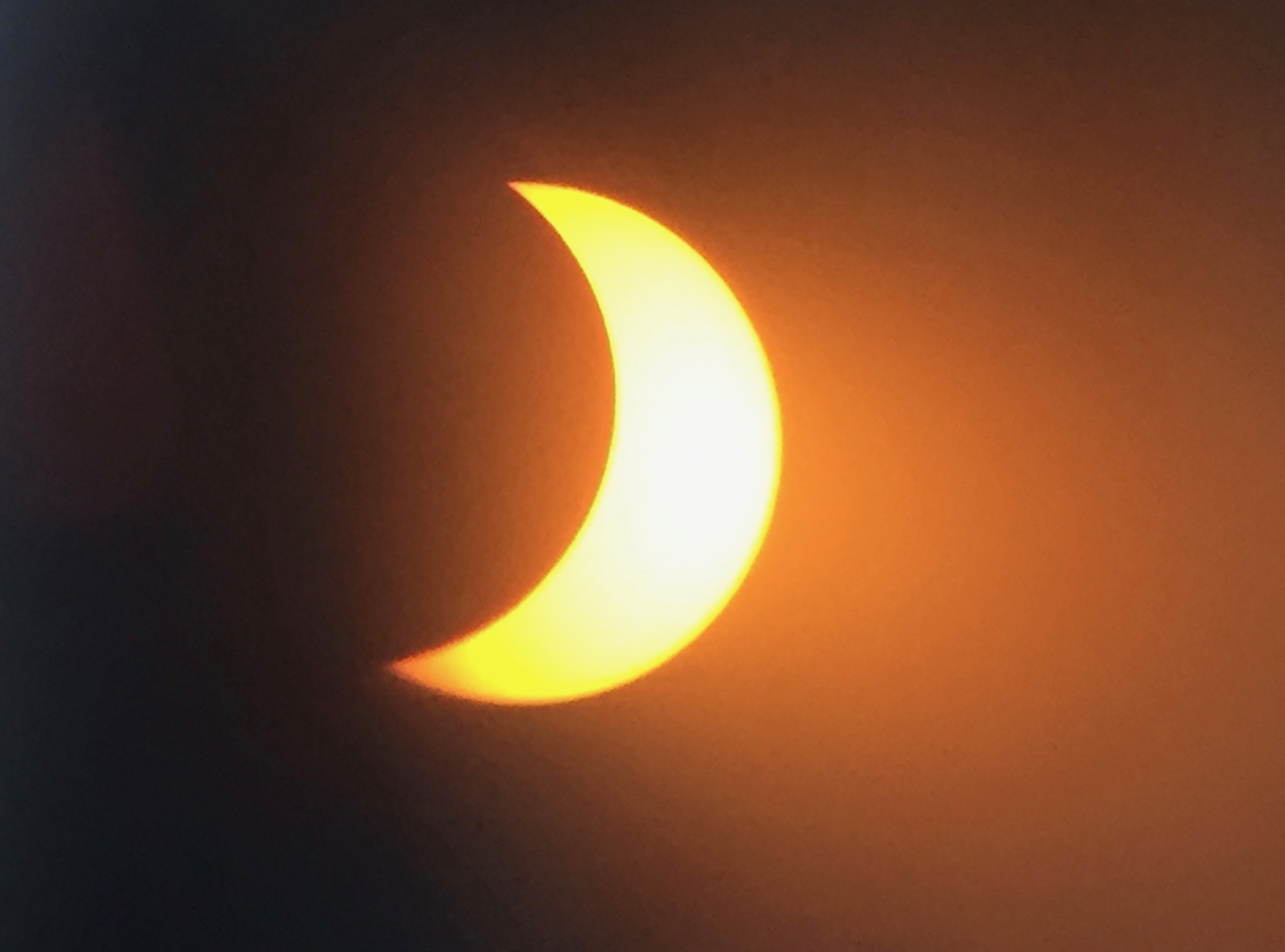 The total solar eclipse that traversed the United States on August 21 had most of the country staring up into the sky. For many flying club members, the celestial event gave them a reason to take to the sky.

Beaux Graham from the Fayette Regional Flying Club (3T5) in La Grange, TX, probably wins the prize for the most ambitious trip. He chose to go to Sullivan, Missouri in the club’s 1947 Aeronca Champ – a round trip that covered 1,290 nm and 19.3 hours of flying.

You would think a trip of that length would require a lot of planning – putting in for vacation time, booking a hotel, getting a pair of eclipse glasses. Beaux was a bit more spontaneous.

“I was toying with the idea of going to see it,” he said. “But it was sort of back burner. I was listening to the radio and they were talking about the eclipse and it got me really excited.” 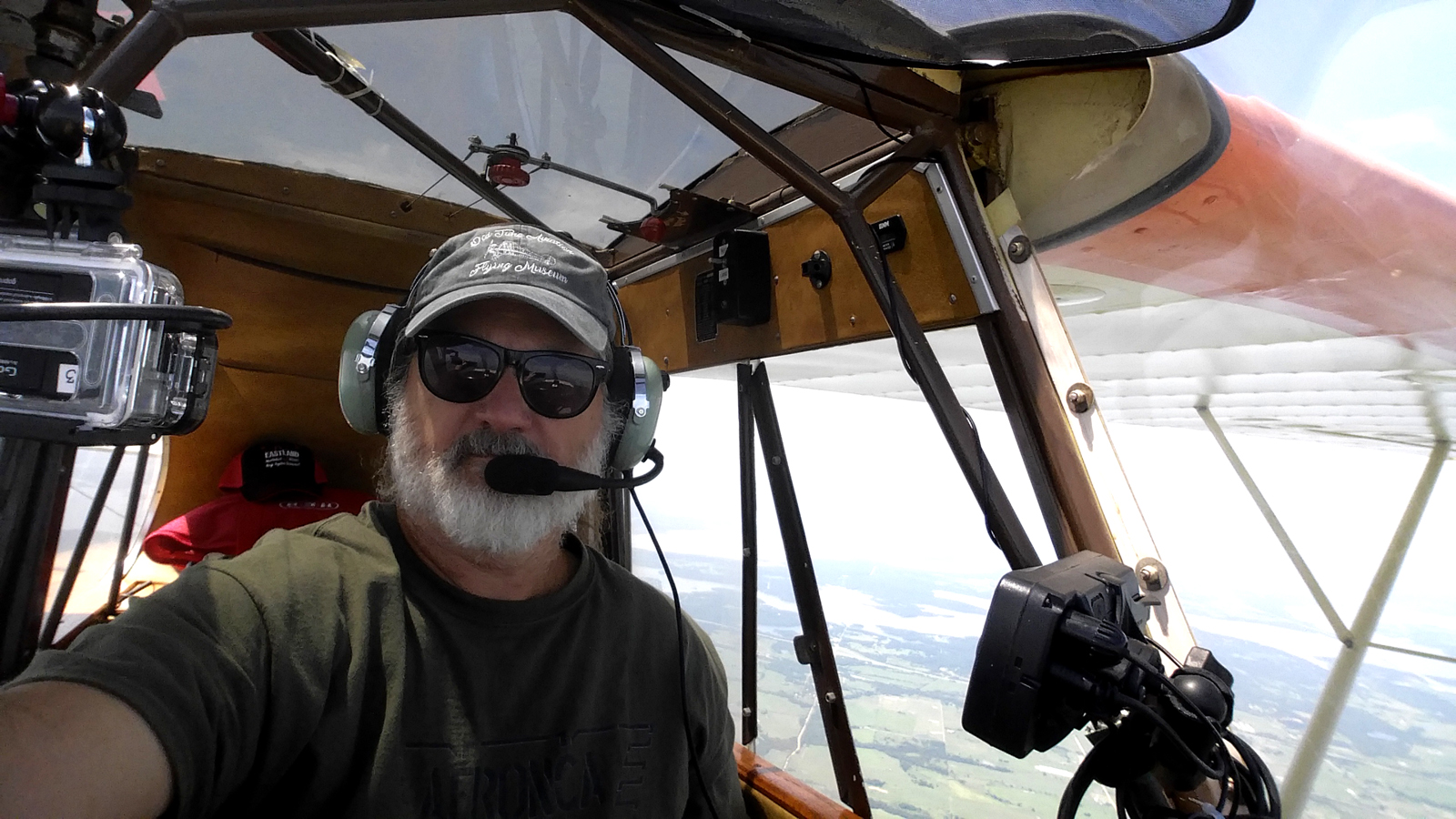 That was Thursday and the eclipse was happening on Monday. Beaux found a web site that showed the path of totality with the big stripe across the country and began planning.

“I started looking at towns and cross referencing through AirNav to see where the airport was, what kind of services were available there,” Beaux said. “I’d done a little flight planning on my AOPA flight planner and saw that going up to southern Missouri wasn’t that far away. Sullivan was right next to the centerline and it was far enough away from the big cities that I didn’t have to worry about traffic coming back.”

On Saturday he flew from La Grange (3T5) to Eastland, TX (KETN) to visit his mother and celebrate his uncle’s 80th birthday. On Sunday he set out for Houston, Missouri. It was just outside the zone of totality, has an airport a mile or so from town, and there were hotel rooms available at regular rates. It also has a friendly police department and a senior citizens shuttle, which Beaux would soon learn. 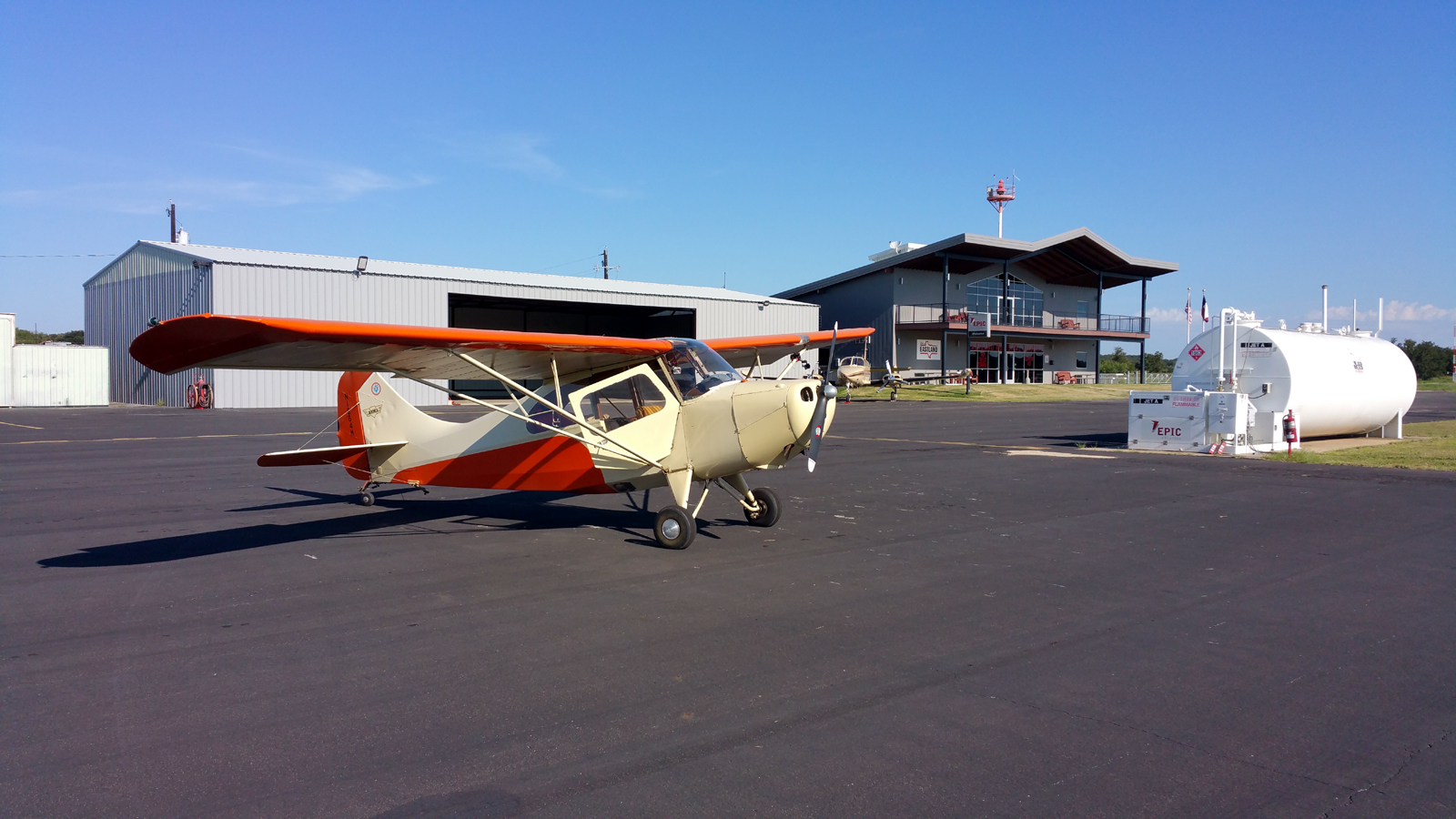 He made fuel stops in Ardmore, OK (1F0) and Rogers, AR (KROG) – where he decided it might be a good time to book a room! “I actually didn’t make the reservation for the motel until I got to Arkansas when I knew I was an hour and a half out.”

Houston (M48) does not have self-service fuel pumps - you have to call the local police department. Since they had to come out to give Beaux fuel, he asked if they would give him a ride to the hotel, and they did.

“The next morning I called to see if I could get a ride back and they said no, but there is a senior citizen bus running around town and they’ll come by,” Beaux said. “I called the senior citizen center, they came and picked me up, I rode around town with the other folks for awhile and they dropped me off at the airport.” But not before making stops at Walmart, the grocery store and a few houses to pick people up.

“The airport is right at the edge of town, it was actually on their route. You couldn’t ask for better service,” he said.

When he arrived at Sullivan Regional Airport (KUUV), they had a tent and bleachers set up, eclipse glasses, and they were grilling sausages. About 50 planes flew in to watch the eclipse, including a Cessna Cardinal RG from the Chandelle Flying Club based at Austin-Bergstrom International Airport (KAUS) in Texas. 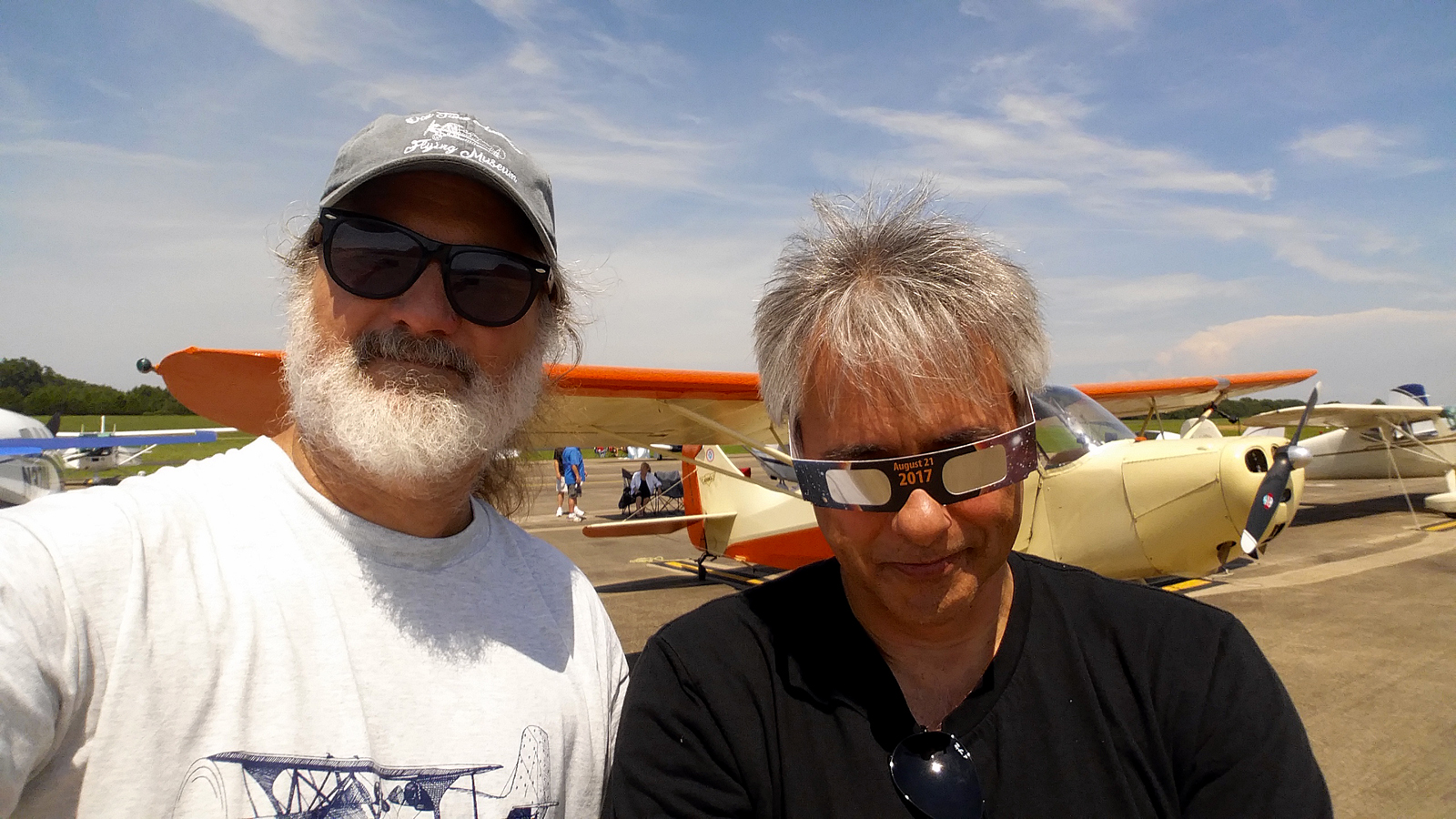 Beaux had been a member of Chandelle for 14 years and instrumental in the club acquiring that very Cardinal, but he left the club for the Fayette Regional Flying Club so he could fly the Champ. His friend Jim Butler flew the Cardinal to Sullivan to watch the eclipse, providing a nice surprise as neither had discussed viewing the eclipse in Missouri.

“It was like it was a black hole,” Beaux said describing the moment the moon covered the sun completely. “If you didn’t know this was happening and looked up, you’d say, ‘This is it. This is not going to end well.’ But it always does.”

“What was so great about it [was] hearing other people being excited about it all around, the crowd reaction,” Beaux said. “Hearing that experience with other people makes it sort of special. It makes it more exciting.”

Following the eclipse, the sky was full of aircraft heading home. “Right after I left Sullivan I tuned into ATC and they were unable, unable for flight following,” Beaux said adding, “That’s part of the joy of the Champ. 3,500 feet and just puttering along and no real reason to talk to them for flight following.”

Beaux’s return trip took him to Huntsville, AR (H34) – the highest airport in the state at 1,748-feet according to the airport sign that still had “Bill Clinton, Governor” written on it. From there he went to Commerce, TX (2F7) with head winds slowing his progress to about 55 knots knots ground speed – accounting for his longest leg, coming in at 3.5 hours. 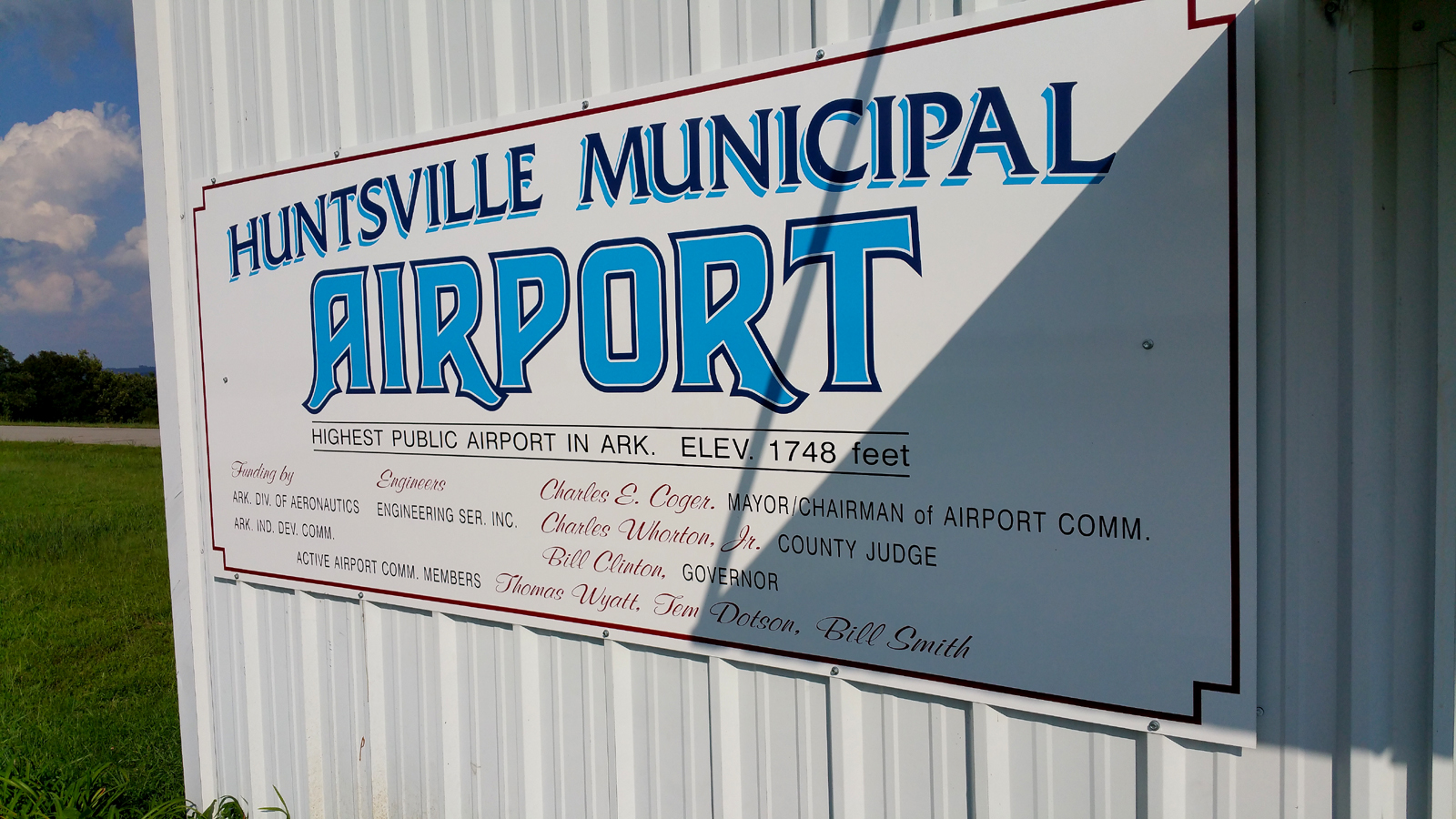 When asked why Beaux wanted to see the eclipse he said, “As a kid, watching Armstrong and Aldrin land on the moon, having an interest in science and technology, and just the opportunity to see an amazing celestial event.  But what really made it happen was having the ability to fly myself to and from the event and avoid the hassles inflicted on the folks restricted to ground transportation.”

South Carolina the preferred destination on the east coast

Beaux and Jim weren’t the only flying club members who took planes to see the eclipse. Four members of the Lehigh Valley Flying Club based at (KABE) flew the club’s Cessna C182 to Greenville Downtown Airport (KGMU) in South Carolina for a full day of flying and eclipse watching. The group shared flying responsibilities with each member flying left seat for one leg. They left around 5:15 am, made a fuel stop in Roanoke, VA (KROA), and arrived at about 10 in the morning. The group took an Uber downtown to watch the eclipse, and then headed home afterwards. After departing Greenville, they made a fuel stop in Charlottesville, VA (KCHO), dodged some weather and returned to Lehigh Valley Airport (KABE) around 10 pm. 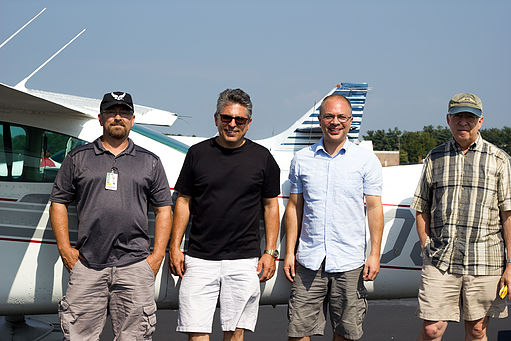 Like in Missouri, the airspace was crowded and Greer Approach would not issue IFR clearances or flight following. It wasn’t until they were talking with Potomac Approach that they were able to pick up an IFR flight plan.

I’m based at Alexandria Airport (N85), about 20 miles east of Allentown. I had flown almost the exact same route but landed a little north at Spartanburg Downtown Airport (KSPA) because that is where my sister was able to find a hotel. On the way home, I was behind the LVFC C182 as I heard them on ATC picking their way through weather after filing for an IFR flight plan in the air. As a VFR pilot, I diverted to Charlottesville, VA and spent the night.

Other east coast pilots descended on Triple Tree Airport (SC00), a private, 7,000-foot grass strip in Woodruff, SC. Approximately 800 aircraft, including one flown by AOPA Senior Director of Pilot Community Development, Les Smith, flew in to watch the heavens. Following the eclipse, Les said there was a steady flow of departures, leaving every 30 seconds or so, for four hours.

Events like the eclipse provide a wonderful opportunity for cross country flying with club aircraft and members. But there’s no reason club members can’t get together, pick a destination and have an adventure on any given weekend.