News from HQ: Fly-ins, Festivals, and Education – Fun on the East Coast

As featured in last month’s News from Headquarters, the You Can Fly team at AOPA comprises initiatives covering flying clubs, flight training, rusty pilots, the regional ambassadors, and the high school initiative.  We often comment on how wonderfully integrated these programs are – and we’re always delighted to see how these programs interact and cross over – especially at aviation events. Here are a few examples from October:

Another fantastic aviation event – and a wonderfully successful number three in our series of four fly-ins for 2017.  As attended and reported here by Les Smith, Senior Director of Pilot Community Development, the fly-in at Groton, Connecticut, had something for everyone: 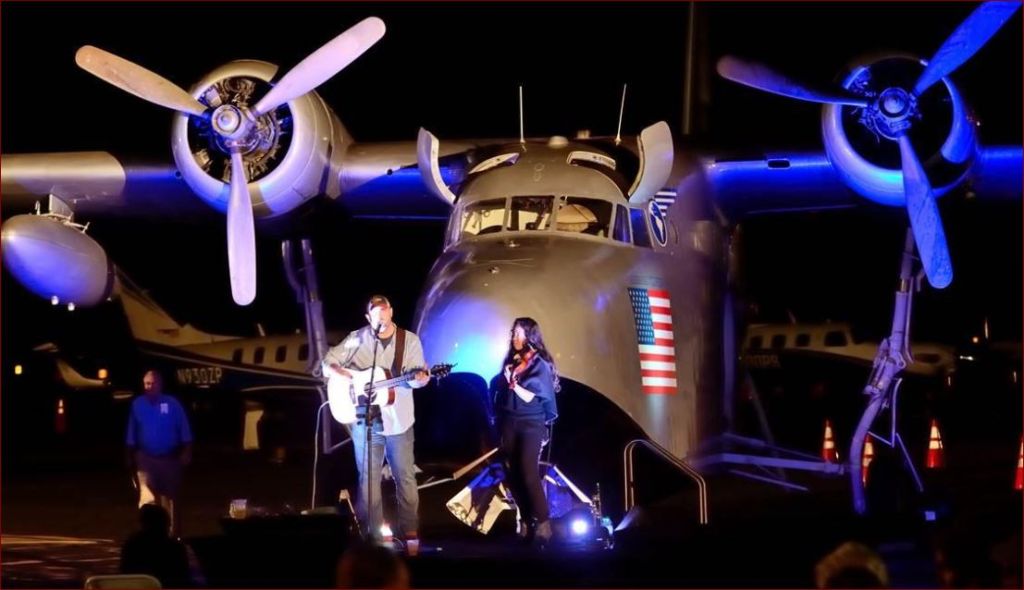 Saturday started with thick fog and the sound of a foghorn drifting in from the adjacent Pocquonnock River and Eastern Point Bay. This was to remind us of the nautical surroundings. As the fog lifted, a steady stream of arrivals began with 480 aircraft ultimately arriving for Saturday’s seminars, intriguing aircraft static display (including a C-47 that participated in D-Day) and capped by a Town Hall with Mark Baker.

With more than 6,300 attendees satisfied and heading home at the end of the day, AOPA staffers turned to the task of handing back the airport in better shape than when it was received. In the four years since AOPA switched from the national Summit to the Regional format, attendance has been more than 64,000, indicating the popularity of bringing the events closer to members.

A tip of the hat and profound thanks to all the local volunteers who help make these events possible! It’s hard work, but it’s been an absolute ball.

With a selection of speakers - including a Boeing 777 captain, an air force major, EAA and AOPA representatives, and a NASA astronaut - the 50 or so high school students and around six teachers enjoyed hearing about the many careers and opportunities in aviation.    Steve gave a presentation on the application of STEM (science, technology, engineering, and math) subjects to careers in aviation, which, judging from the interest and questions, was well received.

Following the presentations, high school students and teachers enjoyed getting upfront and personal with N163ME, an ex-RAF Vulcan pilot asked detailed questions about Rusty Pilots, and several teachers asked about flying clubs.   This is You Can Fly in action, and at its best! 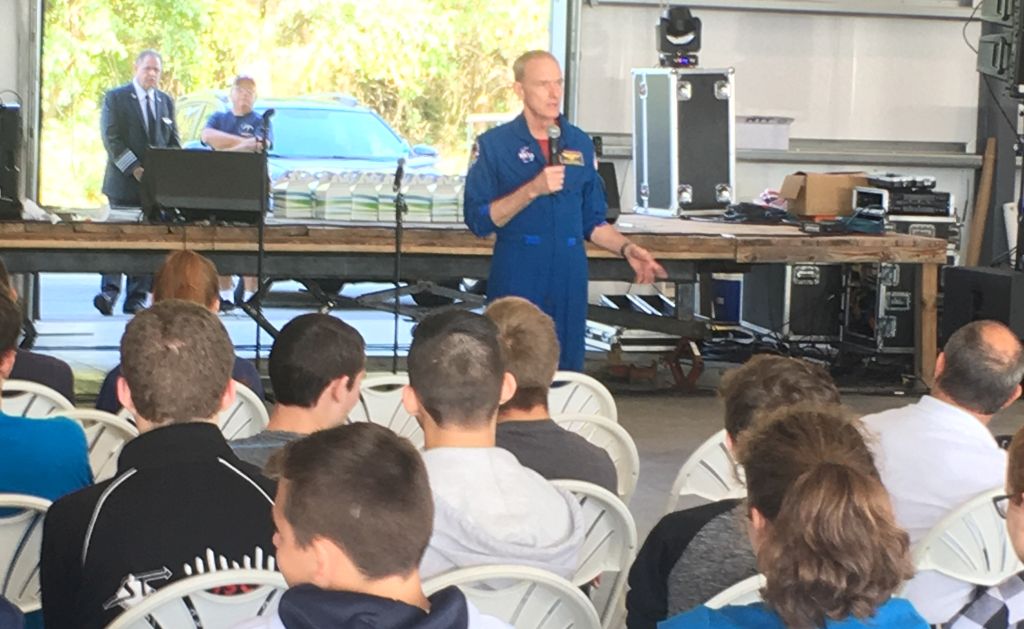 Also, it is not every day you get to make a new friend who was a space shuttle pilot – and not every day that a C172 makes friends with a beautiful B-25 Mitchell! 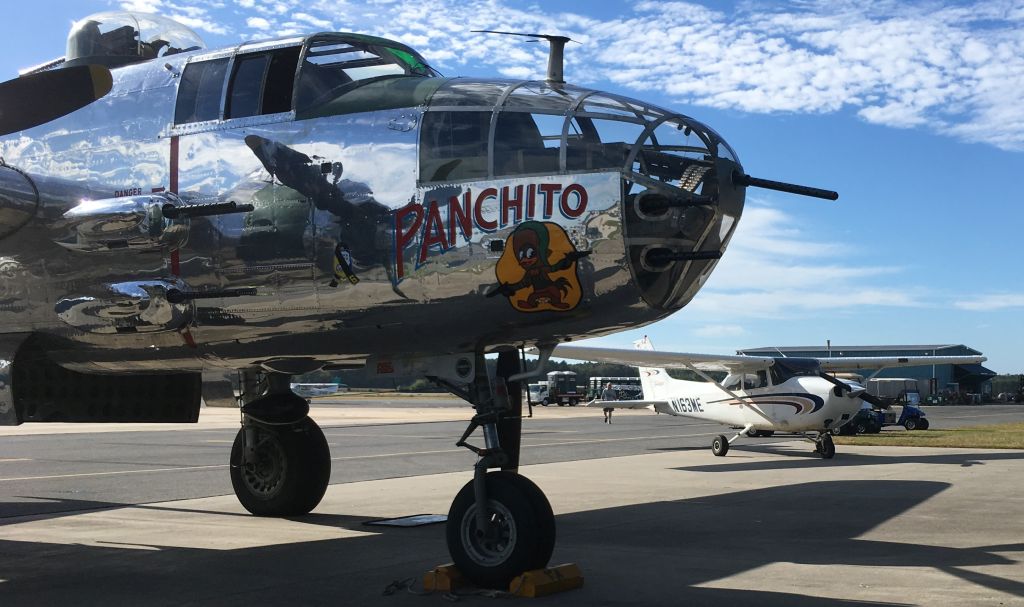 Thanks to the staff and volunteers at the Delaware Coastal Airport – who made everyone welcome and at home at this wonderful event.

Heading south from Georgetown, Steve was scheduled to give four presentations at the Virginal Festival of Flight, at Suffolk Executive Airport, Suffolk, Virginia.   With gorgeous weather for the flight down the eastern seaboard, we arrived at KSFQ and were royally welcomed by the airport staff and event volunteers.

The event collaborated with the Suffolk Peanut Festival, which resulted in a mixed crowd – from current aviators to those just plain curious.  The Virginia Aviation Council’s primary mission of Aerospace Education was well represented by a day packed full of aviation topics - including safety seminars, how to start a flying club, learning to fly, and others.  Aircraft flew in and out constantly at the event, with a high point being the fly-over and impressive break to landing by the Mooney Formation Group. N163ME also made another friend, an ME-262, that caused a lively debate on who invented the jet engine!

Again, the cross over between You Can Fly initiatives was impressive.  At least five people will  likely attend a Rusty Pilot seminar in the near future, several young people will start learning to fly, and at least one new flying club will be formed in Virginia.  It was also impressive to hear about the many grassroots efforts that are underway around the country in support of aviation.  An impressive example is the Williamsburg Aviation Scholarship Program (WASP), that is directly impacting the pilot shortage by providing 100 percent funding of flight training to selected high school candidates – all from direct donations.

Many thanks to the airport staff, organizers, and volunteers at this event, with special thanks to Danny Arkin, the Festival and Fly-In Manager.

With the Tampa Regional Fly-In bringing the 2017 series to a close on October 27th and 28th, we eagerly look forward to the 2018 AOPA Regional Fly-Ins that have just been announced!

The locations have been designed to provide gateways to explore the mountain northwest, high desert mountains, a cutting-edge center for the automobile and aviation industries in the Midwest, and a relaxed beach town along the Gulf Coast—all great family vacation destinations, and all strategically located within an easy flight of tens of thousands of AOPA members.

The two-day regional fly-ins will retain the in-depth workshops on Fridays before the main Saturday event. The all-day intensive workshops, which in 2017 included ground school for IFR proficiency, owner-performed maintenance, overwater and mountain flying techniques and survival skills, and aviation adventures, proved wildly popular with members.  “We are working on a new slate of workshops for 2018 that will offer hands-on experiences for pilots to improve their aviation knowledge, safety, and skills,” said AOPA Director of Outreach and Events, Chris Eads

In the September edition of Club Connector, we posed the broad question: “What is the wing configuration of your club aircraft?”

Here are the results:

Even with the fairly limited number of responses (29), we note that over half of the clubs that responded fly high wing aircraft – and we love the idea of a biplane club!   This pretty much tracks the general understanding that many clubs use C152 and C172 models. In coming months, we’ll ask about aircraft make, model, age of aircraft – and more!

The question this month is: “Thinking about the largest aircraft in your club fleet, how many seats does it have?”

Thanks for your participation in these quick surveys – they really do help us better understand the way that our network clubs operate – which allows us to provide better and more targeted help and resources.