Michael Bletsch and his wife love to take trips, especially to Lubbock to watch Texas Tech football. From the Houston area, it’s an eight-to-nine hour drive. By plane, it’s three hours. There was only one problem – scheduling an airplane to rent.

He looked at some Houston-area flying clubs but both had waiting lists to get in and they were 40 minutes to an hour drive from his house. So he said to himself, “You know, I could start something.”

During the oil downturn in the summer of 2015, Mike took a severance from his job giving him the time and resources to focus on picking what he felt was the perfect airplane to start the Aero on Demand flying club.

“My mission has been access. I didn’t want 30 guys to one airplane,” Mike said. “I wanted schedule availability.” What differentiates Aero on Demand is a small member to aircraft ratio and having what he describes on the club’s website as “luxurious, modern and well maintained airplanes with the latest panel technology.”

The club owns a 2002 Grumman AG5B Tiger and a 1975 Grumman AA5A Cheetah. Initially, the club was capped at 6 members per aircraft. However the club is about to add two more members, which will give it a 7:1 ratio, and it has a waiting list with five more potential members.

The Tiger and Cheetah are both four-seat, fixed-gear aircraft with a sliding canopy. The aircraft have a bonded aluminum wing and honeycomb fuselage eliminating the need for rivets without sacrificing strength. 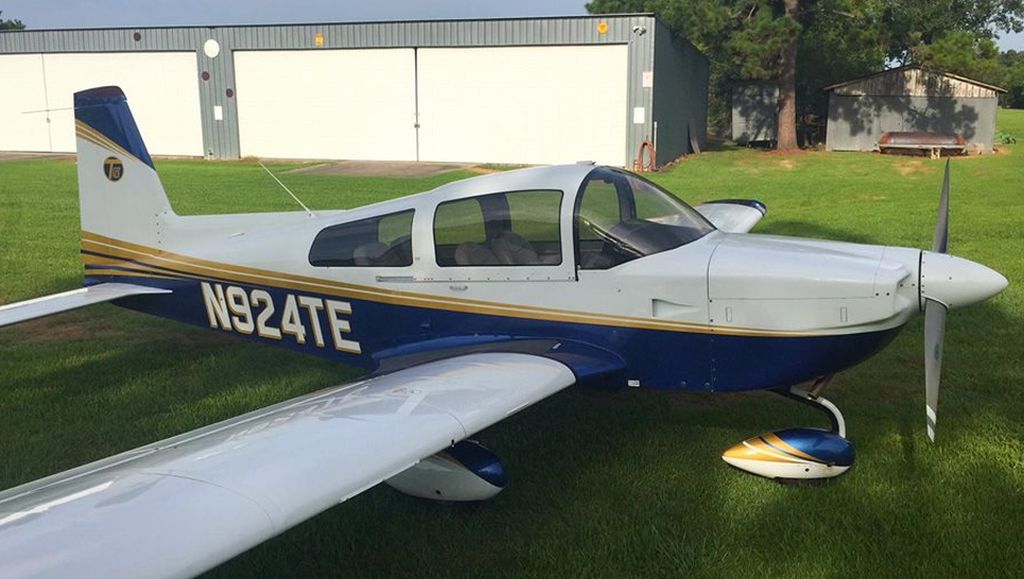 The main difference between the two models is the Tiger has a 180-hp Lycoming O-360-A4K and the Cheetah has the 150-hp Lycoming O-320-E2G. Three different manufacturers produced variations of these aircraft between 1975 and 2005. Of the 2,500 Tigers and Cheetahs that were manufactured, all but about 225 Tigers were built in the 1970s.

Before settling on the Tiger, Mike did some research. “If you really put pencil to paper and add up the performance you get with the Grumman, compare it to what you get with a Cessna. I studied,” Mike said. “I looked at a Cirrus SR-20, 172s, Pipers—[with a Grumman] you get a lot of airplane for your dollar.”

He also made cold calls to Grumman owners. He spoke to about a half a dozen owners and “the consensus was they’re reasonable airplanes, maintenance friendly and insurance friendly,” Mike said. The owners said what they liked best was the speed and efficiency. “What you get in nautical miles per gallon is very impressive,” Mike said.

He wanted to purchase a newer model Tiger, one of the 51 built between 2001 and 2005 because he wanted “something new and fresh.” He also figured if he bought a ‘70s model he would spend a lot to get it in tip top shape with new paint, interior, and modern avionics. 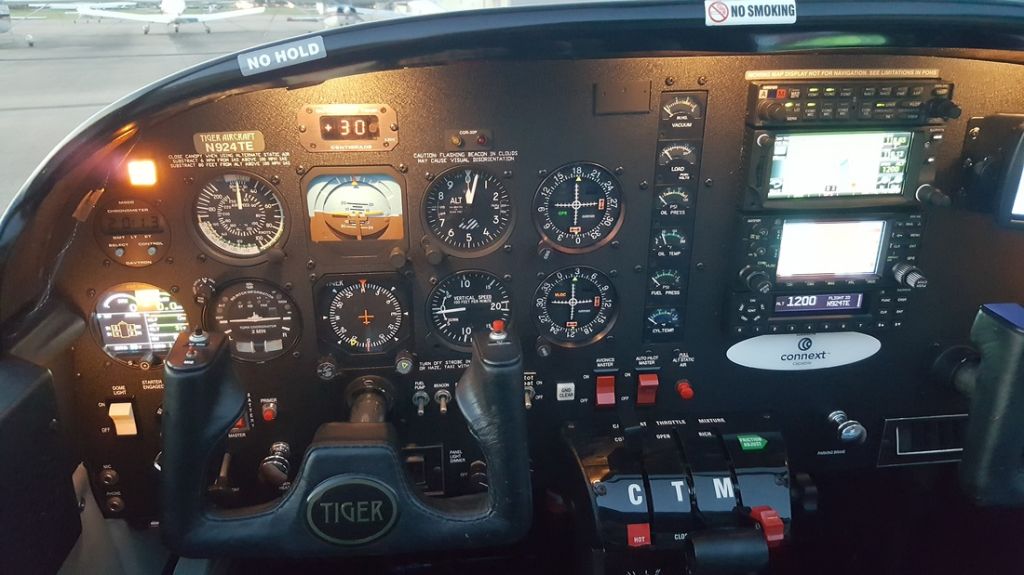 The club’s Tiger is well equipped with a full Garmin panel including a GTN 650 (WAAS), GNS 430, a GTX 345 transponder, which is equipped with ADS-B IN and OUT, and Garmin’s Flight Stream 210, which wirelessly syncs with the Garmin app, so flight plans can be loaded from your tablet into the panel mounted GPS through a Bluetooth connection. It also has an Electronics International CGR-30 engine monitor with digital CHT and EGT, and an S-Tec 30 autopilot.

The club’s second aircraft is a 1975 Cheetah, and Mike is spending a small fortune to make it one of the nicest Cheetahs around. He was able to purchase the aircraft for $15,000 from a motivated seller, and he’s putting about $50,000 into it. When it is finished in the next few weeks, it will have a similar paint scheme as the Tiger, but instead of being blue and gold it will be black and gray with a tan interior.

The first thing Mike did was overhaul the O-320 by putting in bigger cylinders and pistons. The “high compression upgrade” by Precision Engine, which has the STC on it, increases the engine from 150-hp to 160-hp. “You can really tell the difference on takeoff roll and climb,” Mike said, but it does not affect cruising speeds much.

However, Mike was able to find wheel pants to put on the plane (which is no easy task), and that will add a little speed, as well as dress the plane up a bit. “Putting the pants on will easily add three or four knots. And it doesn’t look like a farm airplane,” Mike said. “The pants are really going to make it pop.”

He’s also upgrading the panel with a Garmin GTN 625 (WAAS), which is basically the same touch screen GPS as the 650 but does not have a radio, the GTX 345 transponder, Flight Stream 210, and an ICOMM flip/flop radio. The Cheetah also has a factory installed Century 1 autopilot that will be coupled to the GTN 625 and the NAV/COM (VOR/LOC).

Diverse membership that likes to travel

With the focus on well-maintained aircraft that members can take on cross-country flights, the club requires members to have their private pilot certificate and at least 100 hours total time. “I didn’t want anybody banging the airplane around like a student would. In a 100 hours you should be trained,” Mike said.

The club also requires a 3-hour check flight with the club’s CFI, Andrew, who is a United 787 cptain. Mike has Andrew “stress them out up there. Pull the power in the middle of nowhere and see what they do. Andrew puts them through the ringer.” Mike talks to potential members to make sure they’re a good fit and will show them the aircraft, hangar, and facilities that include a pilot lounge with Wi-Fi, restrooms and shower.

Although the club is small, it has a diverse membership that uses the aircraft for a variety of longer trips, with several members taking the Tiger out of state. Ryan, a United Airlines captain, recently flew to Arizona, and Phillip flew to Kentucky to watch the eclipse in August. He also flies Pilots ‘n’ Paws missions, transporting rescue dogs about once a month. 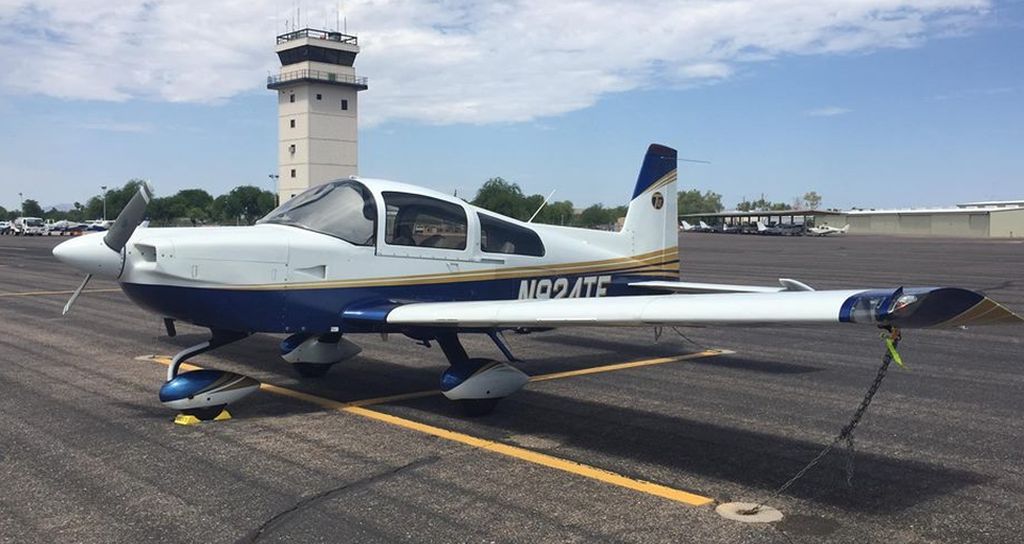 Alex is a programmer for ForeFlight who “gets up and goes places,” Mike said. And Ron has taken the plane to New Orleans. Like Mike and his wife, Jeff uses the plane to fly to college football games, but in his case, it’s so he can get to work—he does Division I officiating.

The club’s CFI, Andrew, is helping Ryan Klavan, a 17-year-old University of Houston student, get his instrument rating and commercial certificate as he works toward becoming a CFI and eventually an airline pilot.

Although the club is still relatively new, Mike is already looking to expand the membership and the fleet. “What this club is missing is a heavy hauler, like a 182 or fixed gear Lance or a Cherokee Six.” Mike said. “Say you want to take your four buddies somewhere, you can’t do it in what we have.”

In addition, a third aircraft will improve the availability. “If there is a maintenance issue, you’ve got two other airplanes,” Mike said. “It really frees things up.”

Of course, to support a third aircraft the club would need more members. On November 11, Aero on Demand is hosting its first open house. It will be catered by Mike’s favorite Mexican restaurant and it will be an opportunity for prospective members to see the aircraft, the facilities, and to meet the club members and their families.

In a short time, Aero on Demand has demonstrated that a club focused on providing modern, well-equipped planes with a low member to aircraft ratio is a model that works. While affordability is an important factor, sometimes providing access to aircraft when you want them and the flexibility to take the plane on a trip is what members want.