As mentioned in previous Club Connector editions, the Flying Clubs group, along with AOPA regional Ambassadors, have a goal to help start 30 new flying clubs in 2017.   With three new clubs recently becoming operational in New Jersey, Indiana and California, we are now up to 27 – and we have others forming nicely in several parts of the country.  We also have a goal to deliver 40 face-to-face seminars in the Maximum Fun, Minimum Cost series on how to start and how to benefit from flying clubs.   We’re optimistic that we’ll achieve these goals, both of which contribute greatly to the overall goal of increasing the number of active pilots in the USA.

By the end of 2017, the Flying Clubs Initiative will have helped form 65 flying clubs in its brief history.  Given that an average club has 12 members, this means that approximately 780 pilots are now flying as active members in new flying clubs.  This increase in activity generates hangar rental fees, fuel sales, proficiency and currency training, maintenance, and many other aviation-related businesses opportunities—all of which are contributors to vibrant and lively airport operations. The fact that clubs stimulate economic activity and improve the viability of aviation businesses, highlights the collaborative relationship that should naturally exist between clubs and the airports at which they are based.

There is no doubt that we are in this together – clubs need FBOs for fuel and maintenance services, schools need clubs to help alleviate rental-based scheduling headaches on the flight training fleet, and airport operators need engaged and active tenants, be they commercial (FBOs, schools, etc.), non-profit clubs, and individuals.

Collaborative and cooperative relationships don’t always come naturally, especially if an FBO, school or club has operated independently of an airport for years, and another tenant suddenly joins the airport and changes the status quo.  In such cases, and really in all cases, we must understand that collaboration is a combined responsibility.   If we don’t take it seriously, an airport operator has the right – delegated from the FAA – to bring parties into line with expected standards and operational behaviors.

We have seen a couple of such conflicts in the past few months. The FAA is quite clear that flying clubs provide services and opportunities for the enjoyment of its members, only, and that all members, by definition, must share equally in the assets, liabilities, and obligations of the club.  In the context of clubs, there is a line that must not be crossed between providing aviation opportunities to its members, and reaching out and offering services to the general public.

One example of this is the use of club aircraft for flight training.  Now, it is perfectly okay for members of a club to use club aircraft for purposes of individual flight training – but it is not okay for the club to extend that privilege to non-members, nor to try to work around the rules by offering lower-cost memberships to student pilots.  Flight schools are commercial operators and are held to higher operational rules and standards compared with flying clubs, which therefore adds to the cost of operations and hence the cost of services.  Let’s leave the business of commercial flight training to the schools and FBOs, while we enjoy the benefits of camaraderie and lower operational costs for our club members, only.

On the Tarmac in Tampa

It is the time of year where snow has already fallen in some parts of the country, prompting me to follow the tropical siren call of AOPA’s final Regional Fly-In of 2017 held in Tampa, FL. Nearly 5,500 attendees, including 339 aircraft also answered that call. They found themselves on an airport tucked against an active ship channel with line of sight to the nearby Tampa downtown skyline.

The Florida weather came through with balmy high 70’s, low humidity and easy breezes. Attendees had plenty to choose from with in-depth workshops on Friday followed by a Barnstormer Party with the band on the porch of the airport terminal, and attendees dancing on the tarmac below. 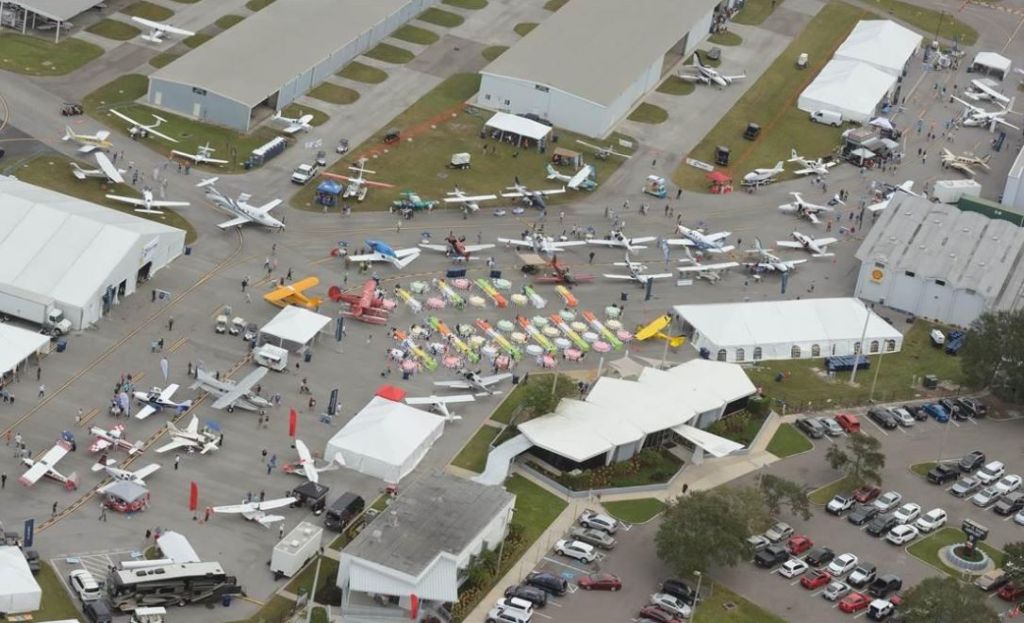 Those who chose to fly in and camp were treated to a beautiful setting right along the water. Peter O. Knight Airport (KTPF) offered a convenient layout for a walk amongst more than 50 aircraft on static display. There were nearly 60 vendors as well, offering all kinds of tempting ways to spend your aviation dollars. Saturday included a full schedule of seminars in four settings. There were prize drawings for those who collected their “passport” stamps from the various venues.

During the Town Hall, AOPA President Mark Baker recognized James McCague for flying the greatest distance to the event. James flew his C-182 just less than 1,000 nm from Ontario, Canada, and received an Appareo Systems Stratus ADS-B receiver for his efforts. The relaxed Florida vibe, the mild late-season temperatures and the graciousness of our hosts at Peter O. Knight made for a thoroughly delightful conclusion to this year’s AOPA Regional Fly In season.

More than 255 high school educators and administrators gathered from 40 states in Fort Worth, Texas, on November 6 and 7, to learn how to start or improve their high school aviation STEM programs.  Participants learned about how to build an airplane at their school, and also aviation 101 for the non-pilot educators.  As part of the event, educators were able to go on tours at the American Airlines pilot training facility to see the flight simulators and emergency training area.  Several representatives from companies such as American Airlines, Boeing, UPS, NASA, Alaska Airlines, and Envoy Air, took part.  During the symposium, more information was shared about AOPA’s newly developed high school aviation STEM curriculum.  This curriculum is currently being field-tested in 29 high schools across the country and will be available at no charge to high schools in the fall of 2018.