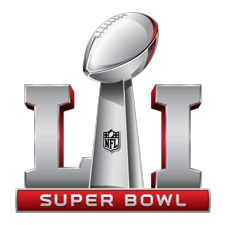 When it comes to the Super Bowl, the commercials and how you tailgate are often more interesting than the game. While that may not have been the case for Super Bowl LI played at Houston’s ERG Stadium on February 5, one flying club put on a party that was hard to beat.

The motto of US Flight Club (USFC), based at Houston Executive Airport (KTME), is “If our members are not spoiled, we are not doing our job.” On Super Bowl Sunday they did their job, but instead of taking care of their members, the club members spoiled the flight crews of all the aircraft that came in for the big game. 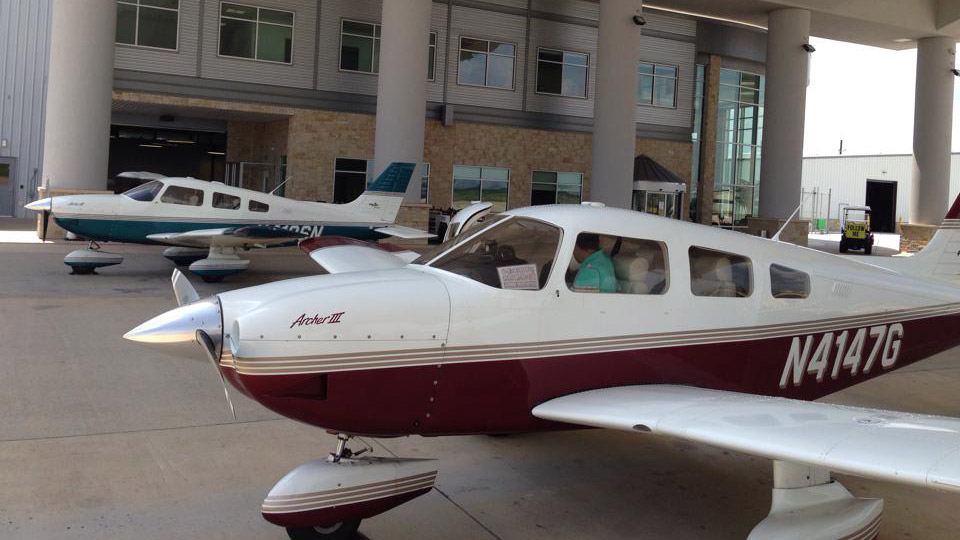 The club currently has 40 members and three Piper Archers IIIs all built after 2000. Each aircraft has an advanced Garmin GPS system with an autopilot and, most importantly in Texas, air conditioning. They are in the process of looking for a late model Saratoga to acquire.

There is a non-refundable initiation fee of only $200, monthly dues are $195, and the Archers rent for $130 per hour, wet. The club offers modern, well-maintained and well-outfitted aircraft. They are based at an airport that was built about 10 years ago with an FBO that features state-of-the-art amenities including a conference room with wi-fi access, pilot’s lounges with leather seats and large screen televisions, and shower facilities that members have access to. There is even valet parking. In short, US Flight Club members get executive style treatment.

Prior to the Super Bowl, the FAA and NFL estimated an additional 1,300 to 1,600 aircraft would be coming to Houston. Reservations were required for arrivals and departures from Thursday through Monday of Super Bowl weekend at 21 Houston-area airports, including Houston Executive.

Three months before the big game, Houston Executive Airport Manager Andy Perry told the flying club that incoming jets would be parked on every available inch of the ramp, including in front of the hangars where US Flight Club houses its aircraft, meaning there would be no flying that weekend.

The club’s response was no problem. “Andy came to me and said, ‘All the planes are going to be blocked because of all the jets.’ I said, ‘OK, why don’t we provide lunch for the stranded pilots,” Club Vice President Harry Johnson said. The airport offered to provide the food and the club provided the labor.

About half of the club’s 40 members came out on Super Bowl Sunday, divided into three shifts beginning with prep work at 9 am with the last burgers being served around 7 pm. The BBQ was set up on the patio outside of the FBO with a large banner with the club’s name hanging on the building windows next to picnic tables where crews and airport personnel could eat. 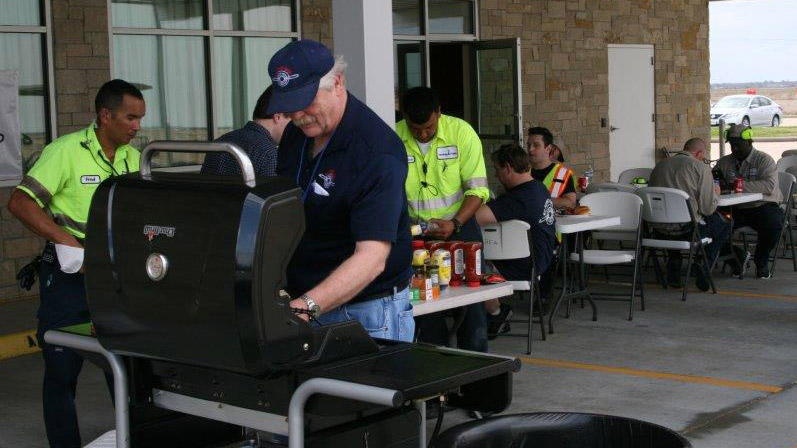 The menu consisted of hamburgers and hotdogs with all the fixings, soft drinks, and desserts, which included what Harry called, “Houston Executive’s famous cookies” that the FBO, Henriksen Jet Center, provides to guests every day.

“It wasn’t fancy, but the food was top of the line,” Harry said. “We cooked everything. The poor linemen were running ragged. We were feeding them and the tower personnel too. We were going back and forth to the tower delivering lunch and dinner.” 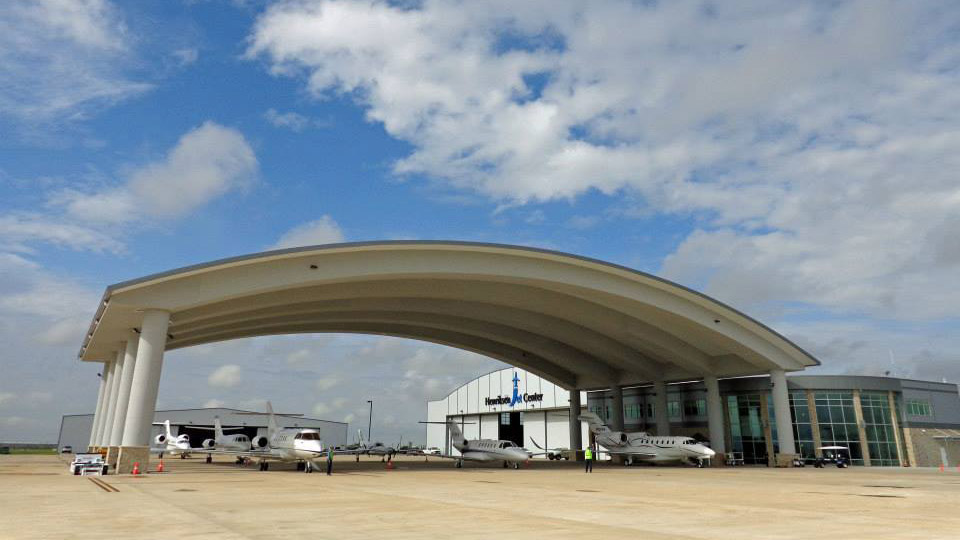 Crews often stay at the airport during the game doing their flight planning and preflight checks because many of the Super Bowl attendees want to fly home immediately following the game. The FBO has two large screen TVs where crews could watch the game.

Having food provided by the club meant flight crews didn’t have to leave the airport, which reduced the need for courtesy cars or rentals. “When you have 60 crews, you don’t have 60 cars. They’re stranded,” Harry said. “There are not enough crew cars for them to go all over the place to different restaurants. We took care of that.”

Harry’s favorite part was meeting the different crews and the hangar flying that took place. They had aircraft fly in from Canada, Mexico, California, Colorado, New York, Pennsylvania, North Dakota, and Utah, just to name a few. 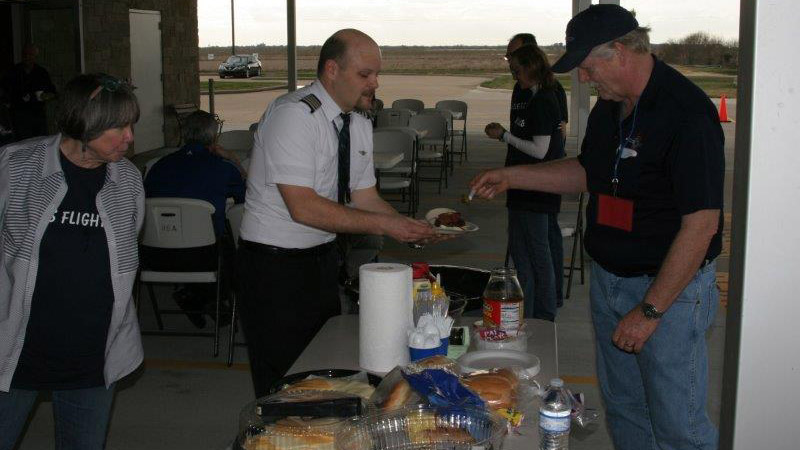 “What amazed me, crews would come out there and ask how much do we owe you and we’d say nothing, this is for you. They were so appreciative of it. A lot of them were expecting to pay,” Harry said. “We would tell them, ‘No this is free, this is for you.’ Boy they loved that. Then the conversation starts, finding out their history, how they started flying and how they got into corporate jets. That was the most fun part, meeting the crews.”

The club made T-shirts for members to wear on game day so the club could get some exposure and Harry estimates they provided 300 to 400 meals throughout the day.

“Crew after crew came up to us and thanked us for providing a meal for them. They were all stranded at TME while the bosses were at the Super Bowl,” Harry said. “Andy's crew and the tower crew said it really boosted moral. They worked so very hard to make the day go smooth and we at USFC can say that we played a big part in today's success.” 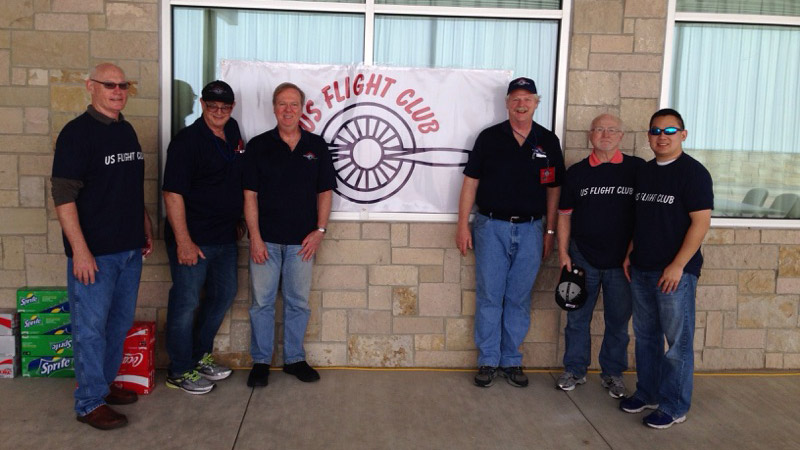 “I greatly appreciate the Houston Flight Club volunteering to BBQ hamburgers and hotdogs for the flight crews on Super Bowl Sunday,” Airport Manager Andy Perry said. “The flight club showed flights crews from around the world what KTME and Houston Hospitality is all about.”

Model for other clubs

What US Flight Club did was a simple way to get exposure and build a stronger relationship with the airport and FBO, and it’s a model other clubs can use as well. And it can be a recruiting tool as well.

Whenever there is a big event like the Super Bowl, the NCAA Final Four, Kentucky Derby, large auto races such as the Indianapolis 500 or a major NASCAR race, the FAA issues NOTAM’s with specific operating procedures.

Or perhaps your club is near a college that has alumni that fly in for football games during the fall. There are many events that lend themselves to increased traffic at local airports and your club could do a similar event to help get the club known in the community, while developing a good relationship with airport operators.

Harry’s advice is take the initiative and go to the management and say, “Look, we know we won’t be able to fly because of all the jets coming in. We want to help you.”

The airport wants to provide a good experience for the crews and the passengers because they see it as a business opportunity. “Six months down the line when the boss says lets go back to Houston, where are we going to go? Let’s go to Houston Executive, they really take care of us,” Harry said. And that is in part because of your club, and that helps get the management involved in liking your club.

“The biggest thing is to work with your management,” Harry said. “They’ll love it. Some of the bigger places don’t like piston-poppers, but if you can build a good relationship it’s gold.”