Not Your Usual Club Taildragger

There are many benefits of adding a taildragger to your fleet—it offers members access to an airplane they probably can’t rent locally, likely has low operating costs, and provides a fun and challenging aircraft that enhances stick and rudder skills. Most clubs with taildraggers operate J-3 Cubs or something in the Aeronca Champ/Citabria family. The Western Antique Aeroplane and Automobile Museum (WAAAM) Volunteer Flying Association (WVFA) based in Hood River, Oregon offers something a little different – a four-seat Piper Pacer PA-20/22.

The Pacer is a conventional gear, four-place short-wing Piper that was later developed into the better-known Piper Tri-Pacer PA-22. About 1,100 Pacers were produced between 1950 and 1954, while nearly 9,500 Tri-Pacers were produced between 1950 and 1964. WVFA’s aircraft is actually a Tri-Pacer that was converted to conventional gear. Several of the club members shared their experience flying this taildragger.

Piper Pacers are one of the more affordable four-place aircraft available, with a purchase price between $30,000 and $35,000.

WVFA charges $45 an hour Hobbs time, dry and fuel at Ken Jernstedt Airfield Airport (4S2) where the club is based is currently $3.99 a gallon. The plane has a 135-hp Lycoming O-290 with a fuel burn of about 7 gph. That means it’s less than $75 an hour to fly this vintage taildragger.

There isn’t much unusual about maintaining a Pacer, however there are two ADs on the struts. One has to do with the strut forks at the fuselage and the other is related to the strut itself. Otherwise, it’s “just the usual for an old aircraft—it’s a fabric covered aircraft so you have to make sure your fabric is good,” Club member and WAAAM Director of Restoration Jay Bell said.

It’s best to keep it in a hangar to help protect the fabric and long-term, you have to plan for fabric recovery and fabric repair. Depending on how much exposure it has to the sun, it will need to be replaced generally about every 25 to 30 years.

The landing gear has bungee cord shock absorbers, so it’s important to check the tracking to make sure the gear doesn’t have toe in or toe out. “It got about six inches taller when we put the new bungees on. It bounces a bit more now, but really when the bungees were stretched out we got a lot of toe out,” Jay said.

One thing the club has to manage is the charging system because the Pacer has a generator, not an alternator. “Most of the flying we’ve been doing is pattern work, not at full throttle,” club member Rick Kemper said. “It’s not at high enough throttle settings to get the generator to kick on and kick in enough of the time.”

Therefore the battery isn’t getting much of a charge. So the club got a solar 12-volt battery charger that has really helped with starting the aircraft. “The airplane hadn’t flown for two months through the winter and I went out and it fired right up,” Rick said.

The charger has a plug that they were able to hardwire into the battery. When they’re done flying, they’ll take the solar panel from the baggage compartment and stick it on the glare shield and plug it in and the battery will be topped off, compensating for any drain that might happen.

WVFA is fortunate that the museum employs a director of restoration who has experience working on antique aircraft. But if a club is interested in owning a Pacer, finding a good mechanic that has tube and fabric experience and expertise is important and could be a little more challenging to find than someone used to working on 172s or Cherokees. 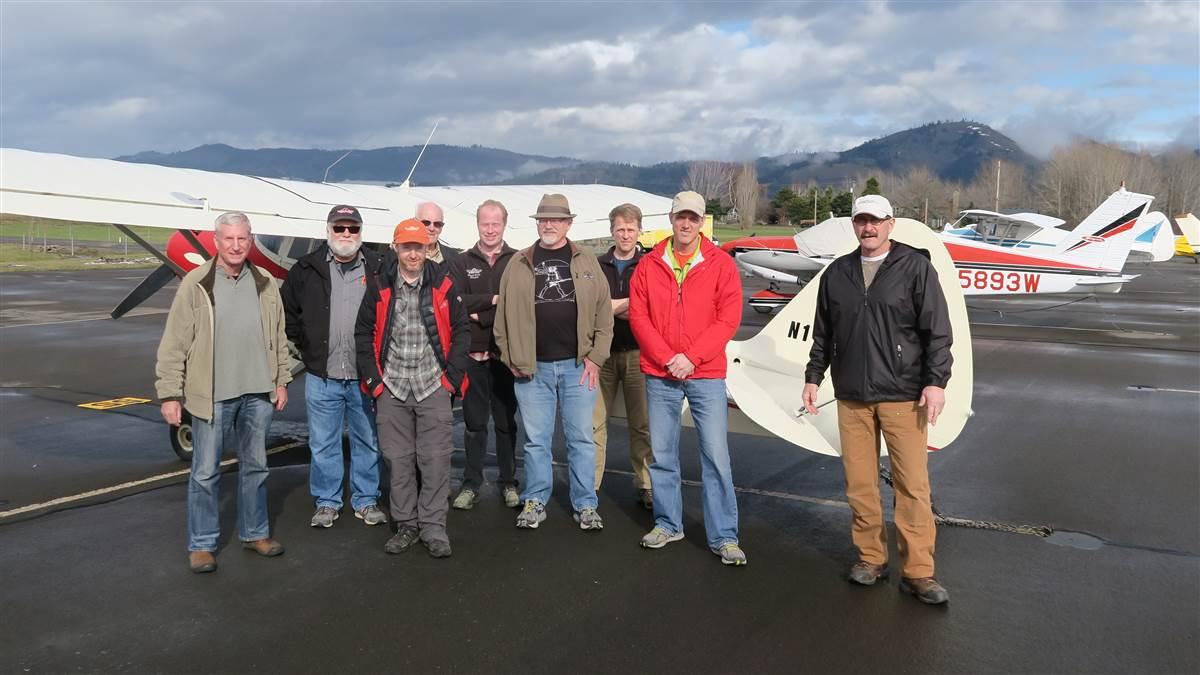 The insurance company didn’t require specific minimums for pilots, but the club did provide its bylaws and a list of pilots and their flight experience. Pilots must complete a thorough check ride before they may solo the aircraft, which is detailed in the club bylaws, and that may have helped keep the premium low.

The club’s primary use for the Pacer is tailwheel endorsements to help train and keep pilots current for the Western Antique Aeroplane and Automobile Museum (WAAAM). However, it does use the plane for primary instruction as well. Jay Bell is the club’s first student pilot doing his primary training in the aircraft.

It should be noted that the Pacer’s short fuselage does make it a bit of a handful on the ground.  “They’re short, they’re squirrelly. They want to go left or right off the runway, not straight,” Club CFI Mark Stanfield said. “That’s kind of the fun part, that’s kind of the challenge. They’ve got huge control surfaces so they’re super responsive. And it’s light, so no matter how seasoned you are, the first couple times in it makes you feel like a beginner.”

Because of the challenge the Pacer presents on the ground, the club prefers to use the airport’s 1,500-foot grass runway for landings to help build the confidence of the pilots. “The grass is nice for slowly building that confidence and once you’ve got that confidence move over to the pavement,” Jay said. “You’ve just got to dance on it more. The second it starts going you’ve go to correct it and recorrect it.”

Since there aren’t many flight schools that offer tailwheel endorsements, any taildragger can be an attractive marketing tool. One potential drawback is finding instructors who can teach in it. 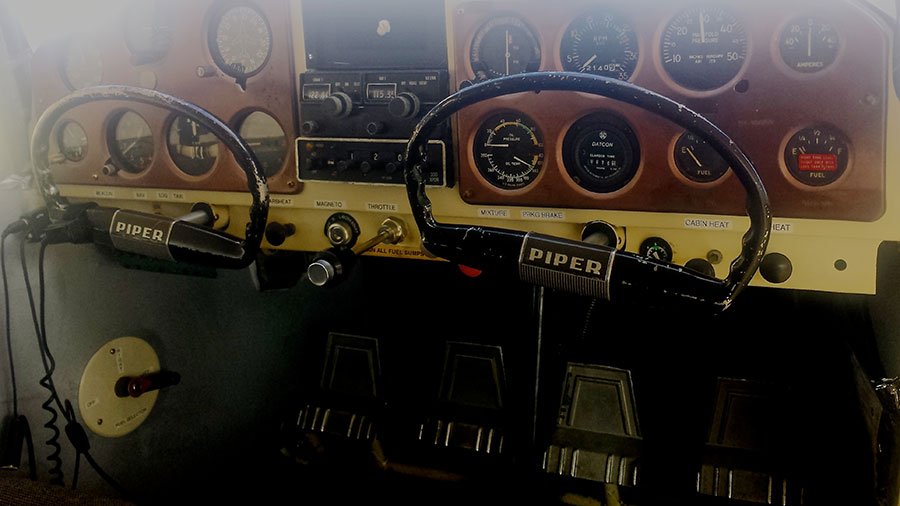 WVFA hasn’t done any cross country flying in its Pacer yet, but they are likely to do so soon. “We restricted it to local flying until we got some time on the airplane,” WAAAM volunteer and club member Dayle Harris said. “This thing came out of the museum after sitting, and we didn’t want it to go out on its first cross country and break down.”

When they do stretch the Pacer’s legs, it won’t get you anywhere too fast, with a cruise speed of about 110 mph. It will fly for about four hours with 36 gallons of fuel capacity, and a 7 gph fuel burn. The useful load is 600 pounds with full fuel, meaning you won’t be able to fill the plane with four adults, unless they’re small.

That said, flying with two or three people isn’t a problem. “I weight 200 pounds and my buddy weighs 240, and with full fuel it really performs pretty darn good,” club member Rick Kemper said. “It climbs, it really does.”

Rick did note the cabin is a little cramped for taller pilots, and that “after about an hour and a half, two hours it’s time to get out and stretch. It’s not super comfortable.”

Despite it’s rather pedestrian pace and a cabin that wasn’t designed for the size of today’s pilots, Rick is eager to take the plane on a trip. “I want to cross country this Pacer, I don’t care,” Rick said. “It’s going to be fun.”

When asked to talk about whether the Pacer is fun to fly, there was a noticeable silence on the phone. “Are you all just sitting there smiling at each other?” I asked. “Yes we are,” came the response.

“It’s a super easy flying airplane, but the ground handling is just, there is a sigh of relief when you rotate,” Ken said. “From there on out it’s really an easy flying airplane. It is fun. You can get in and out of places that I’m sure you can’t with other airplanes. That’s something we’re looking forward to.”

The Pacer has huge control surfaces, which make it quite responsive, and a slow stall speed makes it hard to get in trouble.

The Piper Pacer might not be the first aircraft a club would consider if it’s looking for a tailwheel aircraft, but it shouldn’t be overlooked. The Pacer offers a conventional gear option with four seats and good performance at a reasonable price. It can be used for primary training or tailwheel endorsements, and has enough fuel capacity and useful load that taking it for a trip isn’t a problem, as long as you have a little time to get there.

Like any tube and fabric aircraft, it will need a little extra TLC and its challenging ground handing characteristics demand pilots are well trained before venturing out on their own. But once in the air, the large control services provide a nice responsiveness and when you land, the Pacer certainly has ramp appeal.