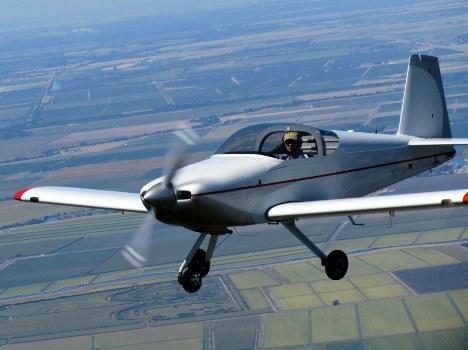 As the annual pilgrimage to Oshkosh begins (or maybe you’re already there!), we’ve got experimental aircraft on our minds, so we thought we would run an article on the RV-7A from our archives. This article originally ran in February 2014 and has been updated to reflect current figures.

Vans Aircraft are known for their speed, performance, affordability, and for being fun. That’s why their owners are struck with a condition known as the RV grin. Although there are thousands of RVs flying, you won’t find many in flying clubs. FAR 91.319 prohibits an experimental aircraft from being operated for compensation or hire, and further tells us that experimental aircraft cannot be leased. The good news is that non-profit flying clubs - in which all members co-own their airplanes - normally fall outside of this definition (for more information on operating an experimental in a flying club, see the May 2013 Club Connector Question of the Month).

If your club is equity based - like the Concord Flying Club (CFC) in Northern California - each club member is a co-owner and FAR 91.319 doesn’t apply, so you could operate an experimental aircraft in your club.  Jim Casper and Kevin Hanrahan shared CFS’s experience operating an RV-7A. 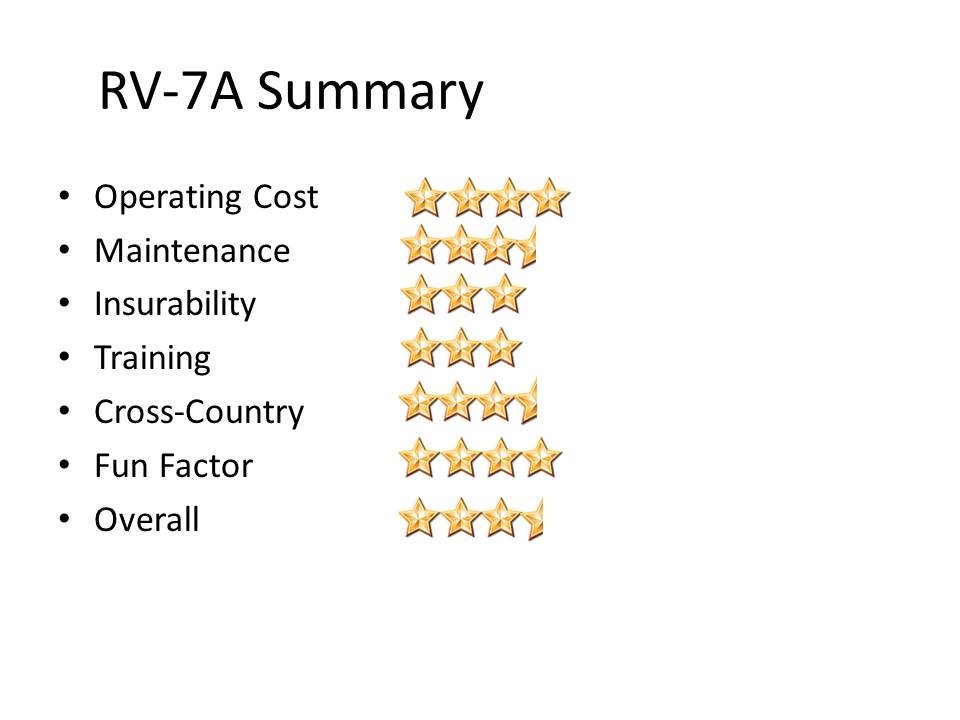 Why did Concord add an RV-7A to its fleet, which includes a Bonanza A-36 and a C-182? “In a word: Cost,” Kevin said. “The capital cost and operational costs made the argument.”

CFC also considered a Cirrus SR-20 when it was looking to replace a Cessna 172 that had been in the club for 50-years. The Cirrus “would have been over twice as much money.”

“The RV-7 is our low-end aircraft, but it’s very fast,” Jim said. “It’s so economical to fly. It flies a little faster than our Bonanza, but it goes for about a third of the cost.”

Maintenance (3.5 stars)
Because it is an experimental, the club can do its own work on the aircraft. Club members perform standard maintenance and the local FBO provides supervised maintenance for things members can’t do. It is a lightweight homebuilt and Jim said the heavy usage has led to more repairs than the other aircraft.

Kevin noted, “Your choices for avionics are much wider and much cheaper for experimental than for certified. That’s a big advantage.”

If you have a non-equity club, insurance companies won’t write a policy on an experimental. Concord was initially concerned about getting insurance, but as an equity-based club, they found it was no problem. Kevin said they expected the cost to be double, but found it was the same as insuring a C-172 of the same value. Jim did say the insurance company would not write a policy for a conventional gear RV, which is why the club chose the RV-7A, with a nose wheel.

“We have a bigger problem insuring our Bonanza. Some insurance companies won’t insure clubs with Bonanzas as a policy,” Kevin said. “The combination of six seats and a retractable gear is a bigger problem for insurance than an experimental would be. I was a little surprised.”

CFC doesn’t accept student pilots as members, but if it did, Kevin said the RV would not be his first choice of training aircraft. It’s a fast, nimble aircraft that probably would be a little too much for most students. “I think you could do it if it had a fixed pitch prop, but not in our RV” - which has a constant speed prop. They are not that hard to fly, but things happen faster.

It is well suited for advanced maneuvers, and is rated for aerobatics. The canopy provides good visibility and the RV community is known for its formation clinics, which Kevin and other members have participated in.

With a cruising speed around 200 mph at 75 percent power at 8,000 feet, and a low fuel burn, the RV-7A is a good plane to fly on a trip. The plane is equipped with a Garmin GNS430 and a TruTrak autopilot, adding to its cross-country appeal. Kevin said some members use the plane as a cross-country platform flying to places like Salt Lake City or all the way to Oshkosh. “The operating cost is not even $100 an hour (in 2014). It’s cheaper than driving a car,” Kevin said.

But remember, it only has two seats and a useful load of about 450 pounds with full fuel (42 gallons), so you’re going to have to pack light - and it’s not as comfortable as the roomier Bonanza. Kevin said he generally keeps his trips to three and a half hours or less as the comfort and useful load are not the plane’s strong point. “Because it is so economical, members will take trips in it, by themselves or two people,” Kevin said. “But there’s not a lot of room for bags.”

“I’m sure somewhere there is a more fun plane to fly, but personally, after flying the RV, I don’t really enjoy flying anything else,” Kevin said. Based on club usage, other members in the club feel the same way. So if you ever stop by Concord and wonder why the members are smiling, it’s probably just the RV grin.

If you’re looking for a fun, fast, affordable, and high-performance aircraft, there are few better than an RV. But as an experimental, the FARs prevent non-equity clubs from considering one, which lowers its overall rating just a touch. For an equity club, it is an intriguing option to add a little spice to your fleet.