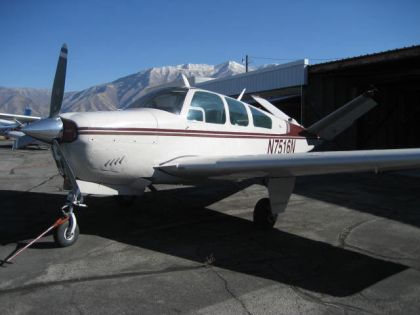 Beechcraft’s iconic V-tail Bonanza debuted in 1947 and was produced until 1982. It’s sure to attract attention wherever it goes, and the Springville Flying Club’s Bonanza has certainly gone to many places. It’s fast, comfortable, less expensive than the larger A36 Bonanza, yet still has a good useful load, making it a solid cross-country aircraft at an affordable price. It can also serve as a complex trainer for members working on their Commercial rating. Club Secertary Larry Forsey shares Springville Flying Club’s experience with the V-Tail Bonanza. For more information on the V-tail Bonanza, see the January issue of AOPA Pilot.

Operating Cost (4 stars)
The purchase price on a V-tail Bonanza ranges from about $22,000 for a 1947 model to $133,000 for a 1982 V35B, according to Vref, the aircraft valuation service. Cost will vary depending on the engine, avionics and total time, but V-tail Bonanzas are less expensive than the larger A36, making it a reasonable option with similar performance.

What you’ll get is a comfortable four or six-seat aircraft that cruises at 175 knots while burning 15 gph with plenty of hauling capacity. The hourly rate for Springville’s Bonanza is $160, Tach time wet.

Maintenance (4 stars)
The V-tail Bonanza is a proven design that was manufactured for 35 years. It has a Continental IO-520 and there are few surprises. Early variants were prone to structural failure, which prompted an airworthiness directive that strengthened the tail spars. Larry also said the club did have a costly repair to the “ruddervator” – it is made out of magnesium instead of aluminum and it had to be sent out to be fixed, increasing the cost and the time out of service. Other than that, the only other thing that makes it a little more expensive to maintain is that it has retractable gear, meaning the annual will cost more than a comparable fixed-gear aircraft.

Insurability (3.5 stars)
Larry said insurance runs a little more than the 172, but that’s expected with a complex, high performance aircraft. However, Springville had a carrier that no longer wanted to provide coverage for a high performance aircraft, so the club had to switch. “There aren’t a lot of options, but they have been fair with the premiums,” Larry said. “We haven’t had any problems so we have haven’t had any insurance raises for years.”

The insurance company requires club members to have a minimum of 250 hours PIC and then 50 hours in type and 5 to10 hours of instruction in the actual aircraft to get checked out, Larry said, which is fairly standard for retractable aircraft.

Training (4 stars)
For a commercial certificate, you need access to a complex aircraft—retractable gear and a constant speed prop—making the Bonanza a good choice for advanced training. And with a 300-hp engine pilots can also get their high performance endorsement. Over the years, there have been a few club members that have used it to earn their commercial tickets. There is one caveat – it has a throw-over yoke, meaning it is not dual control. This shouldn’t be a problem for a licensed pilot working on an advanced rating, but some instructors may prefer the security of a second yoke.

Larry noted that it is “a very forgiving airplane,” however, “you do have to fly the airplane. Without a vertical stabilizer it does have a tendency to sway back and forth. If there’s any wind or turbulence you have to use your feet a lot to stabilize it.” 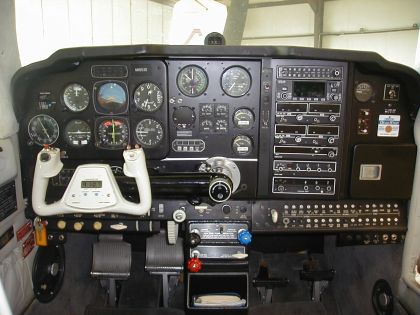 Cross Country Travel (4.5 stars)
This is where the V-tail Bonanza shines. “It’s the best aircraft I can think of for cross country,” Larry said. With a cruise speed around 175 knots and a fuel burn of about 15 gallons per hour with 80-gallon tanks, it provides a nice balance of speed and endurance. “It has six seats, but the back two are for children or luggage,” Larry said. “Those two back seats don’t hold a lot.” However, it should carry four adults and enough fuel to get you where you’re going without a problem.

Bonanzas have a reputation for being comfortable, quiet and smooth, making those longer flights even more enjoyable. The club’s Bonanza has the throw-over yoke providing the right seat passenger lots of additional space.

Springville members like to travel and have flown the Bonanza all over the western United States, and have even flown to Canada and Mexico in the plane. Members have flown as far as Oshkosh, Texas, Seattle, and Cabo San Lucas. Larry used to use the plane to visit his son in Albuquerque, New Mexico. The flight would take about 2 hours and 20 minutes from Utah, a much better option than a 10-hour drive.

Fun Factor (4 stars)
A Bonanza has always had ramp appeal, and with the distinctive V-tail it gets noticed no matter where you go. But good looks alone don’t make an airplane fun to fly. “They are responsive, it’s one thing I like about it,” Larry said. “I really like how it handles. I always felt really confident flying it.”

Overall (4 stars)
The V-tail Bonanza is roomy, can carry a large load, and get you where you want to go quickly with a reasonable fuel burn. Besides being well-suited for cross-country flights, it’s a solid commercial trainer as well. For a club looking for a complex, high-performance aircraft that can be used for training or travel at a reasonable price, the V-tail Bonanza is a distinctive option.

“The thing I like about it is it gets you where you’re going in a hurry and it’s an impressive aircraft when you taxi up,” Larry said. “The Bonanza has always been a status aircraft. It’s just a nice airplane to fly.”