The Aircraft  Spotlight feature looks at an airplane type and evaluates it across six areas  of particular interest to flying clubs and their members: Operating Cost,  Maintenance, Insurability, Training, Cross-Country, and Fun Factor. 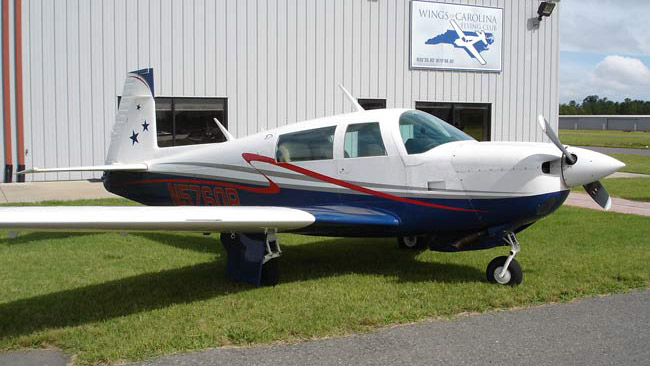 Like a sports car, the Mooney M20J sits low to the ground. Its smooth curves and forward swept tail give it a distinctive look that’s hard to miss on the ramp. Wings of Carolina, one of AOPA’s Pathfinder Flying Clubs and a recipient of AOPA’s 2013 Flight Training Excellence Awards Honor Roll has 350 members and a fleet of 13 aircraft, including three Mooney’s – two M20J’s and a Mooney 20S. The aircraft serve as a complex trainer for members working on their Commercial rating, and provide a fast, well-equipped platform for cross-country flying. In early 2014, then-President John Gaither shared Wings of Carolina’s experience with the M20J.

It’s fast and it’s fuel-efficient. John usually flight plans 135 knots indicated with a fuel burn of 9 gph, but Mooney Aircraft Pilots Association has performance specs showing a cruise speed of 160 knots true with a fuel burn of 11.5 gph. Flying at 55 percent power, you can lean it out to burn under 8 gph, John said.

Wings of Carolina employs two A&Ps and does its own maintenance, so John didn’t have figures on maintenance costs. With retractable gear, an annual will cost more than a comparable aircraft with fixed gear, but its Lycoming IO-360 is a common engine so most mechanics are familiar with it and parts are available.

However, John noted there are a number of trade offs that Mooney made in designing the plane for efficiency, which resulted in some maintenance challenges. For instance, the cowling is very tight and to change the landing light “you have to take both the upper and lower cowling off in order to get to it, so it’s an hour job,” John said. “There are a lot of quirky things that can make maintenance more challenging.”

Another problem they have had is getting some parts. Since Mooney stopped production, “some parts are extremely difficult to get.” With Mooney resuming production, John is hopeful this issue will be resolved.

Wings of Carolina hasn’t had any trouble insuring its Mooney’s and maintains a very good relationship with its insurance broker resulting in competitive rates. The insurance company doesn’t have any currency requirements for the aircraft, but the club requires a pilot with an instrument rating to have 200 hours to fly the aircraft. If the pilot doesn’t have an IFR rating, that number increases to 300 hours.

The club also requires anyone who has less than 200 hours in type, to take a six-month check primarily for landing technique. “The Mooney is a little tricky to land. If you don’t control your speed they will land long,” John said. “Because they don’t have oleo struts, they just have essentially rubber donuts absorbing the shock of landing, if you don’t land smoothly they are prone to pilot induced oscillation, which can result in a prop strike.”

For a commercial license you need access to a complex aircraft—retractable gear and a constant speed prop—making the Mooney a popular aircraft for advanced training. John said at any given time there are about 10 members working on their commercial ratings. The club does not employee instructors, but it has a list of approved instructors with whom members can fly, and it holds one commercial ground school each year.

Mooney’s have a reputation for getting you where you want to go quickly and efficiently. The M20J holds 64 gallons, so it has a range of about 700 miles with a useful load of about 800 pounds or two adults with bags.

John said it’s an easy aircraft to fly, and Wings of Carolina keeps its planes well equipped—they all have WAAS GPSs, onboard weather, dual VORs, engine monitors, fuel flow, and autopilots. “Those things make it in my opinion a very good plane for cross country flying,” John said. “Plus it’s fast. It’s the perfect plane for the under 400-mile trip.” Although he was quick to add a number of pilots have flown Mooney’s around the world (with ferry tanks of course).

It’s a fun aircraft, with sleek lines. “I think every pilot likes a good looking aircraft,” John said. Calling a Cessna 182 more like a station wagon, he said, “The Mooney has a sports car appeal to it, and that’s one of the reasons why people like it. It’s fast, it’s quick and it’s maneuverable.”

If your club is looking for a good cross-country performer with reasonable operating costs that can also serve as a trainer for pilots working on their commercial rating, the Mooney M20J fits the bill. Its aerodynamic lines, distinctive look and sports car appeal will definitely attract attention while serving two popular missions of many flying clubs.